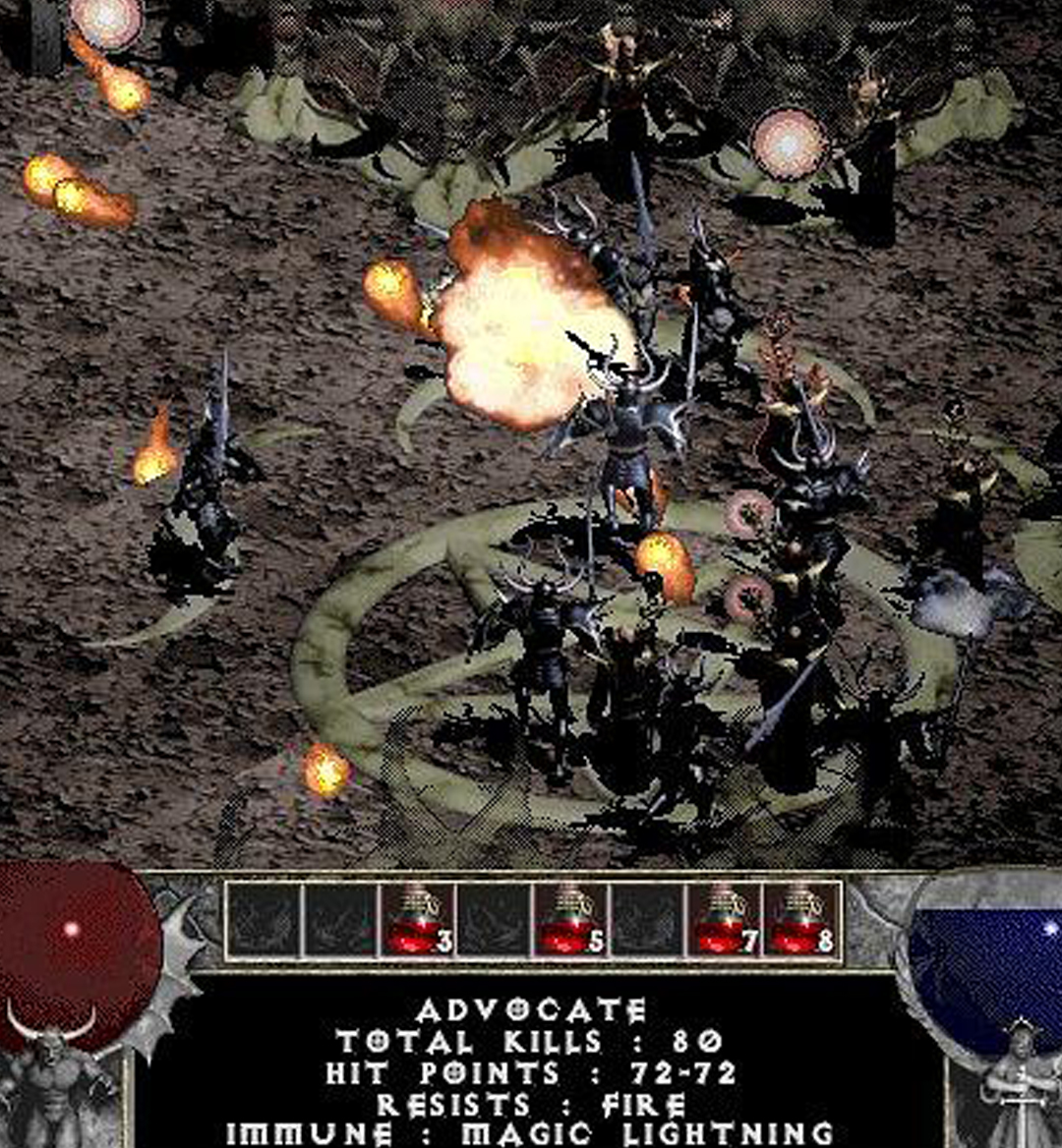 The start of November marked a year since Diablo IV was first announced at BlizzCon 2019 and with everything going on in the world, it’s been a long wait since. While you wait for Blizzard Entertainment’s new offering, you might have replayed the Diablo series a few times. If you’re sick of it, here’s some good news for you.

We’ve compiled a list of 15 games like the Diablo series. There are games that borrow from the customization elements, hack and slash games where looting is key, and games whose atmosphere will give you nostalgia. But for whatever reason you love Diablo, there’s something here for you.

Bastion is an action-RPG developed by Supergiant Games and published by Warner Bros. Interactive Entertainment. Where it really shines is the action, storytelling, and gameplay, leaving something to be desired in terms of looting and character classes. In the 2D, hand-painted art style, isometric game, players control The Kid as he maneuvers through fantasy worlds like cities, bogs, and forests, defeating enemies of all kinds. There’s also a narrator who does voiceover, telling us about a character’s backstory, which was added to avoid players having to read the text. It’s a great idea that’s executed pretty well and means you never feel too alone.

An isometric hack and slash game created by Thing Truck, Book Of Demons is like Diablo in that looting and upgrading you and your character’s equipment is key, but the premise is entirely different. This game is actually a cross between a dungeon crawler and a dueling card game, a hybrid that it pulls off really well. Players will need to collect the right cards to strengthen their deck which will help them in battle. There are three types of cards: items, spells, and artifacts, which all have different uses. The character classes here are Warrior, Mage, and Rogue.

Although the Borderlands series is unique to Diablo in its aesthetic and tone of gameplay, it does share many elements, namely fighting through hordes of enemies who drop loot that you can use to level up. For those who want something more similar to Diablo in every aspect, this might not be the one for you, but if you want some pieces of Diablo in a different game, we can’t recommend Borderlands highly enough.

The Darksiders series is inspired by the Four Horsemen of the Apocalypse and different games in the series see players taking control of a different character. The first game is War, the second is Death, the third is Fury and the fourth introduces Strife. The entire hack and slash action-adventure series is worth a playthrough, but it’s Darksiders II and Darksiders Genesis that look and feel most like the Diablo series. The games are set on post-apocalyptic earth and angels and demons fight for control of the world, with humanity on the brink of extinction. There are weapons, platforming, skills, and more.

Set in Ehb, a medieval kingdom, you’ll play here as a farmer (who you have the opportunity to name yourself) where you’ll embark on a quest that involves defeating an invading force. Although there are no character classes here, you’ll have control over tactical decisions and weapons. It’s an isometric RPG that was a little bit ahead of its time when it came out in 2002. The good news is if you’re a fan of this, there are numerous sequels to play.

With Grim Dawn, the developers stated that they wanted to take the formula that the Diablo series utilized with character development and exploration and take it to new heights. They do a good job of it, while also pushing boundaries in other areas. For example, unlike most offerings in this genre, the choices that you make during your playthrough heavily impact the events of the game and the ending. There is a dual-class system and the game’s dark and gloomy atmosphere will give you strong flashbacks to the third entry in the Diablo series. If you enjoy this one, it’s made by the same developers as Titan Quest, which appears later on this list.

The good news about this game is everyone that who plays it heralds it as one of the best in the genre. For those that have played it, it’s almost unanimously agreed that what it does in terms of presentation, storytelling in gameplay gives the entire Diablo series a run for its money. The bad news is, at the time of writing, you can only play it properly if you live in Korea, you can play an open beta if you live in Russia, and there is a closed beta in Japan. As of right now, a VPN is the only way to play it for anyone else. However, the silver lining is that the game should be coming to Europe and North America at some time next year.

Perhaps the most popular game in this list, Grinding Gear Games’ Path Of Exile is, in many ways, a spiritual successor to the Diablo series (and specifically the second game). Anyone who jumps right into this game could be a little intimidated, but if you’re reading this list, it’s fair to assume your experience in Diablo would help you here. Path Of Exile boasts arguably the best customization options in the RPG genre. And the best part? It’s free to play.

The Sacred series shares a lot with Diablo, so much so that you’d be forgiven for thinking it was a bit of a clone at first. But a deeper dive and more hours of gameplay will show you that Sacred does actually try to do its own thing despite the similarities. Either way, it’s one worth checking it for Diablo fans, especially the first game in the series. In the world of Ancaria, you’ll use magic, melee, and other abilities to defeat enemies. Some things in the world are 3D, but it’s a 2D game.

If the dungeon crawling and fantasy aspect of Diablo is what you loved most about it, then this game should be right up your alley. Shadows: Awakening is a standard offering in the dungeon crawler genre that does have some nice extra touches. For one, there are challenging puzzles like having to step on the correct floor traps and moving boulders around. These make a nice change from the typical grind of these kinds of games and can break up the monotony of things. There is a variety of characters, lots to loot, and a good narrative.

11. 'The Incredible Adventures Of Van Helsing'

Hugh Jackman did an exceptional job of portraying vampire slayer Van Helsing in the 2004 film of the same name. If you were a fan of the movie, the game that came out in 2015 is a must-play. Even if you’ve never seen or heard of the film, this game is certainly worth checking out. You play as a young Van Helsing in the Victorian era where you’ll have Lady Katarina by your side while you do what vampire slayers do best. There’s also a co-op mode where you can play with friends or people online.

Titan Quest is obviously similar to Diablo, which is why it’s on this list in the first place, but this game did so well and was so revered that many see it as superior. Some describe this game as a combination between Diablo and God Of War, which sets you up for some hefty expectations that it could still meet. It’s made by the same developers as Grim Dawn, which appears earlier on this list. In all truth, looking at Titan Quest as just a game similar to Diablo doesn’t do it justice. There is an abundance of options when it comes to character customisation and a whopping 28 classes from which to choose your character in the first place. There are also fun co-op modes to play online.

Right off the bat, the Torchlight series will remind Diablo fans of their cherished series because of the top-down gameplay. But what’s interesting is that some of the developers of the Torchlight series actually worked on the first two Diablo games. That’s not to say that they’re identical though. What Torchlight borrows from Diablo in terms of swarms of enemies and explorative gameplay, it makes up for with its colorful style which differentiates it. The four character classes here are Engineer, Outlander, Berserker, or Embermage, all of which can be customized based on playstyle. We definitely recommend a playthrough of both games.

What Haemimont Games’ Victor Vran lacks in originality and forward-thinking mechanics and gameplay features, it makes up for in how much fun it can still be to play it. It lives in a Victorian setting and looks gorgeous. Despite the fact that you can only play as the title character, there are a bunch of customization options for him and the combat in this game is well worth experiencing. There are puzzles, secret rooms, and weapon classes that give you different benefits. It’s definitely Diablo offspring, but you won’t feel like you should just play through the Diablo series instead. This game stands on its own two feet.

If the Diablo series were a little darker, more intense, and more violent, you’d have Warhammer: Chaosbane on your hands. If you’ve ever played another Warhammer game, then you know what to expect with this one. It features a 15-hour campaign, level design, and boss battles which are what stand out the most. One thing that divides players is the itemization. The game only gives you items for your own class which some love and some think are too easy. Either way, it won’t make or break the game for you.