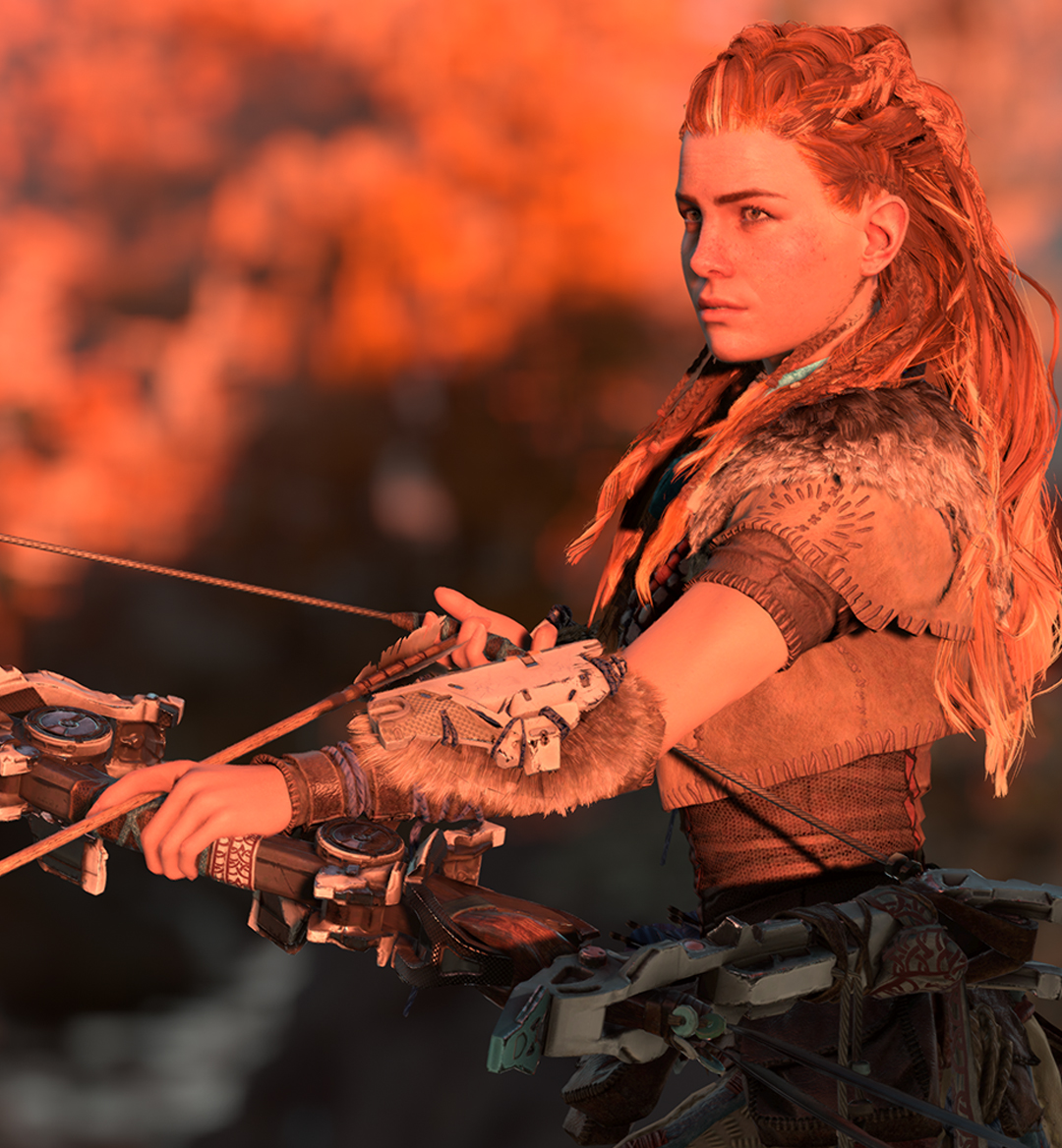 Recently, Horizon Zero Dawn was made free for both PlayStation 4 and PlayStation 5 users. It wasn’t one of the free games you get monthly if you have an active PlayStation Plus subscription either. It was the Complete Edition of the game for free, with no strings attached.

Naturally, that garnered a lot of interest, but it’s not like the game needed it. Guerrila Games’ Horizon Zero Dawn is widely considered to be not only the 2017 Game Of The Year but one of the best games to have ever been released on the Sony console that it’s exclusive to.

In it, you take on the role of Aloy who lives in the 31st century in a world where machines rule the planet. Most of them are friendly, but some are far from it. Humans are scattered across the land with little access to technology. It’s a simple setting but has made for one of the best open worlds ever created.

The game does everything incredibly. Its open-world, storyline, characters, visuals, and combat are all some of the best you’ll ever experience in any game. That might mean that once you complete it, you have a little feeling of emptiness about what to play next. We’ve done our best to help and have compiled a list of 17 games like Horizon Zero Dawn. Check them out below in alphabetical order.

Many games on this list are on here because they share Horizon: Zero Dawn’s incredible story, characters, and open world, but ARK: Survival Evolved is perfect for fans of HZD’s resources scarcity, the hunting, and the style of animals there. No, Ark isn’t home to any machines technically, but the game features a vastly diverse set of creatures from multiple different time periods. In fact, there are close to 200 creatures in the game, all of which you can use to either get food or tame. Building up from being on a desert island with next to nothing to have a bunch of lands and a functioning community is quite the journey.

The Assassin’s Creed series was hit or miss for a few years, even amongst fans who loved it. Most agree that when Assassin’s Creed Origins came out a few years ago, it was a return to form from Ubisoft. Odyssey, being the follow-up, was a crucial moment then, but it followed suit. Set in Ancient Greece, the game feels more like an RPG than any in the series before it. There are dialogue options and depending on how you play and some decisions you make, you’ll get a different ending. Both Odyssey and Horizon Zero Dawn have similar ways they approach their combat.

Making a sequel to Arkham Asylum was always going to be quite the task, but Rocksteady Studios did the series justice in 2011 with Batman Arkham City. As much as the Colorado that Horizon Zero Dawn is set in has its own atmosphere, Arkham City has just as impactful an atmosphere, only a much, much darker one. This one will be a particularly good choice for you if what you loved about Horizon Zero Dawn was its stealthier encounters and battles. The Marvel’s Spider-Man game from a few years ago (which appears later on this list) certainly borrowed heavily from this series with its gameplay style. We’ve picked out City as a favorite in the series, but the whole thing is worth a try.

Primal was a first in the Far Cry series because it was set in pre-modern times, as the name suggests. This is similar to Horizon Zero Dawn, which is of course set in the future technology, but post-apocalyptic Colorado is similar to Far Cry Primal’s world. A key difference here is that this game is an FPS, but it’s not dissimilar in spirit. You play as Takkar who has to defeat certain creatures but can use some to his benefit in some circumstances, just like Aloy.

A PlayStation 4 exclusive, Ghost Of Tsushima was one of the most talked-about games of last year and it had great reason to be. Its art style and graphics make it stand out and in terms of how it compares with Horizon Zero Dawn, they share so many of the same elite gameplay elements. Its exploration, battles, and stealth aren’t identical to HZD’s, but they’ll give you some of the same feelings during your playthrough.

Perhaps this one could be daunting to jump into because of how many games come before it. The story of Kratos before this game is extensive and it could make you iffy about whether or not to jump in here, but there’s nothing to worry about. Santa Monica Studio went out of their way to make it a standalone game. With that being said, understanding some of the stories will definitely enhance the experience for you. The entire game is presented as one tracking shot that never cuts. It makes for one of the most mesmerizing games ever. One of the unfortunate similarities that this one has with Horizon Zero Dawn is that just like Ghost Of Tsushima and a couple of games later on this list, it’s exclusive to PlayStation.

7. Legend Of Zelda: Breath Of The Wild

Horizon Zero Dawn’s art style is vibrant and really brings the world to life. Legend Of Zelda: Breath Of The Wild is right in the same lane, with its visuals being very colorful and animated. Zelda is a legendary series and in this offering, just like Aloy, Link is tasked with taking down enemies that are basically machines.

I can still remember the oohs and aahs that this game got when it was previewed at E3 in 2017. Back then it was clear that it would be hard for it to live up to expectations, but most would agree that it did even more than that. The open-world is perfect for web-slinging through and the style of gameplay, as crazy as it sounds, really makes you feel like Spider-Man. Being stealthy is just as fun as letting all hell break loose and different enemies require different tactics to defeat. Though they may not seem so similar on the outside, Horizon Zero Dawn and Marvel’s Spider-Man are in the same vein and the latter is certainly worth a try if you liked the former.

Andromeda might not have done a lot for the name of the Mass Effect series as fans of the series generally didn’t think it was quite up to standards, but if you’re going in cold after playing Horizon Zero Dawn, then there are some things that you could like here. The spacious open world will give you some flashbacks. You’ll have a hard time getting bored here with a hell of a lot to do.

If your favorite part of Horizon Zero Dawn was figuring out the perfect way to take down each machine, maybe by trial and error, then Monster Hunter World’s own combat system could be right for you. Hunting enemies, getting parts, and crafting new weapons with them to deal with the next monster is the name of the game. The tougher monsters genuinely feel like boss battles that are massive hurdles to get over.

One of the lesser-known games on this list, NieR Automata’s biggest similarity to Horizon Zero Dawn is that it pits humans and machines against each other, which will be familiar and comforting if you’ve ever played an hour of HZD.  It’s an RPG that borrows elements from other games well.

No matter how much the stunning open world of Horizon Zero Dawn impressed you, no matter how much the characters captured your emotions, no matter how enthralled you were by the narrative, Red Dead Redemption 2 will still be a game that blows you away. Admittedly, the pace of the game was off-putting for me at first, but when I came back around to it to appreciate what it was, there was no letting go. People have said the same about the initially slow pacing of HZD. This game is about as close to a game can get as living out a real-life virtually. Tasks that would be mundane in other games become their own games here. You can genuinely spend hours hunting animals or fishing. Red Dead Redemption’s sequel is a must-play for gamers anywhere and everywhere.

13. Shadow Of The Tomb Raider

The first and most obvious similarity between Horizon Zero Dawn and any of the Tomb Raider games over the years is the strong female protagonist that we need so much more of. Lara Croft is one of the greatest video game characters of all time and Shadow Of The Tomb Raider is one of her best showings. As always with these games, the combat is dynamic (with a bow and arrow too) and everything between the action sequences is just as captivating. This one is an adventure that is well worth setting out on.

Although the open world of Horizon Zero Dawn is beautiful, in terms of its detail and vastness, there are games that sought to really raise the bar and Skyrim is one of those. If you’ve been within three feet of a pc in the past decade, you’ve heard of this game or at least some vague reference to it. You don’t ever even have to entertain the storyline to have fun in the game, but if you want to, that’s great too.

If you never played this game because you saw all of the ‘controversy’ around it and wanted to stay away, you’d probably be forgiven, but you owe it to yourself to give this one a try. Of course, playing the first game is necessary, but that shouldn’t be a problem since it’s a Game Of The Year candidate. This sequel split fans down the middle, but the way I’ve always seen it is that the game made you feel something. Get rid of all your expectations for what it could or should be and just experience it. In terms of how it relates to Horizon Zero Dawn other than the protagonist being a woman, the open-world portion is incredibly immersive and the characters feel fleshed out with their own personalities.

There’s really no way that you could have owned a PlayStation, tried to look for games to play, and not come across The Witcher 3: Wild Hunt. Along with Horizon Zero Dawn and some of the other games on this list, it’s widely considered to be one of the better games ever made. It’s a step up from HZD in terms of its role-playing game elements, but it’s one you’re likely looking for. Like Horizon Zero Dawn, Wild Hunt does an amazing job of creating its own believable world and making it somewhere you want to traverse as Geralt. The combat is especially more diverse and complicated here, but that only makes it more rewarding when you come out victorious in any battle.

The Uncharted series by Naughty Dog is arguably the best series of games ever made. If you know anything about those games, you know that the exploration aspect of Horizon Zero Dawn is what is reflected here the most. Nathan Drake goes on some insane journeys in each of the games and we only picked the fourth one because it’s the most recent in the main series. If you enjoy Shadow Of The Tomb Raider which appears earlier on this list, you’ll definitely want to give this one a try too. Fans have drawn comparisons between the two for a long time.