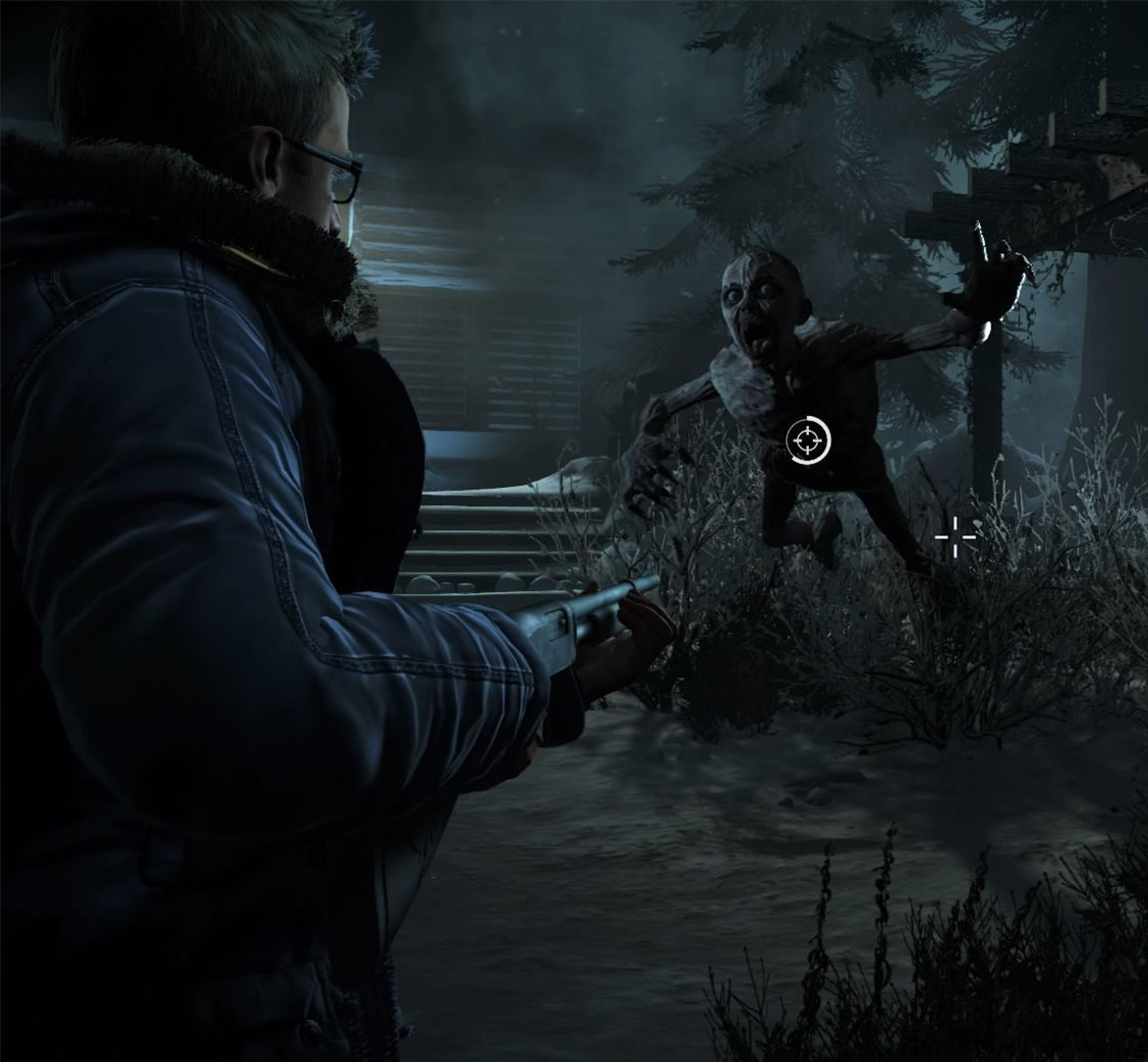 Until Dawn was the unexpected smash hit of 2015. At the time of its release, games like Until Dawn weren’t exactly hotly anticipated. You had some stars like David Cage and his catalogue of titles but, for the most part, the genre wasn’t known for its popularity. While Until Dawn didn’t necessarily change that, it did give players a new appreciation for games that, for lack of a better word, sacrifice gameplay for a compelling story.

And that is the common denominator for the games on this list. While Until Dawn is best known for its horror elements, I believe it’s more at home with games that place an emphasis on telling a story.

Let me go ahead and warn you, David Cage will have a strong presence on this list. His games, while divisive in terms of storytelling and quality, are undoubtedly synonymous with storytelling games and Indigo Prophecy (also known as Fahrenheit) is definitely one of his wilder stories. The game puts you in the shoes of a disturbed killer and the police trying to catch him. It’s a game of cat and mouse that takes several unexpected left turns.

While not explicitly a horror game, Indigo Prophecy does have some horror elements and a healthy amount of jump scares. It’s a good title to pick up, if you’re done with Until Dawn and looking for something else to play.

From the creators of Until Dawn, The Inpatient is a 2018 release that didn’t quite resonate with players as much as it’s predecessor. The game utilizes the Play Station’s virtual reality headset. While this may change the gameplay, somewhat, The Inpatient echoes Until Dawn in several ways.

The game puts you in an insane asylum that exists in the same world as Until Dawn, just several decades in the past. Much like Until Dawn, The Inpatient’s story is heavily dependent on player choice. Characters and scenes are entirely dependent on how the character plays the game which enhances the title’s replayability factor.

At no point did Telltale’s The Walking Dead reflect the real-world trouble the company was embroiled in. From the start, The Walking Dead told a compelling story that rivaled it’s AMC show counterpart in every way. Every chapter was released to ravenous fans who over the course of years had become attached to Clementine, Lee and the game’s perpetually growing and shrinking cast of characters.

The art style is different from Until Dawn but the similar gameplay, particularly the player choice mechanic, earns this game a spot on the list.

4. Until Dawn: Rush of Blood

Released in 2016, Until Dawn: Rush of Blood bridges the gap between Until Dawn and The Inpatient as the first VR experience that heavily features characters and assets from Until Dawn. The game is more of an extended tech demo than a full blown story. It puts you on a roller coaster that is constantly bombarded with increasingly frightening imagery. The player, armed with pistols, has to defend themself from the horrors the game throws at you. It’s easiest to think of the game as one part Until Dawn one part House of the Dead but with much better graphics.

Widely considered David Cage’s magnum opus, Heavy Rain is a 2010 release that helped put Cage on the map. The game boasts a story that is a bit more subdued than Indigo Prophecy, which graphics considered to be cutting edge for its time. In this installment, Cage tells a dark and disturbing story about a man trying to rescue his son from the clutches of an origami-themed killer, whose identity will leave players gobsmacked.

Heavy Rain is perhaps one of the most critically acclaimed games on this list. Much like Until Dawn, Heavy Rain’s narrative sets it’s hooks in you and it doesn’t relent for a second.

There aren’t many games out there that can be compared to Life is Strange. Everything from the game’s story to its tone to its presentation and characters are unique, which is why so many players were drawn to it quickly after its 2015 release.

Life is Strange tell the story of a teenager who finds herself able to manipulate time. Her decisions surrounding this ability dictate the game’s winding narrative. While Life is Strange lacks horror elements, it’s gameplay and teenage angst mirrors Until Dawn, putting it in the top ten of this list.

Another David Cage title, this time with a bit of star power. Beyond: Two Souls, released in 2013, is perhaps the most commercially successful title on David Cage’s resume. It tells the story of Jodie, played by Ellen Page, a child who appears to have psychic abilities due to her spirit being tethered to another spirit that can manipulate objects. Think JoJo’s Bizarre Adventure but less bizarre but still pretty bizarre.

The game follows Jodie’s life as she learns to control her abilities. It’s a story that, at times, can be just as gut wrenching as it is inspiring. The game represents some of David Cage’s best work.

A group of friends decide to spend their down time on an island where an evil spirit lies dormant. If this sounds like a sequel to Until Dawn, it isn’t. It’s Oxenfree, a game that takes the horror trope of a group of friends discovering ancient evil, while still remaining fresh. The more you and the other characters explore the island, the more you uncover the mystery of the mysterious force behind the unexplained occurrences.

The game inserts AAA storytelling in an indy package. It started its life as a Kickstarter before it’s release in 2016. The game’s story is intentionally ambiguous which has invited a large group of fans to come up with their own theories about the island, in a similar fashion to Five Nights at Freddy’s.

2017’s Call of Cthulhu is one of two games that tries to turn the Cthulhu mythos into a game. Drawing heavily from the well-loved tabletop board game, Call of Cthulhu puts you in the shoes of an investigator hired to unravel the mystery behind the death of a well-loved painter and her family. While the main character is a bit of a sceptic, at first, he quickly discovers and is forced to accept that something supernatural is behind the mystery.

While the game could have benefitted from a bit more polish, the story is tells is equal parts engaging and disturbing. Lovecraft fans or students of the occult will enjoy the games many, many eldridge easter eggs, while those looking for another Until Dawn experience won’t be disappointed.

An older game that flew under a lot of people’s radar, Murdered: Soul Suspect garnered a lot of praise when it released in 2014. The game puts you in the shoes of a detective who was recently the victim of a serial killer. You must use your knowledge as a detective, coupled with new non-corporeal abilities, which include taking control of living beings. The game manages to be dark and brooding while not delving completely into the kind of horror Until Dawn is best known for. The similarities between these two games lies more in the tone and gameplay.

While there are several games that benefitted from an extended period of anticipation among fans, few games have kept fans waiting more than Detroit: Become Human. Anticipation for this game kicked off in 2012 after the release of a tech demo, a video named Kara. In the video, a factory worker decided not to scrap an android after noticing it seemed to spontaneously develop sentience. To say the video wowed audiences was an understatement. The problem is the disclaimer at the start of the video.

“The following footage is a prototype running in real-time Playstation 3,” the disclaimer read. “It is a concept only and is not taken from any software title currently in development.”

The call for Quantic Dream, the developers of the tech demo, to expand it into a proper game were too loud for the company to ignore. Six years later and Detroit: Become Human hit the markets.

A near-future science fiction tale, David Cage tells a story that is oddly prescient given recent events. While the game’s narrative fumbles at times, it consistently engages players in one of David Cage’s more interesting stories.

The most critically acclaimed games on this list, The Last of Us is a contender on most “Top Games of All Time” lists. Released in 2013, the game tells a sweeping story of two people trying to survive a post-apocalyptic world. But this isn’t a retelling of The Road or Blood Meridian. The Last of Us manages to stand on its own narrative merits.

WIth the game’s sequel scheduled to release sometime in the coming months, now is a perfect chance to revisit this classic.

A pioneer of the horror genre, time has been kind to Alan Wake, which is something that can’t’ really be said for other games released in 2010. Part psychological thriller, part horror title, Alan Wake puts you in the shoes of the titular character in a game that is very reminiscent of a blockbuster movie. That’s what makes this game so similar to Until Dawn. Alan Wakes implements a combat system that, for the most part, isn’t overused and avoids becoming  tedious. Alan Wake’s influence on modern horror titles is clear and it doesn’t look as if we will be moving beyond the Alan Wake playbook anytime soon.

Another unexpected hit, Control released in 2019 to a pre-established cult following. While not directly related, Control is very reminiscent of the fictional organization called the SCP Foundation. Users from across the world have contributed to the SCP mythos and many of these very people made Control the success it is today. THe game’s developers have acknowledged the similarities between Control and the SCP Foundation and are happy that such an enthusiastic community has taken a liking to their game. The game has you play the role of a new recruit to an organization that hunts down supernatural artifacts. The artifacts range from supernatural juke boxes to just about anything you can imagine. Fans of Until Dawn should be able to pick up on the gameplay with little issue.

Perhaps one of the most interesting games on this list, The Stanley Parable is a...well, parable, about doing what one is told. You play the titular stanley, who makes his way though a labyrinth of office rooms while a narrator directs you where to grow. The game give you the option to listen to the narrator’s instructions or forge your own path.

That’s what makes this game so interesting. Like Until Dawn, the narrative is based entirely on your decisions, though The Stanley Parable increases the weight of your decision, particularly if you lead Stanley to his doom.

Buy now
Slide 1 of 3
Did you like this article?