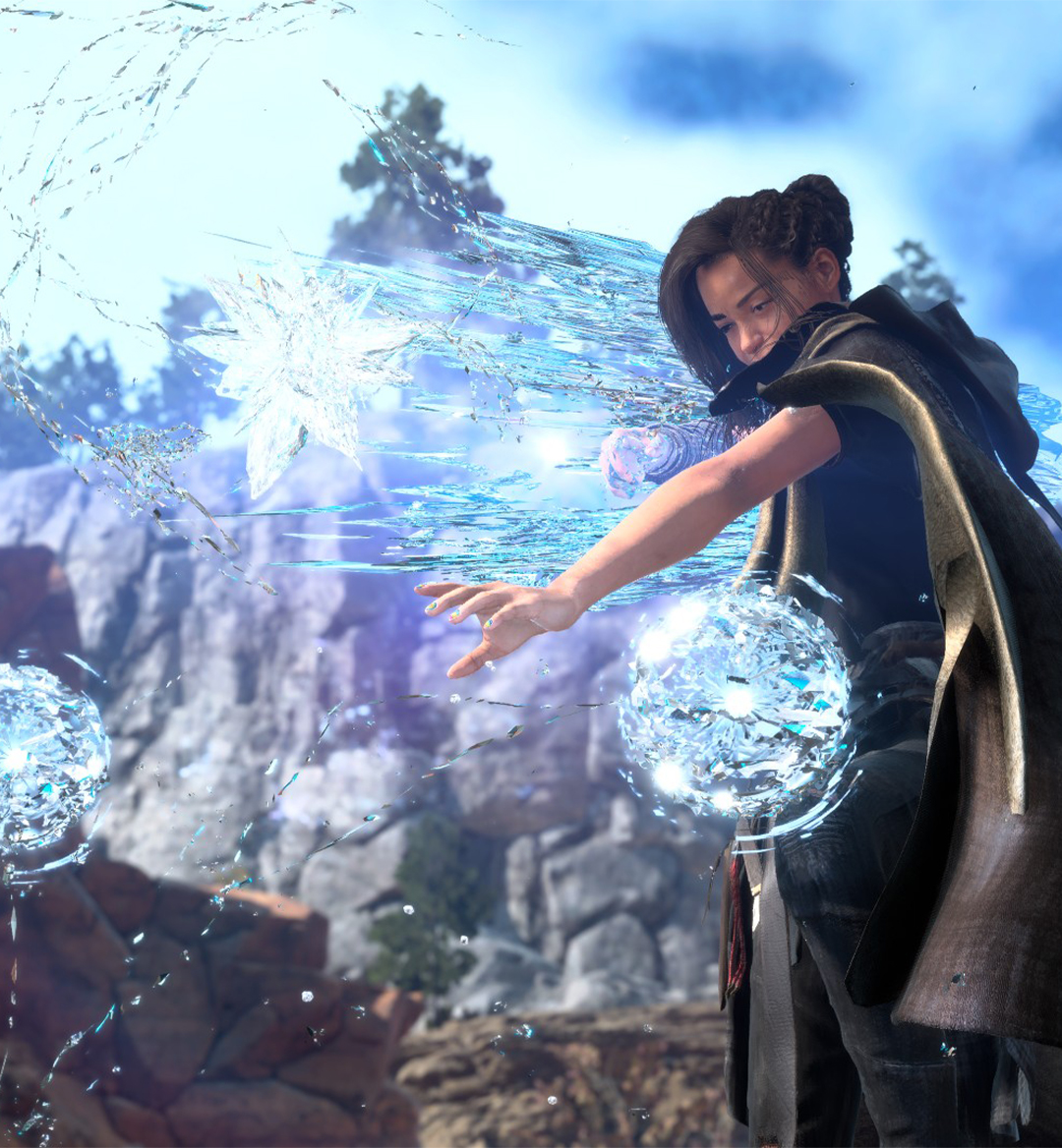 Before I deliver my final thoughts on Forspoken, I want to make it clear that I had the same roller coaster of emotions as most onlookers right up until the launch of this brand-new Square Enix IP. I exclaimed excitement at the first instances of gameplay footage, started getting worried once the game's main character began blurting out corny dialogue, and pretty much had my hype dwindled down to nothing after a highly disappointing demo. But after spending 20 hours getting to know Frey and doing everything in my power to save the kingdom of Athia, I walked away from Forspoken with far more positive impressions than I initially expected. Yes, I'm just as shocked as whoever is reading this right now! Now with all that being said, let's get into my extensive Forspoken review. 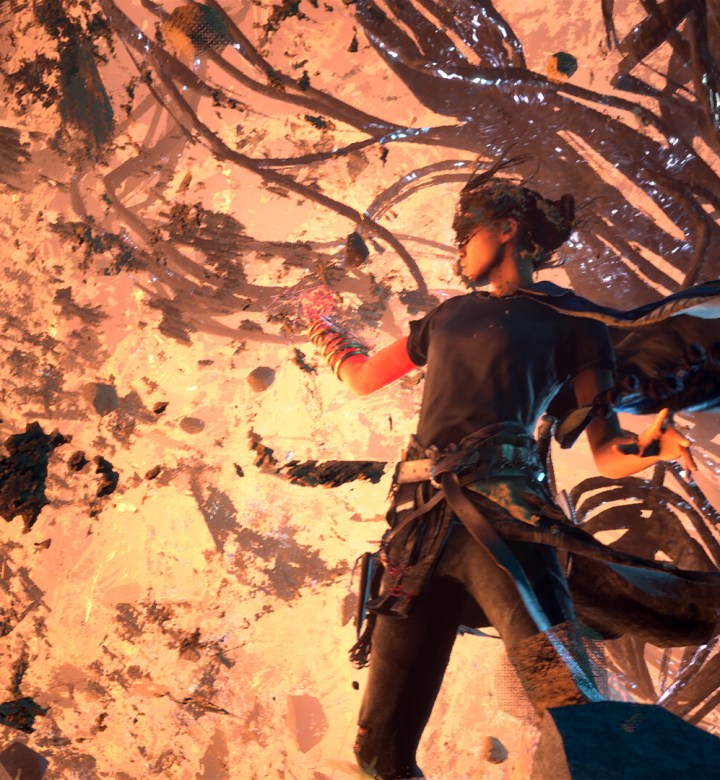 At the beginning of Frey's journey, you'll discover that she's struggling to make ends meet and stay out of trouble in New York City. And to be quite honest, the game's first chapter does feel pretty slow. But during a specific point during Chapter 10, I came to look back on the game's intro with a bit more fondness since it clearly showed how much strife Frey experienced during her time in NYC and her dream scenario for that city living. Once you reach the vast kingdom of Athia, you'll be introduced to Frey's unexpected ally in the form of a magical cuff (which is named "Cuff," unsurprisingly) that provides you with the magical powers and advice needed to get to the bottom of your current dilemma.

When it comes to Forspoken's overall plot, it starts out on a mysterious note and becomes incredibly compelling as you make your way across the game's 12 chapters. You'll run into characters that you'll quickly grow fond of, quickly begin to care about the debilitating "Break" that has befallen your new home, and be blown away by the plot's crucial reveals over time. Now the common complaint about this game pre-launch is just how unlikable Frey comes off.

Even though I grew to like her as I made my way deeper into the game, I was still put off by Frey's constant use of the words "F**k" and "MF'er." During Forspoken's more tense moments, I couldn't help but sigh whenever Frey chose to drop another expletive she picked up from New York in order to make her extreme anger evident. You'll want to want to make sure to set your "Cuff Chat Frequency" option to low - Frey and her mysterious ally tend to spout off the same lines over and over to an annoying degree as you go exploring. Cringy curse word-filled dialogue moments weren't enough to keep me from enjoying the majority of this game's plot trappings, however. 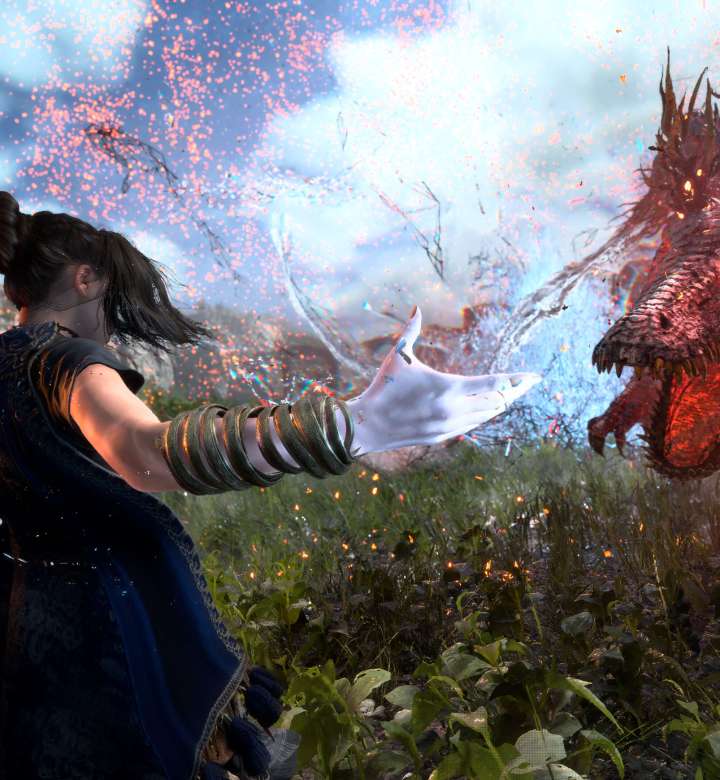 Venturing through the four main portions of Athia was more visually varied and gratifying than I could have imagined. One major factor I became accustomed to Forspoken is how it allows you to get familiar with your current suite of abilities that cater to your maneuverability. At first, all I could do was run at a comfortable pace and automatically leap over obstacles thanks to the assistance of Frey's magical armament. As Frey comes into owning a new type of supernatural power, she earns a new way to quickly ascend to far-off locales.

Using those new abilities to make your way across the game's vast open-world map is a continually enjoyable endeavor that looks and feels great in motion. It's easy to think that the Forspoken's drab and uninspired starting location will be like that for the rest of the game. But you'll be surprised to find out that that's actually not the case. Stick with Frey & Cuff long enough and you'll be treated to new destinations that have their own color schemes and themes that you'll come to treasure. I came into my Forspoken review hoping for more graphically diverse destinations and that's exactly what I got.

Visually, Forspoken is solid enough. I chose to play the entirety of the game in "Performance-Focused" mode, which emphasized a higher frame rate by employing a lower resolution on PS5. And for the most part, I was impressed by the majority of Forspoken's graphical output. The aforementioned locales look fine and the inner sanctums you delve into look equally splendid. The massive castles, ruined towns, and the main hub of Cipal are also fine examples of Forspoken's visual splendor. Issues arise once you take a closer look at the game's characters as they speak - they tend to look a bit off at times and come off as mannequins instead of genuine human beings. 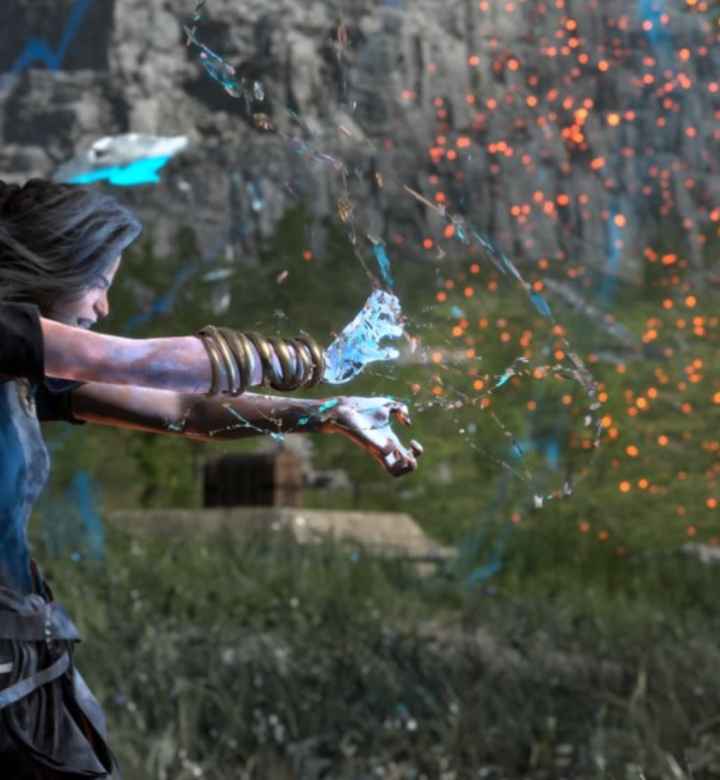 Forspoken's graphics truly shine once you take full advantage of its greatest feature - its magic-fueled combat. When I utilized that part of the game during the demo, I found its menu and sub-menu navigation template to be quite cumbersome and unwieldy. But in hindsight, I didn't enjoy it because the demo offloaded players with way too many abilities as soon as they booted up this small slice of gameplay. Getting attuned to your abilities from the jump and unlocking different elemental abilities at a steady pace will make those who were put off by the demo more understanding of what the game is trying to do. Once you come to understand the use of your primary elemental magic attacks and the support spells attached to each one, you'll get into an intoxicating rhythm during each combat encounter.

By playing around with a few features, you'll come to love Frey's varied toolset. I chose to have the ability to slow down time to change my primary attack, quickly activate support spells, and have my next active support ability automatically come into play while the one I just used refilled its cooldown meter. Players can choose to select their next support spell manually in a more strategic manner and have the same amount of fun I had during combat. Flinging massive rocks at airborne threats, enacting a massive fire dome around my foes, and sending a devastating water globe at a crowd of enemies are just some of the awesome moves you can activate as Frey. The true potential of the combat reaches its max during the game's major boss fights - you'll need to stay in motion and mix up your abilities as you clash with the corrupted and domineering "Tantas" of Athia. 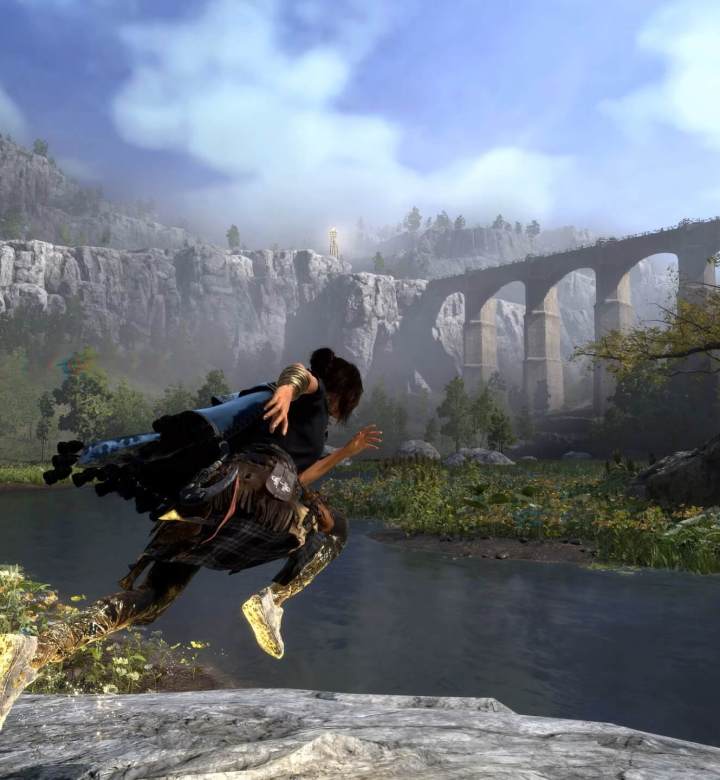 The open-world activities you can embroil yourself in are run-of-the-mill tasks you're already quite used to. There are safehouses to discover, which are used to craft items, refill your health, and upgrade your gear. You'll come across dungeons and abandoned villages that act as arenas that award you with new crafting tools, plus equipable necklaces, nail color arrangements, and capes. You'll also run into towers that either give you new destinations to keep an eye out for, random timed challenges to complete, and even mystical felines to befriend. I found all those assignments to be engrossing due to Frey's swift movement options and the staggering array of moves she can use during exciting combat encounters. I also found plenty of enjoyment in attempting to increase my combat rating by switching up my actions, taking advantage of enemy weaknesses, and using parkour to dodge incoming attacks. The camera can get unwieldy during combat at times, though - my positive Forspoken review impressions took another knock due to the fact that the lock-on camera doesn't immediately switch to the next active foe is a definite head-scratcher.

By the time I reached the end of Frey's magical journey across two worlds, I was ultimately left satisfied by what I played through. Once you get past the opening chapter, get to know the troubled citizens of Athia, figure out why Frey's new home is corrupted & why its rulers have been driven mad, and what it will take to save everyone, Forspoken will dig its claws into you. Its rough spots, which include Frey's annoying bouts of cussing, weird moments of the game's characters looking uncanny valley-like, camera lock-on issues during combat, and a washed-out-looking opening area, are hard to ignore. But ultimately, my Forspoken review can be summed up by this final statement - don't judge a book by its cover. Its quality visuals, combat, story, parkour, and boss setpiece moments are all worth commemorating.