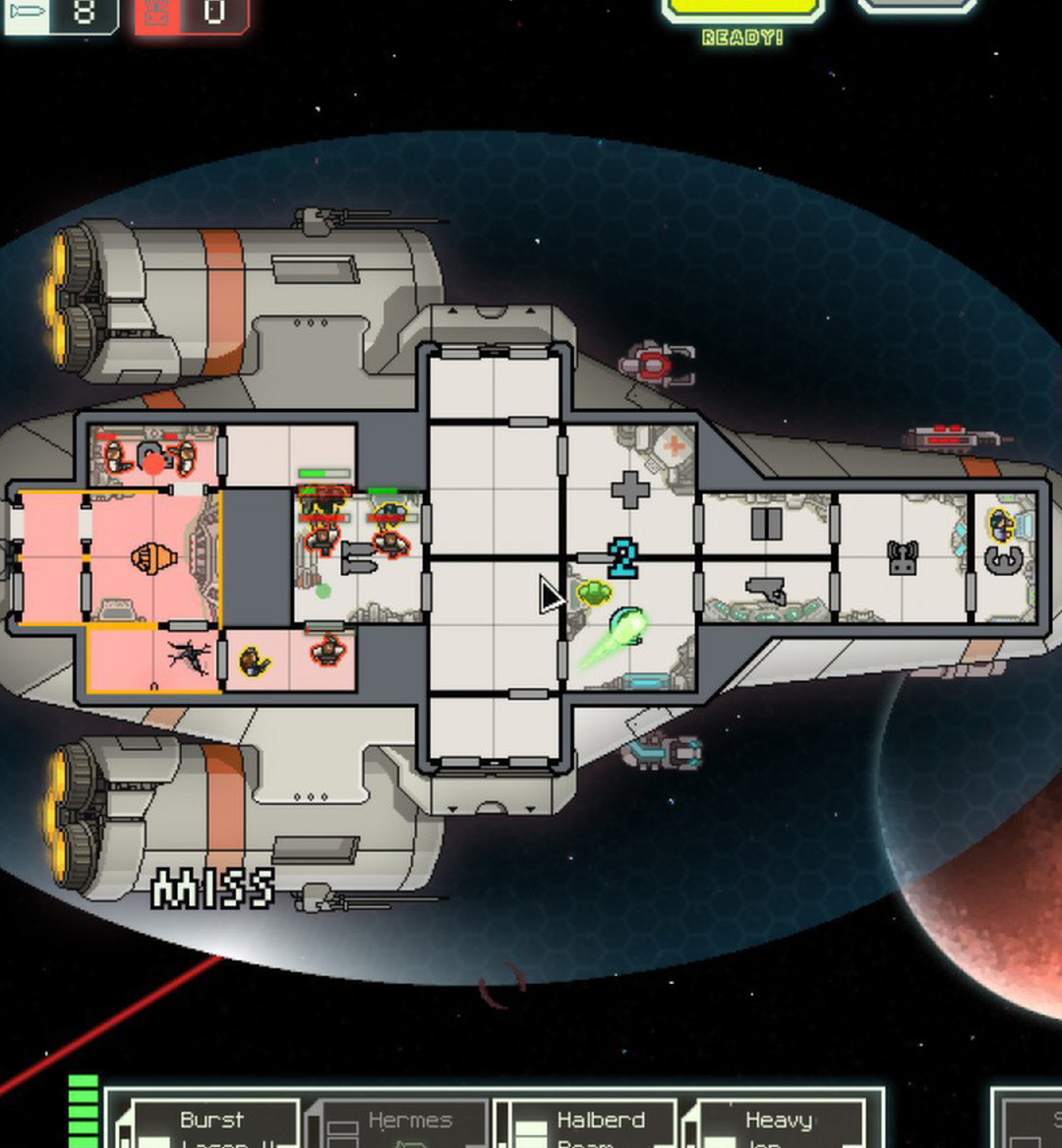 Ever since fans of the game played FTL: Faster Than Light, they have been looking for new ways to approach the game and beat it. It originally dropped on Windows, macOS, and Linux in 2012, nearly a decade ago now, and even though there have been mods to extend its life cycle and an Advanced Edition, players have been looking for something new for a while now. If you’re one of them, below we put together a list of 16 games like FTL: Faster Than Light. They could be on here for various reasons – the space setting, the roguelike genre, or just the all-around feel. Either way, if you’re a fan of FTL, there should be something on this list for you.

Battlevoid: Harbinger is a space exploration game in which you take on the role of a young commander who utilizes turn-based strategy against whatever space has to offer. This game is a great tactical challenge, and some reviewers even made a direct comparison with FTL: Faster Than Light, for more than just its setting. You’ll make choices about equipment, plan offense and defense, lure enemies into traps, build up your ship so that it can resist attacks from outside forces, and much more.

Ceres is set in a fictional scenario where a gate built to connect our world to other stars has malfunctioned, which means that the earth was destroyed and alien lifeforms have been drawn in. This leaves the surviving civilizations in a unique position and now, humans, monsters, and machine-gods fight each other. You take on the role of a young adventurer in charge of a spaceship, and an A.I. called Ceres accompanies you.

Drawing direct inspiration from FTL: Faster Than Light, Convoy is perhaps the game that you’ll hear about the most when discussing offerings similar to FTL on the market. Through the game’s pixel art graphics, you’ll maneuver a desert planet in a semi-trailer truck, all the while looking for parts of a crashed spaceship. The game’s characters communicate via text-based dialogue, where players pick their answers from a multitude of responses. Convoy is great for tactical combat too.

Developed by Alt Shift and published by Humble Bundle, Crying Suns was released back in 2019 on Windows and macOS and the summer of 2020 on iOS and Android. This game puts you in the shoes of a space fleet commander, where you’ll be tasked with exploring planets, meeting inhabitants, and the fight against other space fleets. Like FTL: Faster Than Light, this one received an Advanced Tactics update after its original release. Some have called it overly repetitive at certain points, but it’s well worth a try.

In Duskers, the basic aim is to try to figure out what happened to the universe for it to be in its current state. You do this by controlling a drone, traveling from ship to ship, salvaging materials in an attempt to repair and upgrade them to navigate your surroundings better. As well as enemies in the form of robots and other hostile life forms, there are also problems that the player can face, like radiation leaks, and the game revolves around how you deal with and solve these kinds of issues. The game was made by Misfits Attic and is available for OS X, Windows, and Linux.

If you were a fan of not only FTL: Faster Than Light but also Gunpoint, the puzzle-platform game from 2013, then this game is right for you. That’s because the same studio, Suspicious Developments, made Heat Signature. If that’s not enough to convince you to give it a try, Heat Signature won IGN’s award for Best Action Game in 2017. From a top-down view, players must steal technologies, rescue captives, and more in a space environment, which is always fun.

If you’re reading this, you’re a fan of FTL: Faster Than Light, which means you might know that that game was produced by the independent studio Subset Games. Their other game is one called Into The Breach, which came later than FTL. For that reason alone, this one is worth playing. It’s set in the future where humans battle against the Vek, a group of giant monsters. They do so in mechs via a turn-based combat system. Players control three mechs at a time in battle.

The vast majority of games on this list are set in space, and Double Damage Games’ 2015-2016 offering Rebel Galaxy is one of them. But what truly makes it stand out amongst the bunch is that it’s a Western-style space game, a unique combination of genres, to say the least. As the genre suggests, both pirates and aliens make appearances here. Combat takes place between gunships. As well as missions that are relevant to the story, players can take part in activities like trading, bounty hunting, and pirating. If you do end up playing and are a fan, the prequel was released a couple of years back.

Set in a fictitious version of the 1800s, Renowned Explorers: International Society is a turn-based strategy game that takes inspiration from Indiana Jones and FTL: Faster Than Light directly. Players can choose 3 different explorers from a choice of 20 (or 24 if you have an expansion pack.) The categories are fighters, scouts, speakers, and scientists. Players prepare for expeditions where they try to find the legendary treasure. Combat in this game comes in the form of fighting locals, but you can also choose to befriend them.

More or less, all of the games on this list are roguelike games, which is only natural, but Slay The Spire is a hybrid of a roguelike game and a deck-building card game, or at least it contains strong elements of the latter. On paper, perhaps this isn’t the best one to one comparison to FTL: Faster Than Light, but in an almost indescribable way, it gives the same feel, and for that reason, there’s a good amount of crossover in the two games’ fan bases. Here, players attempt to ascend multiple procedurally generated floors where they battle enemies. Combat takes place like a deck-building game.

In Space Rangers: Quest, to put it as simply as possible, there is a threat, and it’s your job to do something about it. The life of a space ranger is no joke, and on your way, you’ll have to figure your way out of tough puzzles and defend the organic life. Once you’ve chosen your spaceship and begun your journey, there’s no looking back. This game contains text quests, and the written dialogue here is conversational and easy enough to follow while also being engaging.

Many of the games on this list are set in space, which only makes sense because that’s where FTL: Faster Than Light is set. But if you’re looking for something set in a spatial environment that gives off a different feel to FTL, Space Rogue is well worth trying out. Developed and published by Origin Systems, this game is an RPG that switches between a top-down view and a 3D combat simulator. You’re a part of the crew on a spacecraft and are sent to inspect a derelict spacecraft. While you’re there, your own ship gets attacked, and where you go from there is up to you.

Spaceship Commander basically does what it says on the tin. You’re in full control of a fully customizable spaceship, but where it really gets fun is that you change your ship based on how you want to approach a certain battle ahead of you. You can aim to destroy a ship, board a ship or sabotage a ship’s reactor (which is something a lot of people might go for due to the success of Among Us.) With this one, you’ll need a friend because it’s a multiplayer-only game.

The second in the Star Nomad series is set in an open-world sandbox. Decisions you make here will affect how other inhabitants and factions see you, and you can play a massive role in society. This game is incredibly immersive. The conflict between factions can affect supply and demand. You can take on the role of a merchant, bounty hunter, smuggler, and more; random events make each playthrough unique, and both squad and enemy A.I. is intelligent enough for it to feel like a challenge.

If your actions having massive consequences is something that you’re into, then try out Starship Inspector. Just a few months old, some call it a clone of FTL: Faster Than Light, but if you’re looking at this list initially, perhaps that’s not necessarily a bad thing for you. There’s no doubt that FTL heavily influences this game, and it’s far from the only one. Here, you embark through randomly generated galaxies, all the while faced with tough decisions that you’re forced to make and deal with.

If you do want something similar to the experience that FTL: Faster Than Light offers and you don’t mind a steep learning curve and a challenge, one that some have even criticized for taking away from the game at times, then The Long Journey Home might be right for you. You traverse through a beautiful looking universe where you meet aliens who offer you quests. Here, you risk the difference in culture and misunderstanding something. The game is available to play on macOS, Windows, and the three major consoles.