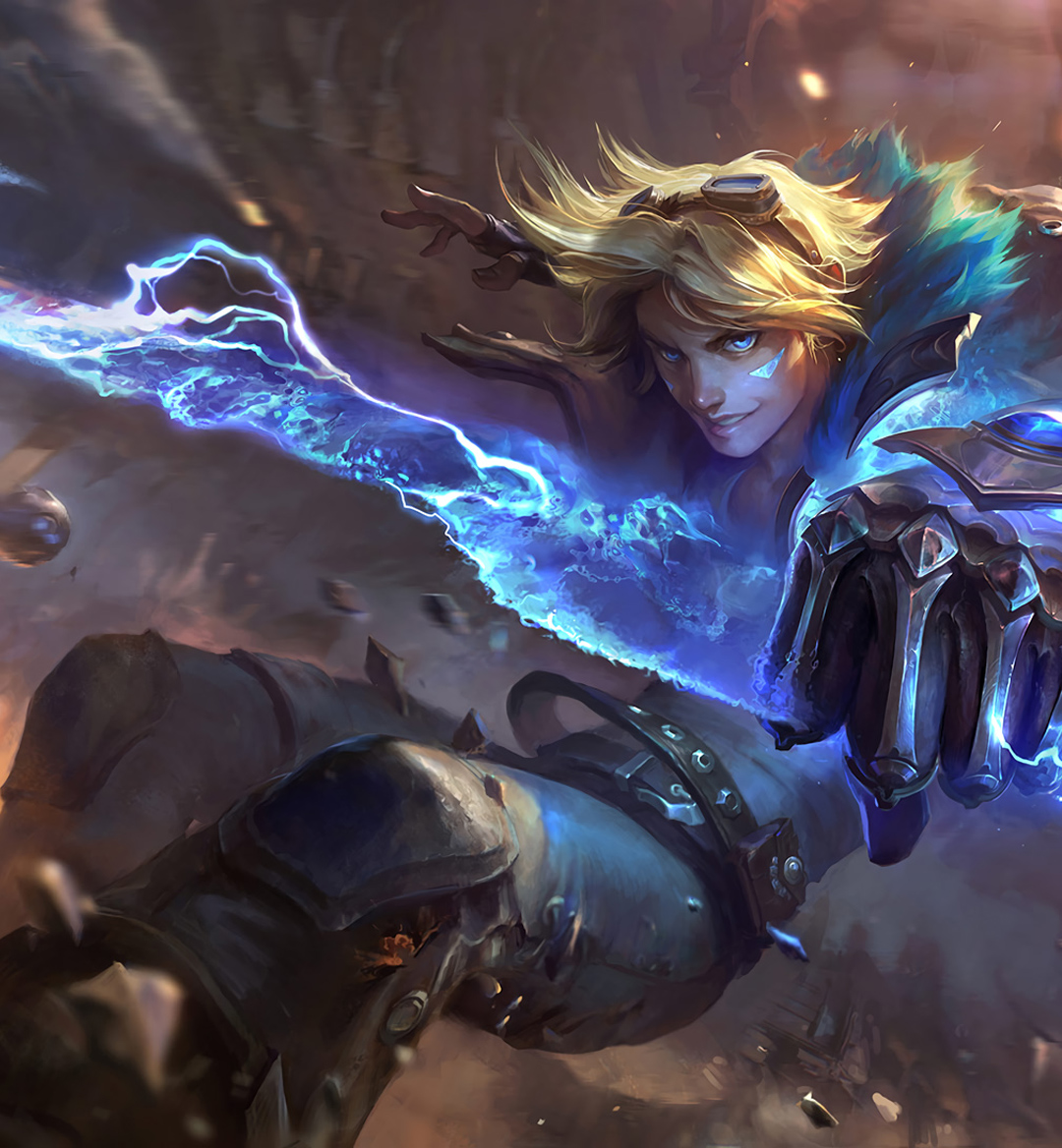 The console wars between Sony, Microsoft, and Nintendo may take up the biggest headlines in the gaming industry, but, behind the scenes, the video-game world seemingly rotates around League of Legends. Riot Games’ free-to-play multiplayer online battle arena was first released in 2009. Still, the game’s objective was simple, the multiple heroes and countless strategies make it impossible to predict how each match will unfold.

Not only is League of Legends one of the most played games in the world, but with about 30.9 million hours of LoL content watched on Twitch alone in May of 2020, it’s also one of the most-watched forms of content in the world. In fact, before Covid-19 took over the world and forced more people inside, League of Legends was already reported to have a higher viewership count than the Superbowl and it was projected to keep growing. If you want a break from playing and streaming League of Legends dive into some of these other MOBA games that satisfy a similar itch.

If League of Legends is considered the King of MOBA games, then Valve’s DOTA 2 is undoubtedly the queen. Just like League of Legends, DOTA 2 is also inspired by Warcraft III’s world and characters. Players control one hero in a squad of five as they face off with another team and try to overrun their base. Each hero has a unique power set and way of interacting with the world around them, giving gamers a lot of opportunities to drill into their own play style. For any eSports fans, DOTA 2 tends to have some of the most exciting, high-stakes tournaments, with 2019’s “The International” tournament having a total prize pool over $34 million.

Free-to-play and accessible on practically every gaming device, Smite allows players to control different gods, goddesses, and mythological beings as they duke it out with other powerful opponents. The environments and certain character builds look very similar to League of Legends, but rather than play via a birds-eye-view perspective, Smite positions the camera right behind the heroes so players have a more street-level, third-person perspective of all the action. With multiple player-versus-player modes to choose from, Smite is an enjoyable title with just enough variety to keep MOBA fans constantly coming back for more.

If you’re simply a fan of MOBA games, it can be hard to choose a title to truly devote yourself to. On the other hand, if you’re a novice to the genre and want a familiar franchise to guide you through the hoops, Marvel Super War is the title for you. Released in December 2019, the game is still technically on beta mode but it is available to play for free on both Android and Apple devices. With different characters like Hawkeye and Hulk filling traditional team slots like the marksman and tank roles, players create squads and race to destroy other iconic Marvel characters’ bases.

Tencent Games may not be a household name in the U.S. yet, but their Arena of Valor title is one of the most popular games in China and is slowly gaining a large presence in the international eSports world.

Available on mobile devices and Nintendo Switch, Arena of Valor sees gamers control heroes with unique powers as they join either three or five-person squads to take on their opponents. With a whopping 101 heroes to choose from, there are numerous skills to learn and countless possible team options.

As if Blizzard Entertainment didn’t have enough crazy-successful franchises under their belt, the game developer launched Overwatch, a first-person shooter, in 2016. Like League of Legends, Overwatch has players choose unique heroes to create the ultimate online team.

Part of what separates this title from other games on the list is the ability to actually switch heroes in the middle of a match, allowing players to fill multiple roles on a team or simply fiddle around if they get bored with their original decision. While Overwatch 2 has been announced, the developer still spends a lot of time updating the current title and introducing new events to keep excited gamers coming back for more.

One of the most popular games in the world, Starcraft II was released in 2010 and still has a massive player base. A continuation of the original Starcraft, gamers are plopped down in the middle of an inter-species, galactic war, and forced to rally their troops to victory. Like League of Legends, the game utilizes a bird’s eye view perspective so players can watch the entire match unfold and alter their strategies in real-time.

A team-based game that sees five players come together to destroy the opposing teams “King’s Core,” Heroes of the Storm is based on a smorgasbord of Blizzard properties to create the ultimate multiplayer experience (they technically don’t refer to Heroes of the Storm as a MOBA or real-time strategy game even though it features similar qualities to both). Featuring elements from franchises like Warcraft and Overwatch, the free-to-play game is an action-packed experience with over 89 unique playable heroes to choose from and unleash on the battlefield.

Forget meager human soldiers or fantastical warriors, Airmech lets players control mechanized robots and pilots as they compete for dominance. No matter which game mode players choose, the teams never quite reach five players each as they do in League of Legends, but the game maintains a similar sense of hectic energy. With explosions dotting the map and bullets constantly splashing across the sky, Airmech Strike is an adrenaline-filled ride that stands as one of the best free-to-play MOBA games on the market.

9. ‘Paladins: Champions of the Realm’

Similar to Overwatch, Paladins is an exciting, hero shooter game with unique characters for players to choose from while creating a balanced squad. Free-to-play and available everywhere, Paladins is set in a world with a nice balance of sci-fi and fantasy elements to draw players deeper into the various versus modes available to choose from. The art direction and impressive graphics set this title apart from other free-to-play MOBA games, but it’s really the explosive action, especially when the battlefield gets particularly crowded, which makes Paladins so much fun.

Valve’s iconic first-person shooter that divides players into two squads with unique heroes duking it out was first unleashed on the world as part of The Orange Box in 2007. Whether players choose to fill roles like the Engineer, Medic, or Pyro, they will have to alter their playstyle to make sure each hero’s special abilities are utilized effectively. The game’s cartoony art direction is still eye-catching more than a decade later, and each character’s unique arsenal helps to cement the game’s flashy aesthetic. Like League of Legends, the game is best played while communicating with your teammates, but it’s also possible to just run-and-gun your way to absolute victory.

The newest game on this list, Valorant was also released by Riot Games, the developer behind League of Legends. Similar to League, gamers choose from 11 unique heroes and join five-player teams to square off in a series of numerous rounds to try and destroy an opposing squad’s base.

Instead of viewing the map from above, Valorant is a first-person shooter that drops players directly in the middle of the action. Like every game on this list, there’s definitely a learning curve involved to become the most dominant player on the map, but the game’s slick graphics and inclusion of distinct weaponry makes Valorant an addictive experience.

There are numerous battle royal titles competing for gamers’ attention and the free-to-play Apex Legends has done a great job keeping its audience happy amidst all the competition. A first-person experience, Apex Legends has players control unique heroes and form four-person squads as they compete for dominance in a constantly shrinking map. Depending on your squad’s playstyle, Apex Legends can be an intense, run-and-gun experience where each player’s unique abilities are put to the test as the squad hustles to the center of the map, but it can also be a methodical, slow-crawling game where squads set up traps and wait for others to fall into them.

Set inside the League of Legends universe, Teamfight Tactics is a clever attempt by Riot to expand the franchise into the auto battler genre. Similar to the Dota Auto Chess title, players draft and optimize the ideal hero team to square off against seven other gamers’ squads. With unique items and abilities to give each hero team a different feel, players compete to be the last squad standing over a series of numerous rounds. The game originally launched as a PC and Mac exclusive, but it has since been launched on mobile devices as well, opening the title up to a larger audience than ever.

Like in League of Legends, gamers compete to control enemy territory in Planetside 2. One of the biggest differences between the two games though is rather than compete in meager squads of five, Planetside 2 features matches with hundreds of people competing for territory control in an open-world. An exciting first-person shooter game, Planetside 2 rewards players for each kill and team actions like capturing bases with experience points that they can spend to improve certain player skills or upgrade weapons. With so many players in a match, it actually behooves players to interact and communicate with their team—similar to League of Legends—rather than trying to win the match single-handedly.

Without Warcraft III, it’s likely that League of Legends would have never been released in the first place. LoL was based on the infamous “Defense of the Ancients” mod (DOTA 2 is actually a direct sequel to the mod), and a quick look back at the game makes the connections very clear.

Both games feature heroes duking it out and collecting items as they try to claim dominance over the map. Thanks to how customizable the game was, players could download map files and alter them in the World Editor—leading to numerous unique maps for players to square off in.