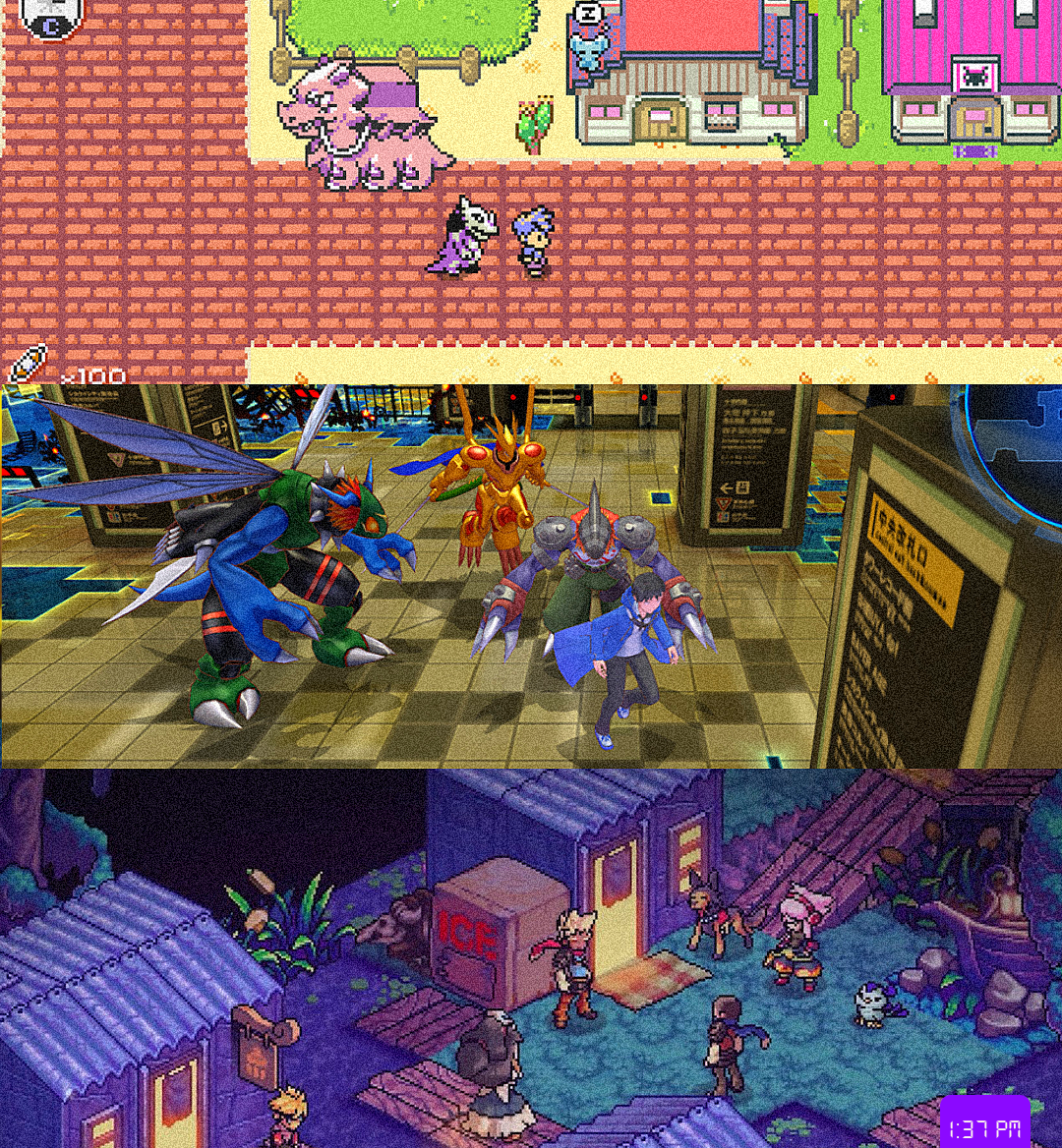 Pokémon is a giant in multiple different forms of media. When it comes to video games, the Pokémon franchise is one of the top five best-selling of all time, with an estimated 380 million in worldwide sales. This puts it ahead of Grand Theft Auto, Minecraft, Lego, and more massive names.

Naturally, something that has been as great as Pokémon over the past few decades is going to be very influential. Many games take direct inspiration from Pokémon and that’s a good thing for you if you want something similar but a break from the series.

Below, in alphabetical order, we’ve listed the twenty-three best games like Pokémon.

Although it felt disappointing to many on launch, Ark: Survival Evolved (funnily enough) has evolved into a game that people can appreciate, with its player base growing steadily. This is a great option if your favorite part of Pokémon games is trying to tame animals. Although the animals here are a little less cute and more ferocious than most Pokémon.

Developed by h.a.n.d. and published by Square Enix, Chocobo’s Mystery Dungeon: Every Buddy! is part of a franchise that was actually established before Pokémon, but is now linked with it heavily. Creatures in this game can be befriended and fight alongside you as you traverse dungeons and search for some tough battles.

Perhaps if you’re a diehard Pokémon fan, you’ll turn your nose up at the mention of Digimon. You’re well within you’re right to do so, but you’re also missing out on the chance to play Cyber Sleuth. Think of this like a Pokémon that happens in digital cyberspace where hackers reign supreme. The similarities to Pokémon are pretty glaring, too.

Dragon Quest Monsters is quickly growing in popularity over here in the west, but it’s been big in Japan for a while. Fans and critics were quick to draw comparisons to Pokémon early and rightfully so, but the game does a good job of standing on its own too. Picking up and playing or diving right into all of the unique mechanics are both rewarding in different ways.

Developed by Endlessfluff Games and released in the summer of 2020, Fae Tactics allows you to summon allies, cast spells, and just like Pokémon, befriend characters who can assist you on your journey. It’s a strategy RPG that features turn-based combat (just like Pokémon famously does) and the 3D pixel world is genuinely beautiful to look at.

Chumbosoft’s HEARTBEAT is a game that takes what Pokémon offers and takes it enough places that it feels like a must-play for any fans of that genre. It’s a top-down RPG where you play as Eve Saccato, a Conjurer from a small village. The context of the setting is that humans and Mogwai have struggled to co-exist for years, but you go on a journey that could change that.

7. 'Jade Cocoon: Story of the Tamamayu'

Jade Cocoon: Story of the Tamamayu is a game that fans of it will swear is one of the best RPGs of all time. In North America, it was released in 1999, so visually it does look very dated. But if you’re willing to look past that, you’ll find a treat in the story. Here, you can breed and fuse together Minions, and depending on how many you’ve already caught, it’s easier to catch them in the future.

Dream Drop Distance is the seventh installment in the Kingdom Hearts series. While the gameplay itself might not feel like a Pokémon game, you’re able to recruit creatures called "Dream Eaters" to help you out in fights, which is of course a mechanic many Pokémon players will know and love. This entry in the series also went for turn-based combat and the worlds can feel similar to gyms.

Like Pokémon, Minecraft is also one of the biggest franchises around with over 200 million in estimated worldwide sales, which is very impressive considering its first release was in 2011. While you might like the regular game as a Pokémon fan, what really makes it special is the "Pixelmon Generations" mod which essentially turns it into a large-scale Pokémon game.

You only have to take one look at the design style for Monster Crown to know that it was heavily influenced by Pokémon. The creators don’t shy away from that fact and have revealed that the game dives into an aspect they feel Pokémon doesn’t focus on enough, monster breeding.

If your favorite part about the Pokémon games are the monster collecting and battles and you’d like a different take on them, look no further than Monster Hunter Stories. There’s a catch-up mechanic, which means if you decide against catching new Pokémon because of the struggle of leveling them up, that won’t be a problem here. The story can be a little childish, but it’s just there to tie the gameplay together. If you walk away from this game satisfied, then it's also worth checking out its quality sequel Monster Hunter Stories 2: Wings of Ruin.

Made by German studio Moi Rai Games, Monster Sanctuary is what many critics of the Pokémon games wish they would have evolved into eventually. It feels a little bit like a hybrid of Pokémon and "Metroidvania" gameplay elements. You hatch monsters from eggs and there are a bunch of areas to explore so at the end of the day, it’s worth a try.

Nexomon: Extinction borrows so many elements from Pokémon games that you’d be forgiven for dismissing it as a rip-off, but there are still many reasons that this game is worth playing. One spin it puts on the battling is that there’s a stamina system here, so it means that even more strategy is required with rotation.

A nice way of thinking about Ni no Kuni: Wrath of the White Witch is that it’s a Pokémon game with a larger focus on a story. The story’s not there for the sake of it either. It’s genuinely gripping and enhances the gameplay. Combat can be either turn-based or active. If you’re a fan of Wrath of the White Witch, then try out Revenant Kingdom too.

Ooblets feels like Pokémon combined with the vibes of Animal Crossing and Harvest Moon. You live in a cute world where humans and creatures called Ooblets live. The art style feels like a more colorful version of some of the more recent Pokémon games. If you’re a fan of those kinds of games where a lot of its elements are within your control, then go ahead and try this one out.

Persona 5 Royal is similar to Pokémon largely because of its JPRG roots. Some of its foundational mechanics can feel similar to Pokémon – the hundreds of monsters on the roster, themed dungeons that resemble gyms, and turn-based combat. Despite this, it also sets itself apart from the pack with many features. This is definitely the definitive way to experience one of the best JRPGs in recent memory.

Once again, although the entire game doesn’t have the same atmosphere as a Pokémon game here, some key elements in it will definitely be familiar to Pokémon fans. Namely, catching demons, raising them, and using them in battle. One key difference here is that the battle systems are more complex, which might be something you welcome.

In this game, you play Beatrix LeBeau. As a rancher, your goal is to capture, raise and breed slimes, which then allows you to earn currency so that you can explore the world, where you’ll encounter more slimes. This game is for those who enjoy this process over battles because there are none of those here.

This game stands out on this list. While many of the games here allow you to recruit creatures to battle alongside you, with Suikoden, you have to build an army of warriors. For many, this is where the similarities to Pokémon end. The game is not as childish as Pokémon can be and that might be a welcome change for some, or it might not be what you’re looking for.

Developed by Crema, Temtem is a goal that was made with Pokémon in mind, to some extent. The idea was to improve on some of the old mechanics and give the genre a refresh. As a result, this game feels as if Pokémon was finally given a massively multiplayer online revamp, which might be music to your ears. Since this game is technically still in early access, it’s constantly getting new updates too.

World of Final Fantasy: Maxima is an upgraded spin-off of Final Fantasy and takes place in Grymoire, a world of coexisting Final Fantasy settings. The land is inhibited by Lilikins, which are cute and resemble Pokémon. This is an especially good pick for those who are already familiar with and fans of the Final Fantasy series because some familiar faces return.

Before YO-KAI WATCH 4 was even released, gamers who wanted a dose of Pokémon-like gameplay from somewhere other than the massive franchise looked to YO-KAI WATCH 3. Unfortunately, if you’re reading this, you might need to do the same, because the fourth installment in the series is only available in Japan right now. Your Yo-kai watch allows you to see, befriend and summon Yo-kai, which can evolve.

This is a unique entry on this list because while the vast majority of games here have a lot of similarities with the actual Pokémon games, Yu-Gi-Oh! Legacy of the Duelist: Link Evolution actually resembles the trading card game a little. Combat here is nuanced and requires great strategy.