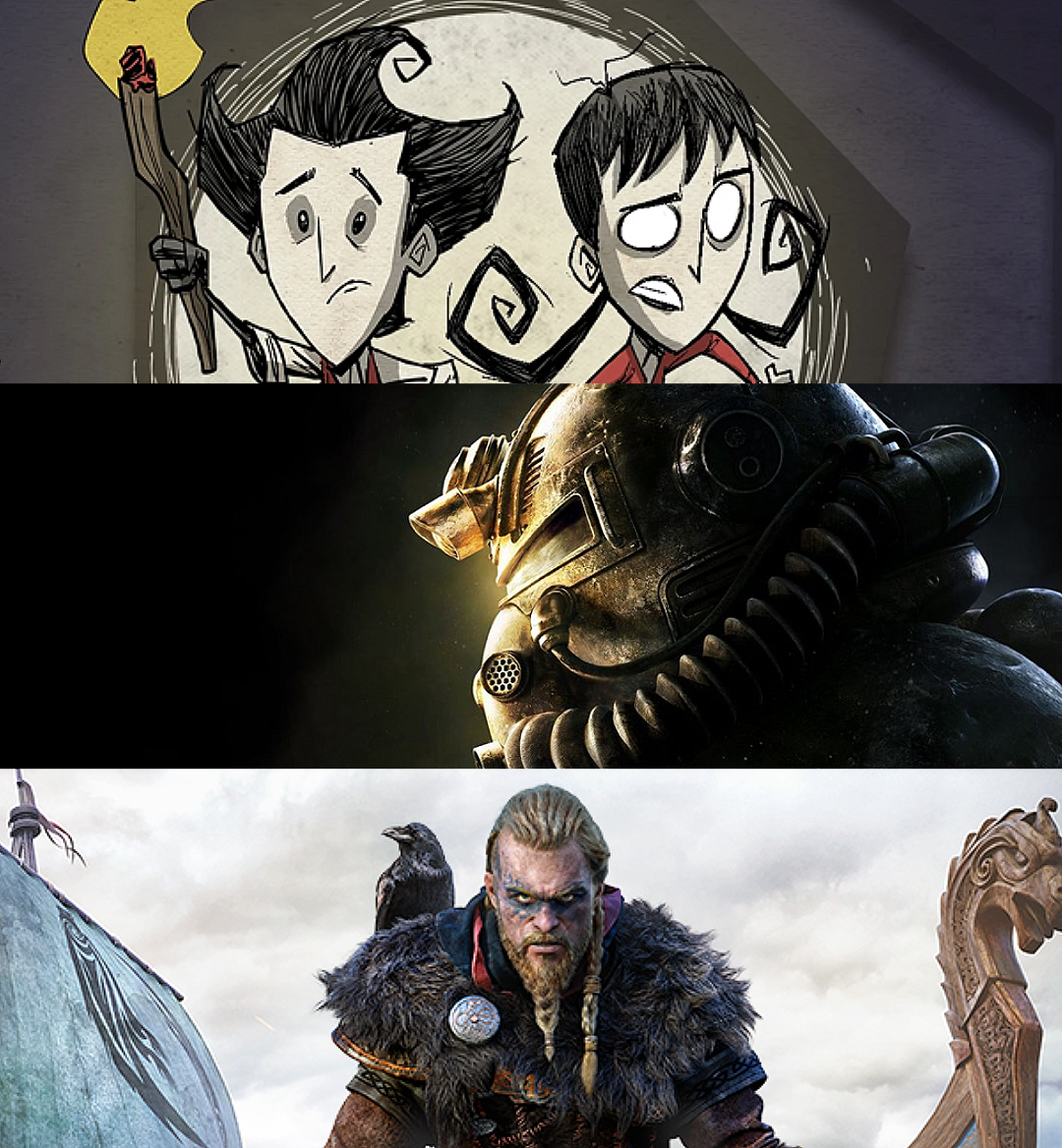 So before we get into our list of the best games like Valheim, here's a primer on what that main title in question entails.

Released in February of 2021 was Valheim, a survival and sandbox game developed by Swedish developer Iron Gate Studio. Despite being worked on by a very small team and still being in early access to this day, the game has seen incredible commercial and critical success. As of April 2022, the game has sold 10 million units, with half of that number coming within a month of it dropping. Critics are calling it a breath of fresh air, praising its gameplay and storytelling.

The game has its players exploring a massive world that is heavily inspired by Norse mythology and Viking culture. As you traverse the world, challenges become harder, but materials also get more valuable. The game features big boss fights, a creative crafting system, combat that requires and rewards patience, planning, and skill, a great food system, a beautiful world, and a lot more. For those reasons and more, finding a game quite like it is difficult, but that doesn’t stop us from trying.

Below is a list of 23 games like Valheim, whether they compare to it in terms of general tone, genre, gameplay features, and more. Check it out below. 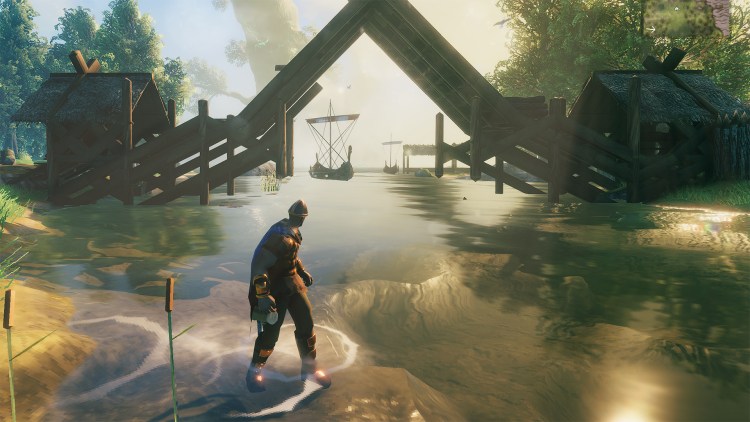 Of course, none of the Assassin’s Creed games are survival games per se, but the title of this one should give away why we’ve decided to include it here. Valhalla is a game that, just like Valheim, is greatly inspired by Norse mythology and heavily features Viking culture too. While many AC games have missed the mark for many over the years, some of their recent efforts have been great and regardless, Ubisoft is praised for their extensive research into specific time periods so that their worlds are as accurate as possible. If you liked the environment and general tone of Valheim the most, then you’ll appreciate this step up into the same world.

Developed and published by Funcom, Conan Exiles is a survival game that many have noted plays extremely similar to Valheim. The two games have a lot of similarities, notably gathering resources, building a base for your own protection, and being able to do this with friends or on your own. If you’re into the features of Valheim and want to see them somewhere other than the Viking setting, this game is perfect for you.

Craftopia is an open-world survival game, but that doesn’t really do it justice. It’s also inspired by many other genres and takes pride in that fact. You can chop trees and mine stones like a sandbox game, keep regenerated like a survival game, explore like an open world and gather and use resources like in a farming game. The character customization system here is great too.

This is one of the more popular games on this list. It’s the co-op expansion of Don’t Starve, which allows you to play with up to five other people or if you get a mod, dozens and dozens. The aim of the game is simple and a big clue is in the name. You’ll spawn somewhere and are tasked with surviving, which means gathering resources, creating a base, feeding yourself, and fighting for your life.

Developed by The Molasses Flood, Drake Hollow is a game where players are taken to the world of The Hollow. There, you’re tasked with protecting yourself and the locals (Drakes) from enemies. The Drakes can not only die from fighting enemies, but a lack of sleep, hunger, thirst, and even boredom. Drake Hollow is of the more eccentric picks you'll come across as far as games like Valheim go.

When you load up DYSMANTLE, you’ll find yourself as the sole survivor in a post-apocalyptic world. However, that doesn’t mean you’re alone. Enemies make living difficult, so you’ll have to craft weapons on your way to building your house to stay safe. The vast majority of the environment can be broken down. This is a survival game with key RPG elements that'll keep you busy on your quest for the best games like Valheim (that obviously brought you here, thankfully).

Fallout 76 wasn’t the most well-received game when it came out, but since then, Bethesda has made a point of improving it to where it’s a genuinely different experience now compared to on release day. The open-world has been greatly impacted by a nuclear war and you must travel through it, meeting interesting characters on your way.

Developed and published by Creepy Jar, Green Hell is a game that takes place in the Amazon rainforest. You’re not just visiting though – you’re trapped there and must use your initiative with any survival techniques you know to survive. Maintaining physical and mental health, building shelter, and gathering food and other resources is a tough balancing act.

Obsidian Entertainment, Inc. is mostly known for their single-player, story-driven RPGs, but here they depart from that formula a little. The concept of this game is unique. You and up to three friends have been shrunk to the size of an ant and must find out why while maneuvering the now-grand environment that is a backyard.

Hideo Kojima’s departure from Konami in 2015 was the cause of much debate and Metal Gear Survive certainly suffered as a result of it. Any of its downfalls were blamed on the lack of Kojima’s input. With that being said, this is a decent game if you’re looking for some good survival. It’s set between Ground Zeroes and The Phantom Pain and has a multiplayer experience that is somewhat new to the series.

It’s unlikely that you haven’t heard of Minecraft, considering it’s the best-selling video game of all time, an estimated 73 million units ahead of Grand Theft Auto V which takes second place. When it comes to sandbox games with survival elements, it’s really impossible not to give this game a mention. If you want an experience even more like Valheim, there are plenty of Nordic-based servers for you to explore.

Niffelheim is a place that, in Norse cosmology, overlaps between Niflhel and Hel. In layman’s terms, it’s inspired by the same things that Valheim is. For that reason alone, this game might be worth picking up. It's not so similar that it feels like a game in the same series, but the tone of it is similar with many of the same gameplay elements. As far as games like Valheim go, Niffelheim is a worthy selection that differs in its ancient inspirations.

Outward is yet another open-world survival game. This one sees you exploring Aurai with the highlight on the survival elements, which it does in a very hardcore way that fans of that genre will appreciate. Going out in colder weather means you run the risk of getting sick, damage from battles can give you infections and food can spoil. Outward offers a great experience to embark on if you love games like Valheim and want to take the survival aspect up a notch.

The unique part of this survival game is that you start out on a 2x2 raft. From there, the way you gather resources is by fishing them out of the ocean. You can leave your raft, but the ocean not only has dangers, but a has a current which will keep your raft moving away from you constantly.

Rust is one of the older games on this list. It was officially released in 2018, but before that, was in early access for about five years. For that reason, it isn't as refined as many of the options on this list, but that’s what so many love about it. Just like Valheim, this game doesn’t take itself too seriously.

Made by the appropriately named Undead Labs, State Of Decay 2, like its predecessor, is a survival game that sees you fighting hordes of zombies. The game is praised for its level of difficulty, immersion, and combat. If you try this and are a fan, you’ll be delighted to know that a third game in the trilogy is on the way.

Many games on this list are similar to Valheim because they’re survival games with many of the same elements. Subnautica is on here for the same reason, but its unique selling point is that the game sees you spend the majority of your time underwater. There are also multiple modes to pick from which change in difficulty.

Terraria has a 2D look, which might be off-putting to some, especially because that’s not what Valheim does, but that shouldn’t completely steer you away. The game does a great job of being an immersive survival game and just like Valheim, you can be raided at any time, adding some suspense to general gameplay. If you’re a fan of Don’t Starve Together (which appeared earlier on this list), you might be interested in the crossover event between both games that took place a while back.

The Forest is easily one of the most well-received and beloved survival games in recent years. You are a survivor of a plane crash and find yourself in a forest. The enemies here are cannibals who you must fight through because they have kidnapped your child. The days here are for gathering resources and setting traps and the nights bring battles with them. You can play with seven other friends, too. It's safe to say you'll get a ton of mileage of out this pick on this trustworthy list of the best games like Valheim.

On top of all of the survival elements that most games offer these days, The Infected also boasts body temperature mechanics, which is a nice addition for fans of the genre. The game’s weather cycle is also something to be admired, if you can do so while fighting off zombies, that is.

Developed by Hinterland Studios, The Long Dark is a first-person survival game that puts you in the shoes of a pilot who has been forced to crash land somewhere in Canada and fight off the cold and everything that comes with it in the wilderness. Caloric intake, fatigue, and wind chill are all factors here.  Be careful though, because dying here means losing everything you have.

If what you liked about Valheim in addition to all of its great gameplay features was how it feels a little light-hearted, then perhaps The Survivalists is the best option for you. The world is colorful and while survival is in the name and key, you never feel like everything is so against you because of the soft edge that the game has. It’s a great one to play with family members because of this and its support of four-player co-op.

Last but not least is The Wild Eight. Like some other entries on the list, this game puts you in the shoes of a plane crash survivor. If that weren’t traumatic enough, you find yourself in the blistering cold of Alaska where you not only have to survive in the harsh environment but find out just why you’re there in the first place. It’s called The Wild Eight because you can play with up to 7 other friends, but the single-player option is enjoyable too.