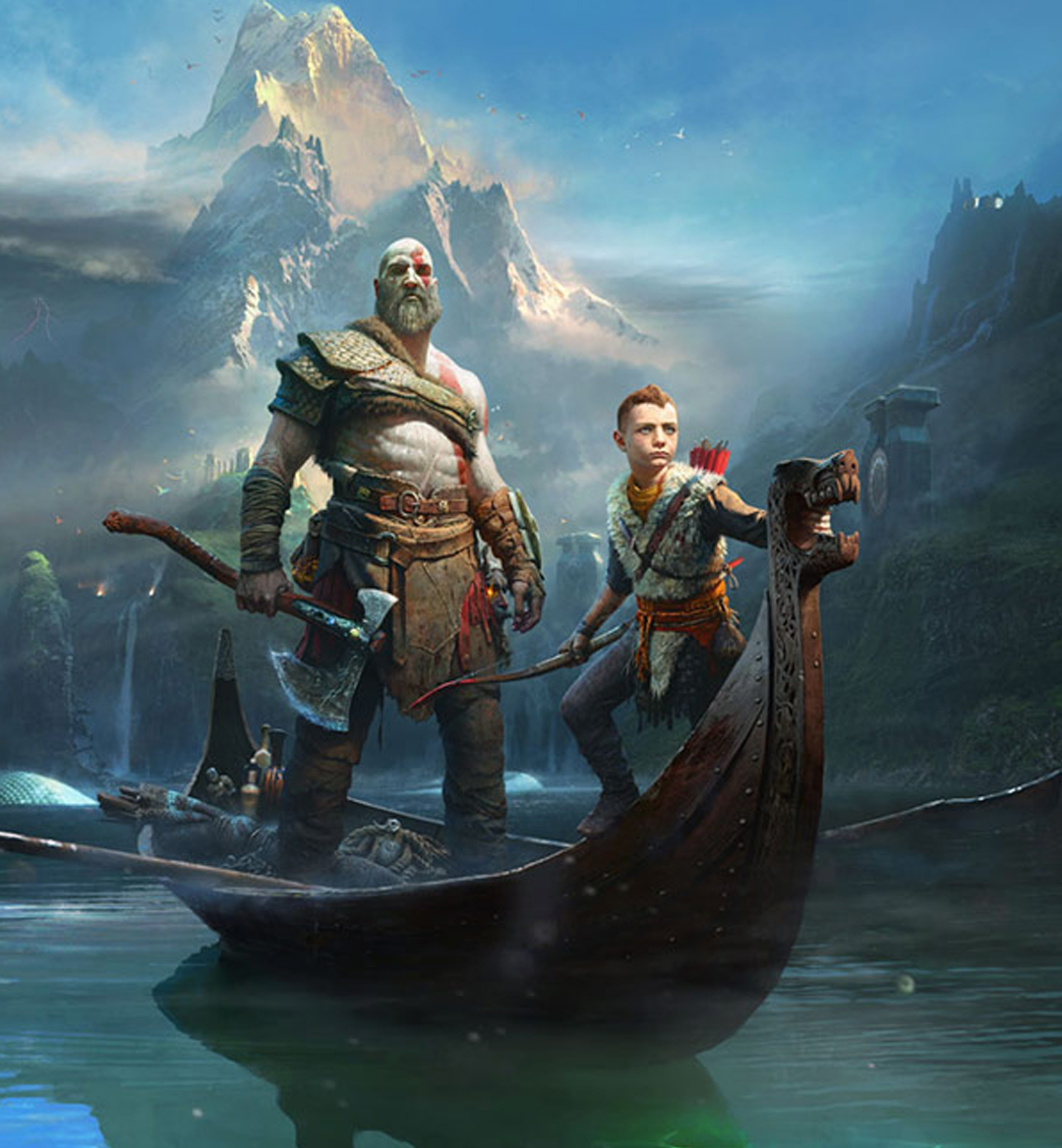 Video games are a cultural staple at this point in our culture. What started as a fringe market for a niche group of young people has now become a phenomenon. Gaming has now become the most significant entertainment industry, surpassing movies, TV, and music.

With the pandemic lockdowns forcing people to stay in, gaming has grown even more and is expected to continue to do so.

The industry’s evolution and growth have come from these consoles' improvements with each new generation. What makes consoles stand out is the quality of the games they exclusively offer only on their platform.

One of the most popular exclusives is, without a doubt, God Of War. The God Of War franchise has sold over 51 million copies worldwide, and they have consistently ranked as among the best-selling videogames for Sony Playstation consoles.

God of War, released in 2005, is ranked in the top 15 of all-time best-selling PS2 videogames with over 4 million copies sold.

God Of War III, which was released in 2010, is the 9th best-selling PS3 game of all time with over 5.2 million copies.

God Of War (the version released in 2018) is the best-selling PlayStation 4 game of all time, with over 19.5 million copies sold.

As you can see, the popularity of the God Of War franchise has continued to grow with time in parallel with the growth of gaming. This franchise is now synonymous with PlayStation and is an example of successful exclusives.

So what is God Of War about?

God Of War centers around Kratos, a man whose father is Zeus and whose mother is Callisto. When Kratos was born, Zeus’s wife Hera was angry at Zeus for having him. She ordered that Kratos had to be killed, but he ended up being sent to the Spartans along with his mother. There, his mother gave birth to his brother Deimos. Kratos and Deimos grew up training in Sparta. Later on, Zeus learns of a prophecy that says one of his battle-marked sons is going to kill him in the future.

Deimos’s birthmark leads Ares to suspect that Deimos is the one who will kill Zeus in the future. Due to this prophecy, Zeus sends Ares to find and kill that son. Kratos tries to save Deimos from Ares but is ultimately defeated and left with a scar after being hit by Ares. Kratos vows to take revenge for his brother, going through the ranks of the Spartan army until he becomes a general. He then marries Lyssandra and has a daughter, who has a skin disease.

Due to Spartan tradition, which states that children must not have any weaknesses, he is ordered to kill her. Not wanting to do this, he goes on a mission to find a cure named ambrosia. He gives his daughter the cure, but he gets confronted by a barbarian army in the process. Found in a life or death situation, Kratos asks for help from Ares and vows to serve him. Ares helps him and gives him the famous blades of chaos, weapons attached to the body of Kratos. Kratos goes on to serve Ares in many missions.

During a raid in a village, he is warned not to enter a particular part from an oracle. He ignores the oracle’s advice and immediately kills everyone there, only to realize that he had killed his wife and his daughter. Realizing that Ares has done this, Kratos renounces his service to him and vows for revenge. The oracle paints the body of Kratos with the ashes of his wife and daughter, giving him a pale look that earned him his nickname as the “Ghost Of Sparta.”

As time goes on, Kratos battles Ares and, upon locating it, opens the Pandora’s Box. This enables him to obtain power that helps him defeat Ares. Realizing that he will never be free from his nightmares, he attempts suicide but is saved and then named God Of War.

Many years after he has defeated the Olympian Gods, Kratos has started a new life hidden in the lands of the Norse Gods. His wife passes away, and he begins a journey alongside his son Atreus to fulfill his wife’s last wish, which is to scatter her ashes at the peak of the highest mountain they know. After many battles, they fulfill her last wish, but not before Kratos has to reveal to his son that he is a god and that his future may be complicated due to this fact.

This is a short summary of the plot that entails the God Of War story, so now let’s get into the ranking of the best God Of War games.

There are eight installments in total, with the ninth installment being planned to be released in 2022. The new God Of War game will be titled God Of War: Ragnarök. Same as with the previous release, the new installment will be based on Norse mythology, breaking away from most previous installments based on Greek mythology.

God Of War: A Call From The Wilds is a text-based game released through Facebook’s Messenger. The game revolves around the son of Kratos, Atreus. The game is intended to show Arteus go through his first adventure. The player can choose which story he is going to see by interacting through text.

As such, this game is a storytelling piece that served as a prequel to the 2018s God Of War. While this game is a welcome addition in terms of introducing fans to the character of Atreus, it isn’t really a playable adventure but instead, it is more of guided storytelling videos and pictures. As such, A Call From The Wilds ranks 9th.

This game is the first mobile game that the God Of War franchise released. Considering the fact that the capabilities of mobile platforms in 2007 were limited from a gaming perspective, this installment suffers from a lack of the graphic excitement that fans are used to seeing. The game is essentially a filler between God Of War and God Of War II. The 2D animation aside, the game’s storyline is straightforward, and the action scenes are not rewarding enough to be compared to the other installments.

Chronologically it is set six months after Kratos kills his family. Kratos is held as a prisoner and has to fight The Furies. The punishment for breaking his promise to serve Ares sets up for a good short-term story, and the multiplayer mode set up in this game made it unique. What makes Ascension look less impressive than other installments is simply that it struggles to differentiate itself. The story is good initially but it can become exhaustive after a while. The change in the way Kratos fights is also something that did not have a good effect on the game.

Chains Of Olympus is a prequel to the God Of War (2005 edition). This installment was a new take on the franchise, as it was first released for PSP. The game is a third-person adventure game with a fixed camera angle. The main weapons of Kratos are the Blades Of Chaos, and the player can win more weapons as time goes on. The action scenes in this game are good, the adaptation for the PSP screen is effective, and all of the other factors such as music and animation are also properly done. What penalizes this game is short. While the quality of the game is good, its length stops it from fulfilling its potential.

Ghost Of Sparta is the sixth installment in the series, and the fourth chronologically. In this game, Kratos is haunted by the things he has done in the past and is angry that he sees nightmares even after serving the Gods Of Olympus. His mother Callisto, tells him that his brother Deimos is still not alive.

This sets up for a very good story, as Kratos is shocked to know that the entire reason he has so much hatred is not true after all those years. He fails to save Deimos even after finding him, making him even more ruthless and angry than ever before. The weapons Kratos uses are the Blades of Athena. With a good storyline, proper game length, good action scenes, and weapons, this game is an enjoyable one. It beats Chains Of Olympus due to its length and storyline dynamics.

The one that started it all. The fact that the game went on to become one of the most popular ones of all time, speaks at least partially to the quality of the first God Of War. This game ranks as one of the top-selling PS2 games of all time. Kratos uses the Blades Of Chaos as his weapon of choice, with a second weapon added later.

With a great storyline, an innovative approach for the genre, and good action scenes, God Of War was a revelation for the industry. While it is lackluster in certain aspects compared to its successors, this installment is one of the best ones not just in the series but in the whole genre, especially considering the impact it had.

This installment was the trilogy finalization, and it was the rightful ending of the trilogy. God Of War III made the best use of the new graphic capabilities PS3 had. The game also has great music to accompany the dramatic scenes. With a storyline consisting of Kratos plotting revenge against his father Zeus, he goes on a rampage to slash anyone who is against him with his Blades Of Exile. What makes it have third place is the non-conclusive ending and simply the evolution of the games that came afterward. God Of War III is the 9th best-selling PS3 game of all time, and it still holds up well.

God Of War represents a dramatic shift from the previous installments. It is the first game not to be based on Greek mythology, but rather on Norse mythology. Here we see a version of Kratos that is older, calmer (at least in the beginning), and somewhat at peace. He buries his wife, whom he lives within the mountains together with his son Atreus. Wanting to respect her last wish, he seeks the highest peak possible and realizes that he will have to go through several challenges together with his son, who finds out that his father is not human, and therefore he is not either. Reinventing a successful franchise is not easy, but God Of War does it successfully. The game is the best-selling PS4 game with over 19.5 million copies sold.

God Of War II helped make the franchise a household. With action-packed scenes, a good soundtrack, and multiple puzzles to solve, God Of War II keeps you on your toes at all times. Kratos uses Athena’s blades to slash his enemies, namely Zeus and Ares, who have betrayed him. God Of War II holds up well to this day, and therefore remains an all-time great game.

Mobil 1 Challenges NBA2K Players to Tune Up Their Game