Everything You Need to Know About 'Call of Duty: Vanguard' 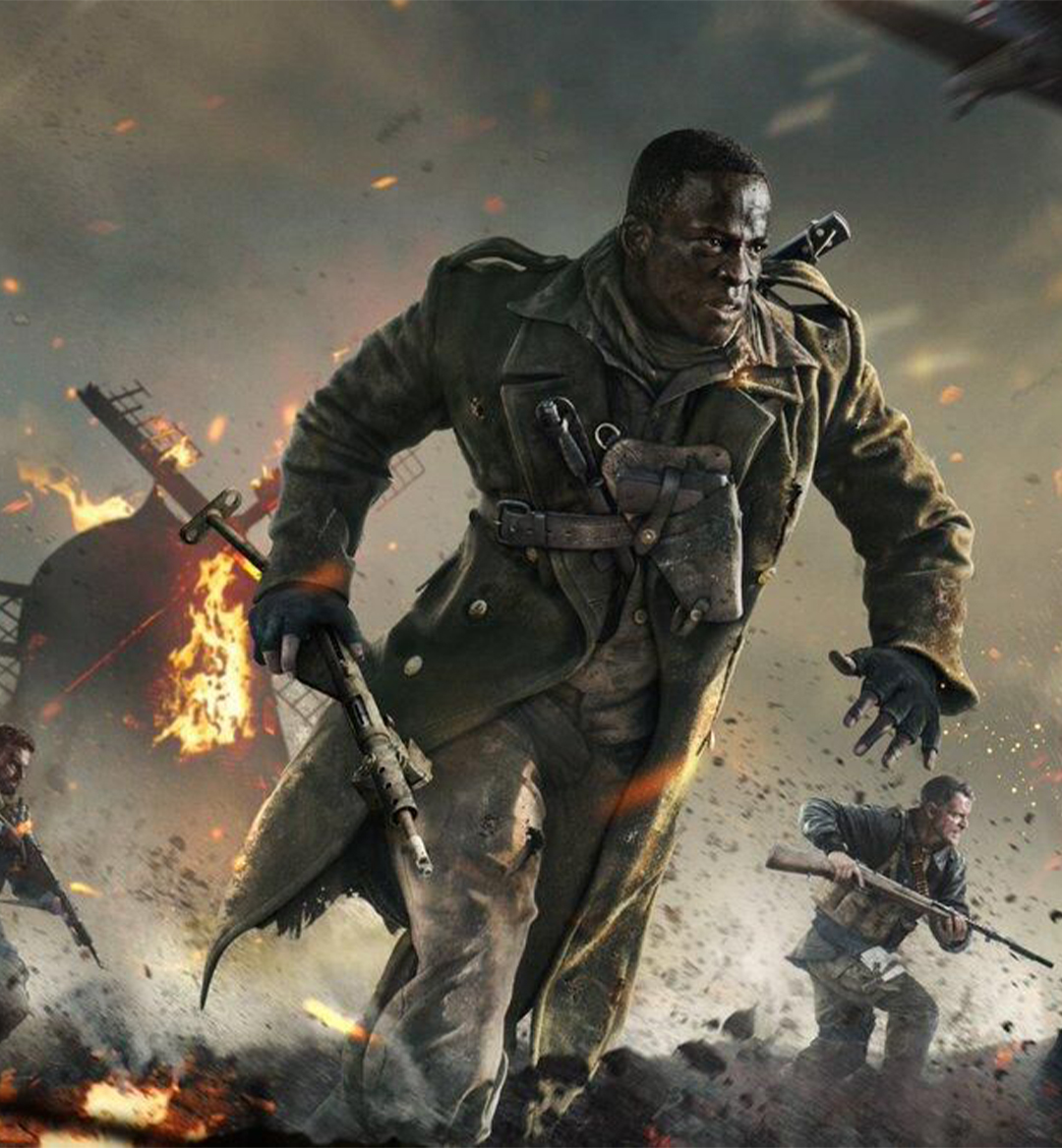 Before we were all transported to explosive battles within the Modern Warfare and Black Ops series spin-offs, the Call of Duty franchise focused on the various battle theaters that erupted during World War II. In 2021, developer Sledgehammer Games has gone back to that thematic formula to deliver a brand new experience for the Call of Duty faithful with the release of Call of Duty: Vanguard. The excitement for this entry is palpable - the rich content suite on offer for this new annual Call of Duty game can be pointed to as the sole reason for that unrelenting hype. Before Call of Duty: Vanguard finally arrives on November 5 for PS5, PS4, Xbox Series X|S, Xbox One, and PC via Battle.net, allow us to break down all the important details about the game that you must know before going in.

Call of Duty: Vanguard’s campaign will transport players to four different locations that played a major role in the most climactic battles during WWII - the Eastern & Western Fronts of Europe, the Pacific, and North Africa. You’ll command five separate individuals who are based on real-world military heroes during your time spent within the campaign’s unified plotline - Arthur Kingsley, Polina Petrova, Wade Jackson, Lucas Riggs, and Richard Webb.

Those five military men and women end up becoming the special forces unit needed to overcome a rising menace at the tail end of the great war they’re fighting in. The familiar gameplay mechanics that’ll be featured in Vanguard’s campaign include the ability to mount wielded weapons to flat surfaces and initiate silent takedowns. As far as new mechanics go, this campaign will give players the opportunity to break down certain parts of the environment and blind fire from behind cover.

At launch, Call of Duty: Vanguard will come with 20 maps - 16 of those maps will cater to the mainline multiplayer modes, while the other four will be centered around a new mode called “Champion Hill.” Champion Hill is pretty much an evolution of Call of Duty: Modern Warfare (2019) and Call of Duty: Black Ops Cold War’s 2v2 “Gunfight” mode. Champion Hill can be played via Solos, Duos, or Trio - players enter combat with a limited number of lives as they fight to become the last man standing within the confines of a squad-based deathmatch, round-robin tournament. You can expect to compete in close-quarters combat scenarios within Champion Hill’s more enclosed maps.

One of the newest features being implemented into multiplayer is a matchmaking element known as “Combat Pacing.” Players now have the ability to choose from three different playstyles (Tactical, Assault, and Blitz) in order to tackle the sort of combat they’re comfortable with. Tactical sticks to the classic Call of Duty experience via 6v6 matches, Assault focuses on balanced action via 10v10 and 12v12 matches, and Blitz really ups the ante by offering action-packed skirmishes via 24v24 clashes. The Gunsmith weapon customization system will return in an even more advanced form this time around. Plus the addition of more destructible elements and blind firing will be a part of the multiplayer chaos that will ensue once your digital boots hit the ground on the battlefield.

The famous co-op portion of Call of Duty’s content suite returns with Zombies. Call of Duty: Vanguard’s version of Zombies has been developed by Treyarch in cooperation with Sledgehammer Games. It acts as a prologue to the “ Dark Aether” storyline introduced in Black Ops Cold War. At launch, Vanguard will put forth its Zombies experience within a mode referred to as “Der Anfang.”

The signature round-based, Horde-mode feel of Zombies will be present here once again - players will have to work together to stay alive as they tackle an army of undead threats within the snowy graveyards of Stalingrad. Special Artifacts infused with Dark Aether magic can be utilized during each and every Zombies playthrough - those artifacts are The Sword of Inviktor, The Mask of Bellekar, The Horn of Norticus, and The Dragon of Saraxis. Familiar Zombies mode elements, such as the Mystery Box, Pack-a-Punch, and Perks, make their return within Vanguard. 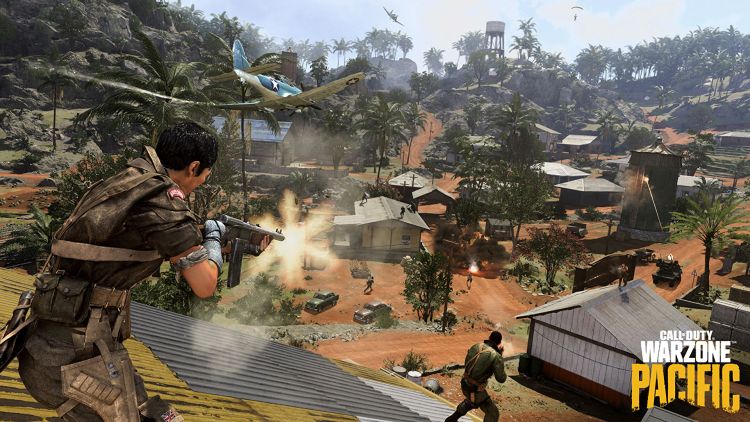 If you’ve been catching dubs in Warzone for the longest time now and hope your progress carries over once you hop into Call of Duty: Vanguard, then you have nothing to worry about. Your shared progress will come into play when you hop into the new WWII-inspired Warzone map “Caldera,” which is said to be just as massive as the “Verdansk” map. With this new map, a name change will also be implemented - Call of Duty: Warzone Pacific. This evolution of Warzone will also bring with it a wealth of WWII firearms and a new anti-cheat system called “Ricochet.” Keep in mind that November 30 will probably mark the end of the current map through the “Last Days of Verdanks” limited-time event. 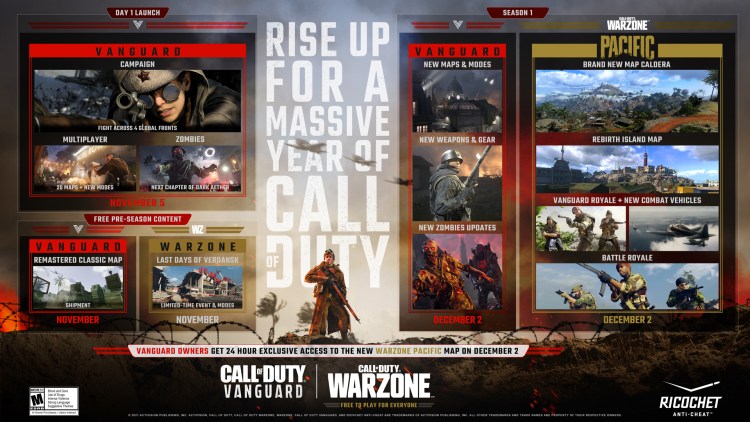 Call of Duty: Vanguard is kicking things off right with a batch of meaningful content for its very first season. We’re even getting some worthwhile preseason content in the form of a remastered classic map (“Shipment”) and The Last Days of Verdansk limited-time event & modes. That content will arrive at an unannounced date sometime in November. On December 2, players will be introduced to new maps & modes, new weapons & gear, and new zombies updates. On that date, players can also look forward to the massive  Call of Duty: Warzone Pacific update.