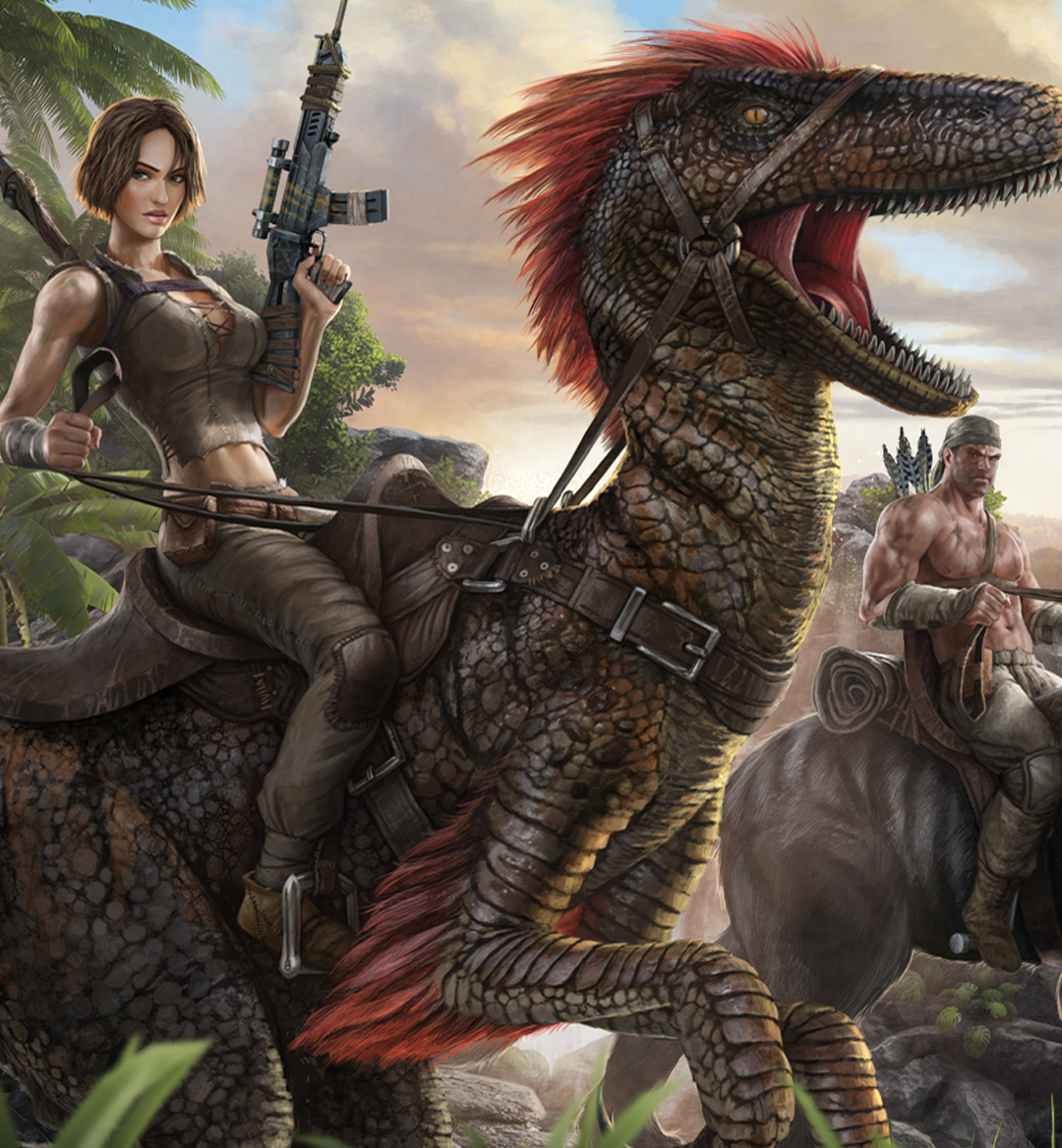 It started as a meme. When players first managed to get their hands on this new open-world sandbox filled with dinosaurs you could catch and train like Pokemon, the internet became awash with videos of characters with increasingly grotesque proportions. But players quickly moved beyond the game’s anything-goes character creator and, for the first time, glimpsed the forest for the trees. Players began playing the game in earnest and discovered that Ark: Survival Evolved was trying to distinguish their game in a market that was, at the time, saturated in survival games.

Ark, however, was different. Despite starting players out as veritable cave-men, Ark allowed players to become something more akin to science fiction. It was a game that rewarded players with a true sense of progression. It wasn’t long until the game established its own dedicated community, still going strong in 2021. What started as a joke is now anything but.

As fans wait to sink their teeth into Ark’s forthcoming sequel and animated series, the following are 15 games like Ark: Survival Evolved.

Let's go ahead and get this one out of the way. Yes, I’m sure more hardcore Ark fans will bristle at the idea of similarities between it and Minecraft but there is a distinct thoroughfare connecting the two games. To be completely blunt, there probably would not be an Ark: Survival Evolved had it not been for Minecraft.

Of course, the same can be said for dozens of games. Minecraft’s popularity was such that game developers wanted to create their own flash-in-the-pan success. Ark was one of a few that managed to do just that.

In both games meticulously collecting and managing resources early on paves the way for a more interesting experience. While crafting might be a bit more grounded in Ark, a kernel of Minecraft is still present.

It isn’t entirely certain if Facepunch Studios, the developers behind open-world survival game Rust, meant for their creation to be taken seriously.  On the one hand, the game starts you off completely naked with randomized genitals. On the other hand, the game also randomizes your race and gender, a feature that was subject to many cultural think pieces when players first noticed it.

It was partially the controversy surrounding Rust that catapulted the game into its initial success. While its success has since tapered off, it has managed to maintain a sizeable player base.

Like Ark, Rust gives players a sense of progression. Each player starts off naked and afraid with the potential to eventually become a local warlord. Instead of dinosaurs, however, players have to navigate bears, wolves, and the occasional griefer. A bit more mundane but definitely enough to keep things interesting.

One of the more interesting survival games on this list. While other games give you a map to explore and exploit, Raft players are confined to a, well a raft. Players can build up their raft by adding a number of amenities, all the while fighting back against food-stealing birds and raft destroying sharks.

The entire game is tongue-in-cheek but not enough that it takes away from the game's core conceit. Raft’s bread and butter is all about cooperation, which makes it unique in a field of games almost entirely focused on sabotaging others.

This one is for those players who love Ark’s end-game science fiction aesthetic but not too keen on the early game’s primitive setting. Osiris cranks the sci-fi up to an eleven by putting the player into a distant star system teeming with alien life.

Players have several planets, each with its own unique ecologies, to explore and draw resources from. Base building is a must, for the successful player.

The game has been in early access for a number of years, and while it still suffers from the occasional glitch, it is polished enough to see what the developers at Fenix Fire Entertainment were trying.

Perhaps the most popular entry on this list. No Man’s Sky has come a very long way, largely thanks to developers Hello Games' attempt to further flesh out the title post-release. While the game was initially criticized for being a mile wide and an inch deep, today the game has grown into its own. Players are put into a procedurally-generated universe, technically a multi-verse, of endless planets to explore and extract from. Like other survival games, base-building is an important factor as well as managing resources for your spaceship. Released in 2016, No Mans Sky is proof that survival games can escape Minecraft’s shadow.

A survival game in the purest sense of the word, The Long Dark is a cult classic in the making. It puts players in the heart of a frozen wasteland that might or might not be in the midst of a globe-spanning apocalypse.

Unlike other games on this list, The Long Dark has a narrative, in which the main player tries to find his missing ex-wife in an unrelentingly brutal setting. The colorful cast of characters is only icing relative to The Long Dark’s gameplay. Players must scavenge scarce resources to protect against hunger, illness, the cold, a relentless wolfpack, and even more deadly killer moose. While the game warns that it shouldn’t be used as a survival guide, there is something genuinely real about the game and its take on survival.

A game that emphasizes the dark side of survival. SCUM is brutal, violent, and highly addictive. Like The Long Dark, the characters are fragile and players have to worry about everything from hunger to sickness. Unlike The Long Dark, however, the primary enemies are other people, rather than the elements. Players also have to worry about zombie-like creatures that randomly pop up.

No list of survival games is complete without at least one zombie-focused game. While the zombie game market is just as saturated a market as survival games, DayZ manages to fit comfortably into both.

One of the oldest games on this list, DayZ was released in 2013 to a fair amount of hype. While other games came along and siphoned off some of DayZ’s dedicated fans, the game still commands a respectable player base, large enough for the developers at Bohemia Interactive to continue cranking out content.

From the hordes of zombies to opposing players trying to kill you, more than likely you will not survive for long. Luckily survival isn’t the point, at least not entirely. The game is about getting as good of a start as one can in order to do a little better, see a little bit more than they previously were able to. It’s a survival game about incremental growth which makes it the realist and most frustrating entry on this list.

An underrated entry that has been called by some fans as the most difficult survival game, Green Hell puts players in the middle of a lush rainforest. While players won't have to worry about the blistering cold, there is still an overabundance of natural factors that can kill you. Instead of killer moose, players have to contend with crocodiles, instead of a bad tin of food, players have to worry about keeping their sanity. Maintaining one’s sanity is one of Green Hell’s core conceits. It adds a bit of Lovecraftian flare.

A classic case of a more popular game coming along to eat an older game’s lunch. In many ways, Orion Prelude was, well,  a prelude to Ark: Survival Evolved. The game heavily featured science fiction elements. It also had players go up against dinosaurs. While it probably isn’t winning any awards, Orion Prelude at least showed that dinosaur-based gameplay didn’t die with Turok.

The Forest encourages players to survive long enough to rescue their son from the clutches of the game’s vicious enemy. In order to do that, base building and maintenance is a must, as well as exploring your surroundings for clues and resources. It’s a straightforward game that has had a significant impact on the survival genre. It sold millions of copies, enough for a sequel which is currently in the works. While the game might not have dinosaurs it more than makes up for it with a compelling narrative.

Another game that made a big splash immediately after release. Conan Exiles is all about surviving in a harsh environment while making adversaries of fellow players. The game gives you the option to ruin other players' bases even if they aren’t currently playing. It’s a mechanic that promotes rivalry among players which is one of the most alluring aspects. While there aren’t dinosaurs, per se, there is a copious amount of roaming elder gods which, in my summation is an even trade.

If Ark: Survival Evolved leans more toward science fiction, Savage Lands is geared more toward fantasy. It takes place in a world where players have to navigate a world brimming with strange creatures. It isn’t just beasts the player must be wary of. The land itself is gray and cold and players must manage their internal temperature. This requires an interesting micro-management of the materials you collect. It isn’t exactly groundbreaking material but it is fun.

One of the few AAA survival games that is actually as good as games from independent studios. Far Cry Primal, arguably the best Far Cry simulates the kinds of player-versus-player conflict you might see in other games on this list. You are members of a nomadic tribe that has foolishly chosen to establish roots in an area contested by other warring factions. It’s up to you as the player to help your tribe thrive while eliminating anyone that opposes you. To do this, you can employ help from local wildlife. Everything from ferrets to sabretooth tigers are potential allies in this game.

Instead of extreme cold or heat, radiation is the ever-present danger in this 2015 game. Radiation Island is a somewhat tongue-in-cheek spoof of the survival game boom of around that time. Because of that, Radiation Island borrows a little bit from other games on this list. Players will have to scavenge for tools while fending off zombies. Despite its comedic slant, the game knows just when to give players a proper challenge, which is why it belongs on this list.