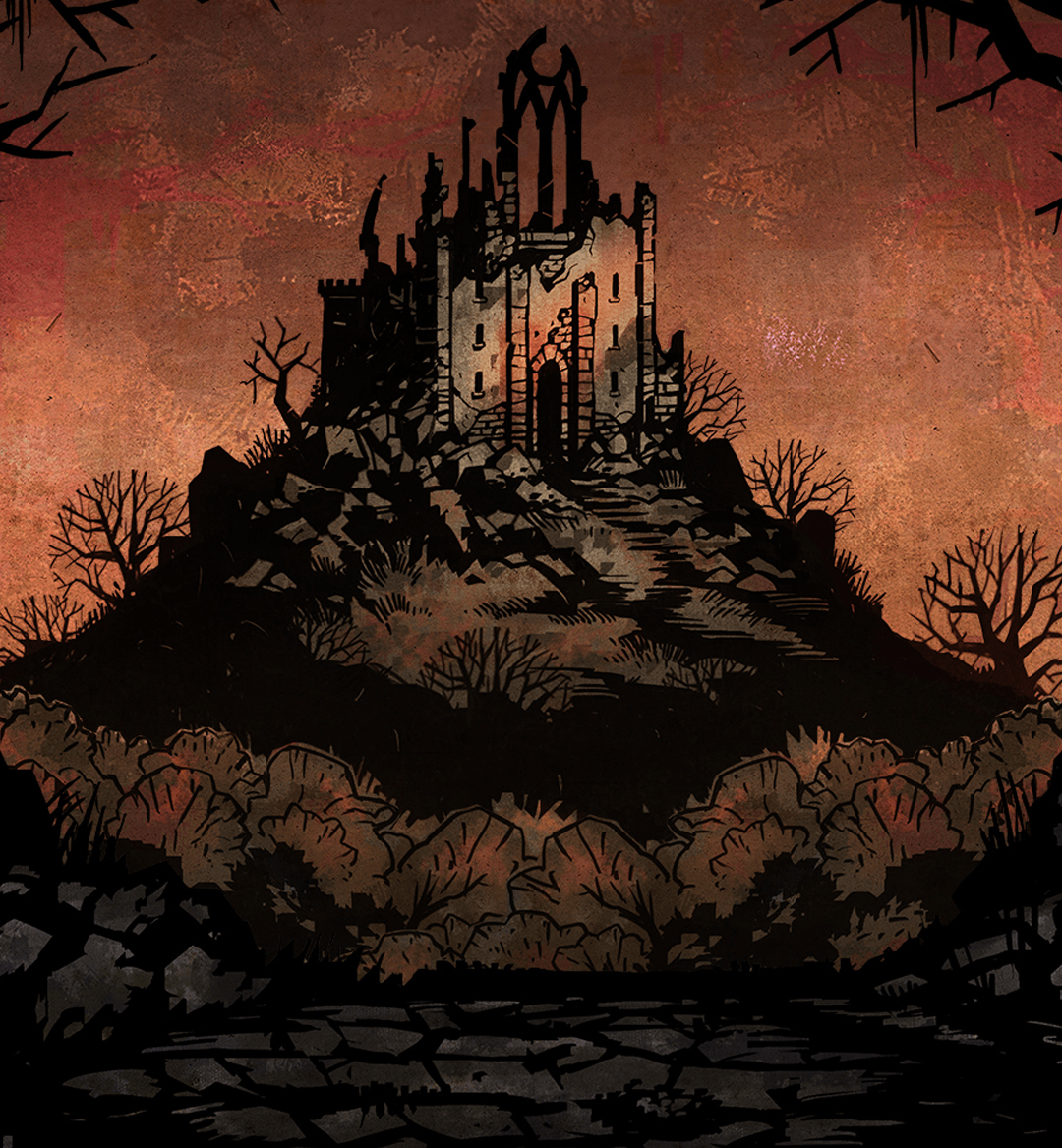 Most depictions of fantasy worlds fall somewhere on a spectrum. You have your bright, gleaming fantasy settings, as depicted in parts of the Lord of the Rings, and you have stories like Willow, that fall somewhere in the middle, not quite dark but far from bright.

Darker fantasy stories, the kind with bleak, almost dystopian narratives, often fall into the trap of sacrificing fantasy elements for settings grounded in reality. Take a Song of Ice and Fire, for example. While some magic is present, it’s a far cry from other tales of sword-and-sorcery.

But not all dark fantasy stories follow the Game of Thrones playbook. Darkest Dungeon, for example, depicts a dark and twisted world that also happens to teem with magic.

Released in 2016, Darkest Dungeon is part of the indy explosion, that in many ways, is still going strong to this day. Darkest Dungeon, while not exactly genre-defining, is considered a happy addition to an exclusive list of games.

This one might be a bit difficult getting your hands on, which is unfortunate given the massive cult following behind Guardian Heroes. Originally released on the Sega Saturn, Guardian Heroes is best described as a side-scrolling beat-em-up, similar to Darkest Dungeon. While the fantasy setting is a bit more cartoonish, the game’s combat system is as feature-rich as Darkest Dungeon. Each character has their own set of attacks and powers that completely changes the dynamics of combat.

While Guardian Heroes might not have the aesthetic flair of Darkest Dungeon, overall, it stands up even to this day.

Another Indy game that comes courtesy of Kickstarter. Battle Chasers: Nightwar is another role-playing game that takes place in dark fantasy, though not quite as dark as Darkest Dungeon. Players can choose from a wide array of warriors who utilize their own unique powers against the forces of evil. It’s a recognizable formula but one that is particularly geared toward this game’s colorful cast of characters.

One of the few games on this list that can go tit-for-tat against Darkest Dungeon, at least in regards to the atmosphere, but don’t let the setting fool you. While the game is undoubtedly dark fantasy, it does cut the dreariness with a bit of fun.

Battle Brothers takes cues from several role-playing games. While more grounded in reality than Darkest Dungeon, the game features a cast of characters, each with their own dark stories. While the gameplay can get a bit repetitive at times, that’s only one of a few squabbles for an otherwise impressive indy game that was clearly meticulously built by its developers.

Slay the Spire distinguishes itself with a unique combat system that utilizes cards, an element that adds a bit of luck to a system that emphasizes strategy. Slay the Spire can be a bit overwhelming for those not used to these kinds of in-depth games. The learning curve for this game is high, but when it clicks, it clicks. The game is highly open-ended. Players can go about any number of strategies to progress through the game.

Those unfamiliar with either Darkest Dungeon or Mad Crown probably won’t be able to tell the two apart in a side-by-side comparison. The two games share a number of visual cues though their stories are quite different. Mad Crown tells the story of a fallen empire and the player’s attempts to elevate themselves to the king. Like many other titles on this list, Mad Crown has been called a two-dimensional Dark Souls. Mad Crown, however, largely lives up to the description. It, like Dark Souls, emphasizes a decaying realm and the bleakness that entails. Mad Crown is the common-sense follow-up for those looking to scratch the Darkest Dungeon itch.

Vambrace: Cold Soul is what you get when you combine Vikings with the undead. But Vambrace is much more than yet another story about the undead. Its fantasy setting puts players in a cursed world that different factions try to navigate. The voice acting is top-notch, only outdone by its smooth animations. The combat and gameplay are what one would expect from a typical turn-based game, but that doesn’t mean Vambrace: Cold Soul isn’t worth your attention.

Deep Sky Derelicts gives the distinct impression that the developers either grew up in the 80s or are heavily influenced by it. While the game mimics Darkest Dungeon’s aesthetics, that mimicry is only surface deep. Combat makes the game look as if you are reading something out of a comic book, and the accompanying music is retro.

This is another game that uses a kind of card-based system for combat. Powering up the members of your team is more than just disseminating points. Players have to be strategic if they hope to survive against the game’s well-designed enemies.

When ultimately boiled down, Vagrus: The Riven Realms is a game about the dangers of travel. Players had a good idea of what the game is about, even before its July 22 release date. Players will be part of a caravan of nomads making their way through a continent teeming with monsters, bandits, and otherwise unsavory individuals. It’s up to the player to make decisions and do what is best for the caravan. For those who love the management and aspect of role-playing games, this is the game for you. There is quite a bit of anticipation for this game, as its release date draws near, here’s hoping Vagrus: The Riven Realm can live up to the hype.

If the folks behind the Legacy of Kain series were inclined to bleed that franchise further and make an RPG, I imagine it would look a lot like Iratus: Lord of the Dead. But the game features a lot more than slowly-mutating vampires and soul wraiths. Iratus puts players in the middle of a conflict between the forces of good and a fallen wizard. The thing is, though, players will be on the side of the fallen wizard. Players are tasked with helping the titular Iratus rebuild his power and armies by slaying the living that seeks to challenge him.

Dead in Vinland could easily rest on its crisp animations and voice acting, but the game goes further by giving players an in-depth RPG experience. Players are tasked with building a community while fending off those who seek to take your resources. The game gives players the option to fight or appease enemies though they might find themselves in situations where violence is a certainty.

Should players choose to fight, combat is technical but doesn’t have a steep learning curve. Dispatching enemies is based on teamwork and how prepared each of your characters are. This requires a level of meticulousness on the player’s part.

Mistover has a slightly cuter aesthetic, compared to Darkest Dungeon. That is mostly thanks to the cherubic character models developers plopped in the games disturbing atmosphere. The juxtaposition can be jarring at first, but most players will learn to ignore it as they delve into the Mistover’s gameplay.

Released in late 2019, Mistover takes cues from several role-playing games. It’s another dark fantasy game that features a colorful cast of characters that have a tendency to clash with the game itself. But that’s only one of a few squabbles for an otherwise impressive indy game that was clearly meticulously built by its developers

A game that combines early Legend of Zelda and Darkest Dungeon into an open two-dimensional world, players have the freedom to tackle the story in any way they see fit, and the game encourages open-ended gameplay. Players are not anchored to classes and are instead encouraged to create their own fantasy builds.

Developers seemed to have been inspired by various elements from different games, such as Escape From Tarkov’s injury management system and applied them to Stoneshard.

For the most part, it works. Stoneshard remains one of the most in-depth and sophisticated RPGs on this list. It manages this without overwhelming players.

The game is procedurally generated, which means not every playthrough is going to be the same.

Chasm is a dungeon crawler that uses sprite animation to add a dollop of nostalgia. Typically, games that rely heavily on nostalgia aren’t anything to write home about but Chasm is the exception to the rule.

The game offers a procedurally-generated adventure, with a vast pool of enemies and obstacles to ensure players don’t get bored. Much of the game takes place in underground caves and caverns, each of which manages to offer an array of challenges.

At no point does the game become too difficult which may be good for new players but a point of concern for players more used to this kind of gameplay.

Legend of Keepers, much like Darkest Dungeon, is an RPG that doesn’t hold your hand. Players are expected to familiarize themselves with both the world and the gameplay, both of which are best described as being a bit involved.

Pre-fight prep is a significant aspect which means new players will have to contend with a bit of trial and error. But once players learn the ins-and-outs this is among the most rewarding games on this list.

No list of turn-based RPG is complete without mentioning Final Fantasy Tactics. While not as dark as Darkest Dungeon, Final Fantasy Tactics does place in a world that, for Final Fantasy, can be considered particularly grim. Players must learn and exploit both the weaknesses of enemies and the strengths of allies. Tactics is a timeless game that continues to impress players despite its age. Those who conquered Darkest Dungeon and are looking for a new adventure need look no further.

buy now
Slide 1 of 3
Did you like this article?