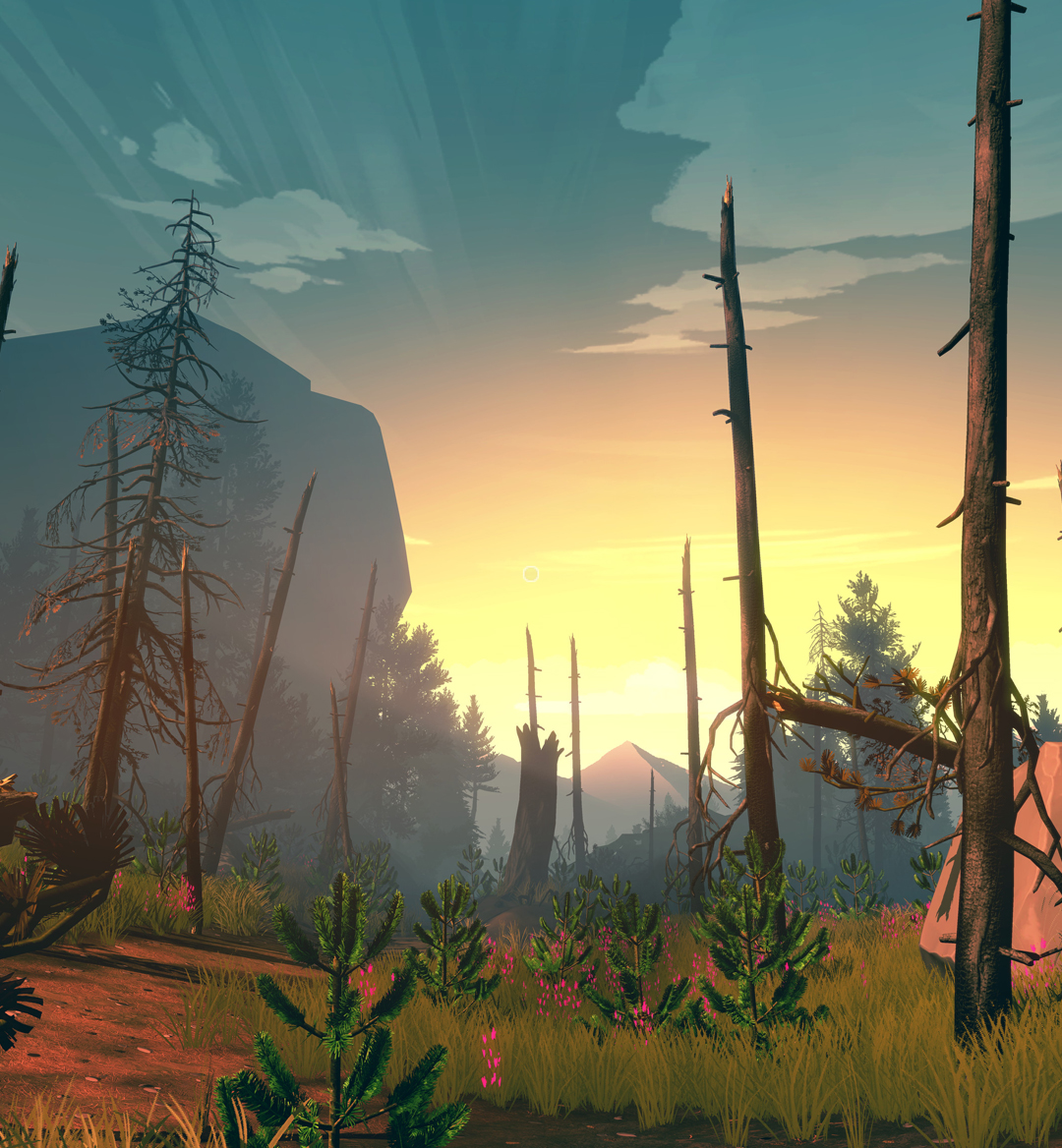 Fans and critics alike responded to it in kind thanks to its strong narrative, likable characters, realistic dialogue, and unique art style. For those of you who got to the bottom of the mystery at the heart of Henry’s strange tenure as a fire lookout at Shoshone National Forest, you’re most likely on the lookout for games that are similar to what Firewatch has to offer.

There are 15 games in particular that offer the same type of fulfilling and emotionally affecting experience that Firewatch provides. These titles offer a mix of all the elements Camp Santo’s classic thrives by or just a few of them to a satisfying degree. If you’re desperate for another adventure game that knows how to tug at the heartstrings, offers a compelling narrative, and deals with earnest or melancholy themes, then you should seek out the games listed below.

Gone Home incorporates all of the themes Firewatch lives by – it plays from a first-person perspective, is all about adventuring within a mysterious location, and has an enticing mystery as its central storyline hook. The house you explore within this title exposes you to the struggle of a family and the outcome of a heartwarming love story. Plus it takes place in the golden era of the ‘90s, so there are a lot of thematic nuances to appreciate as you venture through Gone Home.

2. ‘What Remains of Edith Finch’

Edith Finch is on a quest to find out why she’s the last remaining living member of her family. And to do that, she travels back to her main family household and lives out the final day of several members of the Finch Clan. The gameplay sequences and story setups for each flashback moment is enticing as it pulls you into the Finch family’s unfortunate string of bad luck. What Remains of Edith Finch is bound to make you feel a wealth of emotions as you get to the bottom of its intriguing tale.

3. ‘The Vanishing of Ethan Carter’

This next pick on our list adopts a horror theme that’s effective in its delivery of revelations about the plot being told throughout it. The Vanishing of Ethan Carter follows an occult-minded detective who’s hot on the trail of a boy named Ethan Carter. After receiving a letter from him that clearly reads like a cry for help, you step into the detective’s shoes and attempt to find out why Ethan’s disappeared. As you make your way through Red Creek Valley, you’ll come across a string of criminal investigations and use your ability to talk to the dead to piece together the tragic tale behind Ethan Carter’s fate.

The fear of being alone in a frigid environment is replicated perfectly within Hinterland Studio Inc.’s The Long Dark. You’ll need to get familiar with the game’s snow-filled locale as you hope to survive Mother Nature’s most dangerous hazards after surviving a plane crash. The Long Dark gives you the option to make your way through it via a structured story mode or an equally enthralling survival mode that allows for a freer from approach to progression. Navigating a digital version of the Northern Canadian wilderness is a challenge, but thankfully it’s an enjoyable one.

If you’re in the market for a science-fiction take on Firewatch’s gameplay formula, then Tacoma should be right up your alley. The abandoned space station you’ll explore within this first-person adventure was once home to a crew that lived and worked together. You’ll need to rely on the station’s digital surveillance system to watch 3D recordings of the crew and wrap your head around the events that led to their disappearance. Tacoma comes from the brilliant minds behind Gone Home, so you know it’s definitely worth a look.

6. ‘Everybody’s Gone to the Rapture’

Navigating the once-bustling town of Yaughton Valley, Shropshire is what makes up the majority of your time spent with Everybody’s Gone to Rapture.  The detailed open-world within this title offers up a mystery that you’ll surely go to great lengths to solve. Investigating the final days of the denizens of Yaughton Valley means you’ll be putting all the puzzle pieces together that push you ever so closer to the apocalypse that impacted their lives. Everybody’s Gone to Rapture’s mysterious nature will pull you in for the long haul.

What was once a free-to-play Source game engine modded experience has now become full-fledged remake that everyone should seek out. Dear Esther places you on a desolate island located in Hebrides, Scotland, which is where you’ll traverse all the while as you try to figure out the cause of death behind a troubled man’s deceased wife. As you reach new areas on the island, different letters come into your possession and are played out via audio fragments that open up more of the game’s intriguing narrative. Those pieces of audio are randomly generated during each playthrough, which helps Dear Esther give players more of a reason to return to its vast island.

Just like The Long Dark, Kona’s gameplay loop takes place within a cold environment that tests the main character’s survival skills. That character is a private detective named Carl Faubert, who becomes trapped up in Northern Canada. While enduring the hazardous blizzard attacking Atamipek Lake, you’ll control Carl as you look into the mysterious events that disturbed the small town. That mission is a tough one since the hazardous weather and other elements of nature itself can be overwhelming. Kona’s surreal world and gripping tale are worth diving into.

Homesick places you in an abandoned building that’s full of puzzles to solve, clues to gather, and plenty of hallways to traverse. In the daytime, you’ll handle most of those aforementioned activities with ease. But once you close your eyes and enter a traumatic dream state, Homesick gets a lot tenser as you look to escape the looming darkness that chases you relentlessly. While this game may just take place within a single building, you’ll also get to explore the dark corners of your mind and come ever so closer to escaping your nightmares.

Ether One delivers its adventure via two methods that appeal to two types of gamers – one path that’s all about throwing complex puzzles at players to wrap their heads around and another path that’s free of those same puzzles. That second approach to exploring Ether One’s world is perfect for those who want to walk around the town of Pinwheel without having to trouble themselves with brainteasers. But for those of you who want a bit of an extra challenge, the first gameplay style is quite inviting and harkens back to the glory days of puzzle-filled adventure games such as Myst.

Finding oneself within the confines of a vast cave can be quite the fear-inducing endeavor. Scanner Sombre puts you in the role of someone who’s forced to deal with that exact scenario. What makes your on-foot adventure through the massive cave system in this game is the unique way in which it appears to you. The LIDAR scanner and helmet you don presents you with a stunning colorful outlook on your cave exploration trial, which makes Scanner Sombre one of the more visually striking picks on this list.

There sure are a lot of so-called “walking simulators” that take place within an extremely cold environment. The Fidelio Incident is another one of those types of games and since it’s on this list, it’s definitely worth a recommendation. The dangerous trek you’ll embark upon in this game takes place off the coast of Iceland. After surviving a plane crash, you take control of a man named Stanley who’s on the lookout for his wife Leonore. During that same quest, you’ll need to help Stanley cover up his and his wife’s problematic past before their rescuers arrive.

INFRA’s main gameplay mechanic relies on your use of an in-game camera. As a structural engineer tasked with inspecting damaged infrastructure, you’ll need to take photos of those harmful areas and solve a slew of puzzles along the way. Your work will expose you to the origins behind Stalburg and its people, plus you’ll slowly uncover a major conspiracy that goes hand in hand with the city’s structural issues. INFRA’s premise starts out simple enough, but it quickly grows in complexity and keeps you enthralled the more you delve into it.

Oxenfree’s supernatural theme is the main hook that will bring you in. But thanks to the game’s strong narrative about a boy named Alex and his time spent with his stepbrother Jonas on a military island, you’ll stay along for the full ride this game has to offer. The presence of ghosts comes into play at some point during your time spent in Oxenfree. Your conversational choices with friends/spirits and discoveries of the island itself go a long way towards how you’ll deal with your ghostly troubles. Oxenfree’s wealth of mysteries to solve and interesting plot threads will push you to get to the bottom of it all.

Inspired by another classic puzzle-filled adventure game known as Myst, The Witness pushes its players to traverse a mysterious island and regain their memories along the way. Accomplishing that goal means you’ll need to walk in every direction possible and complete a collection of grid-based puzzles that lead to surprising results. Each puzzle adds a new wrinkle to the mix and keeps things fresh during your lengthy stay on The Witness’ mysterious island. Oh and if you need even more of a reason to check this game out, here you go – its lead designer is Jonathan Blow, who’s also responsible for producing another classic game called Braid.