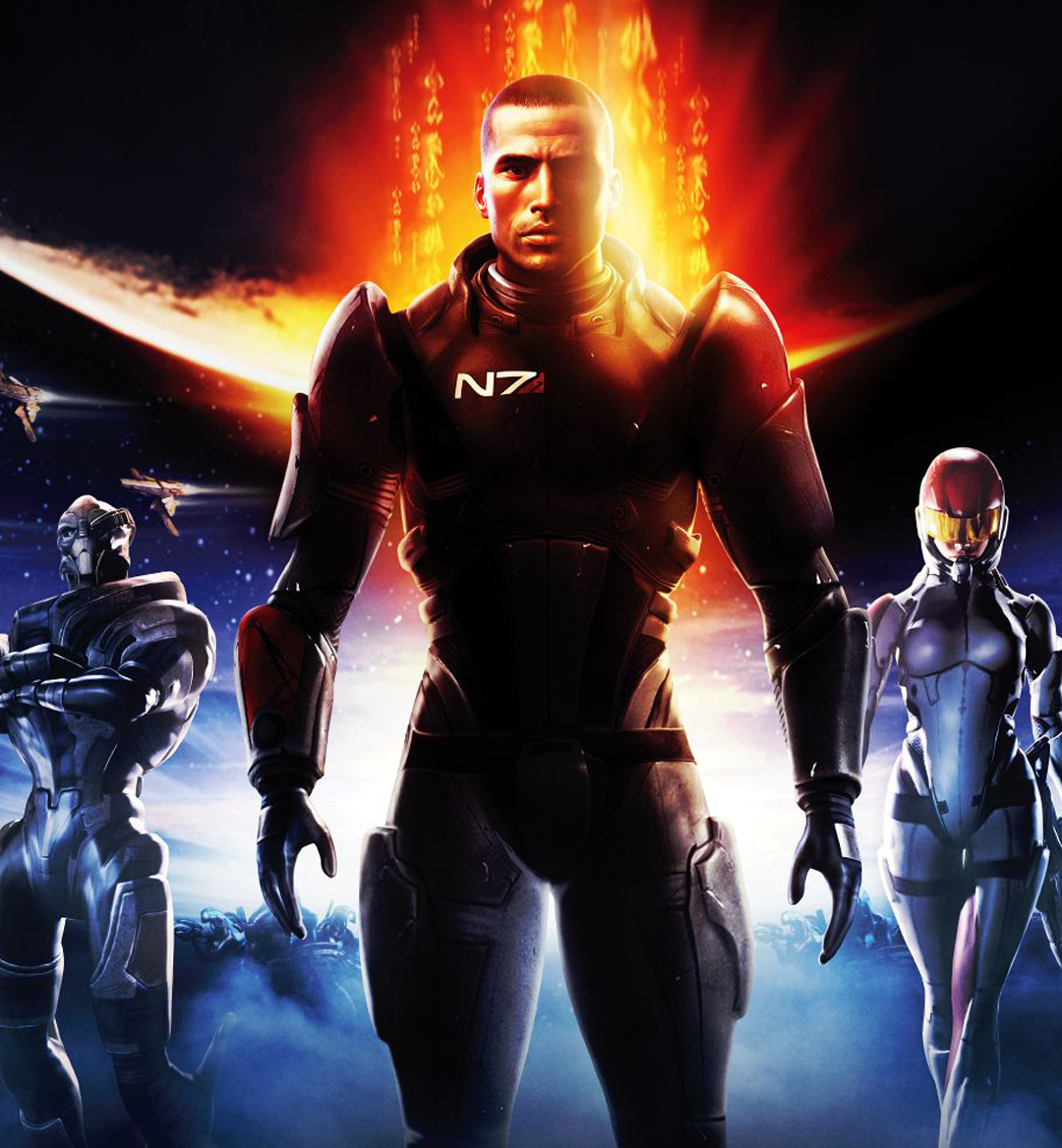 Mass Effect’s popularity goes beyond your typical popular video game. Yes, other games may have garnered legions of fans but Mass Effect fans are particularly passionate. Look no further than the controversy surrounding the original ending of the original trilogy. Despite being a perfectly serviceable ending, it wasn’t as perfect as fans expected and they made sure the studio knew it.

Mass Effect inspires this level of fanaticism because it’s frankly a good game. It tells an epic story and is a pioneer with modern action RPG gameplay. While few games can copy the magic behind Mass Effect, there is only a handful that can strike similar chords.

To say Anthem had a lot going for it is a massive understatement. First introduced in 2017 during E3, the demo that Bioware put out impressed everyone within the gaming industry, from the executives to the players. That trailer led to record highs of anticipation, overshadowed by just one other game on this list. In many ways, Anthem took on the same pre-release trajectory as Mass Effect, but, unlike Mass Effect, Anthem could not deliver on the hype it had garnered.

The game suffered from bugs and the end product was not what players had imagined. The game trudged on for some time and, in some ways, improved but it was never able to recapture the goodwill among players it started with, which is a shame. Anthem, much like Mass Effect, is one of the few examples of a unique IP that tells a compelling science fiction story. There is no telling where Anthem would have lead players if they had only stuck around.

Mass Effect’s big brother. Knights of the Old Republic, or KOTOR for short, is, in many ways, Mass Effect’s blueprint, although die-hard KOTOR fans would bristle hearing that description. They would likely argue that KOTOR can stand on its own merits, and they wouldn’t be wrong. Released in 2003, KOTOR gave Star Wars fans what they wanted at the time, a prequel story depicting the Sith at the height of their power. What they got was a game that pushed people’s expectations of the way a game can tell a story. Everything from the story progression to how it treats decisions made by players was novel, and the ultimate benefactor to all that was Mass Effect.

Remember Anthem’s pre-release hype I spoke about? It was eclipsed by Cyberpunk 2077. The darling of developers at CD Project Red, Cyberpunk was expected to supplant The Witcher III as the studio’s top game. Immediately following its release in 2020, however, it became apparent the game could have benefitted from a little more polish.

The game was buggy, distractingly so, which is a shame because outside of the bugs, Cyberpunk told a decent story while managing to stay true to its Cyberpunk roots. Luckily, the developers have ironed out many of the wrinkles.

What Mass Effect did for science fiction, the Dragon Age series did for fantasy. Both games were produced by Bioware and, in many ways, it shows. While Dragon Age doesn’t have spaceships like its sibling title, many of the elements that characterize Mass Effect are also part of Dragon Age’s DNA. Everything from the player's decisions affecting the later story to the dialogue menu to the romance options.

A looter shooter that sets the standard for future games to come. With an aesthetic and gameplay similar to Mass Effect, it’s little wonder so many Mass Effect's fans have flocked to this game series. Destiny is a looter-shooter put out by legendary studio Bungie, the folks behind the original Halo trilogy.

When Bungie announced it was working on a new IP that was a science fiction shooter, many thought they were in store for another Halo. Destiny, however, proved to be a different thing entirely, thanks to the rich world, or worlds, that make up the game. That, coupled with the fact Destiny is one of the few successful looter-shooters on the market, makes Destiny one of the few games that can go toe-to-toe with Mass Effect.

Perhaps the only game on this list with a following larger than Mass Effect. First released in 2001, Halo Combat Evolved was a sleeper hit with gamers flocking to the title. Like Mass Effect, Halo tells an epic science fiction story that spans several titles. The thought and attention to detail make both games beloved amongst their respective fans, of which there is significant overlap.

Critics and fans alike have called the games that make up the Deus Ex series a masterpiece. Originally released in 2000, Deus Ex is one of the oldest franchises on this list. As such many of the gameplay elements that you see in Deus Ex would later be seen in other titles, such as Mass Effect. While the graphics of the original title hasn’t aged as well as the original Mass Effect, later titles like Mankind Divided push the graphical boundaries of video game performance. While the story itself may not be as high-stakes as Mass Effect's intergalactic war, it is compelling enough to keep players interested.

Some might wonder what this title is doing on this list. After all the story behind Vampire the Masquerade Bloodlines series is about as far as one can get from the Mass Effect series. The gameplay, however, has echoes of Mass Effect within it. Released in 2004 by Troika Games, Bloodlines is best described as an action RPG title. That means while the gameplay is your typical action, adventure fare, there is an element of strategy and progression that adds a measure of depth to the title. In that regard, Vampire the Masquerade Bloodlines shares at least a few elements with Mass Effect.

Few games age as gracefully as the original Mass Effect. Alpha Protocol is one of the few titles that still holds up more than a decade after its original release. Developed by Obsidian, Alpha Protocol is an action RPG that puts you in the role of a super spy trying to save the world from evil forces. What it may lack in aliens and galaxy-spanning wars, it more than makes up for in cloak-and-dagger and intrigue. Alpha Protocol is well worth a look by Mass Effect fans.

Prey is another surprise hit from the folks at Arkane Studios. Released in 2017, Prey combines above-average visuals with standard first-person shooter gameplay to tell a science fiction story about a man trying to survive on a space station. You can’t really tell that from the game’s first hour or so, which appears to take place in a large metropolitan area. The aliens you find yourself going up against are a bit uninspired, design-wise, and combat does tend to get a bit tedious after the first few encounters. If fans are willing to overlook that, there is no reason why Prey shouldn’t be added to their backlogs.

Another heavy hitter, the Fallout series is one of the most beloved franchises among gamers. Its fourth installment polishes away the rough edges of the previous games. Its premise is survival in a post-apocalyptic world. The game expertly mixes comedy in its gameplay to give players a memorable experience.

CD Projekt Red released this game back in 2015 anticipating a massive hit. The same couldn’t be said for the gaming industry, who for the most part, were taken by surprise when the game hit markets. That’s largely because the previous two games were moderately successful but didn’t quite rise to the heights of the third installment.

The game is an action RPG, like Mass Effect, that is set in a world as brimming with magic as Mass Effect’s world is brimming with technology. In both games, the gruff main character is supported by a colorful cast of characters, each with their own distinguishable personalities.

Bethesda’s last great project, Skyrim, is the 2011 sequel to Oblivion. While the game may not have a rogues gallery of interesting characters like Mass Effect, it does have an involved RPG element. As characters play the game, they enhance certain skills the more they use them. Sneaking in a dungeon, for example, is the best way to level up your sneaking ability, while lockpicking and swordplay are enhanced the more you practice them.

A game that has been in beta for a number of years, only to be released in 2020 to more plaudits than they can count. Hades hit the lottery as far as indie game success is concerned. The premise is simple. You play as the prince of the underworld who is trying to escape from Hades, both the place and the god.

To do so, you have to mix and match a seemingly infinite number of skills bestowed on you from various gods throughout Greek mythology. The leveling system, if you can even call it that, is complex and requires a bit of strategy on the player’s part. This game places as much of an emphasis on the RPG aspect as it does the frenzied combat, which makes it a kindred spirit with Mass Effect.

The Outer Worlds is another game that blends comedy with action in a vein similar to Fallout, but The Outer Worlds does it so much better. Released in 2019 by Obsidian Entertainment the game boasts a setting that is simultaneously alien and familiar.

The gameplay is snappy, with only a few hiccups here and there. The characters you run into, including the ones you can eventually partner with, are funny and memorable. All around, The Outer Worlds is an interesting game most Mass Effect fans would love to sink their teeth into.