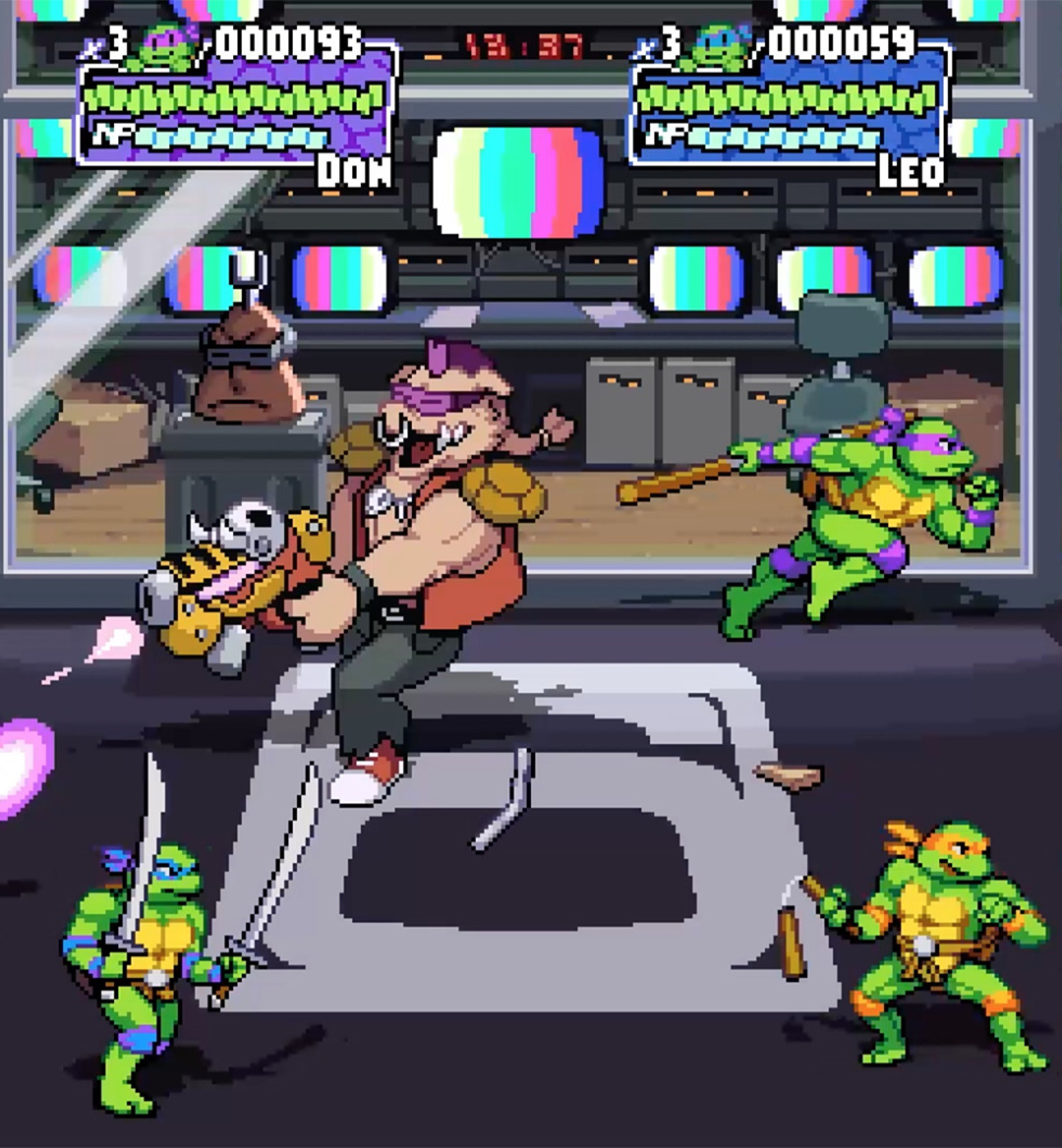 Leonardo, Donatello, Michelangelo, and Raphael are collectively known as the crimefighting "Turtles in a Half Shell," the Teenage Mutant Ninja Turtles. And since they came upon the scene, the 80s/90s pop culture icons have enjoyed immense success within the gaming genre of beat 'em ups. The original arcade brawler, TMNT: Turtles in Time, and TMNT: The Hyperstone Heist are all remembered fondly and still played to this day thanks to a combination of cartoon-like graphics, an energetic soundtrack, and easy-to-understand combat mechanics. Now it's time to add another game to that list of playable TMNT gems. Here's my glowing Teenage Mutant Ninja Turtles: Shredder's Revenge review. 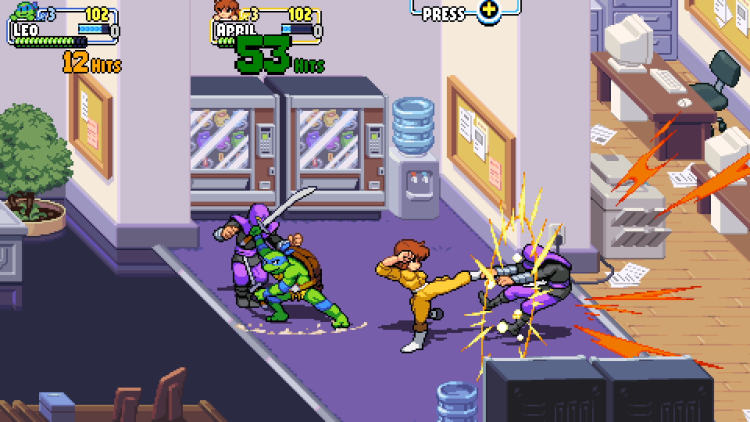 It's easy to see why the development studios known as Tribute Games and Dotemu were tapped to create this wonderful ode to the Turtles and their arcade roots. Both studios have provided modern-day classics that are either inspired by games of the 90s golden era or completely new entries in franchises that have been dormant for way too long (Mercenary Kings, Streets of Rage 4, and WindJammers 2 immediately come to mind). With all that in mind, both developers put their expertise in the beat 'em up genre to great use here.

At first glance, you'd be forgiven for mistaking Shredder's Revenge as a retro TMNT game you thought you mistakenly missed out on. And that statement should come as a complement to the artists that worked on it all - the 80s cartoon aesthetics shine brightly within every aspect of its package. The menus, the selectable characters, the many foes you'll face, the surprising character cameos, and the stages themselves all stick close to what old-school TMNT fans wax nostalgia over. Every animation looks crisp in motion as well, which gives Shredder's Revenge a massive step up in comparison to past TMNT beat 'em up experiences. 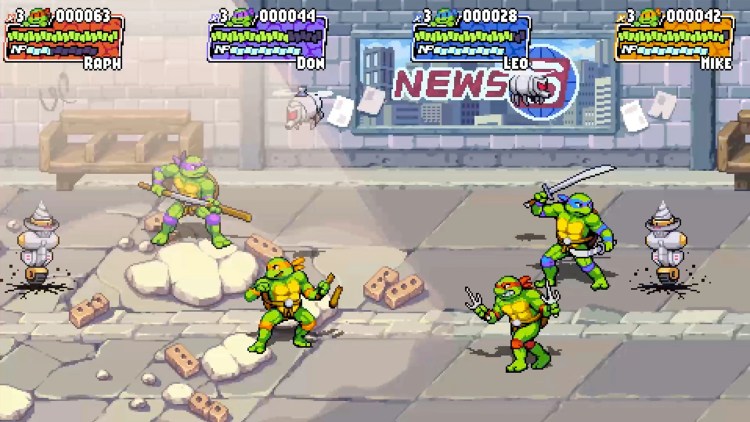 To my surprise, every character can tap into a large list of moves that grows over time. At first, you can deliver basic combos, diving/flying attacks, dashing maneuvers, super moves, and grabs. But as you make your way through the game's Story Mode, your chosen hero will unlock new abilities that widen their depository. It feels awesome when you start eliminating the Foot Clan and their many allies with flying super attacks and go into "Radical Mode" to become even more dominant on the battlefield. The moment-to-moment action in this game never grows stale due to the varied movesets each character utilizes and the random items/traps that let you take out your enemies in a more clever (and hilarious!) manner. Shredder's Revenge's replay value is lifted to a high degree since you'll feel compelled to level up every character and do so while your local/online buddies are also in tow.

The main Story mode is awesome since it feels like you're playing through an entire season of the old 80s animated series. Each stage is themed after a specific big boss - longtime fans will get a ton of amusement at the sight of some familiar faces and deep character cuts that have been lovingly recreated in video game form. There's even a bunch of cool easter eggs and cameos that point to how dedicated the game's devs are when it comes to honoring the long legacy of the Turtles. Completionists will also get plenty of mileage out of Shredder's Revenge as each stage houses hidden collectibles and challenges them to complete three sub-tasks along with beating the level at hand. Getting to do all that with five other players makes all the onscreen pandemonium even more of a good time to bask in. 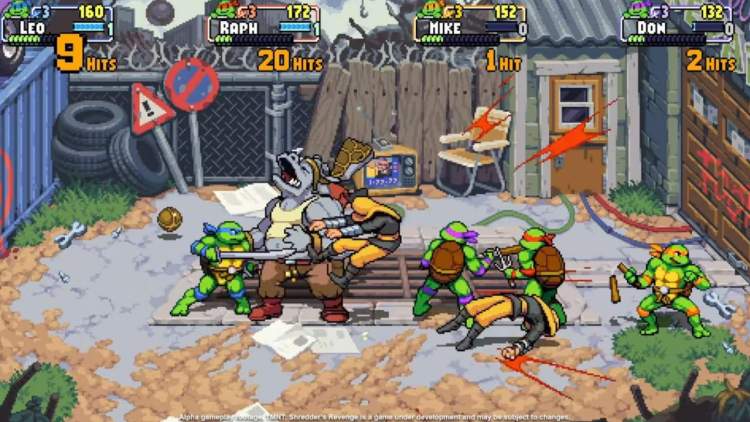 Besides the main Story campaign, you can also make an attempt at beating the comfortably lengthy collection of stages this game contains via Arcade mode. With a limited number of lives, this experience feels just as tough as the games that required you to keep inputting quarters to stay in the fight. Thankfully, it's a rewarding endeavor worth taking since it feels so rewarding to make an attempt with your friends by your side. Being able to revive your fallen buds and high-five them to lend them some energy points gives you more of a fighting chance during every stage playthrough. And pulling off team combos and devastating grabs all the while is simply a blast.

All in all, this retro-stylized beat 'em up has taken the throne as the greatest TMNT beat 'em up I've ever played (and this is coming from a guy that adores Turtles in Time!). The crisp animated visuals, incredibly catchy tunes (with some that even include rocking vocals!), and addictive gameplay kept me entertained from start to finish during my city/planetwide journey. While I was irked by annoying attacks from some enemies at times, that minor setback isn't enough to keep me from returning to kick some more shell. This TMNT: Shredder's Revenge review should put all your fears (if any!) about this beat 'em up to rest - you should definitely spend some time beating up the Foot Clan with your most trustworthy couch/online co-op brethren.

‘Dawn of the Monsters’ Review