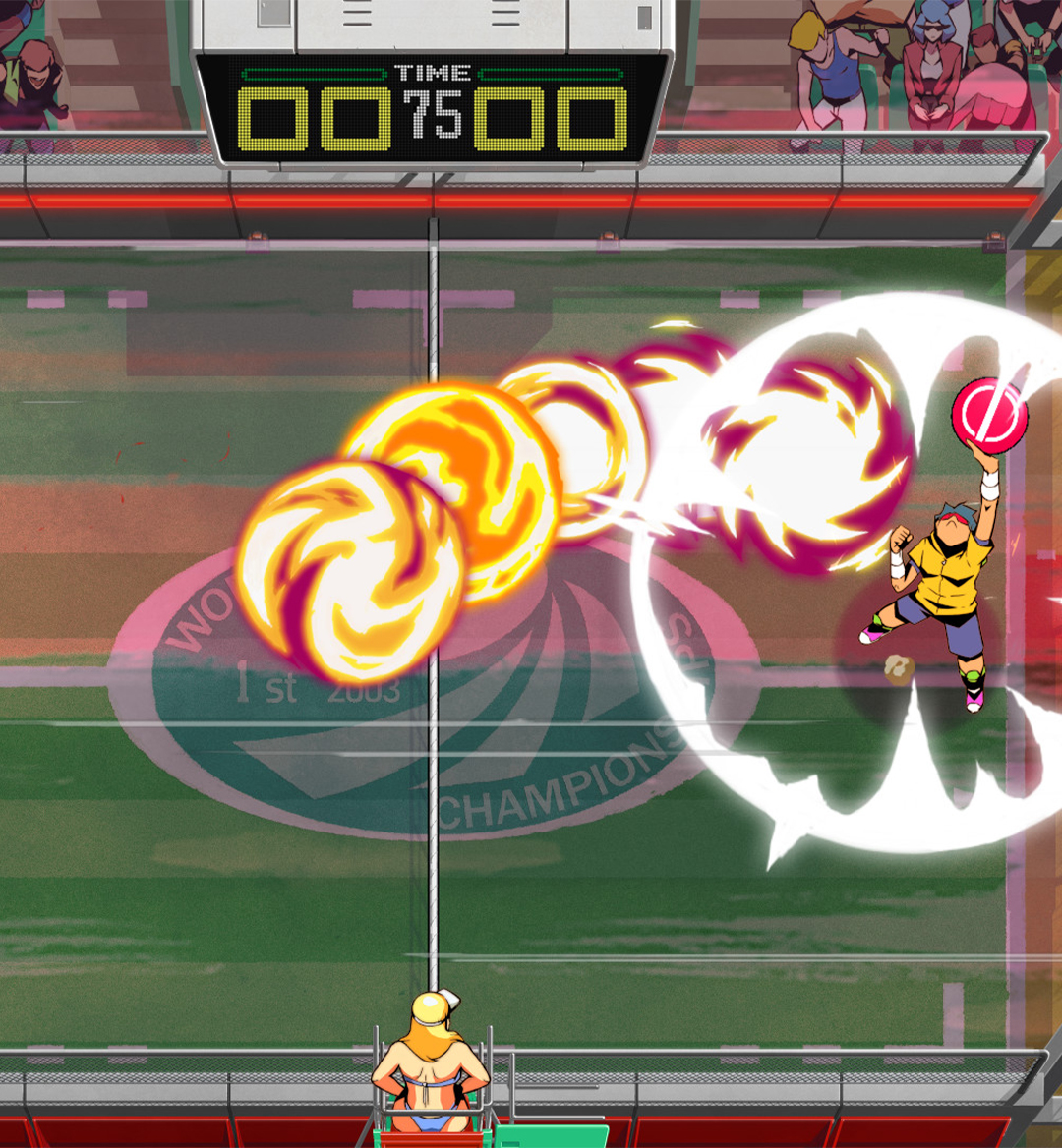 It's always nice to get surprised by the rerelease of a slept-on arcade gem.

Back in 1994, SNK gave its thriving Neo Geo MVS arcade platform a surprisingly addictive air hockey game developed by Data East. That game was Windjammers, an incredibly fast-paced take on the classic Pong formula that features lite-bright visuals and super charismatic athletes. Much, much later in 2018, publisher/developer Dotemu got the rights to Data East's forgotten gem and ported it over to PS4, Nintendo Switch, and PS Vita. And then the unthinkable happened - a hardcore group of masterful Windjammers players took to the game in droves and showed just how hype it truly is during the 2018 installment of the famous Evo fighting game tournament. With so much positive attention paid to Windjammers, it seemed like a sequel would come later down the pipeline.

Thankfully, that prediction came to life in the form of a supremely upgraded rendition of the retro air hockey gameplay that got a resurgence in 2018. And thanks to Dotemu's talented development team, we now have that brand new series entry in the form of Windjammers 2.

As soon as you get a good look at this newly refined foray into the wonderful world of Windjammers, you'll instantly be floored by its gorgeous animated visuals. Major props go out to the art design team for doing a bang-up job with this sequel - the pixelated appearance of the original has been left behind in favor of wonderfully hand-drawn animations that fully realize the character concepts of past roster members, introduces new ones, and brings every other aspect of the game to life in the most visually appealing way possible. The graphics pop off the screen due to the flashy colors implemented throughout everything from the main menu right on up to the intense matches themselves.

The spirit of the original Windjammers is retained in full here thanks to several aspects. And one of them is the exciting original soundtrack that plays out during nail-bitingly intense bouts. For those of you who've poured hours into the first game, you'll surely be pleased once the opening notes of the original theme song come over your speakers. The rest of the tracks that emanate from this arcadey sports experience are infinitely catchy and perfectly match the energetic mood put forth by it.

The main source of gameplay you'll derive from Windjammers 2 comes from its offline arcade mode and online suite. In the case of the arcade mode, it offers a lively romp around a city that plays host to the Windjammers Championship tournament. Players get the chance to choose their opponents and play through random minigames as they fight their way to the very top spot. There's a ton of fun to be had here as you contend with intelligent AI opponents that certainly don't make it easy for you to defeat them. Speaking of difficulty, that aspect of Windjammers 2 might prove to be too exhausting for some. Even on the easiest difficulty level, the computer-controlled foes you'll run into will still be far from a cakewalk and cause you to drop everything at a moment's notice. Windjammer's 2 complex gameplay systems are fun to get a grip on over time, but you'll definitely find yourself raging from time to time during your early sessions against the AI.

Windjammers 2's core gameplay concept starts out simple enough - you fling a power disc back and forth in order to land it in different parts of your rival's goal in order to score at different point intervals. But as you begin to wrap your head around each character's stats and the universal moveset afforded to the entire roster, things get even crazier. That portion of the game is why maneuvering through it all is part of its high fun factor - getting in tune with all the different moves you can pull off and learning the layouts of each stage will make you feel like you're ready to take on the world. The newly added jump button goes hand in hand with the large array of trick shots you can pull off, which makes Windjammers 2 matches feel even more spirited and rewarding over its predecessors.

Windjammers 2 is far from a walk in the park - its complex mechanics can prove to be a bit too much for some and the AI opponents you'll run into will have you struggling with an Arcade Mode playthrough for much longer than you'd expect. But for those that stick with it and learn the ins & outs of everything this sequel has to offer, you'll be highly rewarded for your time investment. The thrill of landing a successful Power Toss in the five-point section of your rival's goal is simply unmatched. And getting to do that against a human player online is infinitely gratifying. Windjammers 2's learning curve may be high, but the same can also be said for its fun factor. Shout out to Dotemu for reviving this forgotten arcade IP and giving it the proper refinement it so richly deserved.