Randy Savvy is the King of Street Country—and Eventually Everything Else, Too 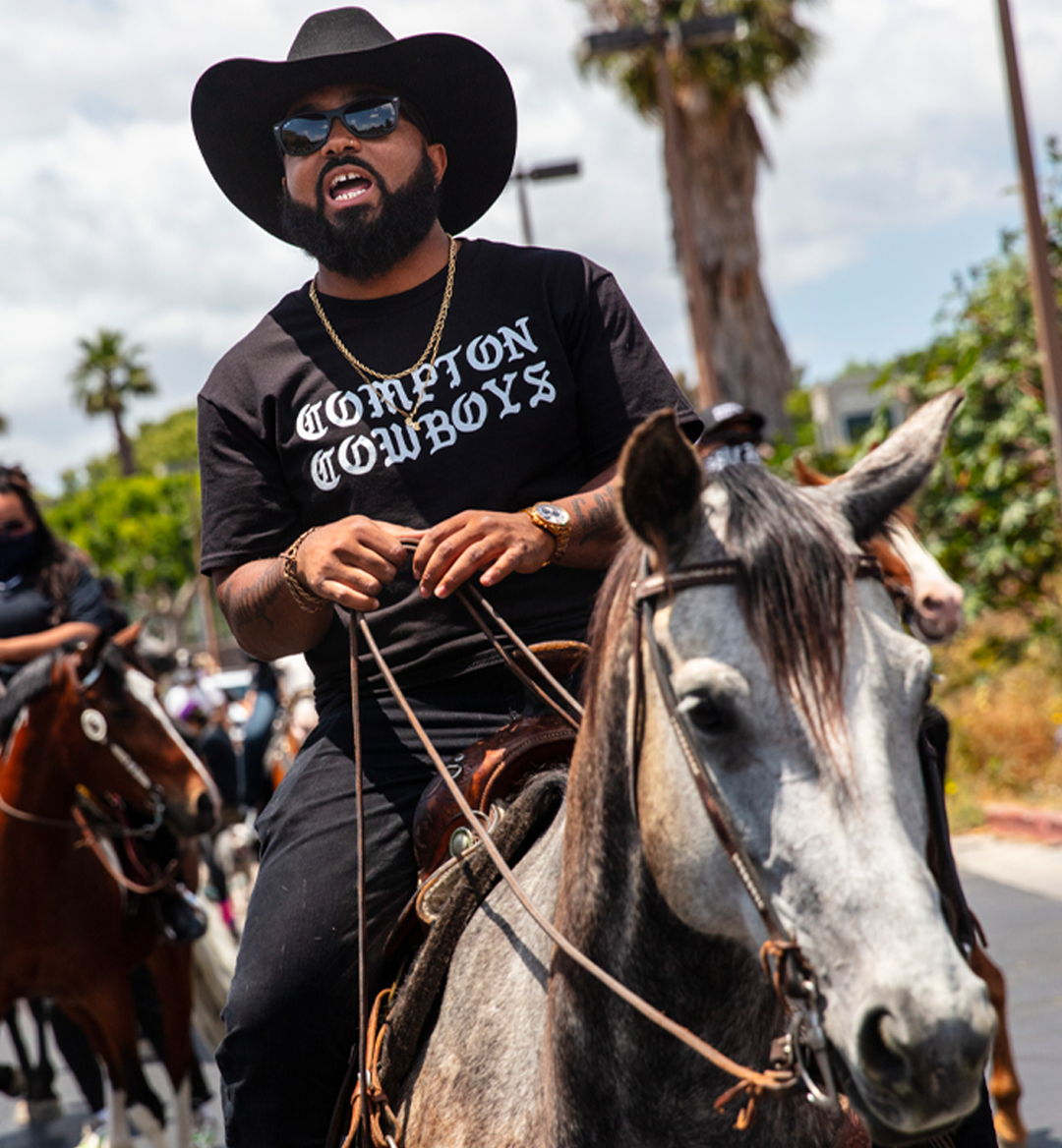 Everything is everything now. The internet has at once strengthened and demolished the monoculture; we’re all on TikTok, even if we’re all on different TikToks. Traditional mores and shibboleths have been replaced by vibes—nothing has a formal definition, but you know it when you see it. This is how country music is Sam Hunt but also Chris Stapleton but also Sturgill Simpson but also Kacey Musgraves.

And this is how Randy Savvy and his signature “street country” sound are poised to become the next big thing.

Born and raised in Los Angeles, Savvy comes from a long line of equestrians; his family has owned Richland Farms in Compton for upwards of five decades. In fact, Savvy learned to ride as part of the Compton Junior Posse, a gang-prevention program founded by his aunt Mayisha Akbar that’s since evolved into Savvy’s own organization, the Compton Cowboys.

As the founder and leader of the Compton Cowboys, Randy Savvy (born Randall Hooks) wears many hats, mainly of the ten-gallon variety. But beyond his philanthropy or music or film career, the most important thing to know about Savvy is that he’s a cowboy, for real; his every drum beat or twang is informed by his unique background and experience.

Last week, Savvy sat down with ONE37pm to talk about his burgeoning music career, cowboy bonafides and quest to become the P Diddy of the Wild West.

Where did “street country” come from?

Randy Savvy: "It came together in 2017, around the time I conceptualized Company Cowboys. Before that, I’d been doing pop hip-hop for about 10 years, and just mostly focused on like top 40 kind of stuff. Once I started working on the Compton Cowboys, though, the whole thing just kind of came to me like a whirlwind. My mom was retiring from the ranch and she was either going to pass it down to me or shut it down. At that same time, I was producing commercials and videos and I got a job for a commercial that was looking to have Black cowboys in it.

So the next time I went to the studio, I was in cowboy mode, and decided that I might as well make a cowboy song. Almost immediately, I could feel that I’d made something unique and I was trying to coalesce some energy around it and show people that this could be the future—everybody was rocking with it, but they kept telling me that there was no market for it.

And as I was running around trying to convince people about my vision, Lil Nas X blew up with Old Town Road. At first, I was heartbroken because I felt like I missed my shot. But at the same time, it was really inspiring because I realized that I was really onto something with street country. There was an appetite for this sound and I knew nobody could more accurately represent it than I could."

Why are you so well-suited to accurately represent it?

Randy Savvy: "It's just my truth—that's my reality. I'm an actual cowboy born and raised on a farm in Compton. I manage more than 25 horses. In fact, I'm actually on my way to one of my barns right now. It's not like I'm just wearing a hat and boots and playing with my voice. The people now who are trying to blend hip hop and country are just experimenting with sounds—they're not actually from both cultures the way that I am.

So Street Country is that authentic shit; you're gonna hear the trap drums, the 808, the high hats, and those real patterns that's coming from the streets because it’s coming from my producers, my homies from the streets. But then you got those guitars coming through a steel pedal and you got the melodies and the topline songwriting that is really from classic country music; there’s nothing else like that stuff."

Who are your musical inspirations?

Randy Savvy: "Country music has always been in my heart. I grew up listening to that shit at the rodeo—Alan Jackson is a regular staple in my playlist; “I Hope You Dance” by Leanne Womack was the first and only song that’s ever made me cry. There’s just a profoundness and beauty to country music and that’s what really made me fall in love with it.  And then at the same time, my dad was an avid west coast hip hop dude. He’d play Tupac, NWA, Westside Connection, Too $hort, all of that gangsta rap from that time, so that was my life too."

How did the Dr. Dre collaboration come together?

Randy Savvy: "During COVID, it was a struggle financially. I was worried about feeding the horses. The Compton community is very tight-knit and will always want to support anything that is positive and beautiful coming out of the city, so I knew that there were people I could reach out to for help. I ended up just calling the mayor of Compton (Aja Brown, at the time) to tell her we were hurting a little bit because I knew if Dre heard about us and knew what we were doing, he’d want to help us out; to me, our movement is essentially NWA on horses.

A few days later, I got a call from an unknown number and I had a feeling that I had to pick it up. It was Dre! We hit it off instantly and he donated a year’s worth of funding to feed the horses."

When did you get in the studio with him?

Randy Savvy: "I was actually a little reluctant to tell him about my music at first—I feel like everybody must be bothering him with their music all the time. But as we were talking, he asked me what else I had going on; I mentioned that I do some TV work and make music and he lit up. To this day, Dre is mad passionate about music— he’s like a kid in a candy store in the studio. I played him some of my tracks and he picked out Colorblind as his favorite and said that if I wanted, he could add some sauce to it. This was like early 2020, so I just put that in my backpocket because I was still in the process of curating my album and stuff.

Flash forward to the George Floyd protests a few months later, Meek Mill dropped “Other Side of America” and a bunch of other artists were putting out great songs talking about real shit. I wanted to be a part of that, so I was combing through my catalog and I realized that Colorblind was perfect. Originally, Colorblind was about gang violence, how I wished I could be colorblind because the red and blue lights of sirens and the yellow crime scene tape and the white chalk on the ground can be so traumatizing. But I realized that in the context of George Floyd, all those concepts still applied, except they could be used as symbols of police brutality rather than gang violence.

Once I realized this, I brought it up to Dre and he fucked with it, so he invited me to his studio. I'm like at Dre’ house and his studio, just me, him and his team. I'm just, blown away, like ‘damn, this is really happening.’ But at the same time, I didn’t feel starstruck or nervous; I felt like that was my moment, that I was meant to be there. He had me cut some more vocals and he added all this production stuff around it and elevated the song to a whole new level."

Between your music, your community work and your tv gigs, you have a lot of balls in the air. Where do you see yourself going from here?

Randy Savvy: "I always tell people that I want to be my generation’s version of of guys like Jay Z, 50 Cent, Dr Dre and P Diddy. Mogul vibes, but with a cowboy hat on."