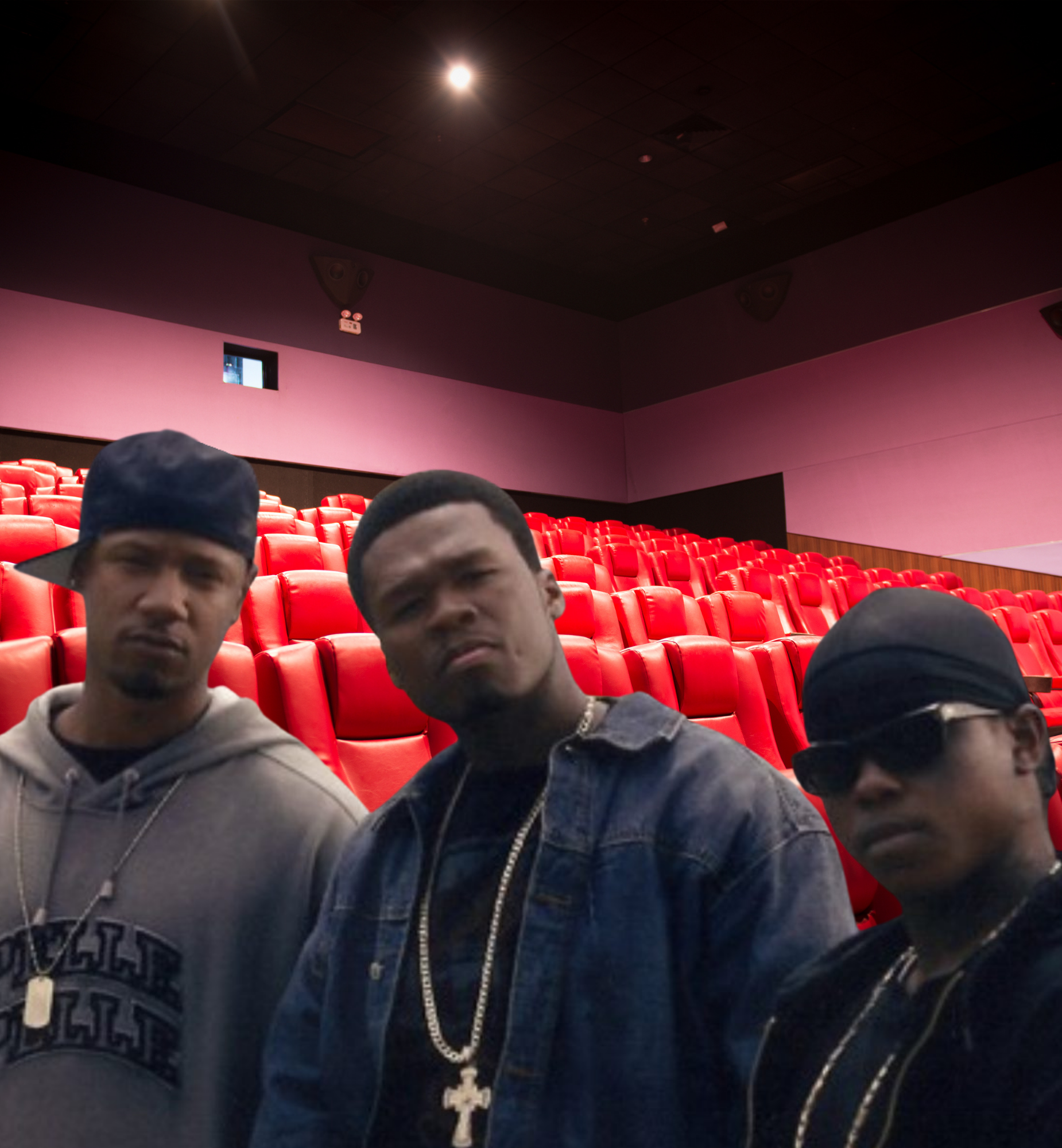 Music goes hand-in-hand with just about every other art form. When it comes to films and music, there's no exception. Some of the best movies have the best soundtracks (and vice versa), and it can be hard to have clarity of which is actually the best. There's so much to choose from, but we thought you'd find it useful to have a guide to some of the best.

In no particular order, here are 15 of the most iconic songs from movie soundtracks.

Eminem grew widely famous even before his film debut in 8 Mile, however when the movie dropped, it cemented what he'd already started. The movie gave us a look at the true grit of the come-up; not the glitz and glam of being a celebrity.

This made Eminem feel like a much more lovable character, far beyond the super-villain vibe his music at the time introduced us to. 8 Mile felt like the process of an anti-hero becoming just a regular hero. So, of course the soundtrack slaps. Some of the music invokes the corresponding visual from the film in the mind of listeners, especially "Lose Yourself."

Let's not forget about how fire the freestyles were either:

One of the most fitting examples of an iconic movie soundtrack song is "Children's Story" by Slick Rick in David Gordon Green's 2011 film, The Sitter. Jonah Hill (in his prime) having to chase after three devious children across NYC as they leave a trail of chaos? Priceless.

"Children's Story" is the song used in the movie's title sequence, and it is so fitting: a song in children's story-form, about shady dealings in New York City. The song is not only fitting in that sense, it's got a similar type of jovial character as the movie does. Look at Slick Rick's alter-ego voice for example: "Me and you, tonight, we're gonna make some ca-ash, robbin' old folks and doin' the da-ash."

Fun fact: you might recognize the sample from Montell Jordan's hit, "This Is How We Do It."

Cradle 2 the Grave is a classic hip-hop film. Just look at some of the cast: DMX, Jet Li, Anthony Anderson, and even Gabrielle Union. This film depicts DMX's character (Anthony Fait) as a jewel thief who's pulling off the heist of his career. He ends up working together with Jet Li's character (Su), a Taiwanese agent, to save his daughter from a kidnapper (Su's former business partner in the film).

As if Jet Li and DMX in a movie together isn't dope enough, DMX's contribution on the soundtrack stamped this film as one to remember.

Here's the scene with "X Gon' Give It To Ya" from the Cradle 2 The Grave soundtrack.

Usually, the most overplayed songs tend to get worse as time goes on; however, Pharrell is anything but usual. His song "Happy" for the Despicable Me 2 soundtrack became a worldwide hit, and still slaps to this day.

We've seen the hype behind the Despicable Me franchise, most recently with Minions: The Rise of Gru. It is like a tsunami of internet-fueled fan support. It drives numbers that we rarely ever see. However, this Pharrell song would be a classic even if it wasn't on the film's soundtrack.

Snoop Dogg and Dr. Dre are like Batman and Batman. Yes, I said it. Neither would be Robin - that's why this level of chemistry in such a talented duo is so rare.

Their song "187" from the Deep Cover soundtrack is everything we love about each of their sounds, merged into one unforgettable record. Equally impressive is the Laurence Fishburne and Clarence Williams III-led cast, and the resulting quality of Deep Cover.

Above The Rim is another classic film backed by classic music. The first of the two songs we've featured from the film in this piece is "Regulate" by Nate Dogg and Warren G.

Nate Dogg and Warren G were two very frequent collaborators; their close relationship arose from both growing up in Long Beach, California (alongside Snoop Dogg).

Fun fact: Duane Martin played basketball at NYU, and went as far as getting signed by the New York Knicks.

Baller Blockin is a film that documents life in the hood of New Orleans from the perspective of the Cash Money Millionaires team at the turn of the millennium. It's got a DIY feel, but has some phenomenal acting that evokes all sorts of emotions.

The soundtrack, as you could probably guess, is some heat. I mean some serious, serious heat. Even Nas and E-40 feature on the project. The song we're highlighting in particular from this masterpiece is "Project Bitch" by Big Tymers, Lil Wayne, and Juvenile. You've gotta hear it for yourself.

Jay-Z has proven to be on another level when it comes to music and pretty much everything else. The 1998 film Streets Is Watching is yet another shining example of this premise.

"Murdergram" is one of the most memorable songs from a star-studded album, which says a lot on its own. Jay-Z enlists DMX and Ja Rule for this hit. The 3 rappers make up Irv Gotti-founded rap group, "Murder Inc."

In addition, you need to check out "In My Lifetime (Remix)" on this album (and the rest of it). You'll thank me later.

50 Cent stamped himself as one of the best rappers of his time, and by releasing his 2005 film Get Rich or Die Tryin', he further lessened his competition.

"Window Shopper" stands out on a project filled with peak-level 50 Cent hits. That's no easy feat for a song. The album features some very notable acts, including Mobb Deep, Lloyd Banks, and Nate Dogg.

Another noteworthy track from the Above The Rim is The Lady of Rage and Snoop Dogg's "Afro Puffs."

The Lady of Rage takes the main role, on a song with Snoop, nonetheless. "Afro Puffs" is such a clear demonstration of her ability, and it goes down as one of the movie's top songs.

Backstage is an intimate look into Jay-Z's 1999 Hard Knock Life Tour, and (obviously) comes with an insane album.

Like we mentioned earlier, Jay-Z doesn't miss; he's never played when it comes to quality. "Best of Me, Part 2" is one of the soundtrack's standouts, which has earned it the #11 spot on this list.

Bad Boys is a legendary movie franchise which made a habit of enlisting some of the most exciting artists (and thus, music). Bad Boys II managed to continue this trend seamlessly.

The soundtrack of Martin Lawrence and Will Smith-led Bad Boys II features top-tier talent like Pharrell, Fat Joe, Lenny Kravitz, Justin Timberlake, and many more. One of the soundtrack's best is "Shake Ya Tailfeather" by Nelly, Diddy, and Murphy Lee.

The 2018 film Black Panther: Wakanda Forever went down in history for many reasons. The soundtrack only furthered the film's already-impressive level of influence.

"All The Stars" by Kendrick Lamar and SZA is a clear reminder of why we love the film, and why we love Kendrick and SZA so much. It's really some of their best, and is fueled with purposeful energy. The rest of the album is well-worth your attention as well.

Moulin Rouge! is a music-focused film in many ways: the plot is about music, and the album emits a major amount of credibility.

One of our favorite songs from this unfailing album is "Lady Marmalade" by Christina Aguilera, Mya, Lil' Kim, and P!nk. It's a very tasteful blend of genre that you're sure to enjoy.

Last (but not least) on our list is Aaliyah's "Try Again" from the 2000 film Romeo Must Die.

This song is an ear-worm, and fits perfectly into the plot and aesthetic of the film. It's a great example of just how complementary music can be in a movie. Be sure to check this (and the rest of the list) out for yourself.

That's all for today's list. We took a journey through some of the most influential movies and soundtracks of recent history, and highlighted some of the most legendary music out there. You've got plenty to check out, and even more rabbit holes to dive down with each mention on our list.

We made a playlist for this list as well. Take a listen and follow ONE37pm on Spotify!