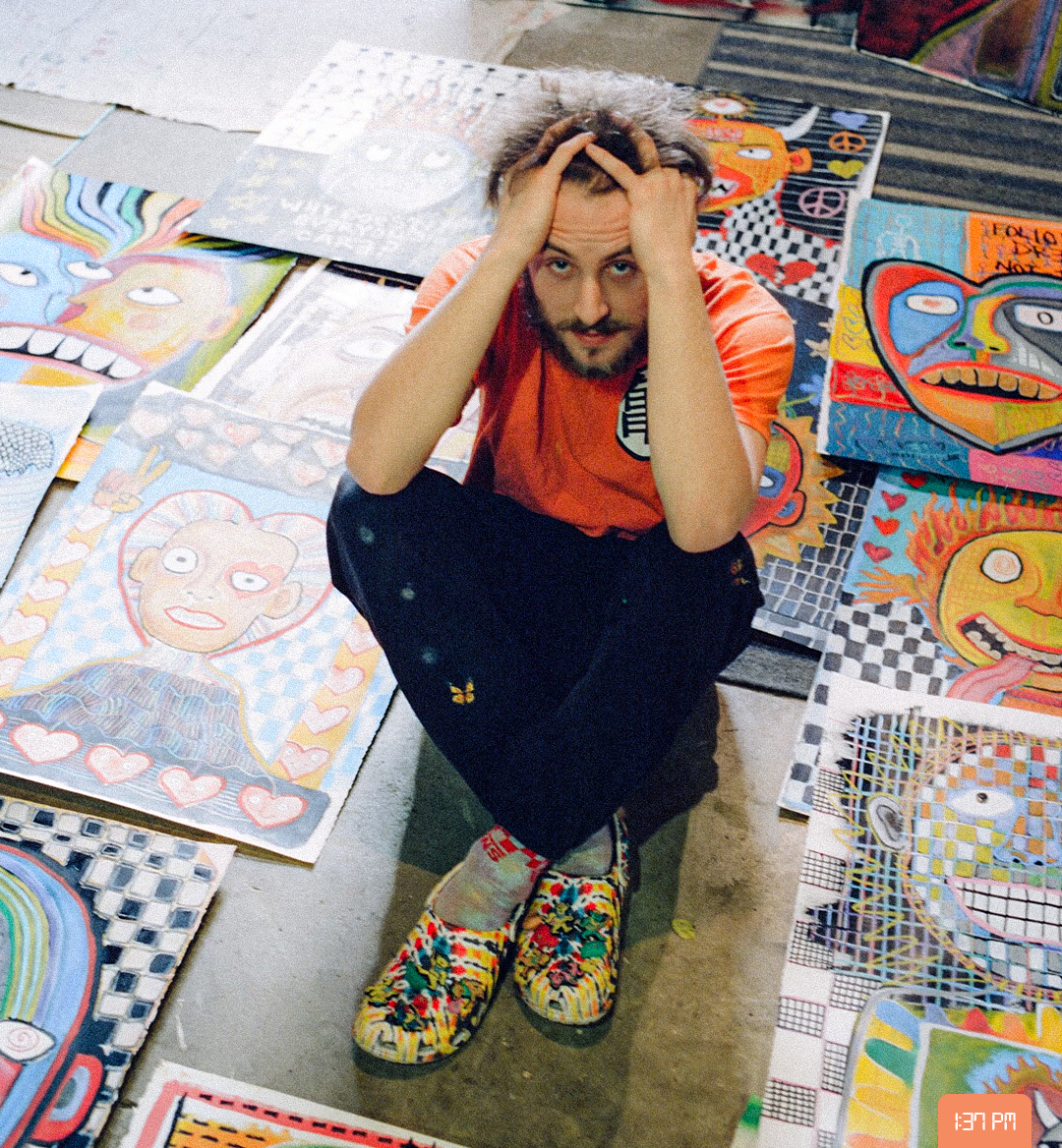 Steven Rea in his studio / Shot by Malaki Butow

If you’ve been in the NFT space for a while, you can feel it in the air. We are on the cusp of a turning point. As we emerge from a bear market, new and exciting projects are finally getting their due. It’s the dawning of a new era: the era of the artist. 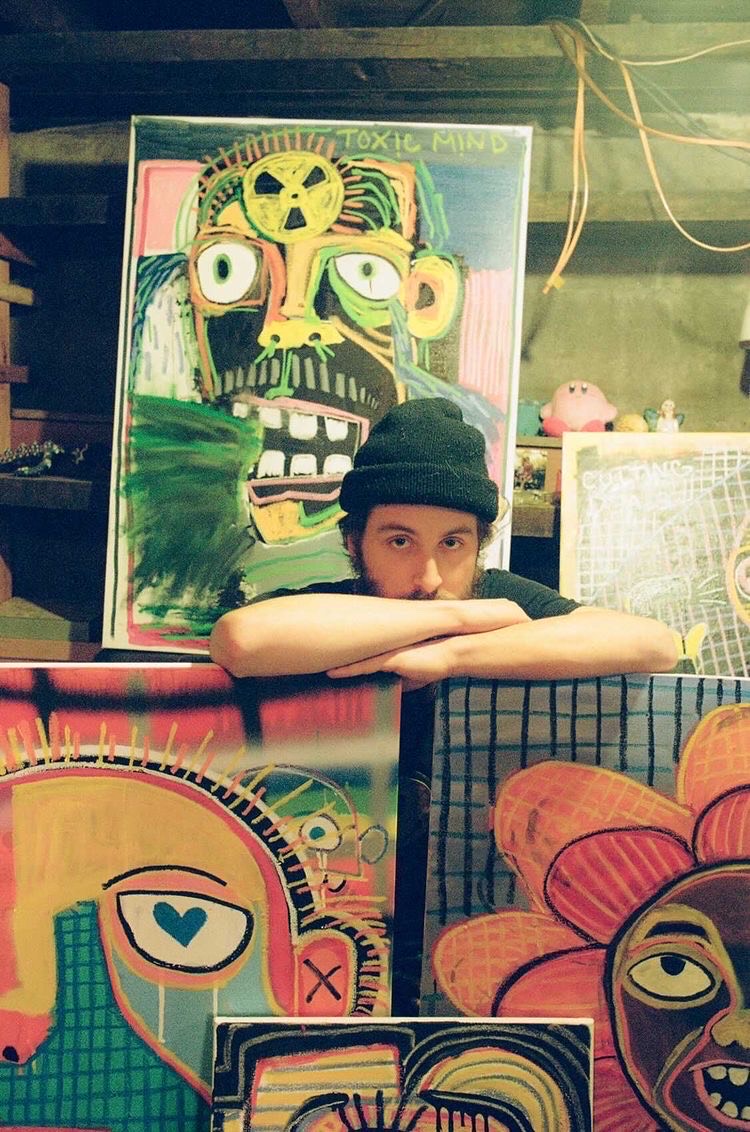 There is perhaps no artist in the space right now who embodies the current moment better than Steven Rea aka BRAiN VOMiT. The Bay Area-based artist launched his avatar project earlier this month, and it sold out in a few-hour span this past weekend before lighting up the secondary market. Over 1K ETH has been exchanged on the project already on OpenSea, with a floor price over .7 ETH at the time of writing. Perhaps the most remarkable statistic from the project thus far is the ownership. With only 4,444 items in the collection, BRAiN VOMiTS GARDEN boasts a whopping 2,300 collectors. Even for a 10k project, that would be an incredible distribution.

I was lucky enough to get to catch up with Steven hot off what I can imagine must have been one of the most exciting weekends of his life.

Steven’s work—and its incredible success—is a step in an evolution towards avatar projects created by more traditional artists, rather than faceless dev teams. So naturally, I needed to start our conversation by hearing how Rea got into painting to begin with. The son of a car builder, Steven grew up infatuated with the work of one of his father’s friends, who would sketch the drafts of what the cars would ultimately look like. From an early age, he was gifted books like “How to Draw Muscle Cars,” which comprised his first entry into representing the world in front of him on the page.

As he grew up and got into skateboarding, he became intrigued by logo design, drawing various iterations of famous icons—invoking a hypothetical Steven Rea x Skate Brand collaboration. But his style was always unorthodox; look at his collection and that becomes clear quickly. Steven’s work doesn’t intend to replicate the world around him verbatim. Instead, it’s like poetry. His experiences and perceptions are regurgitated in a manner that extends beyond the reaches of realism. He confides in me how some of his high school teachers were critical of his work, enforcing comparisons with other artists. Chiding, “c’mon, look at their stuff. You think you can advance to the next class?” it was clear that Steven’s work would not fit into the traditional conception of good art.

A broken foot his junior year of high school restricted his skateboarding, leading Steven to step behind the lens. After graduating, he started taking photo classes at the community college to “get my parents off my back.” And eventually he made a decision: “I’ll go to art school for photography. Fine.”

After spending 2 or 3 years at the Academy of Art, amid concerns surrounding the school’s violations of property law in San Francisco, Steven dropped out. He didn’t know how to tell his parents; this was a period of uncertainty and, luckily, growth.

He spent this period skating around the Bay. And one day, “My friend was like, ‘Wanna take mushrooms for the first time?’” If you’ve browsed through Rea’s work, you can see the inspiration of psychedelics in some of his patterns and color usage. This first psychedelic experience catalyzed his practice of constant journaling, which ultimately snowballed into some of the designs we know today. “And it just turned into this thing where I was like, ok I’m quitting my fucking job,” he tells me.

He would spend hours head-down in his journal at local coffee shops, to the point where regulars started asking him what he was working on. He was hesitant about sharing his work at first: “I couldn’t stand the idea of someone looking into my mind—as honest as possible.” But that fear eventually dissipated as people began asking to purchase prints and stickers of his work, finally leading him to begin selling prints on his Instagram.

Then the pandemic hit, so he went to his local art store and made a huge haul. “If we’re going on lockdown and I can’t even walk in the store, I’m getting as much as possible and I’m just gonna start creating bigger.” This is where his practice of “creating a canvas a day” began. He notes to me how he was surprised to see “how easily my mind let it out.”

His following increased partially due to a plug from Killer Mike—a “friend from his photography days”—or as you and I might know him, half of the legendary rap duo Run the Jewels. He started making some money off of his Shopify throughout the pandemic, and then 2021 rolled around.

I didn’t compare myself to anyone or any category. I wasn’t inspired by one set category of art. This is just brain vomit.

The brain vomit ethos courses through all of Rea’s work; he divulges intimate thoughts and doesn’t filter out anything that could be deemed too personal. The work has come a long way from when he was hesitant to share his journal with folks at the coffee shop.

Part of what has set Steven apart from some other NFT creators is his commitment to building his brand as an artist, as Steven Rea. While many projects at this juncture shy away from doxxing or identifying the person behind the work, Steven’s face and name are tied to his projects. “I want you to know who I am. I want to make those connections,” he tells me. This is all part of Steven’s commitment to building a transparent community.

I want you to know who I am.

Then finally, on November 8th, Steven tweeted: “Wen do I get a @garyvee follow is the real question"” Gary followed, reached out to him and immediately fell in love with the work and Steven’s commitment to growing his personal artistry. So a few days later, he tweeted about the project, sending the mint for Steven’s BRAiN VOMiTS GARDEN into an absolute frenzy. From the time Gary tweeted about it to sell out, about 30 minutes went by. A half hour that Steven spent at a Golden State Warriors game losing his absolute mind.

Wen do I get a @garyvee follow is the real question 👀

Following the sell out and quick launch into NFT stardom, Steven remains humble and committed to his community above all. Rea was quick to credit his developers and shout them and their work out in our conversation. His team includes smart contract developer Marcus Fong and generative/metaverse dev John Turnbull. “I just got to change my developers’ lives,” he tells me, adding: “Fuck my life, I barely even care because all this stuff, all the money, it’s staying in the community wallet so I can build the brand.”

Rather than buying a Tesla or dumping all of his earnings into a major NFT project, Rea is committed to uplifting other smaller artists. So far, he’s only spent a bit of the money: “I’ve only bought from artists I fuck with in the space. And I donated 3 ETH to a mental health charity.” He’s also been fielding interest from his Discord, seeing if there are other charities or projects the community wants him to support. He did this while I was in the process of writing this story:

And the cat is outta the bag again. Time to help re !bloom the world. Little by little https://t.co/w1dNZBTCr2

If you spend a little time in the Discord, you’ll quickly find that it is one of the kindest, most welcoming communities in NFTs. Rea has heard from friends and peers that they love the project because of his transparency, essentially: “Hi, this is me.” And now that the community is growing, Rea remains steadfast in his belief that he should be instrumental in uplifting his audience. “Now that I have this community, I’ll release special shit for them—that’ll bring more value to the brand.” He plans to send tee shirts to the holder of every single flower, meaning that if you own more than one, you’ll get more than one. “I think it’s just crazy enough to work,” he cheekily notes to me about his extensive plans for the future.

I wanted to hear of some of Steven’s favorite projects in the space right now, to which he eagerly sent me a list. Twisted Tweaks, Cake Nygard, Jake the Degen, Brain Pasta and Bonshiki Art all came up in our conversation. As an NFT editor, one of my favorite things about profiling people in the space is giving them the opportunity to put others on. So if you like Rea’s work, check out the work of some of his friends.

The Future of BV:

His developers are building a virtual garden for holders to explore, merch is on the way and Steven even has a vast array of physical art that may become available to the community at some point. “I’ve always wanted to do a full on brand,” he tells me. With one of the hottest projects in all of Web3.0 under his belt, the time is now. Still in disbelief through our entire conversation, Steven leaves me with a respite from the cohesive reflection on his success: “I don’t even know how to fathom this still.”

For someone who supposedly doesn’t know how to fathom this, he certainly has an incredibly well-developed takeaway from his experience thus far.

This is the next wave. Real artists creating real things.

The author of this article is a BV GARDEN holder.