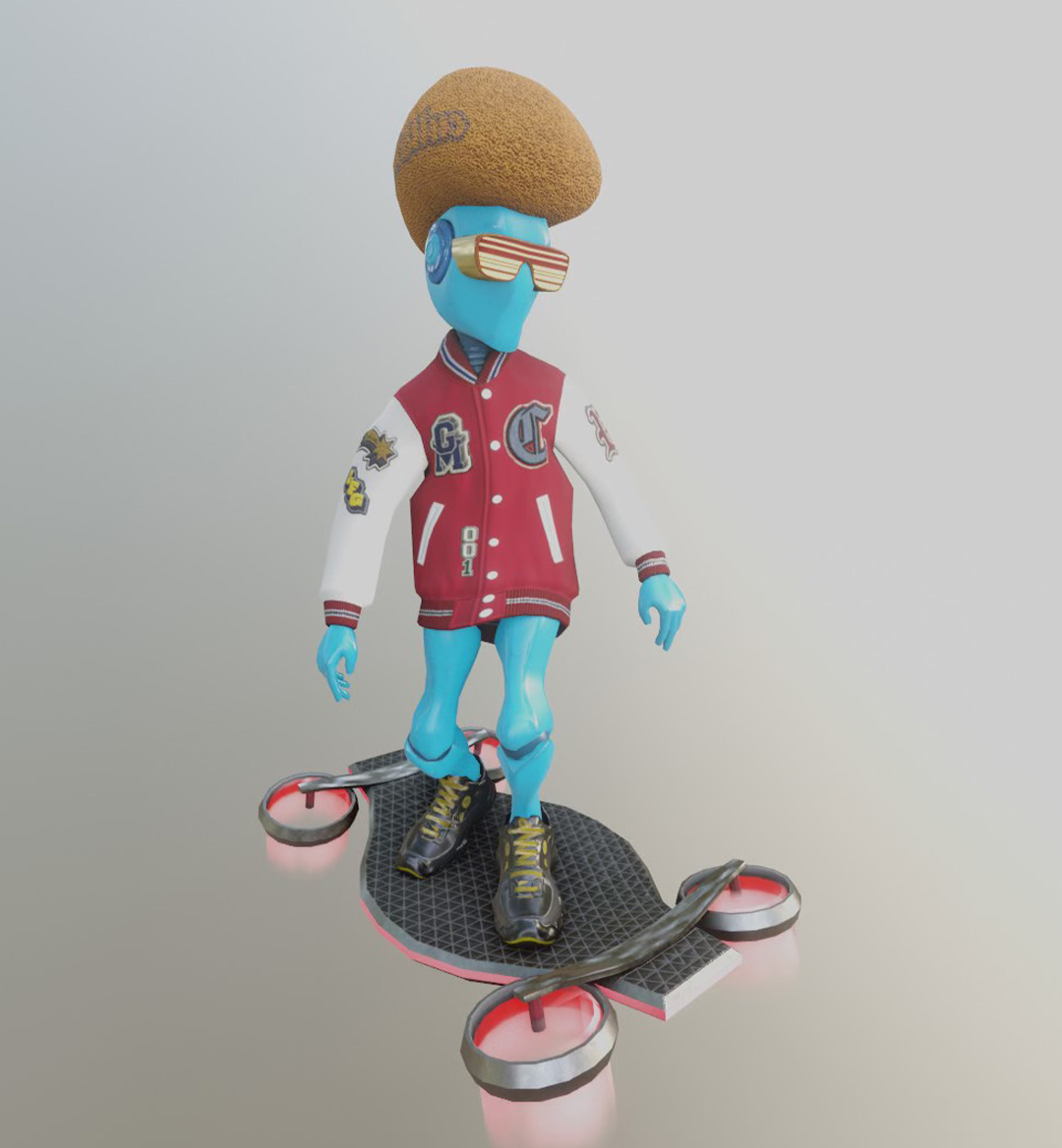 For many in the world toeing the line between NFTs and fashion, the concept of phygitals is one of the most exciting new frontiers in the collectible landscape. By integrating aspects of both traditional fashion with the burgeoning world of the blockchain, phygitals represent a kind of collectible with appeal to both those who prioritize tangibility and crypto-maximalists excited about an impending digital world.

That’s where a brand like CULT&RAIN comes in. Founded in 2021 as a luxury fashion house, founder George Yang envisions C&R as an entire world of possibility for the future of web3. I caught up with George and CMO Andy Griffiths to hear a bit about how they started the brand, the CULTR WORLD activation this week and the expansive future laying before us.

Leakin' alpha 💦 to quench thirsts in this summer heat wave 🥵 with sneak peeks of the CULTR W🌐RLD unveiling. @OuternetGlobal 🇬🇧 will be turnt up; shhh 🤫 we got somethin' special for virtual attendees too!

Permission granted to get hyped. 🫡 pic.twitter.com/onXbkIb91f

Both George and Andy hail from a traditional fashion background. George worked in Milan and Paris for ten years, for a myriad of brands from CoSTUME NATIONAL to Cerruti and more. He had actually initially begun his career in tech, but quickly hated it. “So I packed my bags up, sold my car for tuition and moved to New York City,” he tells me. He went to Parsons before going on to spend a decade in the traditional fashion industry. After returning to NYC last year, George began CULT&RAIN as the culmination of brewing frustrations with the old guard of fashion.

“He and I built CULT&RAIN from ground zero,” George references Andy to me as he joins our zoom call. Andy boasts an incredibly impressive career as well, having worked for brands from Margiela to 7 For All Mankind, just to name a few. “Now, we’re trying to make history with CULT&RAIN,” George tells me.

George and Andy both tell me about how their careers informed an overall frustration with the mechanics and bureaucracy of traditional fashion. From the outdated calendar system to the department store pipeline, I’ve heard many of their qualms repeated by others in contemporary fashion. "My last season in Paris, I was just like, ‘Man what am I doing? Why am I designing another collection for runway as if we don’t have enough clothes out there?’”

“It was built out of frustration,” George tells me. Burned out from designing clothing and a lifelong sneakerhead, George initially wanted to produce sneakers. When he had moved back to NYC, his wife made him sell some of sneaker collection (much to his dismay). StockX disappointingly told him some of his coveted pieces were fake. As someone pretty well equipped to verify authenticity on his own, this moment sparked an idea for a way to truly validate authenticity.

The initial idea for CULT&RAIN was to create a line of luxury sneakers, produced in Italy, each with an NFC chip inside tied to the blockchain for ownership authentication. The chips aren’t in this first run of shoes (it’s difficult to explain and integrate the kind of technology to Italian factories that have been producing luxury goods the same way for decades), but that initial concept is what led to C&R’s genesis sneaker drop.

So when NFTs began booming last year, George saw the craze as an opportunity to crowd source funds to eventually build the sneaker model. “I wanted to do ultra luxury, ultra niche, ultra scarcity. The Supreme model, on steroids,” he chuckles to me. So they created the first collection and sold 1,406 sneaker NFTs at .5 ETH each, giving C&R the initial capital needed to start building the rest of George’s ideas.

"If RTFKT is Supreme, we want to be like Balenciaga,” George tells me as he shows me the incredible physical prototype of their first sneaker. "I spend half my time on product," he goes on, adding: "Creating sneakers from 0 is impossible basically." Their original collection sold to customers in 41 countries. Couple that with the numerous supply chain issues going on right now, and the shipment of the physical shoes has been delayed a bit.

3rd trip 🛬 to Italy to check on the progress on the sneakers. 👟⚒️🇮🇹

A lil' video 🎥 of the sneaker fit. 😏 pic.twitter.com/LhbUJ4HRwx

In April, they did a drop of a collection of varsity jackets. “That was another proof of concept, People still believe in our phygital luxury model,” George says.

We know that digital wearables are the next frontier.

Welcome to CULTR WORLD, our vision of a #metaverse that represents the elegance of luxury #fashion and the spectrum of #culture, creating a virtual social shopping experience built by our frens at @SwivelMeta. 🌐⚒️👽 pic.twitter.com/kSKtnHjilC

As the shoes continue to be produced and shipped, CULT&RAIN has begun work on another, farther reaching project: CULTR WORLD. For this idea, they partnered with a metaverse builder called Swivel Meta to build their very own metaverse. Popular metaverses right now like Decentraland and Sandbox certainly have value, but they’re too lo-fi to appropriately represent the luxury goods C&R envisions in the digital world. “We wanted to stay on brand and follow our luxury vision and build something radical,” says George.

CULTR WORLD is absolutely epic. “We tested a lot of different environments to get to what you see right now, exploring a lot of things that have never been done before,” George tells me. And it’s true. The CULTR WORLD space is much higher-fi than a lot of other metaverses, and integrates some of the brands motifs like rain into the realm. Right now, the world is comprised of two spaces: CULTR LOUNGE and CULTR SHOP. But there are many more to come. 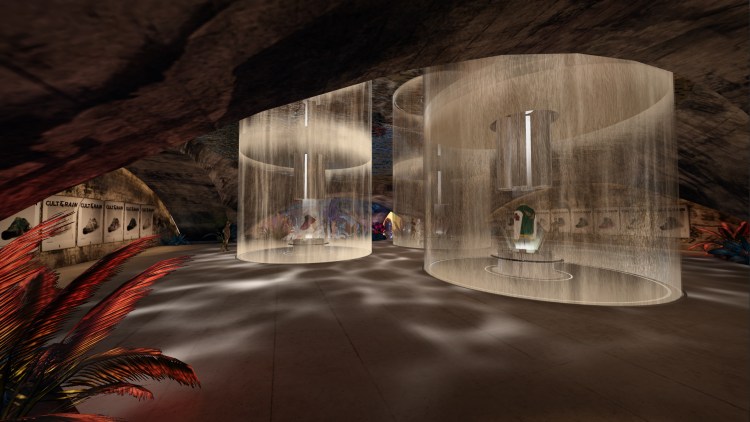 CULTR LOUNGE is meant to alleviate some of the burnout folks are feeling using Discord and Twitter Spaces, creating a new venue for the brand’s audience to connect. “I think this kind of interaction is the future,” says George.

The CULTR SHOP is one of the other most exciting parts of the new world. “Virtual social shopping is obviously the next frontier to ecommerce,” George says, going on to explain the different mechanics that will be eventually available in the space. In the future, users will be able to buy phygital collectibles, physical only items and digital wearables in the shop. For the activation this week (more on that in a moment), attendees can explore NFTs through a redirect to OpenSea, and will be able to directly access a POAP within the space tied to four limited edition digital wearables.

The third element of CULTR WORLD to come down the line will be CULTR PAD, an NFT project comprised of a personal location for the buyer tied to the wider CULTR WORLD. “It’s your own spaceship,” George explains.

CULTR GAMES will come next, and finally, an avatar collection. Right now, users can choose one of a few avatar options for their journeys into the space, but there will eventually be a whole collection.

One of the other interesting mechanics of CULTR WORLD is the idea that the whole world lives within a digital truck. Hypothetically, this truck could get parked in another metaverse (once integration between metaverses becomes more ubiquitous), always offering users access back to CULTR WORLD. 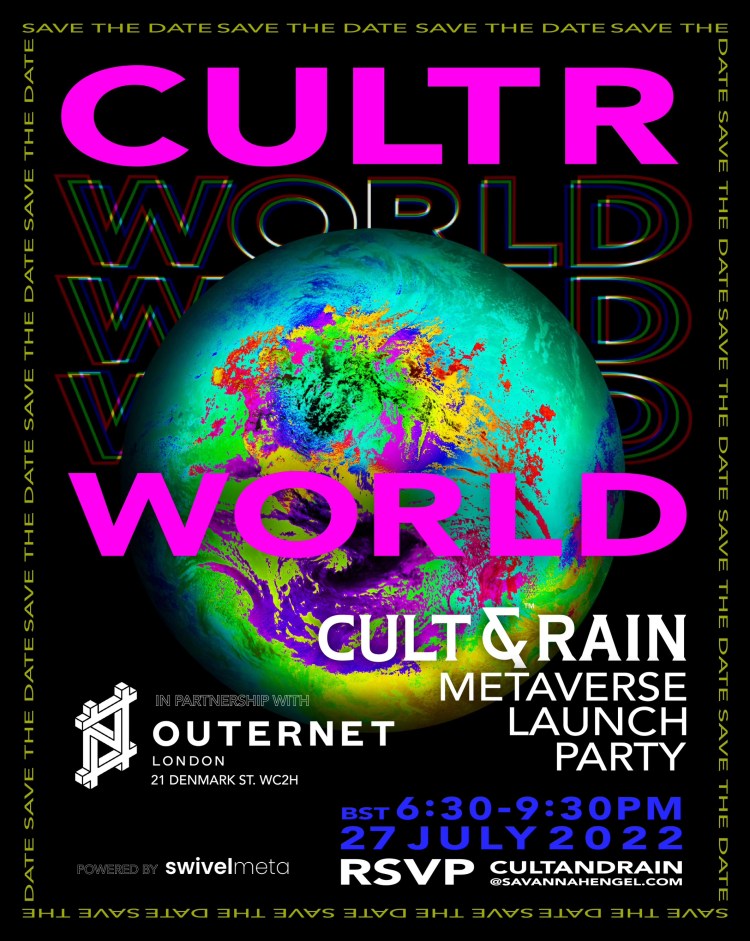 On Wednesday, July 27th, CULT&RAIN will be hosting a dual digital/irl event to kick off the metaverse hosted in person at Outernet in London. The party will truly be an event out of the future, integrating elements of AR and the metaverse into a physical event rife with futuristic beverages and walls of screens forcing the viewer to wonder whether it’s an IRL event or not.

On the day of the launch, the CULTR SHOP will include displays with links that bring users out to OpenSea for now to shop the collections. In the middle of the space, there will be a digital wearables case. The first 200 people to claim the POAP attached to the item with receive four limited-edition digital wearable compatible with Decentraland. Additionally, everyone who attends the physical event will get a wristband that also gives access to the POAP.

If you’re in London and looking to attend, RSVP at CULTANDRAIN@savannahengel.com. Or join the virtual event from anywhere in the world.