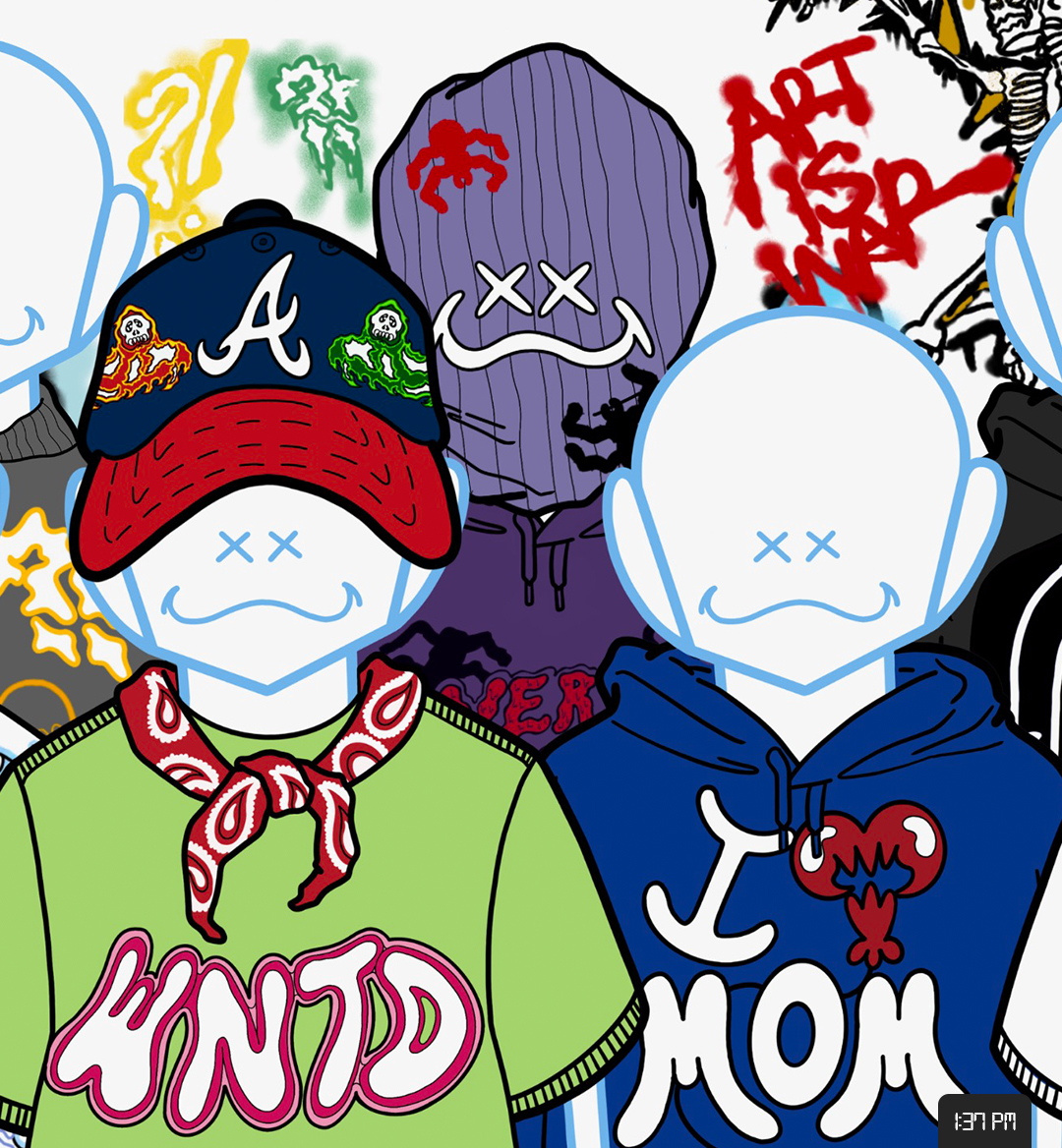 NFTs are easily the biggest buzzword of 2021, and their increasingly massive market has opened up an entire world of opportunities for hungry creatives like LA-based artist and designer, Bluboy. The young Atlanta native initially began his career as a visual artist, but eventually transitioned largely to fashion to bring life to his countless doodles and designs. Not long ago, Bluboy’s brand, WNTD Apparel, collaborated with famed jean manufacturer True Religion. Now, he’s applying all of the skills acquired in his seven year career to combine the seemingly disparate worlds of clothing and jpegs.

Blu recently launched the first batch of his NFT collection BluWorld, a series of cross-eyed characters wearing an array of the artist’s designs. Each NFT is uniquely individual, coded to have distinctive attributes that call back to motifs and designs from Bluboy’s archive. To mark the collection’s release, we were fortunate enough to sit down with Blu to discuss the beginnings of his career, his clothing company, and the merging of NFTs and fashion.

Bluboy found his passion for the arts at a young age, sketching incessantly beginning in middle school. He began to build his own world, creating characters and posting his illustrations to the internet. However, Blu began to feel like he was unable to express himself fully solely through artwork, and in high school he searched for other avenues to fulfill his creative itch. The artist quickly landed on fashion, and found that he enjoyed the accessibility it afforded his artwork.

Clothing became the canvas for Bluboy’s creativity as it allowed his audience to tangibly interact with the world that he had created. Blu named his brand WNTD Apparel, an acronym for “What Not To Do”, as an homage to his rise as an emerging artist with very little in the way of formal education in fashion design. “It’s for those coming the alternative route with a dream, who don't know what they should exactly do, but have a dream regardless,” Blu describes.

Bluboy eventually realized that his education was not conducive to the career he wanted to pursue and ultimately dropped out, having been urged to do so by an encouraging art professor. Fueled by his passion, Blu put his head down and focused purely on his artwork and design practice, all while reselling clothing to support himself. One of the artist’s first big breaks came when he had the opportunity to design merchandise for 2Chainz’ album Rap or Go to the League. The five figure check he received for the work was a watershed moment, signifying that Bluboy’s intended path truly had promise. Another heartwarming milestone for Blu was the inclusion of the aforementioned art professor in the look book for his fifth collection, proving that his mentor’s faith was not misplaced. 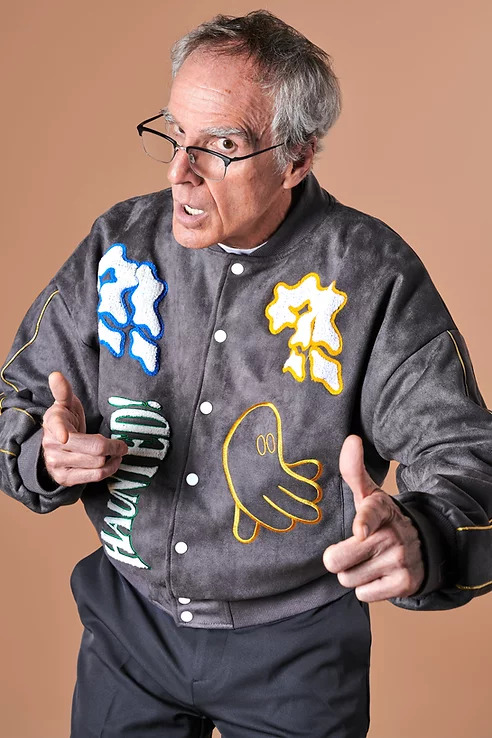 As WNTD Apparel grew, Bluboy’s vision grew alongside it, eventually opening the door to collaborations with household names like True Religion and MCM. Blu was introduced to the team at True Religion through a friend who had the opportunity to do a capsule with the brand, and Bluboy was soon invited to do the same. After being given full creative freedom with his own collaborative collection, Blu set to work creating a stunning array of denim that features patches that combine motifs and marks from both the WNTD and True Religion archives. Blu’s popular ghost character is worked into several of the patches, as the petals on daisies and on the guitar of the iconic True Religion Buddha. The collection released in late October and is currently sold out, but keep your eyes peeled for a restock in the near future.

On top of the True Religion collaboration, Bluboy worked with Under Armour on the Curry 7, MCM on a series of customized bags, and will soon be featuring his designs on the can’s of America’s favorite citrus drink, Sprite. Bluboy shared a particular excitement with us about the Sprite collaboration, as the company is allowing him to propose five other artists to create their own can designs. The gravity of this position was clearly not lost on Blu, as he expressed his gratitude and rightful pride to be putting others on.

With his fashion career well on it’s way, the ever curious designer sought new avenues to display his work, and eventually stumbled upon the world of non-fungible tokens. Blu was hounded by his close friends to enter the space, and with good reason. Bluboy had been making and uploading his artwork for free for years, and here was the perfect opportunity to monetize it. The designer saw what his friends like FEWOCiOUS were able to do within the NFT space, and quickly gained access to a foundation invite to begin listing his own work. Initially he listed only 1/1 art pieces, but soon realized that editions opened up an entirely new world to conquer.

Feeling as though most edition projects were low quality and somewhat gimmicky, Blu set about creating an algorithmic body of work that was true to himself and had not been seen before within the crypto space: the Blu World. Due to his apprehension about large scale editions, Blu ensured that each piece he created was on par with the quality of his 1/1s. Each and every NFT in BluWorld features references to Bluboy’s earlier artwork and fashion, creating a unique cast of characters that catalog his artistic canon. On top of the monumental task of creating the NFTs, the artist chronicled the experience in a short documentary to share his process.

It’s clear that transparency is paramount to Bluboy, as he describes the anonymity of the crypto space as a trait he doesn’t like too much. For Blu, creating personal work demands that the person behind it be seen.

After the first thousand works of the 5,000 piece series were completed, Blu released his first drop to resounding success. The collection sold out entirely, and at the time of writing nearly 45 ETH has been traded on OpenSea. Excitedly, Blu told us that the next batch will drop on December 8th. Mark your calendars.

What Does the Future Hold for Bluboy?

Blu’s forward thinking nature means his career is in constant flux, and the newfound intersection between design and technology has opened up a whole host of opportunities for the designer. With the metaverse around the corner, Bluboy wants to take advantage of the situation and bring his world even further into the digital realm. On top of that, the collaborations do not seem to be stopping, with Bluboy lining up more work for True Religion, MCM, and Sprite in the near future. Brimming with excitement, Blu tells us he can’t wait to show us what he’s working on, and rest assured that the feeling is mutual.

What is LooksRare and How to Claim Your $LOOKS Tokens