From Part-Time Construction Worker to Full-Time in NFTs 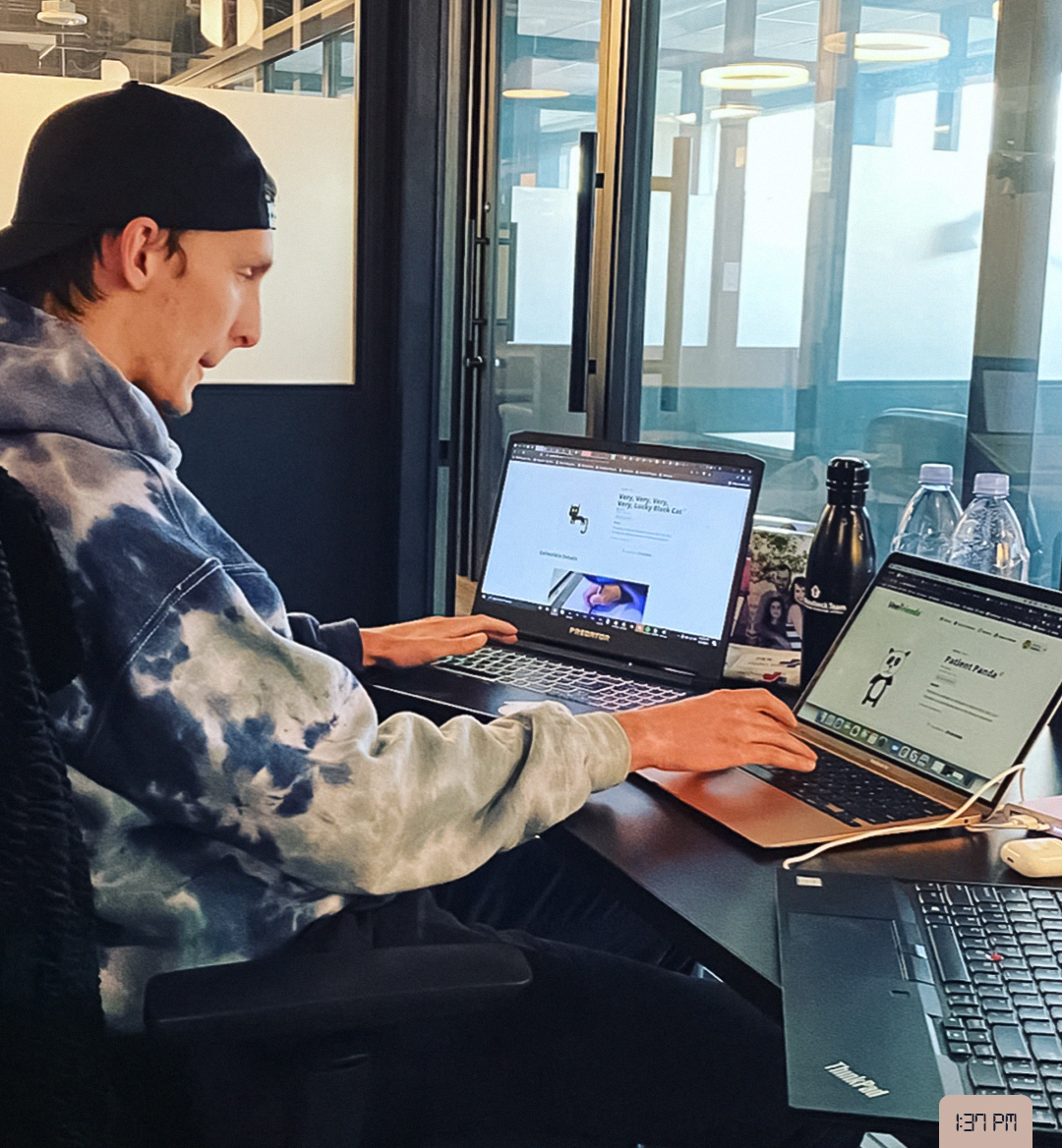 The NFT market is growing at a rapid pace. Even a small amount of time spent on Twitter gives the impression that a lot of people are making life-changing money with NFTs seemingly overnight.

However, if you dig deeper into some of these success stories, you’ll often learn that a lot has happened beneath the surface for those people to get where they are. It’s critical that we share these stories to help people adjust their mindset and get inspired to put in the work instead of rapidly spending money in hopes that something will stick.

In this article, I detail the story of Ezrawithacamera, a 24-year-old videographer originally from the small town of Webberville, Michigan. Ezra was able to build up a portfolio of NFT assets that have given him a large enough safety net to leave his rewarding videography career at Thrive Realty Co—a cutting-edge real estate brokerage—to pursue NFTs full-time.

For those feeling left out of the NFT rush, or ones wondering what to do next to level up their NFT journey, Ezra’s journey highlights the fact that many of the “overnight success” stories were actually years in the making.

“You’re one person away from changing your entire life trajectory.”

After dropping out of college while studying computer programming, Ezra started working in construction to make money while figuring out his next move. He had always loved computers and knew that technology would be a big part of his life, but he wasn’t yet sure how that would play out.

He explained that he would often share his passion for computers with his co-workers, which would later prove to be the catalyst for his ensuing career in crypto and NFTs.

One of his co-workers first introduced him to Bitcoin, but quit to start his own company before Ezra could learn more. About 6 months later, by pure coincidence, Ezra ran into his former co-worker at a gas station while filling up ice for his crew. That co-worker had started his own Bitcoin mining operation, which motivated Ezra to research more about cryptocurrencies.

As he started the process of self-education, Ezra decided to follow Gary Vaynerchuk’s advice and attend a meet-up group about Bitcoin. It was about an hour away, and even though he almost didn’t go because he was tired from a day’s work at the construction site, it was yet another pivotal moment in his journey.

When he arrived at the meeting, he began showing some of the members a mining computer he built on a bamboo shoe rack: 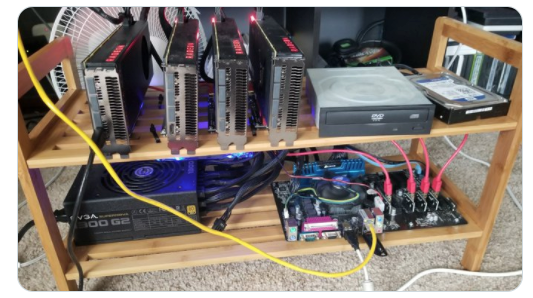 After showing it to a few people, someone introduced him to Jake Herbert, a former Olympic wrestler. Herbert was looking for partners to mine Bitcoin and after learning that Ezra had built a computer, the two decided to work together.

While they didn’t make much money with the operation, Ezra learned a lot and developed a strong conviction for Bitcoin and the concept of cryptocurrency. It took getting into the weeds to help him fully understand it, but now he was ready to do what it took to purchase the asset.

The reality is that any investment comes with risk, which is why it is important to never spend money you can’t afford to lose. If you have conviction in a project, an asset, or other investment, it sometimes requires sacrifices to get them.

After leaving the mining operation, Ezra landed at a real estate company as a videographer and storyteller, but he couldn’t get Bitcoin out of his head and made a very real commitment to helping grow his portfolio:

Ezra approached the owners of the real estate company and asked to take just $8,000 of his salary, with the rest invested in Bitcoin.

He had developed enough belief in Bitcoin to make a move that most other people wouldn’t be willing to do. He explained that he lived with a co-worker and her boyfriend who were generous in the rent they charged him because they knew about his passion and the rest of his expenses fell into place.

It may be easy to look in from the outside and call this luck, but the reality is that it was a bet placed with conviction, using money that came from cutting expenses to the bare minimum. Please keep in mind that this is not financial advice, it’s merely an illustrative example of the lengths Ezra went to make sure he could invest in an asset that he had a deep understanding of.

Ezra first discovered NFTs on May 8th of 2020, when he applied to be a SuperRare artist, as he needed money after foregoing most of his salary. He had been doing art and was looking for a way to monetize his work, which helped him begin to understand NFTs. While he was ultimately rejected by SuperRare, he sensed the NFTs could become a big market but didn’t rediscover them until the following year with NBA Top Shot. At that point, Ezra had 1.8 Bitcoin available from his earlier savings and investment. He decided to put half of that money into VeeFriends during its launch and was even able to convince his bosses to buy a VeeFriend. 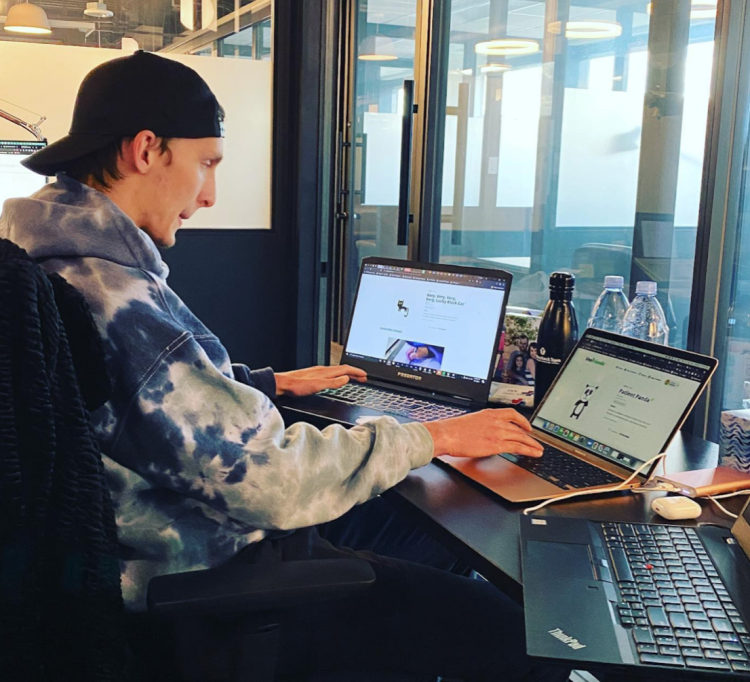 This photo of Ezra was captured while he purchased a Very, Very, Very, Very Luck Black Cat VeeFrind and Patient Panda VeeFriend at the same time.  / Ezrawithacamera

When he told his mom she would be going to VeeCon, she suggested he buy more VeeFriends so his siblings could also attend. It turned out to be one of the greatest pieces of advice from a mother to a son. Ezra was also able to buy into Cool Cats during this time.

On July 4th, while he was alone dog sitting, he finally had time to go deep on NFT research and came across Curio Cards, the first art NFT on Ethereum. He understood the landscape and was able to buy/sell NFT assets with his experience from Cool Cats and VeeFriends.

At the time, Curio Cards were significantly cheaper and have since produced significant returns for Ezra to provide him with a safety net as he thought about his next move. It even enabled him to put money towards the down payment of a home.

Although he didn’t envision investing in NFTs when he started mining and investing in Bitcoin in 2018, his sacrifices paid off by putting him in a position to afford these assets at likely one of the best times in the market.

What does being full-time in the NFT space look like?

Ezra plans to continue taking risks with conviction. He spoke highly of his team at the real estate company, even going so far as to call them a family. Leaving that position was hard, but he knew he had to do it just 4 days prior to our interview.

He explained that he knew for a long-time he wanted to go full-time in the NFT space, but after organizing a Michigan meet-up for VeeFriends holders, it clicked that he had a large enough safety net to take the leap.

While he isn’t stepping into a new job that pays him a salary, he’s trusting that fully following his passion will lead to a good outcome. He explained that he will do six things every single day to help him find his way to a tangible role in the NFT space:

(1) Make connections in the NFT space every day — he’s taking a page out of his real estate company’s book by trying to make 20 connections per day.

(2) Study Innovation and Market Movements — there are a lot of new NFT project launches, which cause both market saturation and an opportunity to learn. Ezra now has the time to study the market, what’s working, and what isn’t to further develop his intuition.

(3) Create Educational Content for Beginners — there were just over 412,000 buyers across the top 4 Ethereum NFT peer-to-peer marketplaces in August (with over $3 billion in sales volume). There are many people who haven’t gotten involved in the space and need to overcome the technical hurdles to do so. Ezra has a track record of demonstrated success so far and plans to help others with his knowledge.

(4) Create Content for His Personal Brand — personal brand matters no matter what field you are in, but given how NFT success forms around the community, this is a critical component of Ezra’s full-time NFT life. As more people enter the space, they will look for reputable advisers and educators who have strong personal brands and reputations.

(5) DAO NFT Sales — Ezra is part of a DAO (Decentralized Autonomous Organization) with other Very Very Very Very Black Cat VeeFriend holders. A DAO is effectively a decentralized investment group. People pool together money and vote on the best ways to spend it. This offers more buying power for savvy investors to place smart bets and split the returns with those who participated.

(6) Create Art — he’s already done 533 days straight of daily art creations (which has since halted due to his new commitments), but this effort will help him think like an artist. It’s likely he will try and create an NFT project, but for now, he’s in learn mode to understand what the market might respond to.

He concluded by saying that he “has something to share and contribute to this space” and that the last time he “fully followed” his passion, it turned out well for him.

Ezra’s journey was years in the making and required significant sacrifice to get where he is today. It started with him recognizing his passion and following up on it through action, by attending a meet-up, joining a Bitcoin mining operation, and ultimately giving up a significant portion of his salary.

He did all of this without knowing what the other side would look like, which is the hardest part. NFTs are a lot of fun but require a serious conviction to get involved because the market changes rapidly.

His story should be a reminder to those of you who want success in any field that it takes time to develop. There are certainly people who have made significant gains due to the rapid rise of NFT values, but many who have benefitted from that have stories that go beyond holding an asset for a few weeks.

As Ezra mentioned, he is looking to connect with as many people as he possibly can in the NFT space. He’d love for you to set up a time with him to chat or help make connections to others on a similar path. If that interests you or someone you know, you can reach out to him via Direct Message on Twitter. Or, if you simply want to follow Ezra’s journey leaving a job he loves to pursue a deep passion, you can give him a follow on Twitter.