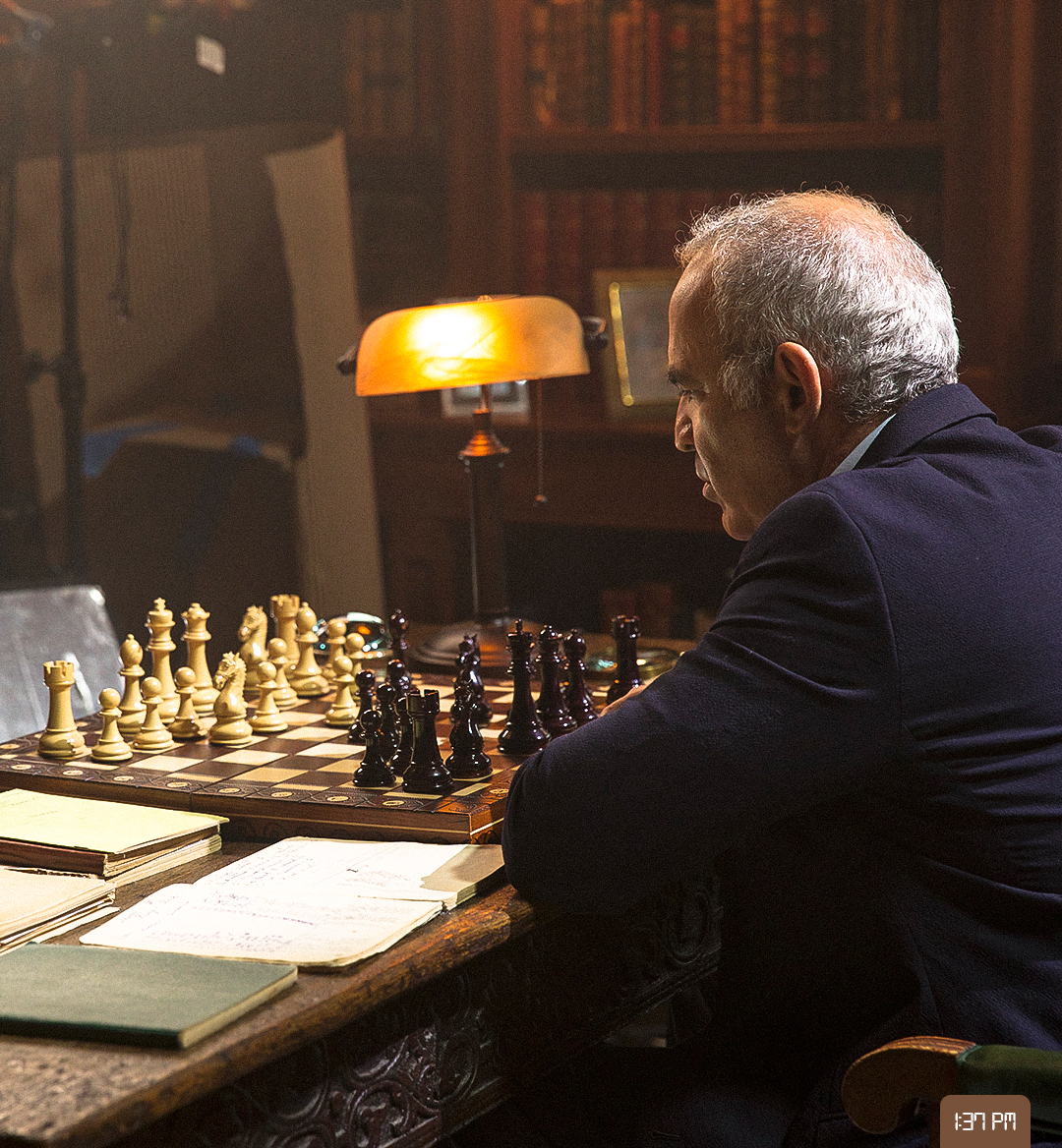 As more people begin to understand the type of unique experiences NFTs can offer, more industries are starting to take advantage of the opportunity to offer fans and consumers something special. One of the new brands that will be offering such NFTs is a platform called 1Kind, which is partnering up with World Chess Champion Garry Kasparov for his first NFT collection.

1Kind is an NFT marketplace founded by Gadi Glikberg and Kristian Heahndel. This NFT marketplace aims to carefully select and collaborate with some of the most profound artists, musicians, and creators to share their personal experiences through the 1Kind platform in the form of NFTs, offering collectors in-person experiences with the artists themselves that can only be had through the ownership of the digital assets.

The first auction for the 1Kind NFT platform is set to go live today, December 14th in partnership with legendary chess champion Garry Kasparov, and will continue until December 17th. Garry will be sharing his life moments with everyone through his NFTs, offering collectors a remarkable look into his life.

Who is Garry Kasparov?

Garry Kasparov is a Russian chess grandmaster, and former World Chess Champion for 21 years straight, from 1984 to 2005. He has played against the greatest minds and even machines in history, and now he is sharing his journey with you on the blockchain.

As a young boy, Garry started playing chess when he was only 6 years old, by the age of 13, Garry became the Soviet youth champion. Three years later he won his first international tournament.

Nowadays, Garry is known as a global humanitarian and is a beloved mentor to modern-day chess prodigies. Garry is widely considered to be one of the greatest chess players of all time.

Modern technology has always been part of my life. That’s why I’ve decided to share my legacy on the blockchain.

This Garry Kasparov drop will occur in three stages. Each NFT selected will have a very special story to go with it. Here is what the how the project will be broken up: 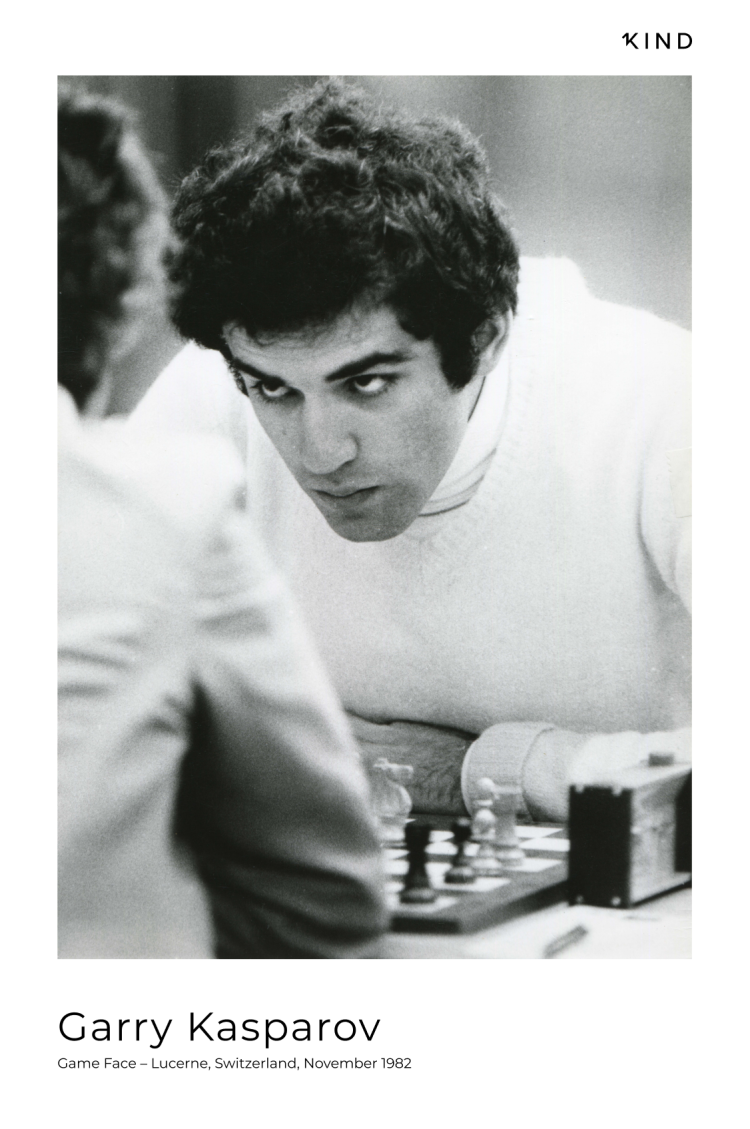 The first phase, Foundations NFTs, celebrates special childhood and family memories that shaped Garry into a world-beating champion. The second phase, Global Player NFTs, offer a rare window into Garry’s early years on the road to becoming a Grand Master and the longest-reigning World Champion. The third phase, Legend’s Legacy, honors Garry’s legacy beyond the chess board; as a mentor, a humanitarian, an activist, and an author. 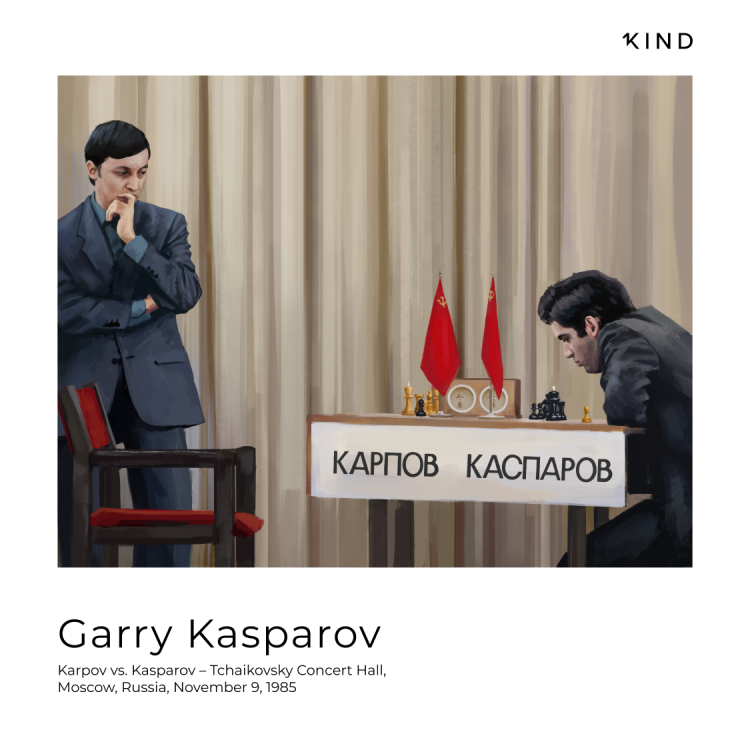 Some of the notable NFTs from Phase 2 include Game Face, Karpov vs. Kasparov, and Game 24 Scoresheet. The Game Face is a rare and candid photograph caught as Garry locks eyes with his opponent, Romanian Grandmaster, Mihhai Suba from Chess Olympiad, taken in Lucerne, Switzerland, in November 1982. Karpov vs. Kasparov is an illustration of the Final World Championship Match when Garry became World Champion for the first time. It depicts Garry’s moment of victory where he beat his eternal opponent, Anatoli Karpov at the World Championship Match held in the Hall of Columns in Moscow, Russia, in November 1985. The Game 24 Scoresheet is a rare memorabilia of Garry's personal scoresheet, signed by both him and by his opponent, Anatoli Karpov from the 1985 World Championship, the game that made Garry a World Champion for the first time. 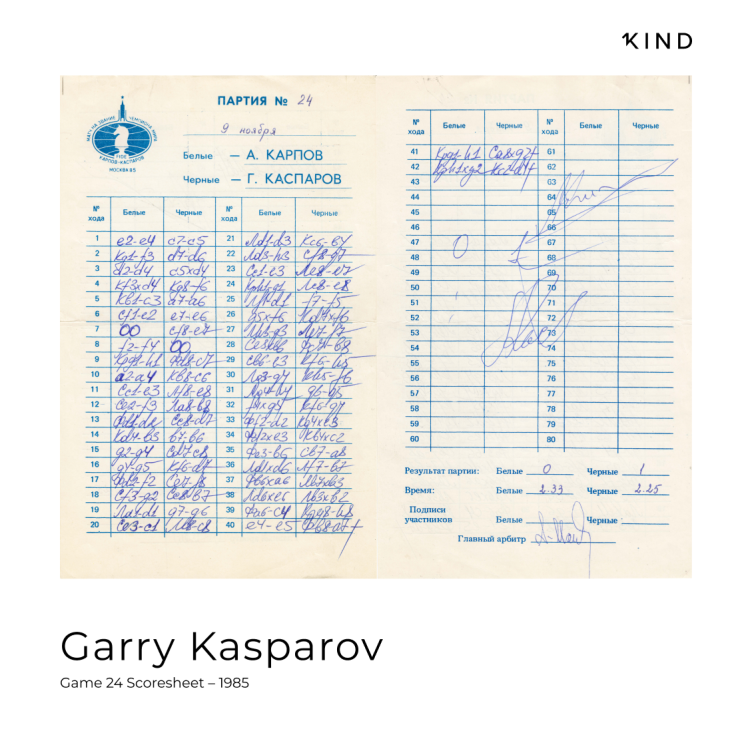 The auction will finish up with a Platinum edition NFT dropping on December 17th. This Platinum NFT includes an exclusive in-person experience with Garry Kasparov that will allow the collector to dine with Garry at the five-star The Plaza Hotel in NYC. Following this amazing experience will be an opportunity to interact with Garry on his involvement in the world of chess.

Garry is also aiming to give back to the community by donating 10% of the winning bid to Kasparov Foundation that provides scholarships to children who are raised by single mothers.

If you want a chance to collect any of these extremely special NFTs, all you need to do is visit the 1Kind marketplace to place your bid. Bidding opens at 4pm EST this afternoon, December 14th, 2021.