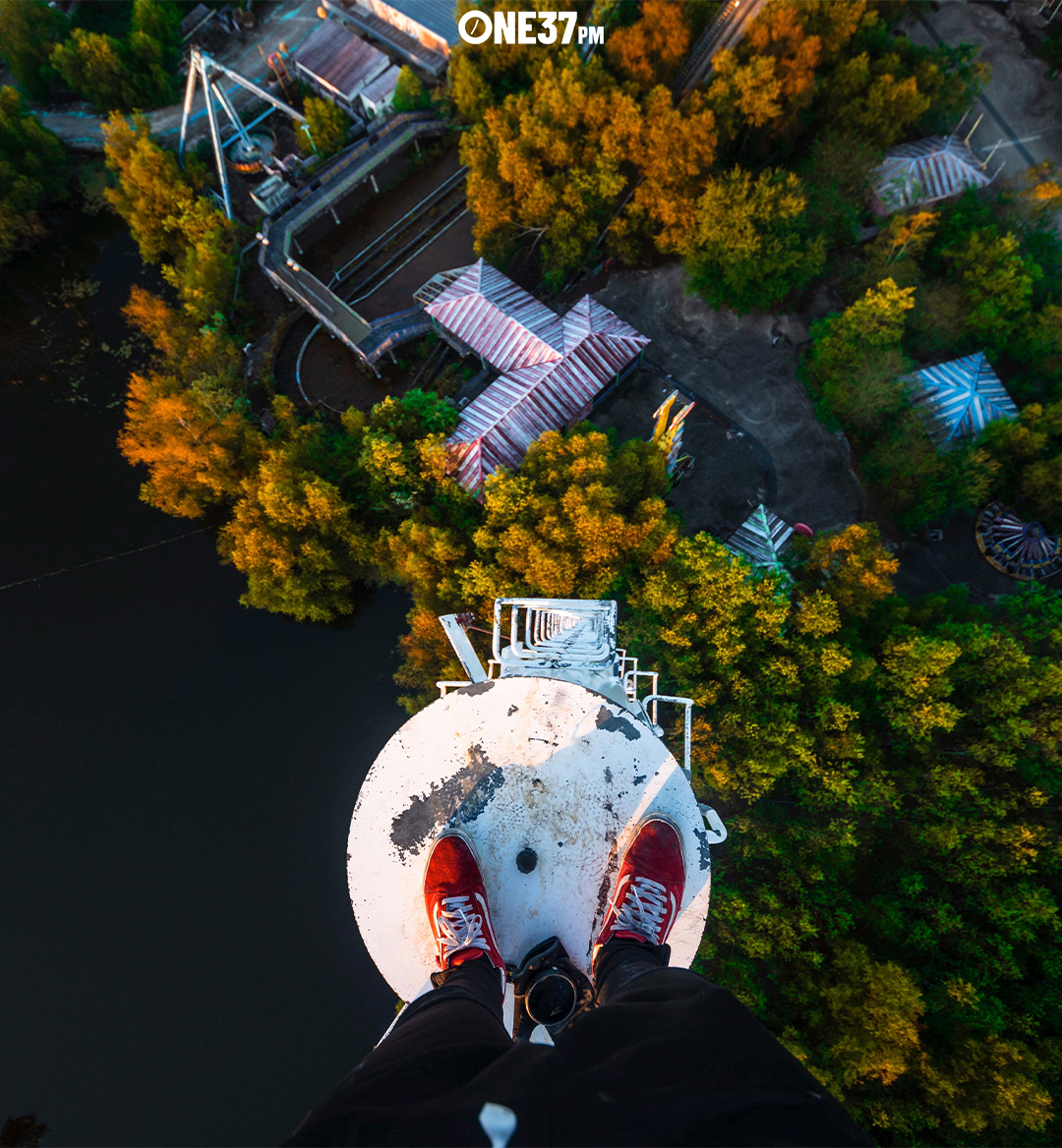 Isaac Wright got into photography through a more circuitous route than most. The former paratrooper’s awe-inspiring project, “Where My Vans Go,” has eclipsed a floor of 30ETH on OpenSea, making him one of the highest-selling photographers in the NFT space. The project, which was the result of years of death-defying urban climbs, was the culmination of a process of escape for Wright. I had a chance to speak with the incredible photographer about how he began summiting the largest urban mountains cities have to offer, how NFT technology is changing the world of art and what he’s working on next.

“It kind of found me,” Wright tells me when I ask him about his process of finding urban exploring as a form of escape. “I’ve always been climbing around things since I was a kid,” he adds, but it wasn’t until a few years ago when his passion for pursuing the clouds re-emerged. About 3 years ago, Wright was embroiled in a very dynamic time in his life—for numerous reasons. And in all of the turmoil, he got his first camera. But his entry into photography wasn’t fostered by any particular goal. “I had a camera because I wanted to take pictures,” he tells me coyly. In this time, he began seeing the urban explorers of NYC taking to roofs and shooting jaw-dropping imagery of one of the most iconic cityscapes in the world.

“I got this itch one night to drive to Houston. I saw this construction site, and made my way up 50 floors.” It was this first climb that catalyzed a perpetual desire to explore. From 50 floors up in Houston, “I had the world in my hands. I felt so incredibly small. Every mental stress was completely gone.” In a moment plagued by the reverberations of his service and the recent deaths of friends and fellow members of the service, Isaac tells me that: “I had just found my place,” adding, “It felt like it was bringing me back down to earth.”

And from there, all bets were off. Isaac went to NYC and climbed a major construction site off of Columbus Circle: “There was just nothing like it in the world. This was the day when I was like, ‘this is what I want to do forever.’” These climbs helped Isaac put the world in perspective. “We as humans are just a small speck in the grand scheme of something far greater,” he tells me. The climbs foster “a level of humility, but also wonder and love. I feel that every time I climb.”

It felt like it was bringing me back down to earth.

If you haven’t yet, scroll through the OpenSea listing for Where My Vans Go. It is a truly miraculous project; you can feel the perspective-shift he discusses coursing through every picture. In recent weeks, the project has exploded in NFT circles. So I wanted to speak with Isaac about how NFT tech is changing his practice and ability to share his work with the world.

“It’s putting power back in the hands of artists,” he tells me. For the longest time, the old guard art world got to decide what art was good or worthy of exhibition status. But now, “the world is the judge of if your art is awesome or not.” And as previously undiscovered artists are able to make money from their work, a lot of that money gets funneled back into the same community, lifting up other artists as well. “By giving artists financial freedom, you’re only investing back in better art. Turning artists into entrepreneurs, investors, business people.” The community has become, in Isaac’s words, “a ladder of one person pulling another up.”

The project has so many highlights, but I had to ask Isaac for some of his favorites. They could ultimately all be a favorite, but he tells me the story of two in particular. 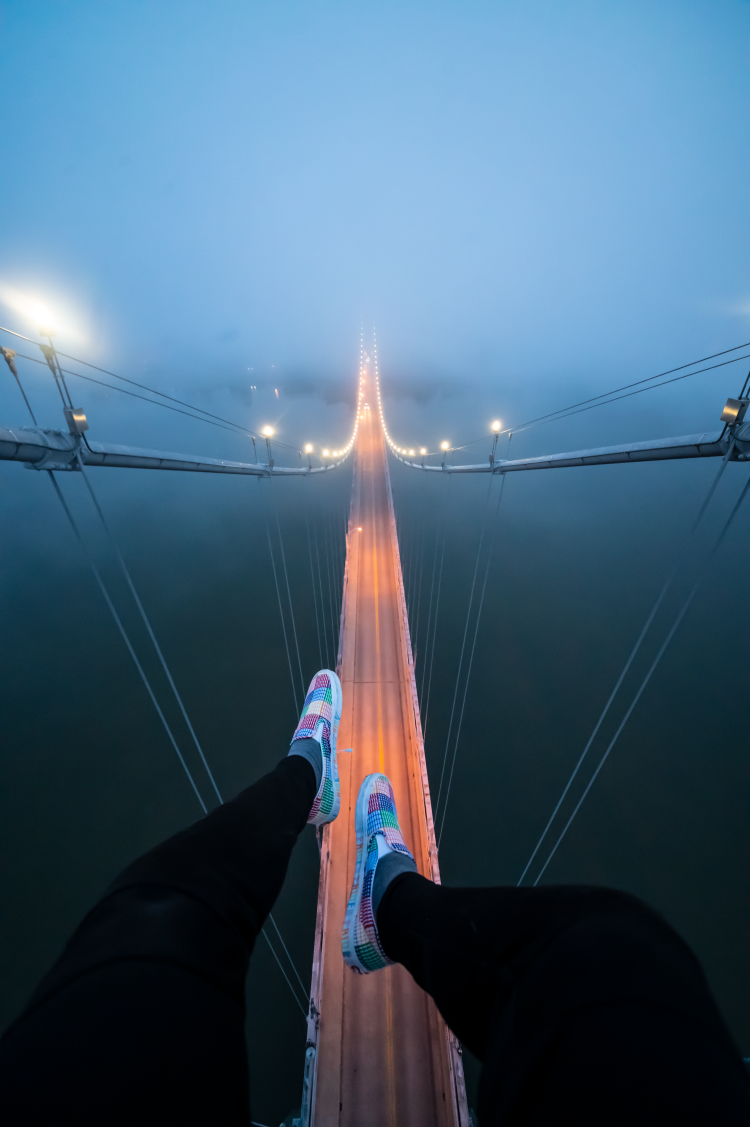 This picture was taken on the Simon Kenton Bridge in Kentucky, a passage with immense cultural significance. Isaac tells me that, pre-abolition and before the bridge was built, this portion of the river was a passageway for abolitionists to aid enslaved people’s quest to freedom, across the river into Ohio. “It was ​​one of those nights where I could feel the history,” he tells me. Upon his first climb, he was much too visible to the cars on the bridge, so he climbed down into the interior of the bridge to sleep in a crevice rife with bird poop.

But when he arose around 4am and made the climb again, he was protected from sight by an ethereal fog. With the cover of fog, “caught in a cloud,” Isaac shot the miraculous image. 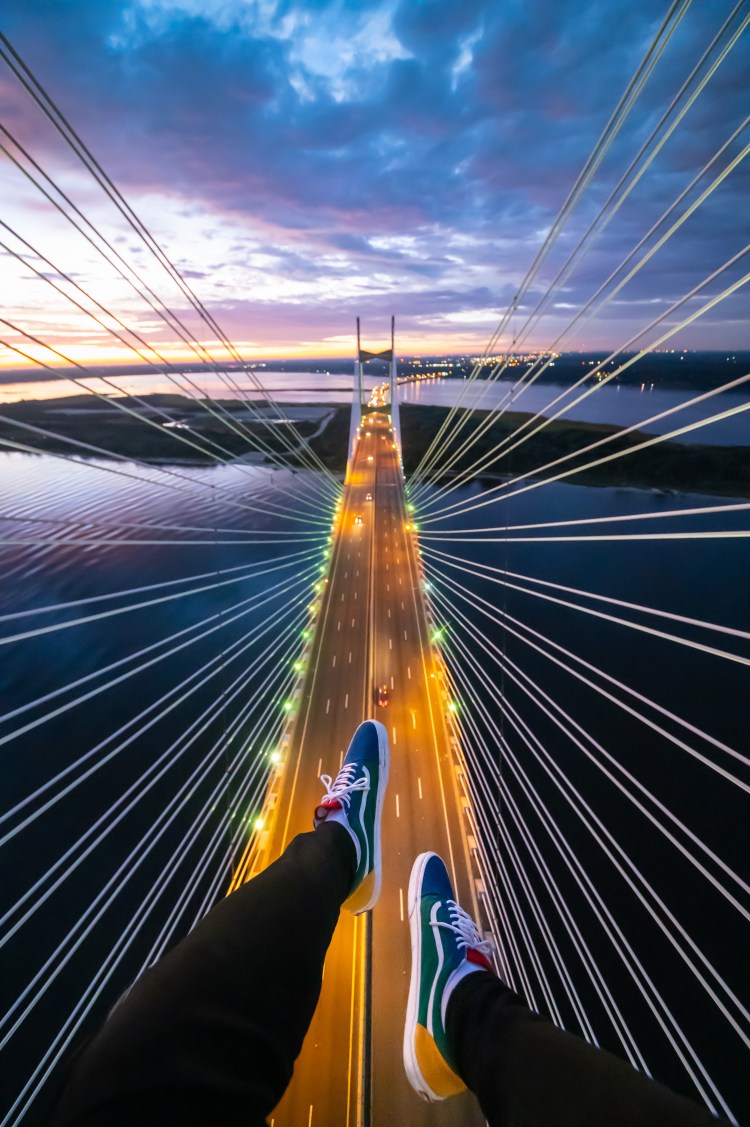 Isaac also notes image 20, which was taken about a week before his life completely changed. The stunning shot is one of the most vibrant in the collection, which is part of what earned it a spot in Isaac’s short list of favorites. But more than that, the shooting’s proximity to his arrest gives it much more significance in retrospect.

“It just was so significant to me, because I didn’t know... I was living my life, my truth and my purpose. I didn’t know that some time in my near future, I would be hunted down and arrested and go through something really awful,” Isaac tells me. The New York Times recently published a piece about Isaac’s unjust incarceration due to his urban exploring. Although these climbs are technically illegal, it is a completely victimless climb. More than that, urban explorers are almost always given mere misdemeanor charges for their exploration. But Isaac, a black man, was pursued to the full extent of the law. He tells me that the Times article helped shine a light on his mistreatment in the hands of the law. “When you’re not visible, like a lot of people in the system are, especially black men, then they can pretty much do whatever they want to you,” Isaac tells me, adding: “With visibility comes accountability.”

This was the context for Image 20. In retrospect, the Isaac tells me that the image “reminds me to take every chance, seize every moment, live out your truth.”

The legal situation over the past few months has impeded Isaac’s ability to pursue new climbs. Nonetheless, he’s still busy with numerous projects, pouring over old video and imagery and even writing a book. He’s working on animations with some old footage, in addition to turning the Where My Vans Go series into a book. “Every shot has a story behind it,” he tells me.

Additionally, he’s bringing two fellow photographers into the space: Tom Durante and em.1t. They’ll be showing a collection together at Superchief gallery on September 9th, featuring a body of work spanning 6 years.

In the spirit of lifting others up, which has become central to NFTs generally and NFT photography specifically, I also wanted to hear some of Isaac’s favorite other names in the space right now. Aside from Tom and em.1t, his collaborators on the gallery, he names a few other street and landscape photographers he’s infatuated with. One of the first he mentions is Monaris’ Collecting Hands, a gorgeous collection of street photography built around the idea:

“This collection is a grounding prompt that no pair of hands share or tell the same story, yet somehow, despite our different experiences in life, we’re able to relate to one another on one common ground: ‘Life.’”