How Omer Qayyum Made His Passion for Design a Reality 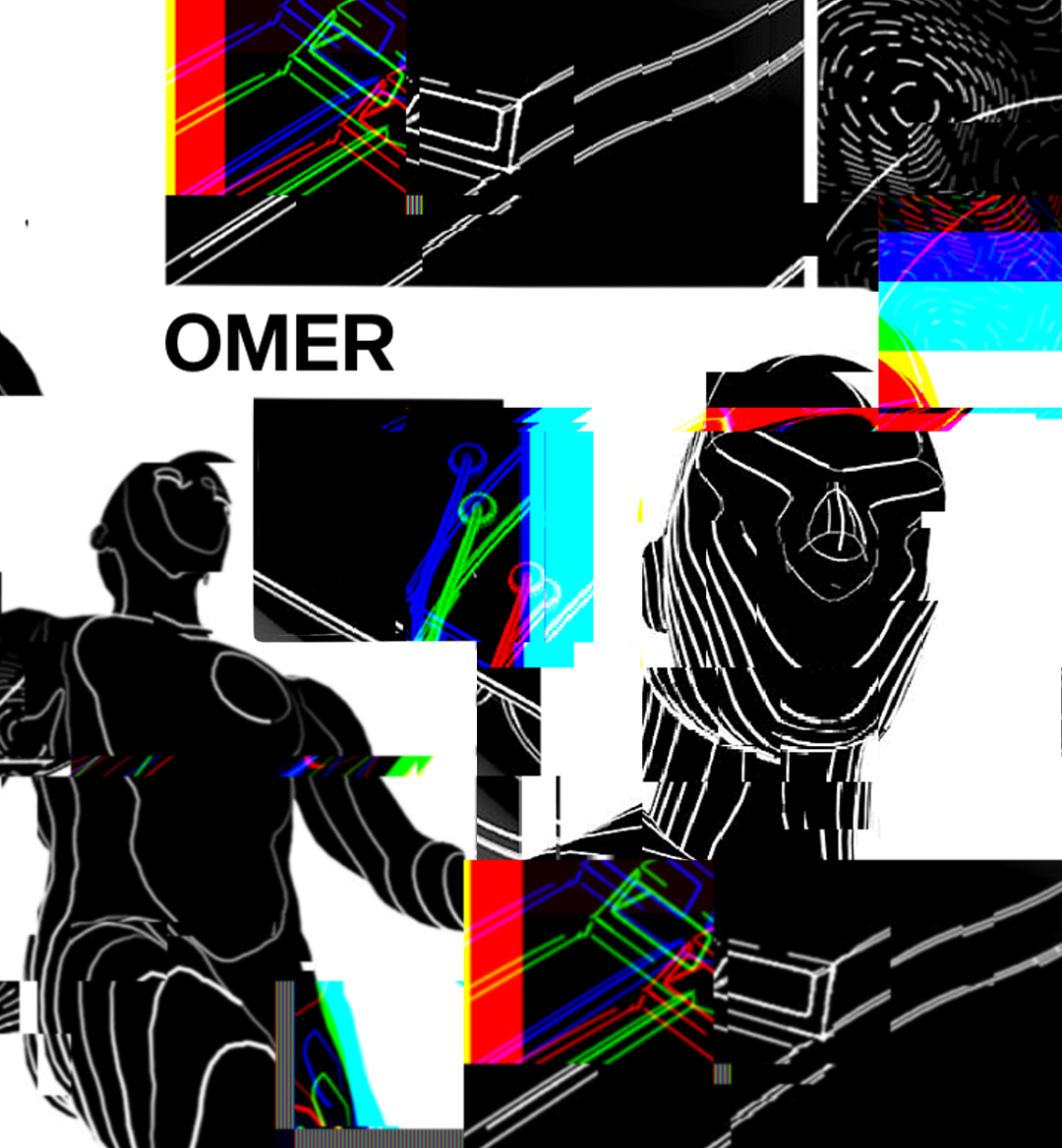 As humans, we all have things that we love to do. Whether you enjoy writing, creating, playing a sport, or perhaps an instrument, we all dream of making our passion our reality. However, it's never as easy as we hope for it to be, and I believe that's because, without the struggle, we would never seek success.

That's why we sat down with Omer to discuss his journey of turning his love for design into his reality. But that's not to say it came easy.

Who is Omer Qayyum?

WHAT!? Thanks to @MattDionis for pointing out that I'm on the front page of @opensea !!! pic.twitter.com/aHcLtBx4Ym

In 2016, Omer worked as the Creative Director and Project Lead for a division of the company called ASB Games. The department worked in many realms such as design, storyboarding, animation, plus additional services connected to the gaming industry.

In 2017, he had the pleasure of working with Tom Hanks to produce his introduction video at the TCT conference in Denver, Colorado, and in 2020, his video, “The Forgotten Farmers”, was nominated for a Webby Award.

Omer's journey: The past, present, and future

Inspired by Saturday morning cartoons, you could always find Omer drawing comic strips, designing characters, or even recreating the characters that he saw on TV. That's why from a young age, he knew that wanted to learn how to animate his illustrations, design logos, and much more.

Monday's render and another work in progress from my upcoming "Meaning within the Static" collection. I'm really loving how these shadows have been making each piece pop. pic.twitter.com/ads7k2q9SZ

The cultural aspect made things more challenging as he is first-generation, with both of his parents being born and raised in Pakistan. They moved to the U.S. for a brighter future and to live out the “American Dream”. This also meant that his idea of pursuing a career in art was nothing short of concerning for them, which led to added pressure for Omer to figure out how to make them proud while still pursuing his passion.

That being said, Omer isn’t a stranger to hardships. After graduating from art school, he didn’t have much lined up in terms of a career around his passion, so to pay the bills he took a job at Macy’s. Omer quickly went from living paycheck to paycheck, to falling behind on rent. That is the moment that he went into “survival mode”.

From then on, Omer put all his belongings into storage and began finding ways to live below his means. He stayed at a friend's apartment for three months but eventually ended up in a hostel for a year where he stayed with six other roommates. He worked various gigs doing freelance work, and also picked up work there at the hostel.

Omer ended up moving back to his parent's house in Texas for a month. At that time, he received a call from an advertising company that offered him an unpaid internship for one month. Omer agreed to take the internship, so he moved back to his friend's place where he called the couch his home for the time being.

The company gave Omer money to buy lunch, but nothing more. So he decided to stretch his money as much as he could, often times buying a dollar slice of pizza so that he could use the rest of the money to afford dinner. Once the internship concluded, they ended up giving him a job as a project manager, but shortly after, he was laid off.

Omer was hopping from one job to the next and was laid off several times. He moved around every year for a decade, up until two years ago, where he has finally found a place to call home.

You don’t ever really lose the survival mode feeling.

Although Omer is living more comfortably now in his own place, he is still so used to moving around that many of his things are still packed away in boxes.

Busy day and an even busier week as we come close to release day. Wishing you all a good morning & a wonderful day! pic.twitter.com/mDKqPDija3

Even though Omer had a steady job working in the corporate world, he still felt that there was something missing. So one day when he got off work, he began creating his own designs using tutorials for 4D cinema. After the first day, he realized the freedom he got from creating is what he had been longing for. So he created his Instagram account and began sharing his work with others.

This was about the time that Omer heard about Beeple’s ‘Everydays’ render. He knew that he couldn’t make a render every day, so he started by making one to two a week. He’d come home after a long day at work and continue to work on his own designs. Except this was different, it didn’t feel like work to Omer because he was doing what he loved to do.

When NFTs started hitting his social feeds in 2021, he realized very quickly that this was the perfect opportunity to take his passion to the next level. It also gave him the push to open up his own studio, which is where he spends most of his time today.

What is OQ Studios?

Omer has continued to create things he loves and share his creations with others using social media. Eventually, others began to take notice and started reaching out to Omer, curious to know what it was he was doing. Today, Omer is investing more time and money into his studio so that he can continue to create the things he loves.

Omer mentions that NFTs have helped him take his work and his passion to the next level because now people want to collect art and display his work on their walls. That’s also where Omer’s new NFT collection, Meaning Within The Static, comes into play.

What is Meaning Within The Static?

MWTS strives for the same goal but focuses more on a single moment versus an extended one. Essentially, it’s an animated loop your eye is constantly seeing the video move. With the MWTS collection, he aims to condense things and capture the meaningful points that stand out to him within a given moment.

When you look at his work, you might notice that there’s a pattern with his collections. Each one has begins with the words ‘Meaning With The’. You’ll also notice that as each new collection appears, more detail is implemented.

Officially bringing my Paris experience to a close. Hands down one of my most proudest moments. Thanks to @brawhaus for sending over the night shot of my artworks displayed at @ep7paris, the style really popped with the environment.
- pic.twitter.com/Gjm63dh3Ly

Works that existed solely in black & white now may include an accent color (that’s a hint for future things to come). As time passes, you’ll see his works grow and feel more cinematic, mimicking the timeline of moments and experiences that he has grown from and gained during the timeline of his life and art career.

His Meaning Within The Static NFT collection drops on March 9th on Opensea and features 40 unique pieces of work.

What about utility for collectors?

Physical prints will play a huge part in my upcoming collection. It's an element that I've wanted to include for awhile now, especially as an unlockable feature.

Meaning Within The Static is releasing on 03/09 and piece number 12 is ready to be minted and framed!

The support Omer has received throughout his journey has allowed him to grow as an artist and business owner. Omer mentioned that it is an incredible feeling to see his work in a collector’s digital gallery and he wanted to take things a step further through unlockable content.

With the MWTS collection, holders of his previous work will receive a physical version of their piece that will be shipped to them. All his collectors will receive a desktop and smartphone wallpaper plus there are additional utilities that he is working on for the future.

What you’re investing in is literally in my growth, and I didn’t stop then so I wouldn’t stop now.

When I asked Omer for his advice to anyone who wishes to make their passion their career, he had some really good advice that I believe everyone needs to hear.

"Hold onto your passion and keep believing in it,” he said. “You aren’t solely defined by just the positive or just the negative moments, but rather a combination of them both.”

At the very least, Omer's inspiring journey is proof that if you have a strong passion for something, you can make it your reality if you are willing to stay consistent and put in the work.