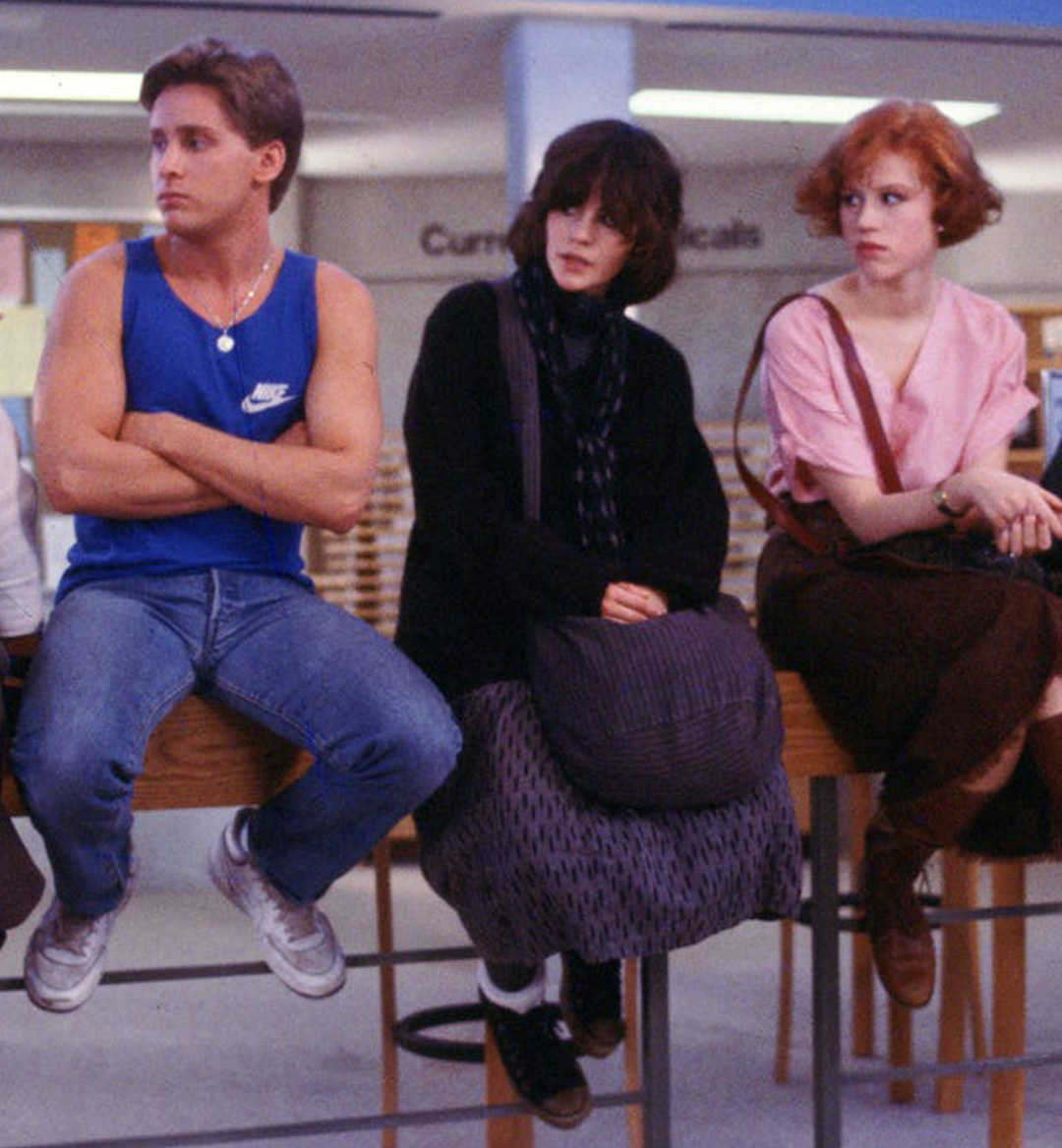 I’ve always been a little jealous that I didn’t grow up in the '80s. It might have been the oversized sweatshirts and leg warmers, Rob Lowe in everything, MTV being the premiere channel for music videos, or those cool transparent telephones. Or, of course, it could be that my parents always made it seem like such a cool decade with classics that we still watch today. With a million different streaming services to choose from, there are endless movies you can watch, but these are the best '80s movies on Netflix to get you started.

Warning: there’s going to be a lot of John Hughes.

Another John Hughes classic (and one of the best '80s movies on Netflix), Matthew Broderick plays an unmotivated high schooler Ferris who skips school one day by playing sick. The Vice-President of his school does not believe him and spends the majority of the movie trying to catch him, which in hindsight, seems like a lot of effort to bust one kid. The movie’s charm comes from the unique breaking of the 4th wall to hear Ferris’ thoughts; it went on to be one of the top-grossing movies of the year.

Al Pacino stars as the iconic Tony Montana, a refugee from Cuba who eventually becomes a major force to be reckoned with as he gains control of the greater drug scene in Miami, Florida. Montana doesn't stop there, however, as he acquires even more power, becoming homicidal and increasingly agitated with his colleagues, which creates major conflicts within his organization and other relationships.

Not only is this one of the best '80s movies on Netflix, but it's one of the greatest films, period.

The film responsible for solidifying Nora Ephron on the rom-com scene, When Harry Met Sally… also rocketed Meg Ryan to major heights in her role as the eponymous Sally opposite of Billy Crystal's Harry. The plot centers around the two characters who drive to New York City together after graduating from college, and though they don't get along very well, their paths cross again later in life, where they test the question of whether or not men and women can just be friends.

Directed by Ridley Scott, Blade Runner takes on the sci-fi genre in a 2019 Los Angeles (one that's much different from the real 2019 of just a few years ago), revolving around a corporation responsible for replicating humans in order to create various colonies in space. Rick Deckard (Harrison Ford) has to fend off a gang of these replicants after they escape from their colony-creating work in space and return to Earth.

With an absolutely stacked cast, Steel Magnolias seems like it's just going to be a lighthearted, solid good time about a group of older women, though things quickly turn dire when one of their daughters, Shelby (Julia Roberts) becomes drastically ill. In the wake of that, however, the group of friends rallies around M'Lynn Eatenton (Sally Field), getting to the core of what friendship is all about.

Patrick Swayze takes on the role of bar bouncer, James Dalton, who aims to shield the roadside bar where he works from the dealings of Brad Wesley, a businessman who has his grip over the Missouri town where it's located. As the two don't get along very well, Wesley sets his sights on the bar and aims to do everything he can to take it down.

Think of this movie as the original 13 Going on 30. When 12-year-old Josh wishes that he was no longer a kid and finally “big,” he wakes the next day to find his wish has come true.  He gets an apartment, finds success at his job, and even holds down a romance before he finds himself longing to be a kid again. As someone who has been a full-fledged adult for a while, let me say: I feel you, Tom Hanks. I feel you.

I sing “(I’ve Had) The Time of My Life” at least once a week, and this movie is the reason.  Taking place in a resort in the Catskills, young Frances “Baby” Houseman, and her family vacation during the summer as she learns how to dance by a super cool Patrick Swayze.

This movie is the classic of all classics, and while the budget was only $5 million, it made a cool $215 million at the box office. It also led to a prequel and a made-for-TV remake in 2017 (which my boyfriend was in, so check it out), but the original is such a joy and full of lines we're still quoting in 2022.

Often referred to as the blueprint for the coming-of-age movie, John Hughes’ The Breakfast Club introduced the world to the Brat Pack, a group of good-looking young actors who played in a series of similar movies in the ’80s. Emilio Estevez, Judd Nelson, Molly Ringwald, Anthony Michael Hall, and Ally Sheedy comprised the core of the group, with The Breakfast Club being one of two movies these five actors starred in together.

The movie takes course over an afternoon when five very different students are forced to spend Saturday detention together. As they share stories and bond, they discover that “a brain, an athlete, a basket case, a princess, and a criminal” have more in common than they initially thought.

When rich kid Joel’s parents go away for the weekend, he treats himself to a prostitute who ends up robbing him. Hilarity ensues! Okay, maybe not hilarity but shenanigans that involve a pimp, a Porsche that sinks into a lake, Tom Cruise turning his parents’ home into a brothel, and displays of white privilege at every turn! Risky Business is considered one of the best films of the 80s and holds a 92% rating on Rotten Tomatoes.

A fantastical cult favorite, Beetlejuice’s cast is full of stars you’ll recognize... but 33 years younger. Alec Baldwin (you might know him as Former Spanish Person Hilaria Baldin’s husband) and Geena Davis play a deceased couple who find themselves haunting their house after the Deetz family (Winona Ryder, Jeffrey Jones, and Catherine O’Hara) move in. In an attempt to get them out, they summon Beetlejuice, a sneaky poltergeist who has a different idea of what help looks like.

Arguably the quintessential kids-going-on-a-quest movie, this Stephen King film revolves around four young boys looking for the body of a recently deceased child somewhere in town. Yeah, that’s kind of a gruesome plot, but what else could you expect from Stephen King? What makes this movie unique is how it goes one step further into each of the boys' traumas, grappling with some pretty heavy adult stuff, but always comes back to the strong friendship that carries the story.

In another classic starring a different configuration of the Brat Pack (take out Ringwald and Hall, add dreamboat Rob Lowe, Demi Moore, Andrew McCarthy, and Mare Winningham), we meet a  group of recent college grads figuring out adulthood. Yeah, this is a pretty common trope, but did I mention a super attractive Rob Lowe is in it?

My parents love St.Elmo’s Fire. Ask your parents—they probably love it, too.

Sometimes you’ve got this feeling that time’s just been holding you down. You’ll hit the ceiling or else you’ll tear up this town. Now you gotta cut loose.

No movie from the 80s used music quite as efficiently as Footloose.  Kenny Loggin’s “Footloose”, Deniece William’s “Let’s Hear It For the Boy”, Foreign’s “Waiting for a Girl Like You”, Moving Picture’s “Never” and Mike Reno and Ann Wilson’s “Almost Paradise” (you know the song from Bachelor in Paradise, and I’m embarrassed for you.)

The premise: Ren, a teenager from the big city, moves to a small town where dancing and rock music have been banned. Watch to see how he turns things around.

Who's in It: Eddie Murphy

My dad hates watching movies with me that include any raunchy behavior or language. He still views me as his little girl, and I can feel his body cringe when there’s even something SLIGHTLY uncomfortable on the screen. However, my father made an exception for Eddie Murphy’s Raw because it’s that good. This 1987 blockbuster shows Murphy at his best, nailing impression after impression and securing his place in comedy history.

For all of those reasons, this special is easily one of the best '80s movies on Netflix.

A whole generation was reintroduced to Fast Times at Ridgemont High last year when Dane Cook pulled together an impressive amount of stars to do a table reading for COVID relief efforts. The actual movie is a coming-of-age (I know, I know, another one) film about a group of high schoolers in Southern California and is probably best remembered for Sean Penn’s performance.

Heathers, like many other movies of this era, is about high schoolers and their daily lives, but that’s where the similarities end. Intended to be the antithesis of the popular John Hughes coming-of-age films, this movie centers around a popular clique of girls who attend a school where people start dying.

One of the most iconic movies to shed light on Greek life in historically black colleges, Spike Lee based some of this movie on his own collegiate days at Morehouse University. Featuring a very young Lawrence Fishburne and Tisha Campbell, School Daze grappled with race, colorism, college politics, beauty standards, and identity (to name a few.) Even in 2022, this movie doesn’t feel dated.

The movie that launched a thousand sequels (okay, it was just a few) is one of those sweet and warm films that you watch years later, and somehow, it still manages to hold up. When an inventor shrinks his kids, as well as the neighbor’s kids, they have to navigate the much larger world in hopes of getting back to normal size.

Something about the ’80s bred groups of misfit kids going on adventures. The children in The Goonies find themselves in possession of an old map that leads to a treasure hunt, complete with pirates, caves, monsters, and skeletons.

If you like fairy tales (especially modern takes), The Princess Bride will quickly be a favorite. The story is told through the narrative stylings of a grandfather telling his grandson a bedtime story; the bedtime story revolves around a farmhand and the hurdles he must go through to be with the one he loves.

Regarded by many as the greatest Star Wars film ever created, The Empire Strikes Back barely needs an introduction. Though the Death Star was previously destroyed, all is still not well in the galaxy, as the Empire begins with an assault on the Rebel base located on Hoth. Things pick up from there, ultimately leading to the first face-off between Luke Skywalker and Darth Vader.

The Indiana Jones film that started it all, Raiders of the Lost Ark, firmly established the character and displayed just how much star power Harrison Ford had during this time period. The first installment introduces us to Indiana Jones, an archaeologist who travels across the world to locate the Ark of the Covenant.

The long-awaited sequel to the extremely successful Alien, Aliens focuses on Ellen Ripley (Sigourney Weaver) once again, who's finally rescued after escaping the events of the original movie. After recounting everything that went down, her team sends her back with a different crew on a new expedition to investigate the area where the alien eggs were originally found.

Directed by Tim Burton, this take on Batman toes the line between campy and serious, as Nicholson's take on the Joker creates a perfect dichotomy between Keaton's more stern portrayal of the character. The film mainly focuses on the two arch-nemeses as they duke it out through various situations and conflicts in Gotham City.

Watch now on HBO Max
Slide 1 of 3
Did you like this article?