Athletes Who Served in the Military and Their Rookie Cards 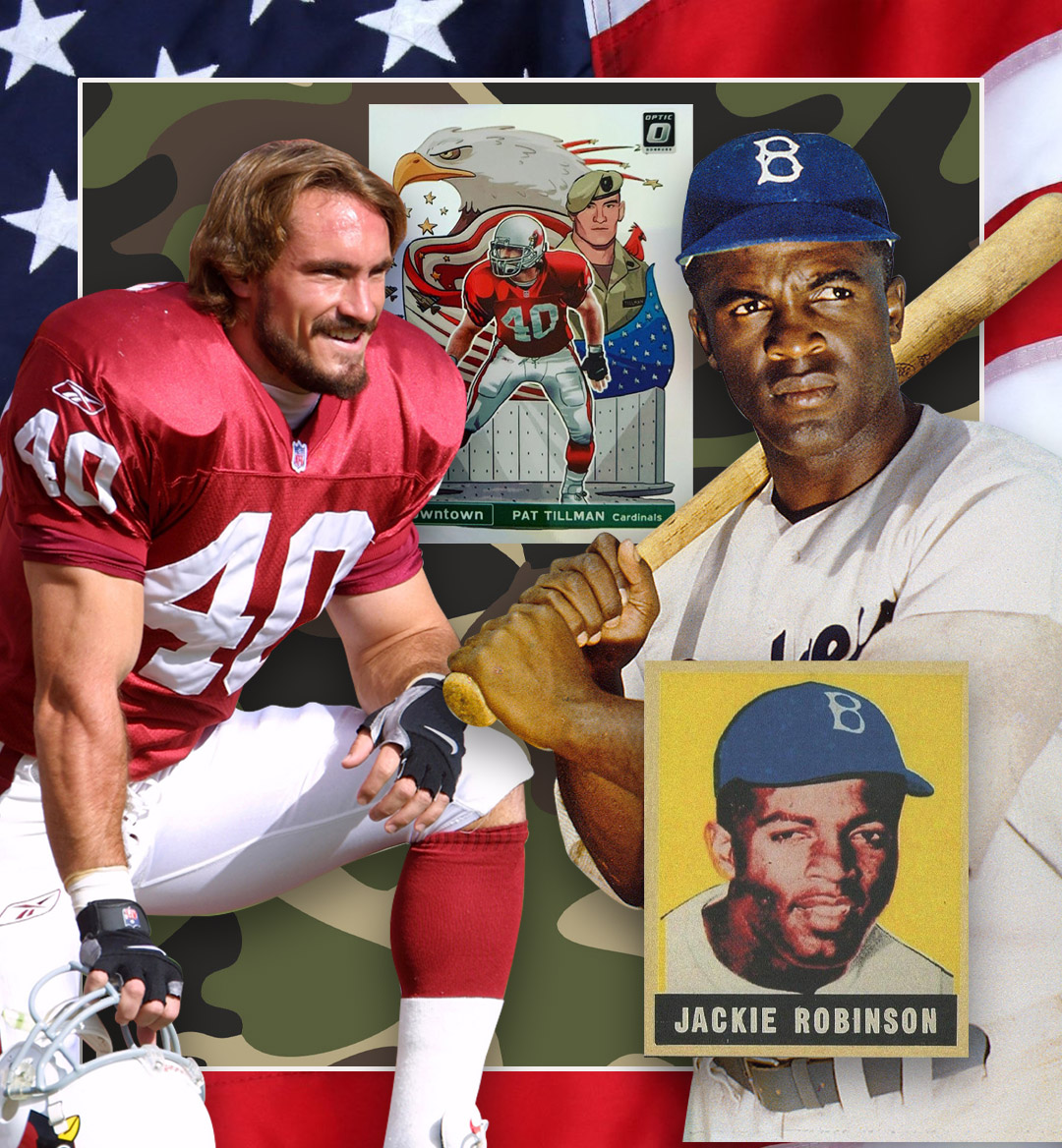 As another Memorial Day weekend quickly approaches, it becomes very apparent that summer is here.  Pool parties, barbecues, and many rounds of golf can be expected in the next few days. Before I talk about some athletes who served in the military, it is important to recognize the real purpose of this weekend: to honor those who have sacrificed their lives for the safety of this country.

To show appreciation for these athletes, we decided to put a new twist on our discussions about the trading card industry.  So, today we will be showcasing the rookie cards of ten athletes who served in the United States Armed Forces.  We will also provide some information on each player’s athletic and military career, as many of the names on this list are all-time greats in their respective sports.

Let’s jump right into it! Here is my list of ten athletes who served in the military and a look at their best rookie cards: 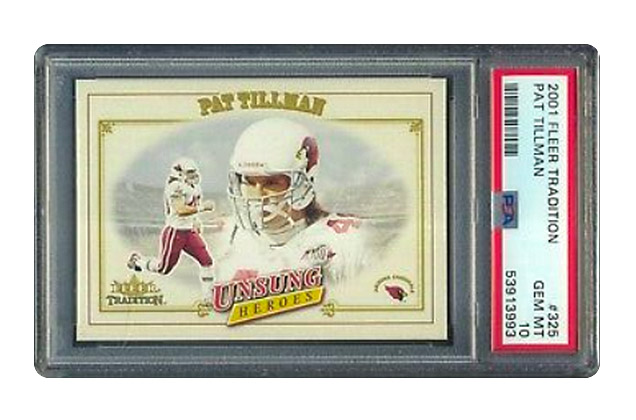 A seventh-round pick, Tillman’s fierce playstyle and ball-hawking abilities quickly made him one of the most promising young safeties in the NFL.  After the 2000 season with the Cards, Tillman had racked up 155 tackles and an abundance of disruptive hits.

When you think of athletes who served in the military, Tillman is likely the first who comes to mind. Following the September 11 attacks, the Arizona State alum decided to leave behind the bright lights of pro football and made the brave decision to enlist in the Army.  He was involved with several battalions as an Army Ranger here in the U.S. before being deployed in Iraq and Afghanistan.  Unfortunately,  Tillman died from a friendly fire incident in April 2004.  His heroic efforts during his time with the military earned him a posthumous Silver Star and Purple Heart.

Considering he was such an underdog story coming out of college, Tillman didn’t actually have any rookie cards until the 2001 season.  He has a card in both the Upper Deck MVP and Fleer Tradition sets, but we chose to go with the latter due to its immense rarity when graded (POP 10).  These won’t break the bank if you’re an avid Tillman collector, as they only run about $200-300 on eBay. 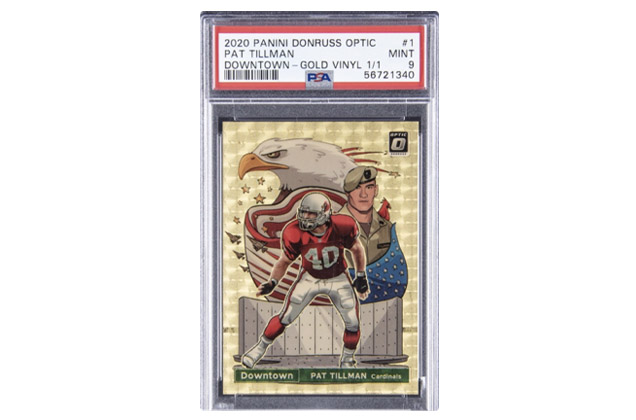 Of course, we would be remiss if we didn’t mention Panini’s Downtown set, which features an extremely patriotic portrayal of Tillman as an Arizona Cardinal.  The gold vinyl 1/1 from this product actually reached a price of over $5,000 at auction, making it the most expensive Pat Tillman card of all time.

Tillman’s heroism and bravery will be remembered this Monday, and the sacrifice he made will not be forgotten any time soon. 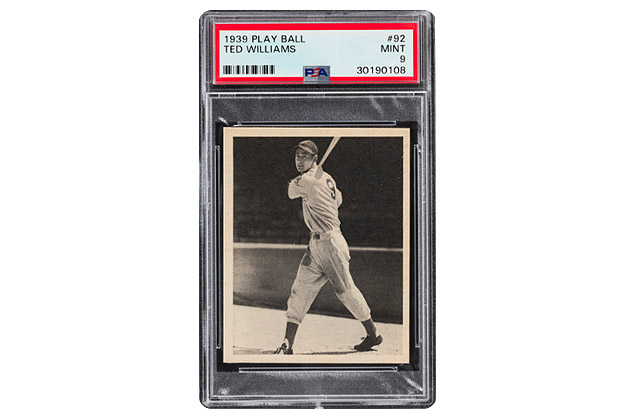 One of the finest to ever play at Fenway,  Ted Williams had an illustrious career so long that he played a game in four different decades.  Arguably the greatest hitter to grace the diamond, Williams posted a career .344 batting average, which is unheard of by modern metrics.  He also amassed over 500 home runs, and his legendary run as both a player and manager yielded a first-ballot Hall of Fame induction.

What many fail to realize about Teddy Ballgame is just how much he cut out of his prime.  The Red Sox legend enlisted in the Navy in 1942, serving until the end of World War II in 1945.  He was then called back into active duty for the Marines in 1952 as the U.S. heightened its involvement in the Korean War.  That’s nearly five seasons that Ted sacrificed for his country,  and he was still able to accumulate one of the greatest careers in MLB history.

Williams’ officially-recognized rookie is from the 1939 Play Ball set, his first year in Boston.  Centering is tough on this card, and there are only 12 PSA 9s and 1 known PSA 10.  The 9 sold for $480,000 back in 2021, making it the most expensive and sought-after Teddy Ballgame card that has ever surfaced. 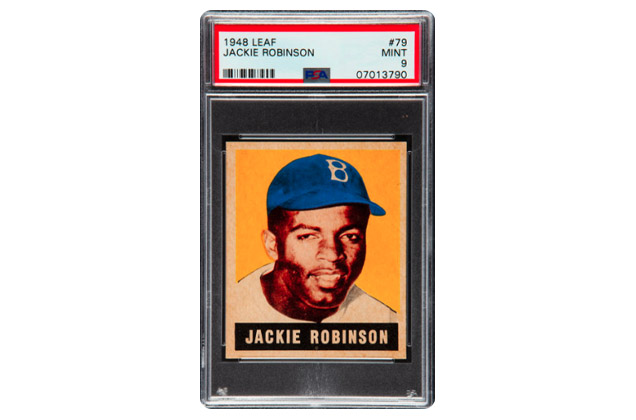 We are stacking legends on this list.  Jackie may be best known for breaking the baseball color barrier in 1947, but he was also a 2nd Lieutenant in the Army during WWII.  Robinson was actually court-martialed and dismissed from his battalion after refusing to sit in the back of an Army bus.

A paramount advocate of civil rights, Jackie Robinson endured unrelenting prejudice and scrutiny in his military and baseball career.  Nevertheless, he persevered through all of this and ended his playing days as an MVP and World Series champion.  His number, 42, is the only number in baseball history to be permanently retired by all 30 franchises, which will hopefully preserve the iconic status of one of Brooklyn’s finest.

1948 Leaf #79 is considered by most to be his true rookie card. The sharp contrast between the blue Dodger cap and yellow background makes this card pop nearly 75 years later.  It sold for $336,000 in 2018, and seeing as there are no PSA 10s, it would probably bring an exponentially higher auction price in today’s market. 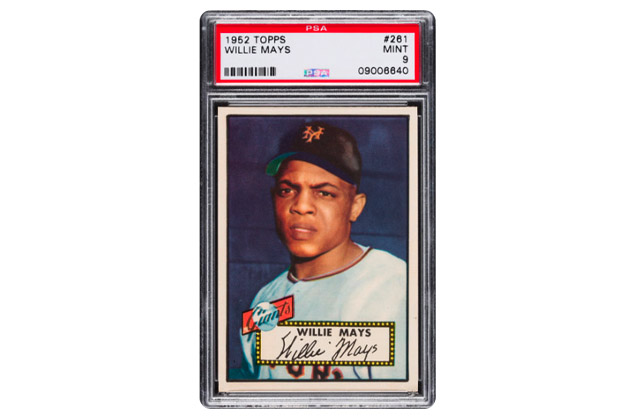 An icon on and off the diamond, Mays is one of the few players in baseball history who could really do it all.  He has been a world champion, Golden Glove winner, MVP, All-Star, home run leader, stolen base leader, and batting champion.  Oh, and he also spent two years of his young career stationed at Fort Eustis, Virginia.  Is there anything Willie Mays can’t do?

Mays’s rookie card debate, much like Mickey Mantle’s, comes down to the 1951 Bowman set and the now-immortalized 1952 Topps set.  While the Bowman may be his first appearance on cardboard, the ‘52 is much more sought after.  This is reflected in a 2016 sale of the Topps PSA 9, which fetched $478,000 at a Heritage auction. Much like the Jackie Robinson we mentioned earlier, one can only speculate what one of these coveted copies would bring in value today. 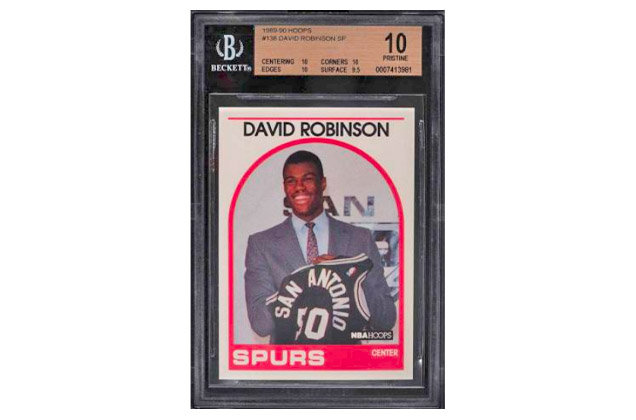 David Robinson was pivotal to the success of those 1990s-2000s San Antonio Spurs team,  and he is undoubtedly one of the best big men in NBA history.  Even still, Robinson served over 2 years of active duty in the Navy before even playing his first professional basketball game.  An alum of the Navy Midshipmen, he garnered the rank of Lieutenant by the end of his service, followed by 14 years of bullying defenders in the paint.

Robinson’s rookie year was at a time of immense overproduction in the hobby, which is both a blessing and a curse for collectors.  Thankfully, his RCs can be acquired fairly inexpensively, but they lack the rarity of every other card on this list. Nevertheless, the San Antonio legend has one rookie that sold for over $3,500 in 2021, which can be attributed to the Beckett 10 Pristine grade that it received.

There's absolutely no chance with a nickname like "The Admiral", Robinson wasn't making our list of athletes who served in the military! 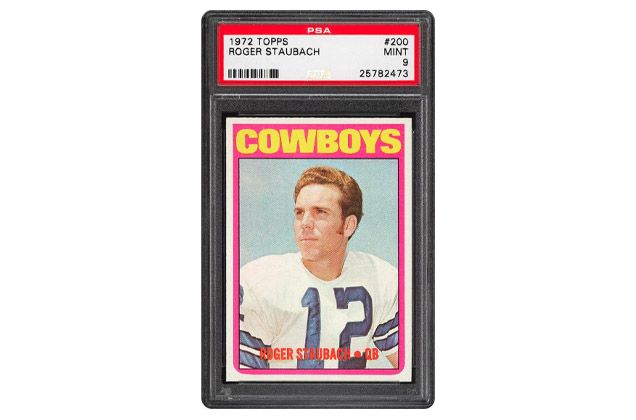 Much like David Robinson in the NBA, Roger Staubach served 2 years in the Navy before ever taking a snap for America’s team.  He was actually stationed in South Vietnam during the war from 1965-1967. This comes after a legendary career for the Navy Midshipmen, where his jersey has since been retired.

Staubach joined the Cowboys in 1969, nearly 5 years after he had been initially drafted.  His rookie card did not come until Topps produced their 1972 set, a design that features vivid colors that hold up well 50 years later.  The card pictured, a PSA 9 copy, is one of fifty existing PSA 9s.  Only two PSA 10s have been verified, but neither have sold at auction in recent years.  However, this copy of the iconic Dallas quarterback sold as high as $15,500  in 2016, and it remains yet another staple of vintage football collectibles. 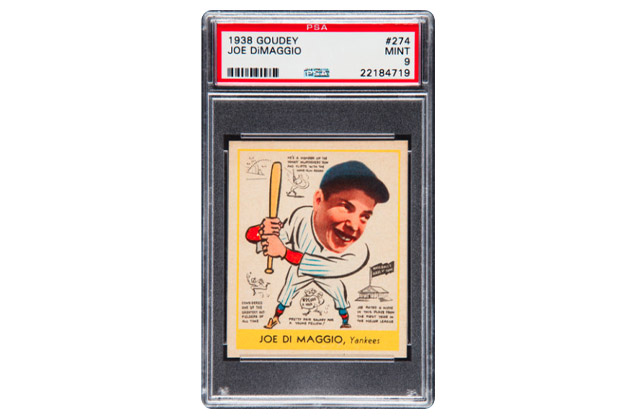 Joe DiMaggio’s name is synonymous with classic Americana.  He is one of the greatest to put in those navy blue pinstripes, married Marilyn Monroe and had a mythical 56-game hit streak that will probably never be touched.  But besides all that, he was also one of the most famous athletes who served in the military, doing so as a sergeant for the AAF during World War II.  During his tenure, he played in many military-organized ballgames and garnered celebrity status, and he never saw active combat.

DiMaggio’s most revered card has to be the 1938 Goudey #274, featuring an almost-cartoonish Joe holding a bat while many different graphics illustrate the background.  It once sold for $288,000 in 2017, and remains a rookie card on most Yankee collectors’ bucket lists. 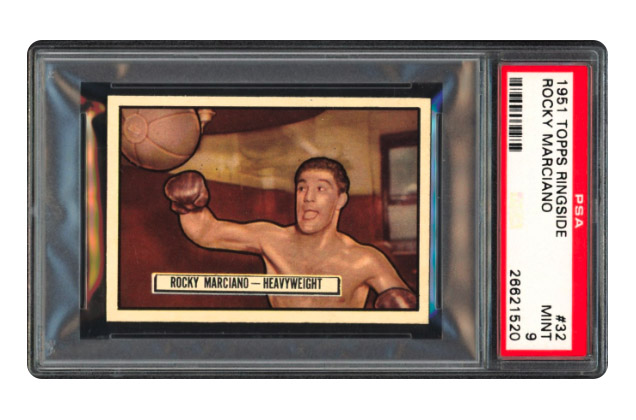 Here is another superstar of the post-war era.  Rocky Marciano is widely regarded as one of the greatest boxers of all time. His 49-0 professional record speaks volumes about his presence in the ring.  But before blossoming into heavyweight champion of the world, “The Brockton Blockbuster” served nearly 3 years in the Army and spent most of his time providing aid to Allied troops in Wales.

Upon returning in 1946, Marciano embarked on a decade-long career that captivated audiences and stirred fear into dozens of opponents.  This crisp 1951 Topps Ringside copy holds up as Rocky’s true RC, and it remains an essential item for hobby enthusiasts of classic boxing. 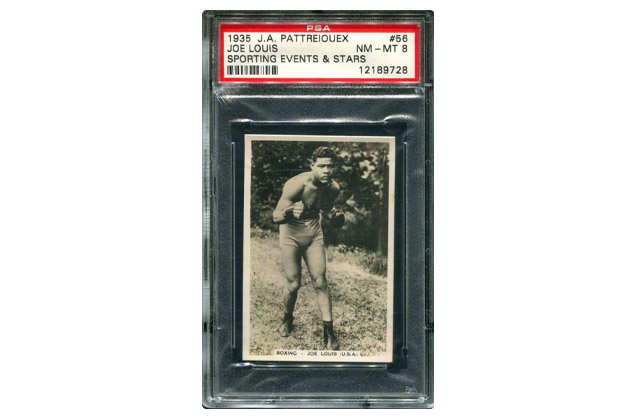 It’s only fitting to have another boxer right behind Marciano - the perfect 1-2 punch.  Joe Louis is another name that will make most fans’ top boxers list.  His 66-3 professional record speaks for itself, but the legendary fighter was also a veteran of World War II.  Unfortunately, he was subjected to racist and bigoted scutiny by many of his supervisors, but he still fought in many charity events for the Navy.

Louis’ fierce spirit and passion for fighting make him so respected and idolized even decades later.  He has another card from the 1948 Leaf Boxing set, but this oddball card from 1935 JA Pattreiouex Sporting Events & Stars takes the cake as the boxer’s true rookie.  Last year, it fetched nearly $9,100 online, making it the most expensive card for one of the most skilled boxers and exemplary men to step into the ring. 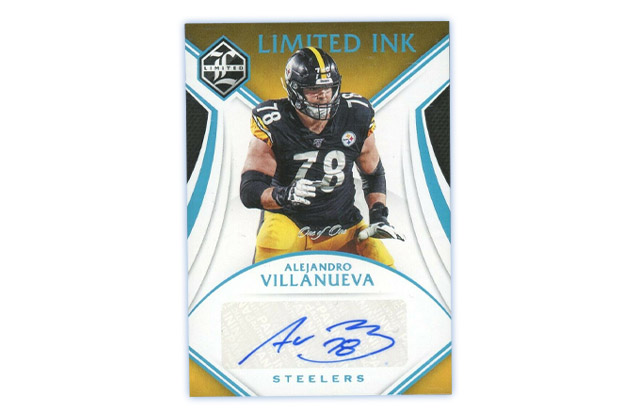 The final feature on this list is not a rookie card, but it showcases a person who has accumulated immense respect across the NFL: Alejandro Villanueva.  Originally a tight end, Villanueva quickly shifted into one of the best left tackles in the AFC.  He has made two Pro Bowls and currently is a starter for the Baltimore Ravens.  And much like others we’ve seen on this list, he spent 5 years as an Army Ranger before making it to the big league.  He was stationed in Afghanistan at one point and earned a Bronze Medal for Valor during that time, making him a role model for fans and a leader in the locker room.

The former Steeler doesn’t have a “true” rookie card, but he has signed autographs in many high-end Panini sets.  The card pictured is a 1/1 from 2019 Panini Limited that sold for $133, and there are many other signatures available of Villanueva on eBay currently.

What do you think about our list of athletes who served in the military? Who would you have liked to see mentioned?