The Best Hits From 2021 Prizm Football 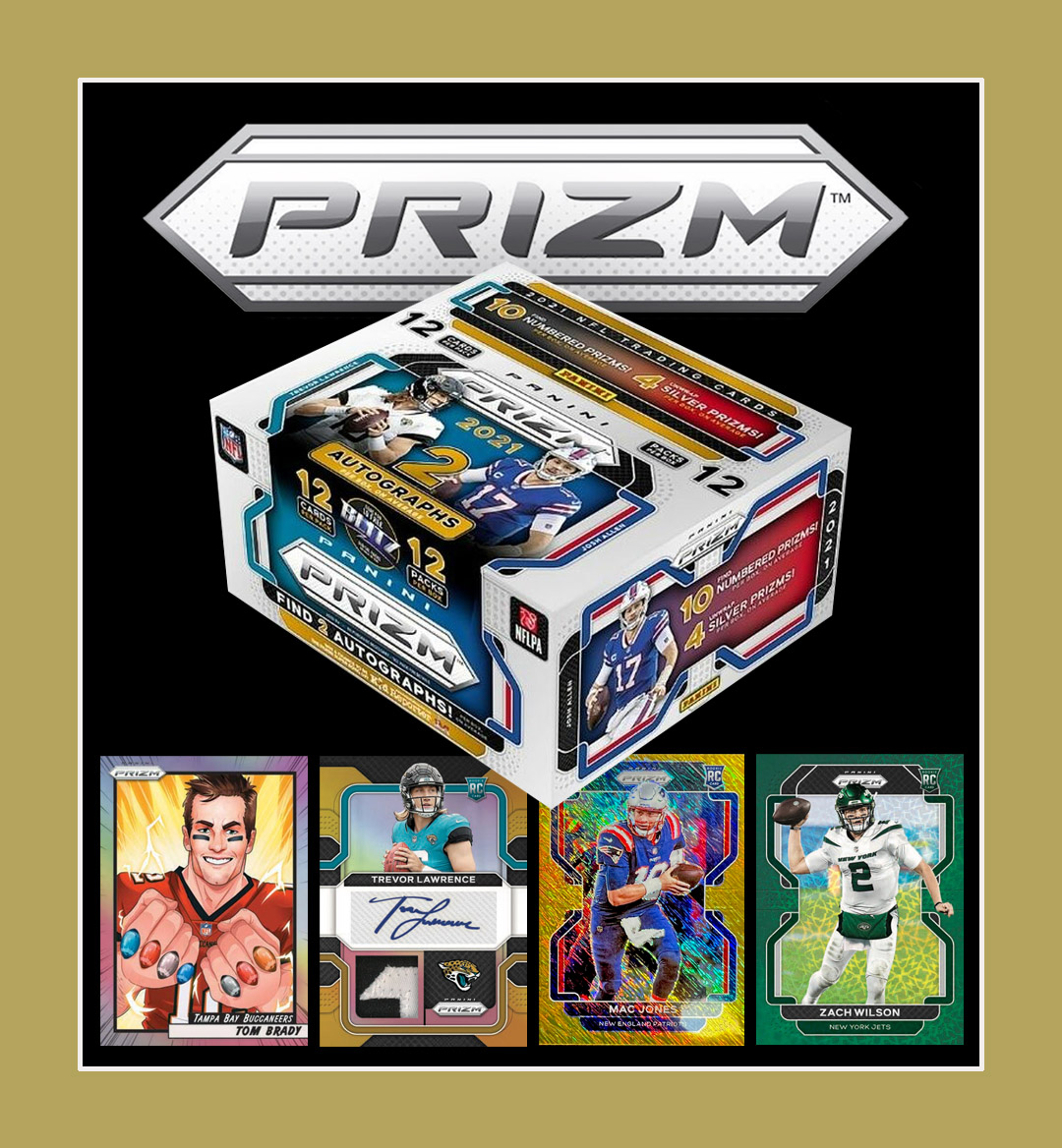 Last week, Panini released one of its flagship products and we have already seen some of the best hits from 2021 Prizm Football. Often heralded as one of the best rookie cards for a modern football player, Prizm constantly grabs the attention of collectors and brings in record sales at auctions.

When this much attention is put on a singular product, there are bound to be some high-dollar cards to surface. Box openings have reached similar energy that they had during the Flawless LeBron James Logoman chase from earlier this year. While no one card is likely to reach the same 7-figure amount as the logoman, there have been some massive hits that deserve the spotlight.

This year’s Prizm is especially noteworthy for two key reasons.  For starters, it features a rookie class with some of the best talents of any draft in the last 20 years.  Players like Ja’Marr Chase, Mac Jones, and Micah Parsons all posted stellar rookie numbers, while others such as Trevor Lawrence, Justin Fields, Trey Lance, and Zach Wilson showed great promise.  Put simply, this class is loaded.

Additionally, Panini added a barrage of case hits and super short-printed (SSP) cards into the mix.  The Manga, Colorblast, and Stained Glass inserts all have generated buzz online in the last week.  And, of course, Prizm is not complete without its Gold, Gold Vinyl, and Black Finite 1/1 parallels, which continue to sell for new highs.

Thousands of boxes have already been opened, so it is nearly impossible to showcase every awe-striking hit out there.  For today, we have curated 8 cards that best epitomize the allure of Prizm, but there are sure to be new cards that will deserve a spot on this list in the future.

So let’s get right into it! Here are the best hits from 2021 Prizm Football so far: 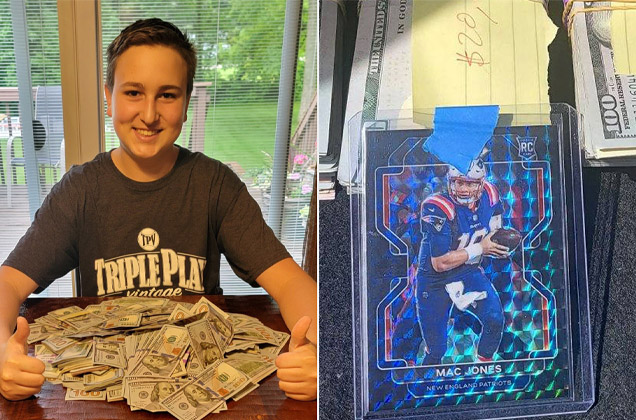 Here it is, the mac-daddy of them all.  The list of the best hits from 2021 Prizm Football has to start here. One thing that constantly unites the hobby is the stories behind these mythical cards we see online.  This one is no exception.

This gem was pulled by a 13-year-old named Johnny Stone (@stones_sports_cardz) and immediately sold for $100,000 the next day.  And if you haven’t seen his reaction, we highly recommend it.  A remarkable card with life-changing consequences, Johnny’s pull has already been covered by local and national media alike.  Not a bad start to the summer for an 8th grader if you ask us.

The question remains: will this card hold its value?  During his rookie campaign, Mac Jones has received unrelenting comparisons to former Pats QB Tom Brady.  But the circumstances are entirely different, and Mac has some tremendous cleats to fill to be put in the same conversation as Brady.  Nevertheless, hobbyists have pinned Jones as THE player to hit in 2021 football breaks, so his market has had some big sales since he was drafted last year. 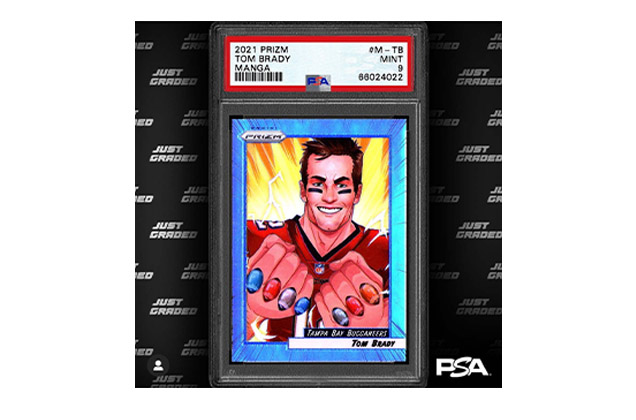 Paying homage to the Japanese art form of the same name, the Manga insert quickly caught the attention of football collectors.  And some early prices of this Tom Brady case hit may make it the chase card to have in the 10-card set.  The picture above features the first PSA graded copy, which was posted to PSA’s official Instagram earlier this week.  Although it didn’t reach that perfect 10 grade, it will be interesting to see where this beauty ends up selling.

Considering Tom Brady has played that villain role for most of his career, this insert is an extremely fitting depiction of the GOAT.  We can see Brady’s seven Super Bowl rings, which almost look like Thanos’s infinity stones from the Avengers franchise.  And with Brady set to return this fall, Panini may end up having to add another ring for next year’s design. 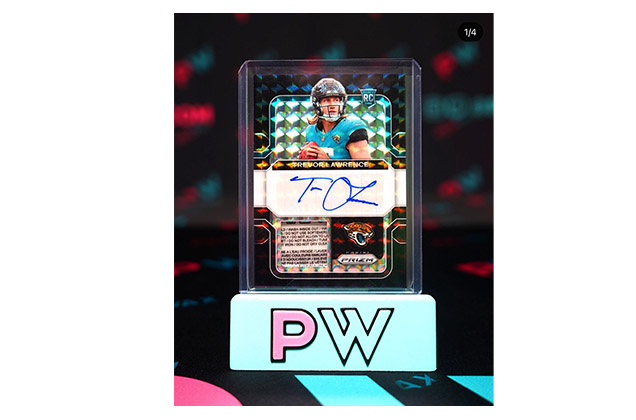 Here is the first appearance on the list from 2021’s top draft pick, and it does not disappoint.  This Trevor Lawrence Black Finite Rookie Patch Autograph is both a case hit and a 1/1, and it is a stunner.  It was pulled this week by PullWax, and it contains a laundry tag patch and a crisp auto.  Lawrence’s NFL Shield 1/1 RPA from Immaculate sold for $91,000 a few weeks back, so we will see if a card of this caliber can reach a price in that range.

Plagued by off-field drama and inadequate coaching, TLaw’s rookie season was certainly not the one he was hoping for.  Fortunately, the Jags were able to reload and add new pieces to their offensive arsenal.  And with the return of his former Clemson teammate Travis Etienne, #16 is looking to make waves in the AFC South this fall. 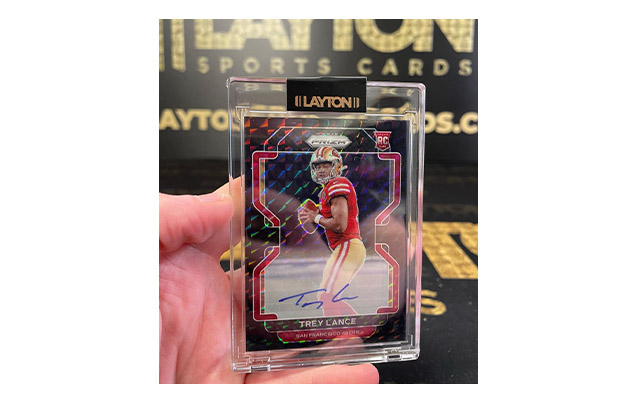 Another top rookie QB, this 1/1 autograph of Trey Lance was hit just a few days ago by Layton Sports Cards.  Considering that Lance has yet to play, we could be looking at a six-figure card if he's the goods.

The gold vinyl auto /5 had an early sale of $24,000 online, so only time will tell where this one will end up. Lance’s dual-threat abilities in the backfield make this card even more exciting. It makes us wish that football season was here already.  If the Niners are able to keep superstar receiver Deebo Samuel on the roster, then we could be looking at a great duo in the NFC for years to come. 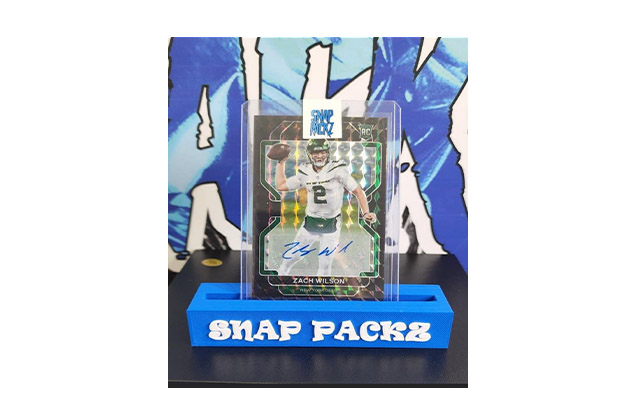 And here we have a beautiful 1/1 auto from New York’s top draft pick in 2021, Zach Wilson.  Snap Packz, a Facebook breaking group, pulled this monster card just a few nights back, marking yet another Black Finite Prizm of a rookie quarterback.  And just like Lance, this is a guy with tremendous upside and a passionate fanbase.

Seeing it is a 1/1, there is no real way to put a definite value on this one.  Regardless, it is sure to bring a nice payday for the new owner if they choose to sell it.  We even know a few of CardTalk’s finest that wish they had hit this massive pull.

The Jets open up their season against the Ravens, and Wilson will get another shot to prove he’s the future. 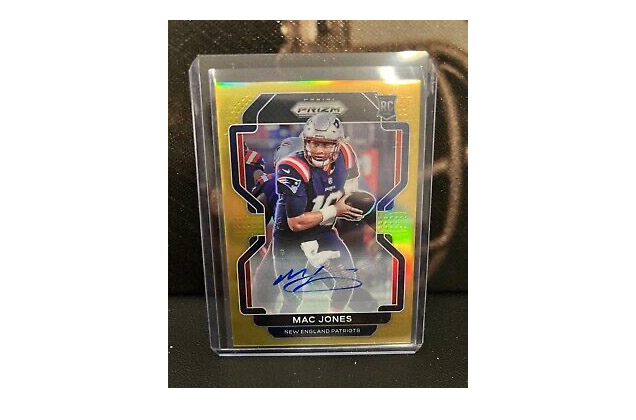 This list needs a little more mac-tion.  Not only have we seen the 1/1 pulled, but this gold autograph appeared on eBay just days ago.  Its selling price is $18,000 according to CardLadder, which is around a fifth of the 1/1 we mentioned earlier.

Looking at this card makes us wonder: is this the next Brady Contenders or the next Matt Cassel rookie auto?  The hype is building for Mac, and a competitive AFC East will make Jones’ path to glory anything but easy.  Only time will tell if this guy has what it takes to be one of the greatest to lace them up in Foxborough. 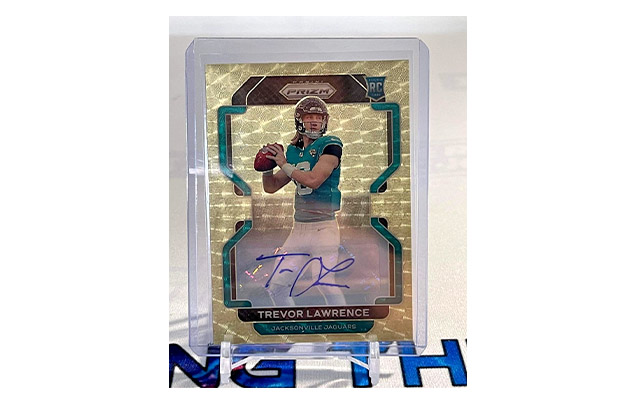 Going in to the 2021 NFL Draft, Trevor Lawrence was thought of as by far the top prospect available... and this card would likely be #1 on the list of best hits from 2021 Prizm Football if the product release was not delayed.

This stunner, pulled by BTC Breaks, will probably sell around the same price as a new Tesla. But with only five of these in existence, it starts to make sense.

With Flawless and other high-end products still slated to release later this summer, it will be interesting to see how many Trevor Lawrence cards that are better than this one.  Because truthfully, there aren’t that many, and you could probably count them on a handful.  Congratulations to the new owner on what appears to be a monster hit! 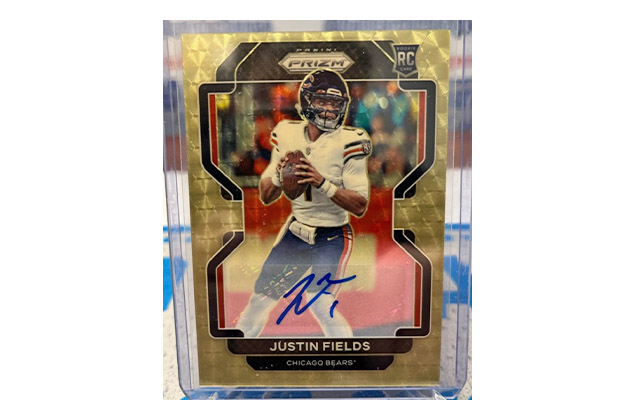 Here is our first appearance from Chi-Town’s newest star quarterback. Fields has remained a redemption in many 2021 football products. This means his autographs get mailed to the customer at a later date.  So to see such a massive card feature a signature of the Bears rookie makes it even more desirable.

After a head coaching change, the former Buckeye is surely looking to make improvements from year one.  Fortunately for him, he has all the gifts and abilities to make that happen. 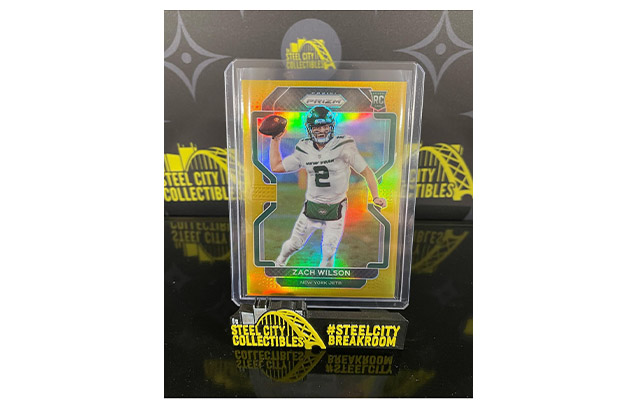 Last but not least, we have a Gold Prizm of Zach Wilson.  The former BYU Cougar showed promise under center last year, but the Jets only managed a 4-13 record.  Nevertheless, many collectors saw Wilson as a great prospect at the quarterback position, and some of his card prices reflect that.

This card, which is numbered to 10, was pulled recently by Steel City Collectibles.  A different Gold Prizm had a sale of over $13,000 on eBay, so a high-graded copy is sure to bring a good premium.  With many off-season additions and an improved defense, we will see shortly if believers in Wilson are geniuses for buying his rare cards now.

Show Us Your Big Prizm Hits!