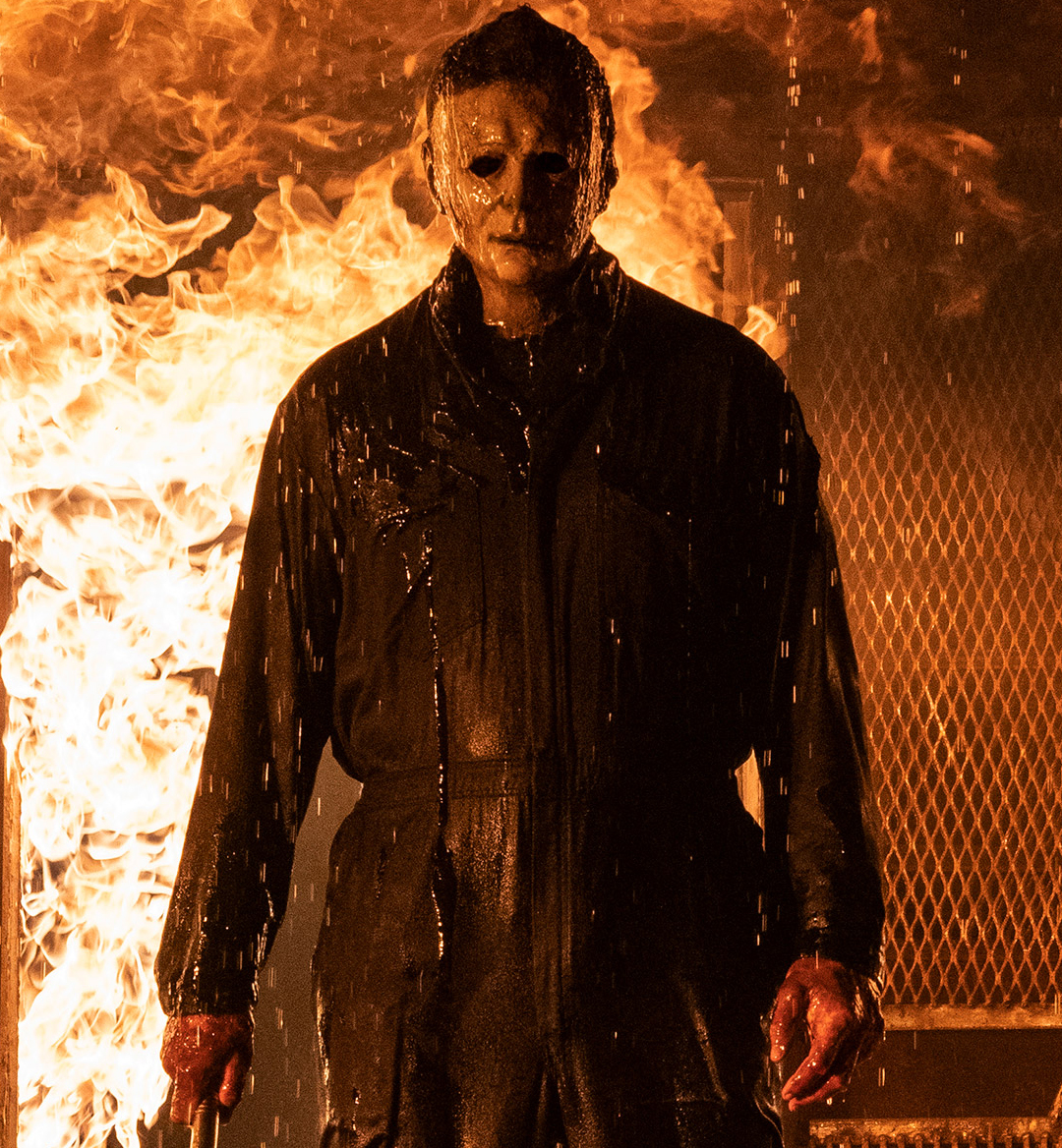 Depending on who you're talking to, Halloween isn't quite complete without a certain thing. For some, it's that first pumpkin spice latte of the season, whereas for others, it's the fact that they get to hate on that same pumpkin spice latte for a good month. But for the hardcore fans, there's a good chance that it's simply the movie, Halloween, or one of the other many classic slashers from the past 50 years.

In her film debut, Jamie Lee Curtis quickly established herself on the horror scene with her role as Laurie Strode in one of the most well-known slasher movies of all time—Halloween. The film follows the now-iconic villain, Michael Myers, as he searches for babysitters to kill on Halloween.

Even if you’ve never seen Psycho, there’s a good chance that you’ve seen its iconic shower scene in some sort of iteration in the years since the movie was first released. Hitchcock's film—based on the novel of the same name—centers around Norman Bates, the owner of the Bates Motel, and Marion Crane, who stops by one night.

Before there was Chuckie on Rugrats, there was Chucky the insane, serial-killer doll from Child’s Play. When pre-doll, human Chucky is killed by a police officer, he performs voodoo to reincarnate as a popular doll to take revenge on his enemies. Given that Chucky was also a serial killer before he was killed, this ends up including more than just his enemies.

Written and directed by Wes Craven, A Nightmare on Elm Street is more of a supernatural slasher, as the villain, Freddy Krueger, claims his victims in their dreams. Johnny Depp also makes his film debut, playing the role of Glen Lantz.

Set at a high school, Scream is similar to Halloween in that the main antagonist is after teenagers, which makes sense given that the screenplay was greatly influenced by both the horror movies that came before it, as well as the real-life story of the Gainesville Ripper. Its masked antagonist, Ghostface, has become a well-known villain over the years, with its mask never going out of style on Halloween.

In the first of what would become 12 movies, Friday the 13th follows the hockey-masked Jason Voorhees at Camp Crystal Lake, a summer camp, where he goes after a group of camp counselors. In the years prior to this, many people have been stalked, killed, and drowned; despite this, teenagers keep coming back—and so does Jason.

Happy Death Day is what happens when the concept of Groundhog Day meets a classic slasher film. Even though this movie looked slightly corny judging by its commercials, it was received fairly well with its time loop concept. In the film, Tree, a student at college, is killed on her birthday, but when she wakes up, she realizes it's the previous day. Given this knowledge, she uses each looped day to figure out who her murderer is.

Though it was filmed on a very limited budget, The Texaschain Saw Massacre was at the forefront of the slasher genre with its plot and infamous villain, Leatherface. The story involves a group of teenagers who drive to a farmhouse and end up encountering a family of cannibals, including one who wears a mask out of human skin—Leatherface. The film has seen tons of iterations in the years following and many have credited it with defining the slasher movie genre as a whole.

Black Christmas is another classic slasher that has been remade a few times, one in 2006 and another in 2019. In this first film, threatening and mysterious calls are made to a sorority house's Christmas party, but only one of the girls is concerned. However, when the calls don't stop and victims start surfacing, it becomes clear that the threats are serious and that the killer is closer than they realize.

This slasher film borders on a supernatural theme as the plot is based on an urban legend about the power of saying the name, "Candyman." The legend goes that if you say "Candyman" five times while facing a mirror, it will summon him to kill whoever said his name. The main character, Helen, expresses her disbelief in the myth, and because of that, the Candyman takes it as an opportunity to prove her wrong.

Around the time Strait-Jacket was released, Joan Crawford was in a bit of a slump in the years following What Ever Happened to Baby Jane?, which had been a huge hit. As a way to get herself on the map again, Crawford took this film, and while the movie didn’t do well critically, she was praised for her performance in the main role of Lucy Harbin. The film is set 20 years after Harbin killed her husband and his mistress, following her subsequent stint in a psychiatric facility.

Jigsaw, the antagonist of the film, has become a quick classic in the years since Saw was first released in 2004; in less than 20 years, the franchise has had seven sequels, each in some way revolving around Jigsaw and his tests. After surviving a suicide attempt, he decides to dedicate his life to get others to have the same newfound, positive feeling about life.

The Cabin in the Woods is definitely a freaky take on the modern slasher movie. Whereas previous horror movies had one main antagonist acting alone, this film features an engineered situation, with everything at the house controlled remotely. The lab engineers who are overseeing the house use different methods to control the group of college students who are staying at the cabin, including drugging them to cloud judgment, as well as sending in antagonists.

An Italian horror movie, Deep Red combines a few themes of film into one, including mysteries, thrillers, crime, and slashers. It fits into the classic genre of Italian Giallo horror films, turning out to be one of the most successful films of the genre in the years since its release. The movie centers around a person only seen in silhouette who carries out several murders, and Marcus—one of the main characters—who attempts to solve the case.

Octavia Spencer does much of the heavy lifting in this light slasher, and because it has received a bit of the meme treatment since its release, Ma has quickly become a horror favorite. When a group of teenagers asks Spencer's character, "Ma," to buy them liquor, she starts to develop an odd relationship with the group. She eventually invites them over to party in her basement, but when Ma starts to become too much of a part of their lives, things go awry.

Jamie Lee Curtis reprises her role as Laurie Strode in this installment of Halloween, and even though there have been 10 iterations prior, this is the technical sequel to the original film. Taking place 40 years after the first movie, Michael Myers escapes from the institution he had been locked in and makes his way back to town. During this time, Strode has remained worried about Myers and has become a slight agoraphobe as a result of her fear.

In staying with one of the classic slasher themes of having the plot coincide with a holiday, My Bloody Valentine takes place at an impromptu Valentine's Day party after the town's planned dance is canceled because of a murder. Because this is a slasher movie, the murders don't just stop because the dance is canceled.

Following the original film’s success, this sequel utilizes the same time loop as Happy Death Day as well as a good portion of the original cast. In this iteration, the film focuses on Carter's roommate, Ryan, who finds himself in the same time loop as Tree did in the first movie. A third installment is even on the way, titled Happy Death Day To Us.

The Prowler's cult following over the years has established the film's standing on the slasher movie scene, even though it wasn't received that well on a critical level. The antagonist of this movie is a World War II veteran—an unlikely murderer—who decides to stalk college students on the anniversary of his wife's death.

In her film debut, Brooke Shields plays the role of Karen Spages, who—on the day of her First Communion—is murdered at church by someone wearing a mask. Prior to her murder, Karen's older sister, Alice, had been shown with a similar mask to that of the one used in the killing of her sister.

The House on Sorority Row follows a more classical slasher theme with a house of sorority sisters being tormented immediately following their graduation from college. After a prank on their house mother ends poorly, things around the house start to go downhill.

I Know What You Did Last Summer has a stacked starring cast, with Sarah Michelle Gellar, Jennifer Love Hewitt, Freddie Prinze Jr., and Ryan Philippe. The film centers around a group of friends who accidentally killed someone in a car accident the summer before the film is set. A year following this, they're hunted down by a murderer with a hook as an arm, influenced by the urban legend of "The Hook."

It's no surprise that a film that would later inspire Scream in 1996 would feature the now-classic slasher use of threatening phone calls. When a Stranger Calls begins with a babysitter receiving a mysterious call to check on the child she's watching.

Jordan Peele—who brought us Get Out back in 2017—both wrote and directed this horror-thriller film starring Lupita Nyong’o. He harnessed that same uncomfortable, creepy vibe from Get Out and turned it up a notch, giving Us an entirely new level of terror.

Starring Jessica Biel, this remake of the 1974 original features Leatherface as the main antagonist once again, this time terrorizing a group of friends who had been on their way to see a concert. It follows roughly the same set-up, and though it was released in 2003, the film is set in 1973.

A much more modernized remake of 1974's Black Christmas, this iteration follows roughly the same plot, set at a college sorority house right around the time that students are leaving for winter break. When a murderer decides to take on the campus, the sorority sisters have to figure out how to survive.

Though this film is written and directed by Wes Craven of A Nightmare on Elm Street, it isn't necessarily a sequel to the franchise—it more so serves as a way of looking at both the original film and the genre of slashers in a new light. Instead of Freddy Krueger just being the villain in this movie, he's playing a villain of a horror movie in this movie.

The Strangers, inspired by the Manson family, stars Liv Tyler as Kristen, and Scott Speedman as her husband, James, as they go on vacation at his family's home in the middle of nowhere. This sounds like a bad situation already, but when the home is broken into, things get profoundly worse.

Although this holds the same title as its 1992 predecessor, Candyman (2021) isn’t a true remake—it’s simply inspired by the original film. This iteration's main character, Anthony, learns of the urban legend of Candyman and gets wrapped up in the myth, incorporating it into his artwork. The film follows the toll that the legend is almost unconsciously taking on Anthony.

Released on October 15, 2022, Halloween Kills is yet another sequel to the franchise, with Jamie Lee Curtis returning once again, as well as Kyle Richards, who's reprising her role as Lindsey Wallace from the original film. The movie picks up where the 2018 sequel left off, allowing for a seamless transfer of action from one film to the next.