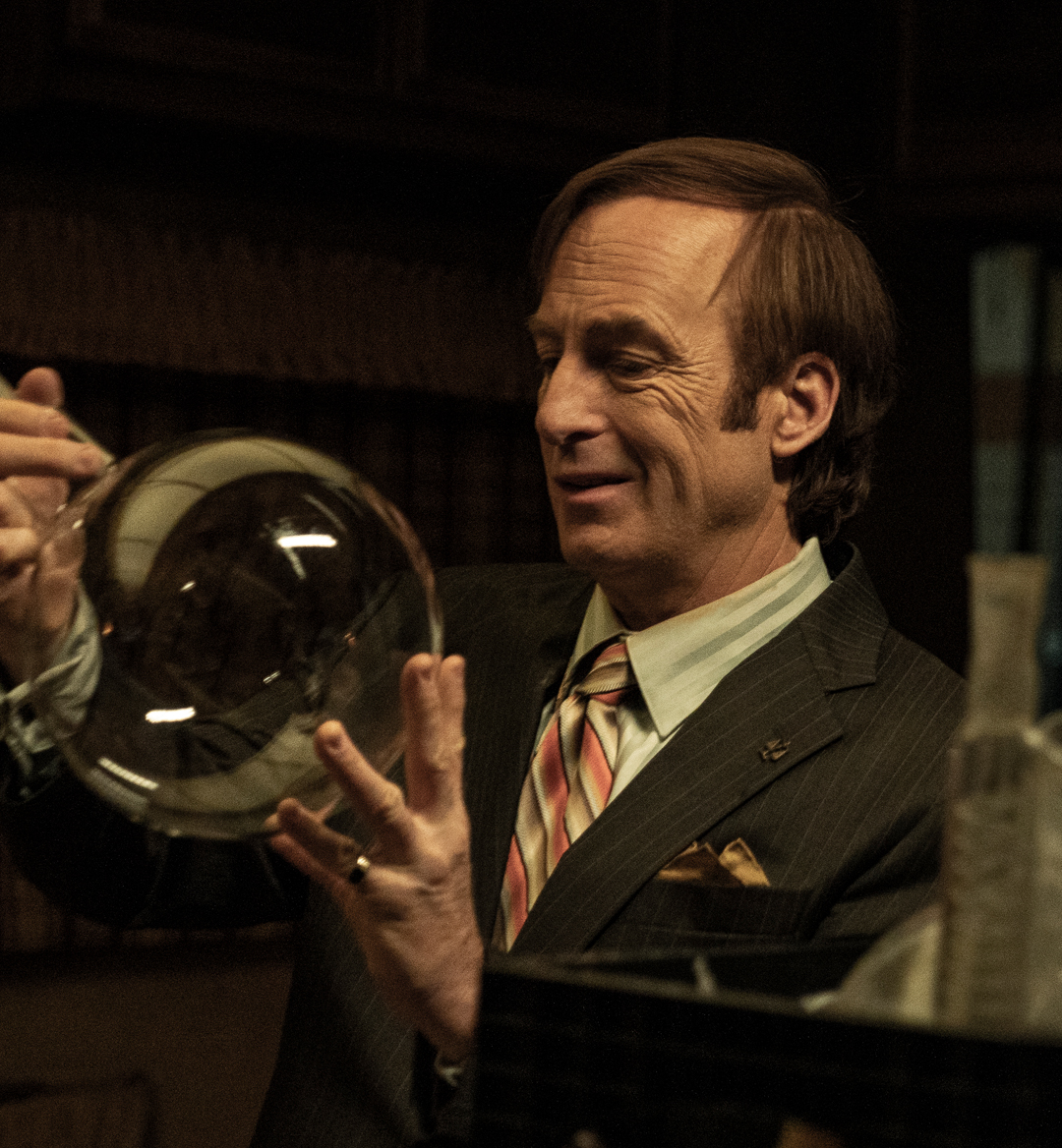 For many reasons, this week's episode of Better Call Saul, titled "Breaking Bad, " clearly indicated where things were headed. Last week, we saw Gene Takovic continue to slip back into his old ways, planning and executing an elaborate con at a department store, and in the past Saul Goodman encounters some familiar faces.

In many ways, they are telling the same story: A man going down a road he shouldn't be, with both of those tales leading to tragic ends. One man "escaped," and the other did not, but they were more alike than Jimmy/Saul/Gene would probably care to admit. 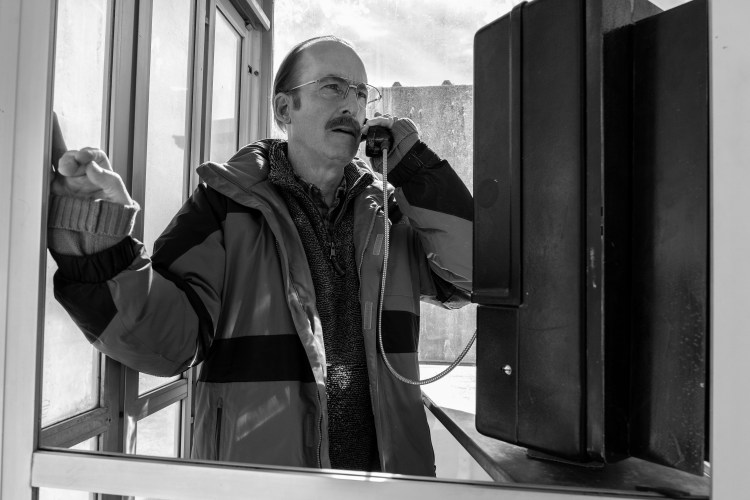 "Guys, come on. Habla por favor! Why are we going off-road? Anywhere but the desert! We can fix this. We can fix it with dinero. Mucho, mucho, mucho dinero!"

If this sequence is familiar to you, then you've probably watched Breaking Bad. The episode opens with Saul, hood over his face and tied up in the back of an RV. It's heading out into the desert for unknown reasons, and as they arrive at their destination, two men drag Saul out of the RV and shut the door. Five bullet holes that have been duct taped over are in the door, and right before the scene transitions, Saul screams: "It wasn't me. It was Ignacio! He's the one!"

We cut back to the present, where Francesca is trying to plunge a clogged sink in an apartment. She's the landlord of an apartment building, and she's being forced to deal with the two tenants who clearly smoke weed and have clogged that sink. She checks the time and decides to leave without fixing things because those two "dudes" are idiots.

She drives away and notices that someone is likely following her, but as she keeps going, they break off pursuit, and she continues to her destination. Francesca arrives at a closed-down gas station in the middle of the desert, waiting for a phone call at one of the payphones. Just as she's about to leave, the call comes through, and it's Saul/Gene on the other end. They had arranged to have this call way back in season four when things had gone to hell and Saul was making his escape.

After Francesca gets her payment (through an elaborate hiding spot), she gives Saul an update on where things stand. The police are still looking for him, they're following Francesca, opening her mail, and her phones are bugged. He thought things might cool down after Walter White died, but that's not the case.

We also learn about what happened to other characters in the wake of Breaking Bad. Skyler White managed to evade criminal charges by trading the location of Hank Schrader and Steve Gomez's bodies for immunity, and Jesse Pinkman's car (who we know made it to Alaska in the events of El Camino) was found near the border.

Saul's bodyguard Huell made it back to Louisiana unscathed, with Kuby's whereabouts being unknown. His money has also vanished with all the nail salons and other money streams being seized by law enforcement. His overseas account, which was in Francesca's name, was also taken by the police. Needless to say, Saul's seen better days.

Francesca lets Saul know that Kim had called to check in on her after everything went down and that she had asked about Saul. The news catches him by surprise, and he leaves the payphone behind but eventually heads back to make another call.

He makes a call to a sprinkler company in Titusville, Florida, and asks for Kim, who he thinks works there. The camera pans out of the phone booth. We don't hear the call, what's being said, or who he is talking to; however, it's pretty clear that it doesn't go as he would have liked. He smashes the phone booth in anger and walks away. 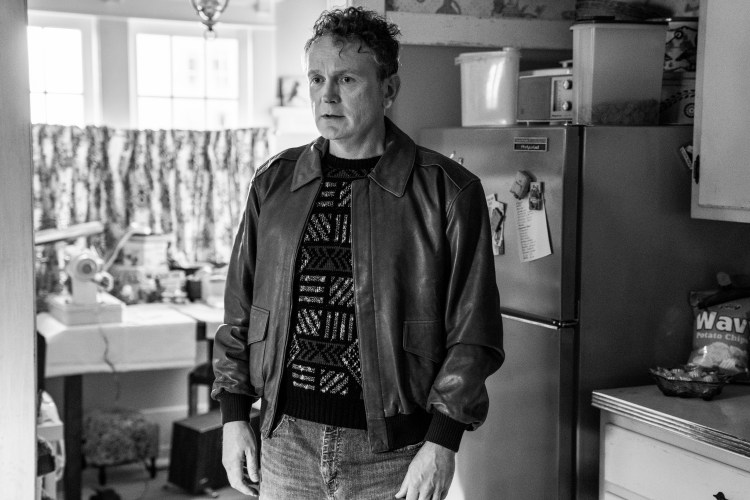 Jeff pulls into his driveway and spots Gene/Saul's car parked outside, where he is inside talking with his mother, Marion. They're watching cat videos on YouTube, and the three of them share some Schnapps.

They head out to the garage, where he asks Jeff about him getting onto a new shift at the taxi company. Jeff will take the overnight shift, and Saul will get his hands on some barbituates for a new scheme. Although Saul said their business was done, it's clear that the angry phone call has sent him back into his old ways again.

At a bar, Saul is sharing a drink with an obnoxious patron who is making a bunch of bets with him. The other guy is drunk, and Saul is playing along, using a bottle strapped to his stomach and a tube hidden under his sleeve to give off the appearance that he's also drinking.

They leave the bar, where a cab driven by Jeff is waiting to take the other guy home. Jeff drops him off at home and helps him inside, and just before it closes, Jeff adds a piece of duct tape to the inside of the door, preventing it from locking. Jeff and Saul's fellow crook Buddy then sneaks into the house while the man is passed out on the couch. He doesn't steal anything but instead takes photos of his driver's license, credit cards, checkbook, and a few other important items. He silently leaves the house, and the man is (hopefully) none the wiser.

Blast from the Past 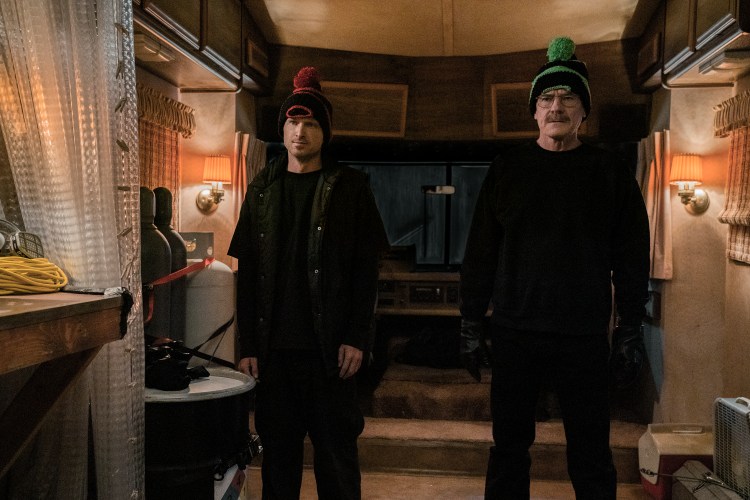 Are you ready for it? Are you sure?

Drumroll, please...Walter White and Jesse Pinkman are back! In an episode called "Breaking Bad," it only felt right to bring our favorite toxic, drug-dealing dynamic duo back into the fold. Jesse and Walt bring Saul back into the RV, where he asks about their whole operation.

Despite Walt's protests ("No details!), Saul figures everything out fairly quickly. He realizes they make the "blue stuff" and deduces that Walt is Heisenberg, given that the name and blue-colored Meth have begun popping up on the street.

They attempt to leave the desert, but the RV won't start. Walt says they just need to sit and let the engine cool down. In his panicked state at the grave, Saul had asked whether Lalo had sent Walt and Jesse, and Jesse asks about him. Still shaken at hearing his name, Saul doesn't give him an answer.

The trio leaves, and the camera pans up and over the empty grave, which then fades into the present day, where Saul is in bed. He hears a knock on the door, and he receives a package that contains a swing master. Saul lies down, puts his feet up, and as Mike Nesmith's "Tapioca Tundra" begins to play, we get a nice montage of Saul, Jeff, and Buddy's plan starting to play out.

Saul drugs bottles of water and gives them to Jeff to place in his cab, which he gives to each mark. This knocks them out, allowing Buddy to sneak in and steal the info. They then sell this to another buyer, making a bunch of money in the process.

Gene is fully back into Saul mode, and we see him back at home sharing his bed with prostitutes, counting his money, and relishing in the thrill of scheming once again. At another bar, Saul encounters another mark who lets him know that he has cancer, initially throwing Saul off. After a few rounds, Saul puts him into the cab with Jeff, looking like he has a bit of regret.

We go back to the past, where Saul is in his office using his swing master, running through his daily routine with Francesca. He's then visited by Mike, who is still working with Gus but is also serving as Saul's private investigator.

He runs through a list of people Saul had Mike look into: A cheating wife, a bus driver with a broken neck, and a "second story" guy. They then arrive at Walter White and Jesse Pinkman.

Mike tells him that Walter is sick, a chemistry teacher, and a real amateur in the game. Saul wants to reach out and get him more involved, but Mike advises him against it.

In the present, Saul makes his usual drink at his apartment, puts his feet up, and watches TV. He gets a call from Jeff and heads back to his house, where Marion sees him in the garage with Jeff and Buddy.

Buddy tells them that he doesn't want to rob this latest target because he has cancer, which Saul gets angry about. Buddy refuses again, and Saul tells him to get lost. Saul asks Jeff if he is in or not and that if he is, they need to continue with the plan.

They arrive at the house, where Jeff drops him, and Saul says he'll break in, even though the door has been locked due to Buddy removing the duct tape. This scene is framed against another one from the past, with Saul visiting Walter's high school. They are incredibly similar, except for one detail: Saul enters the high school without issue, but in the present, he breaks the door to the target's house and forcibly enters. The episode then cuts to black. 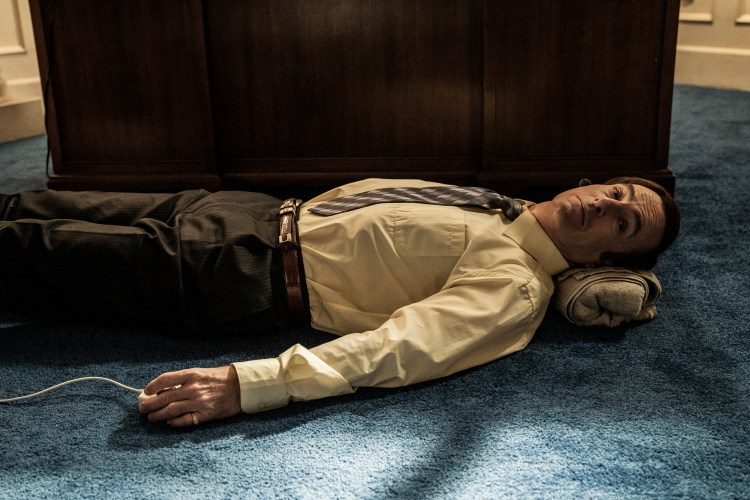 The return of Walter White and Jesse Pinkman quickly became one of the most talked about reveals ahead of the new slate of Better Call Saul episodes. Where and when would they show up? What new info would we learn from this flashback?

What we got in "Breaking Bad" was just the right amount of Walt and Jesse for this series. They didn't need to be a significant presence in the final episodes; we already know their stories and how they end. Thankfully the team behind Better Call Saul did not choose to overuse them, giving us a little bit more of what we needed to fully paint the Saul Goodman picture.

Gene Takovic becoming Saul Goodman again almost felt like an inevitability. A guy like Jimmy/Saul can only stay on the straight and narrow for so long, and without Kim Wexler there to rein him in, Saul goes all in on crime again.

Given the teaser for next week's episode showing that the police are now involved, it seems like, after all this, Saul may finally be getting his just deserts.