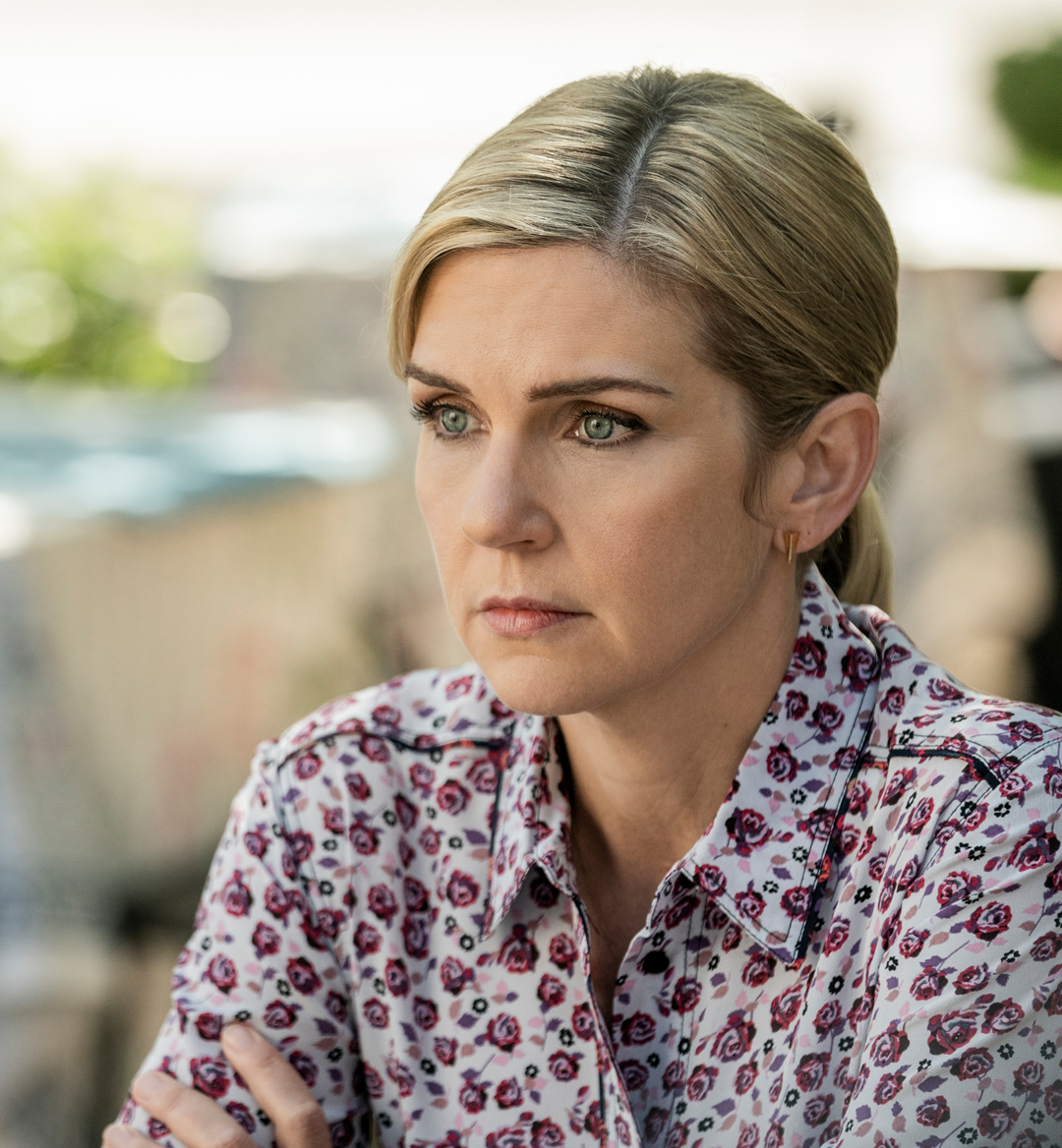 The fourth episode of the final season, titled "Hit and Run," was directed by series star Rhea Seehorn and continued to bring the worlds of Saul Goodman and Jimmy McGill ever closer to finally merging completely. 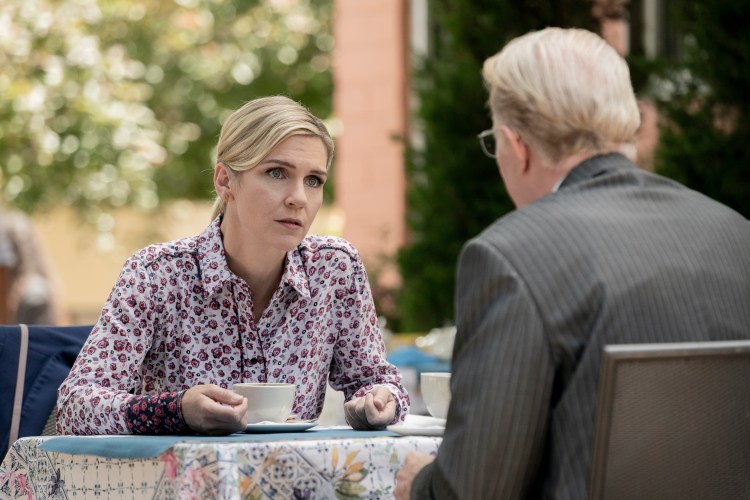 While much of the series has been based on Jimmy's penchant for causing mayhem and playing tricks on the unsuspecting to further his goals, in "Hit and Run," we see him in full Saul mode.

In his first scene, we see Saul walking down an alley dressed in his Howard Hamlin-esque suit, with his makeshift car key from last week that he uses to steal Howard's car from the parking lot of his psychiatrist's office. In full Howard disguise, complete with a spray tan and wig, Saul races to the parking lot of a familiar seedy motel and picks up Wendy, the sex worker. Breaking Bad fans will recognize her as a frequent collaborator with Jesse Pinkman, who used Wendy to cover his tracks whenever he needed help to escape the law or rival dealers.

Meanwhile, Kim is at an outdoor cafe waiting to have coffee with Cliff Main, Howard's lawyer friend and associate. Saul goes flying past at chaotic speed, eventually screeching Howard's jaguar to a halt in the middle of the street. In full view of Cliff, he "angrily" tosses Wendy out of the car's front seat (she had been in on the scheme.) Like when the bag of fake cocaine Jimmy planted had fallen out of Howard's locker, Cliff stands there confused and is left wondering whether that was actually him.

Before that had happens, Kim, who had originally gone there just to buy time for Jimmy, pitches Cliff on a pro-bono defense firm, much like what she has been doing since the start of the season. Cliff is more than impressed by Kim's pitch, and he offers to help her get in touch with state politicians to enact some real change potentially.

Kim then takes Wendy back to the motel and pays her for her services. When Wendy spots what she thinks are undercover cops parked across the street, she laments that work is over for the day. Kim gives Wendy her business card and offers her services free of charge if she finds herself in legal trouble.

As Kim drives off, the car begins to follow her for a few blocks before trailing off, leaving her shaken.

Saul returns Howard's car to the doctor's office parking lot when he notices that Howard's parking spot has been taken by someone else, despite placing a cone there. "Who moves a cone?!" he shouts before struggling to pull a "Patients only" sign out of the ground and into the parking spot in which he places the car. He then leaves, pulling the scheme off by the skin of his teeth.

Returning to the condo, we see Kim and Jimmy running through the day's events having a good laugh about everything that had transpired. After they both recount their days, Kim somberly asks Jimmy, "Do you ever think you're being followed?" After attempting to play it off as nothing, "Well, you know what they say: 'The wicked flee when no man pursueth,'" Kim simply asks him, "Do you think we're wicked?"

This throws Jimmy off balance, who tries to shift into comforting husband mode and alleviate her concerns. Given his experience with the criminal underworld, he assures her that no one knows what they're doing except for them. 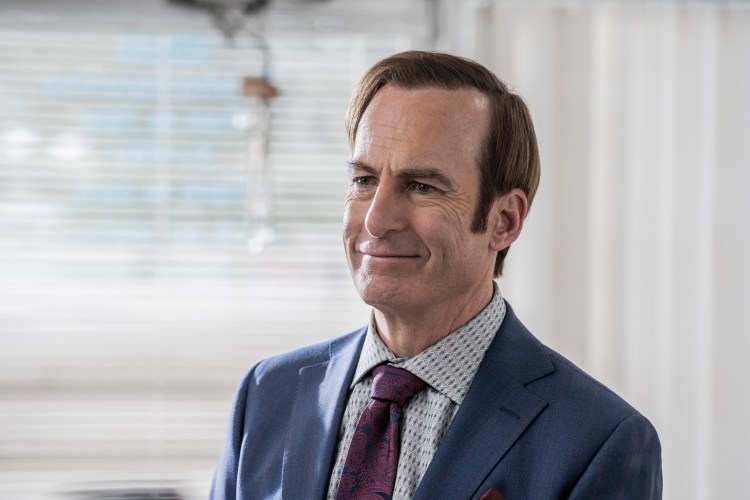 At the courthouse, Jimmy finds himself as a pariah amongst his peers. Those who normally pal around with him treat him with utter contempt. Jimmy has denied Suzanne Ericksen's offer to snitch on Lalo and is treated coldly by everyone there.

As he moves through the courthouse, he is forced to undergo a thorough security check; he then tries to convince the court clerk to reschedule a hearing which he's essentially denied and attempts to chum it up with prosecutor Bill Oakley. None of these moves work for Jimmy until Oakley finally tells him that since he helped Lalo escape justice, no one will see him the same way.

To them, he is no longer Jimmy; he is simply Saul Goodman, a friend of the Cartel.

Despite this setback, Saul's business seems to be booming as his phone blows up with new clients calling him and asking for his services. In the wake of Lalo's escape, Saul's name has spread like wildfire amongst the criminal underworld.

When Saul heads to the nail salon to meet with these new potential clients, Mrs. Nguyen is less than pleased as these folks aren't here for her services but Saul's.

While there, Saul even comes across a face that should be familiar to Breaking Bad fans, although you'd be forgiven if you don't recognize him at first. Spooge, who eventually becomes a customer of Walt and Jesse's, makes his way to the law firm of Saul Goodman, looking for help.

In Breaking Bad, he is a full-blown meth addict, but here he seems to be in the early stages of what will become a more serious life of crime. Spooge appears to serve as a glimpse into the impact that Walt, Jesse, and in effect, Saul will have on the future of the Albequerque criminal underworld.

Due to the massive influx of people, Mrs. Nguyen has finally had enough of Saul and his law practice and throws him out altogether, forcing him to look for a new place of business. 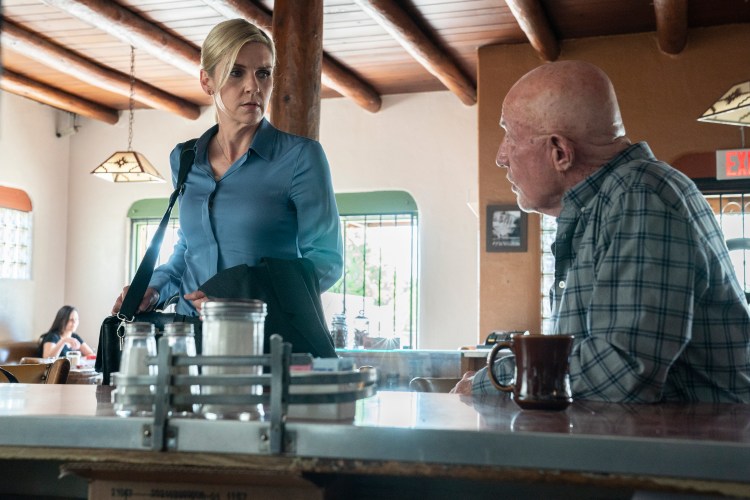 We cut back to Kim at the El Camino restaurant meeting with a client. She spots the blue car that she believed was following her the other day and marches across the street to confront them. She discovers two men sitting in the car and asks whether they are APB looking into Jimmy or someone else entirely. When she threatens to call in their plates, they drive off and say, "Sorry if we disturbed you, have a nice day, mam."

She eventually finds out that these men aren't APD but are employed by Mike Ehrmantraut. Another sign that Jimmy and Saul's worlds are on an inevitable collision course, Mike, in a sign of respect for Kim, lets her in on the fact that Lalo is alive and on the run. His men are keeping an eye on her in case Lalo attempts to make contact with Jimmy.

This is the first time in the entire series that Kim and Mike have shared a scene and conversed. Kim figures out that Mike was the man that was stuck in the desert with Jimmy last season, dragging bags of money in the heat to get it back for Lalo's bail. She asks why he's telling her and not Jimmy, and he responds, "I believe you're made of stronger stuff than him."

While Mike wouldn't confirm it, simply saying, "I will answer what I can," he leaves Kim in a semi-state of panic, as she now knows how much danger she and Jimmy are in. Before Mike leaves, Kim recognizes him, "You're the parking lot attendant." A man she had once barely interacted with was actually a fixer and soldier for one of the area's biggest drug dealers.

Mike says to her, "I was," reflecting on how far he has come from season one until now. Both of them have changed since then, Kim into a pro bono attorney that still wants to do good but also engages in some bad, Mike becoming the somber and efficient soldier he is now.

Kim proceeds to meet Jimmy at a familiar strip mall, one that will play a significant role in the life of Saul Goodman. He needs a new office and shows off a storefront available to lease. While it's certainly a fixer-upper, it's near the courthouse and the bail bondsmen, which will undoubtedly be advantageous to him in the future.

She is mentally distracted by the news she just received from Mike but she elects not to tell Jimmy as he is riding high from his great day.

The episode ends with them leaving the future "cathedral of justice" and going to get tacos. 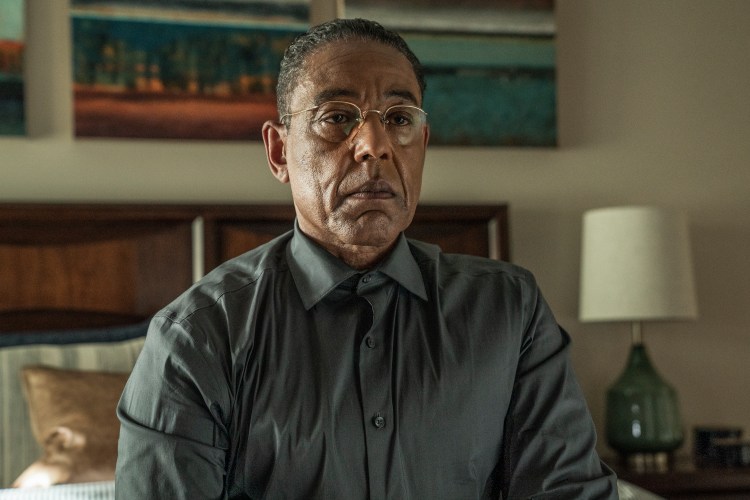 The episode opened rather innocuously as we followed a married couple riding their bikes through a neighborhood, commenting on someone's choice of house paint before arriving back home. As they continue their discussion, they find a group of armed men in their kitchen but are not startled. In fact, they ignore them entirely and maintain a "business as usual" attitude.

It's revealed that the house is owned by Gus Fring and is connected to his actual home next door via a secret underground tunnel. (It seems Gus has a passion for underground bunkers.)

Ever the one to maintain tight control over everything in his life, he has cameras set up to overlook the entire neighborhood to maintain a careful eye on any potential attackers. His paranoia is beginning to set in as Lalo remains on the hunt and won't end until the Lalo situation is resolved. 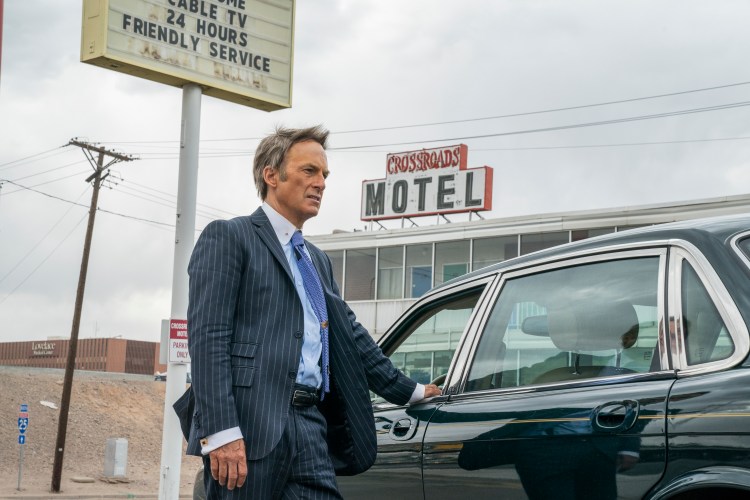 You'd almost never know that this episode of Better Call Saul was the first one that Rhea Seehorn had directed. It fit so seamlessly into the show's mold and was so well done that it's amazing that Seehorn has such a great grasp on things from the get-go.

The episode was wracked with both humor and tension, and the conversation between Kim and Mike will, no doubt, go down as one of the highlights of the show's final season.

Better Call Saul is careening towards an explosive finish, and the only question that remains will be who is caught in Saul's wake.