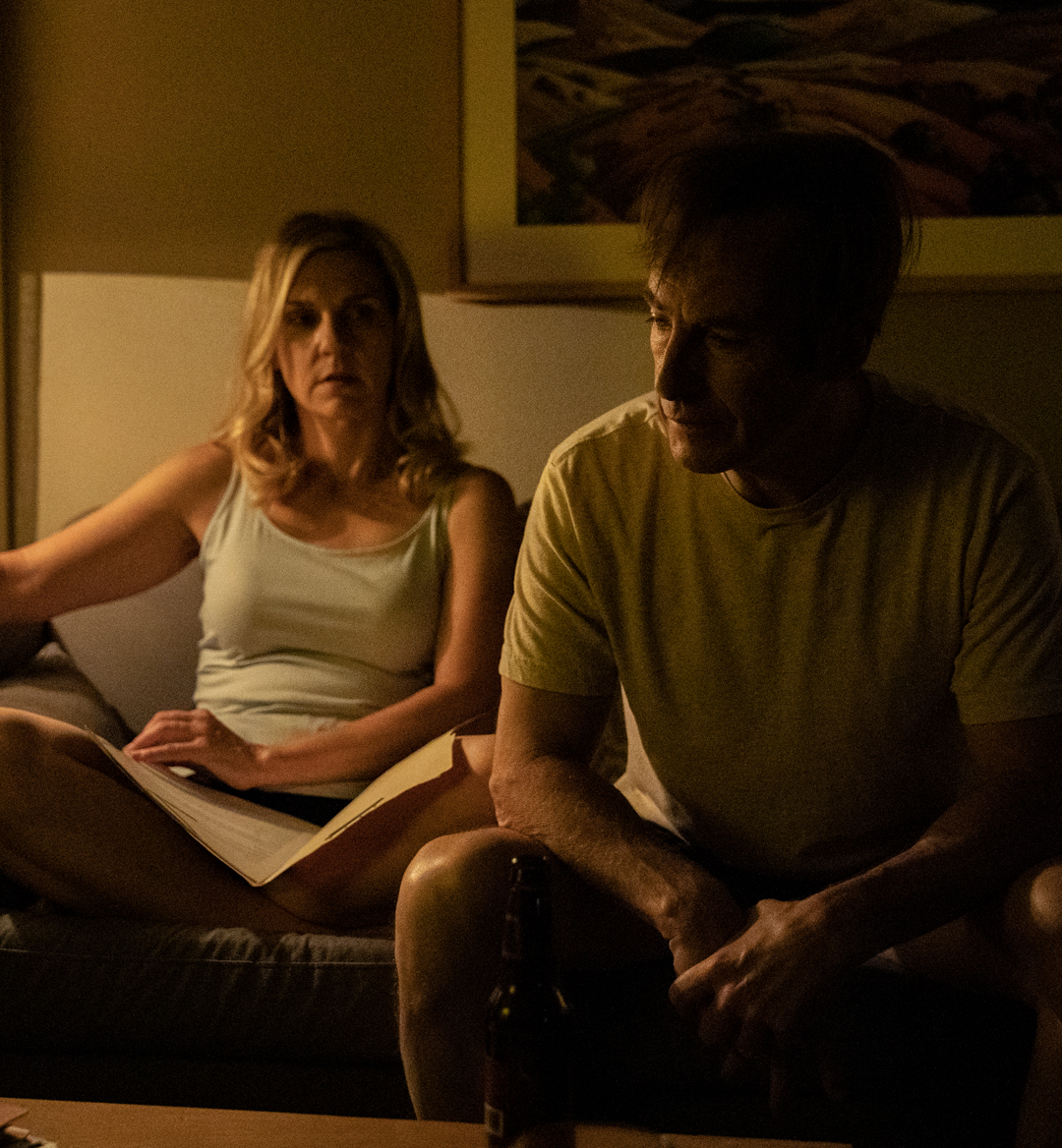 "I do have a problem. Just not the problem you think. I have a Jimmy McGill problem."

In three sentences, Howard Hamlin politely summarizes many of Better Call Saul's storylines across nearly six and a half seasons. Love him or hate him, Jimmy has a talent for being a thorn in a whole hell of a lot of peoples' sides.

As we approach the end of the series, moving closer to the events of Breaking Bad, Jimmy continues his metamorphosis into Saul Goodman. Elsewhere Gus Fring still has a Lalo problem, becoming ever more agitated by the second, and it seems as if Howard has finally reached his breaking point with Jimmy. 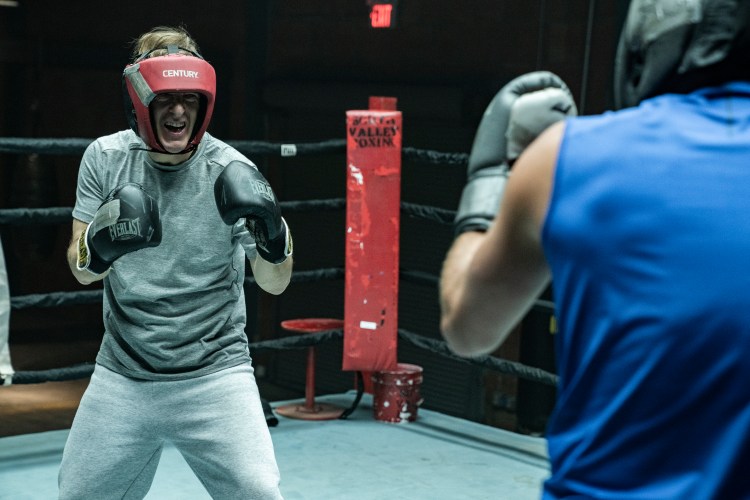 Neither of them knows it, but Gus Fring and Jimmy share the same problem: Lalo Salamanca.

"Black and Blue" opens with Jimmy and Kim in bed; Kim, unable to sleep, heads out to the couch but not before grabbing a chair and placing it against the front door. After all, when a murderous cartel member is on the loose, a little extra security never hurts, right?

Jimmy walks out into the living room to check on her, wanting to see if everything is alright, and he notices the chair, saying, "I was hoping it was just me."

After finding out from Mike that Lalo was still alive last week, Kim decides not to tell Jimmy. There is no immediate danger, so it's probably better not to burden him with the knowledge. Jimmy has enough problems right now; there's no need to add another to his plate.

"The nuns in Cicero would send me to hell for saying it, but I'm glad he's dead," Jimmy says to Kim. If only you knew Jimmy if only you knew.

Meanwhile, it was only a matter of time before Howard eventually wised up to Jimmy and Kim's schemes, and it seems he's finally had enough. As he finishes giving a speech reassuring the senior citizens of Sandpiper that they are putting all the effort they can into their case, Cliff Main confronts Howard about his "drug" problem.

Cliff runs through everything he believes Howard has done—the empty baggy at the country club, the clients who allude to his alleged problem, and then Wendy, the sex worker, being pushed out of his car.

Howard agrees to fix his problem, not the drug one that Cliff thinks he has but, as said before, his Jimmy McGill problem. How does he hope to solve this? Well, he plans to fight him—legally, of course.

Jimmy is then lured to a boxing gym by Howard. He makes it seem like he is a prospective client and then goads Jimmy into climbing into the ring with him. At first, Jimmy refuses, but, as he's been known to do, he eventually relents because he can't help himself.

When they get in the ring, they both land some punches. It's certainly not the most athletic boxing match ever put to screen, as this is two older gentlemen attempting to take out their frustrations on one another. Howard eventually gets the better of Jimmy, knocking him to the mat with a final punch to the face.

After the showdown of the century, Howard meets with a private investigator and hires him to spy on Saul and track his every move.

Clearly, Howard has had enough of Jimmy's games.

We cut to Jimmy arriving back at the apartment and using Kim's makeup to cover up his black eyes. Jimmy seems to be upset with himself for letting his desire to punch Howard in the face get the better of him, but as Kim reminds him, "you know what's coming next."

An ominous sign of things to come, no doubt. 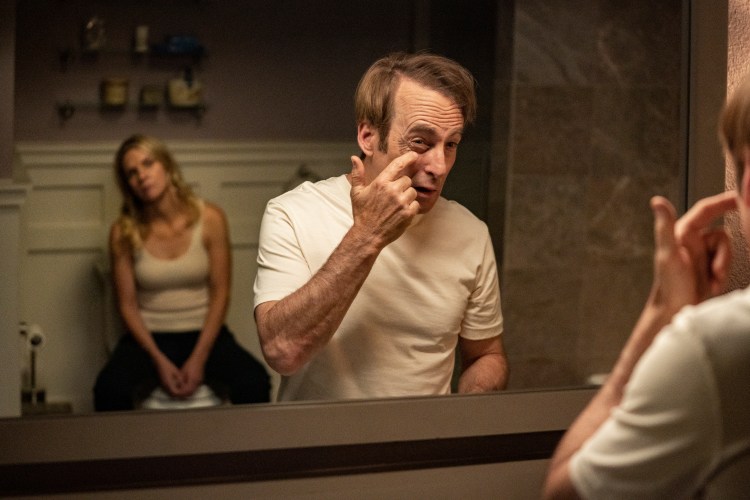 Outside of the Howard Hamlin boxing match, things in Jimmy's professional life continue to take shape.

We catch up with him at his new law office in that old familiar strip mall. It's still a work in progress—there's still an old toilet in the middle of the room—but as Jimmy says, "it's just day one."

He has reached out to Francesca, who was his receptionist once upon a time in Better Call Saul and will be once again through the end of Breaking Bad. Although she's initially apprehensive about taking a job that involves sitting at a folding table next to a toilet, Jimmy convinces her to come on board after she gets a nice pay raise from him.

Francesca will, one day, become a willing aide in Saul Goodman's day-to-day criminal activities, helping him shred papers as he makes his escape from Albequerque, but for now, she'll be helping him sort through his growing client base.

The Word of the Week Is Paranoia 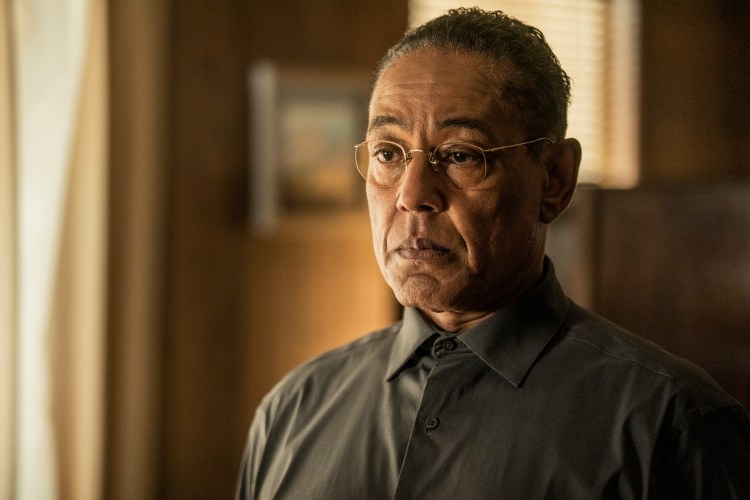 It's not often that we see Gus Fring, the master of control, knocked off kilter. Meticulous in every sense of the word, he has total dominance over both his drug dealing and his Los Pollos Hermanos' lives.

Lalo Salamanca has thrown him off balance, with nearly every shot of Gus in this episode being wracked with tension. We know that Gus survives the events of Better Call Saul, given that he's a major player in Breaking Bad, but whether he survives unscathed is another question entirely.

We find Gus in his office at Los Pollos Hermanos, tensely working through paperwork before looking at himself in the mirror and double-checking that he has his pistol strapped to his ankle.

He observes the restaurant's employees busily working through their routines, and he goes to the register to help a customer. As his mind drifts elsewhere and the tension builds, he's suddenly shaken by the dropping of metal pans behind him. He then promptly walks out of the restaurant, looking out over the parking lot, wondering if his enemy is waiting around the corner.

When next we find him, Gus is in his "neighbors'" house, scrubbing the bathtub with a toothbrush, hoping to regain his sense of control. Mike approaches him, saying, "Part of the reason we set it up this way was so you could get some rest."

There's no news yet of Lalo, so Gus continues to prepare. He and Mike head to the still under construction superlab underneath the laundromat. Mike gives him an update on progress, telling him that a construction tunnel that was being used for it has been sealed up tight with dirt and concrete.

Gus walks through the lab, checking and rechecking different aspects of it. Here, he believes his showdown with Lalo will occur, and he wants to be ready. He hides a gun underneath some of the construction equipment, preparing for the inevitable.

A better example of a Chekov's Gun there could not be.

Where in the World is Lalo Salamanca? 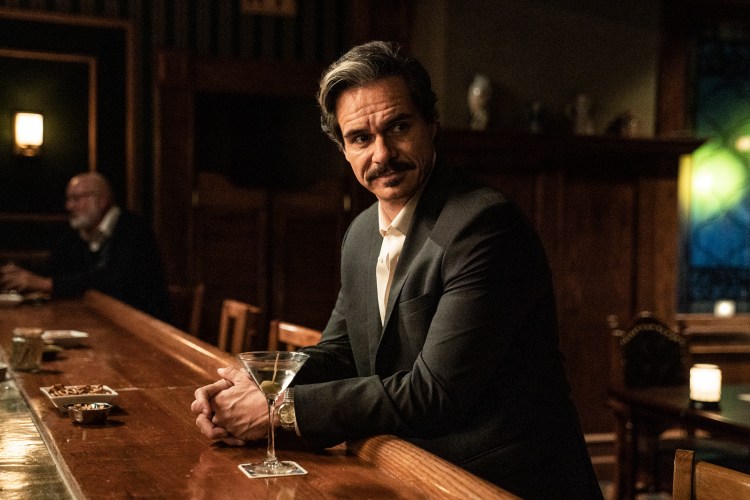 We haven't seen our old pal Lalo since the season premiere, leaving us all wondering what part of Mexico he was roaming around in, looking for his evidence against Gus.

As it turns out, he isn't in Mexico, but he is actually in Germany. We arrive at a bar, where a few people are playing a trivia game, and a woman named Margarethe casually drinks while reading a magazine.

A man rolls up to the bar and orders a martini, revealed to be Lalo. After casually chatting with Margarethe, Lalo and her move to a nearby table to continue their discussion. We learn that she is the widow of Werner Ziegler, the chief planner of Gus' superlab.

Werner was murdered by Mike, and she was told that he was killed in a construction accident. Lalo has gone all the way to Germany to try and get to the bottom of what exactly Gus had Werner and his crew were constructing. Unfortunately for Lalo, Werner did not tell her much about what he was working on since he was forbidden to by Gus and Mike. Lalo tries to squeeze information out of her, but he falls short.

They walk back to her house, where she breaks things off for the night, and they part ways.

The following day, she leaves for work, and we see Lalo break into her home, looking for information. He does not find much before hearing her dog barking. Margarethe has come home, having forgotten her cell phone.

Lalo hides, placing a silencer on his pistol, ready to do the unthinkable (for us, not for him) should she discover him. However, he manages to sneak out a window before she does, ending the episode.

The episode had opened with a classic Breaking Bad/Better Call Saul intro of something innocuous happening that inevitably comes into play later. In this instance, it was a trophy that had the words "In Liebe...Deine Junges" engraved on it, meaning "With Love... Your Boys."

Lalo took it with him as he escaped, hoping this would lead him to the crew of Werner, who had left New Mexico once Werner was killed.

Very few shows can take what is otherwise a much slower-paced episode and turn it right around by making it extremely tense, leaving you needing to catch your breath. Better Call Saul is undoubtedly one of them.

While much of the episode revolved around shuffling the cards and ensuring characters arrive at the places they need to be, it ends with a scene racked with tension that sucks right back in.

"Black and Blue" is a solid Better Call Saul episode, even if it succeeds at only getting things together for the finish. Now that Lalo is back in the game, where everything goes from here is anyone's guess.