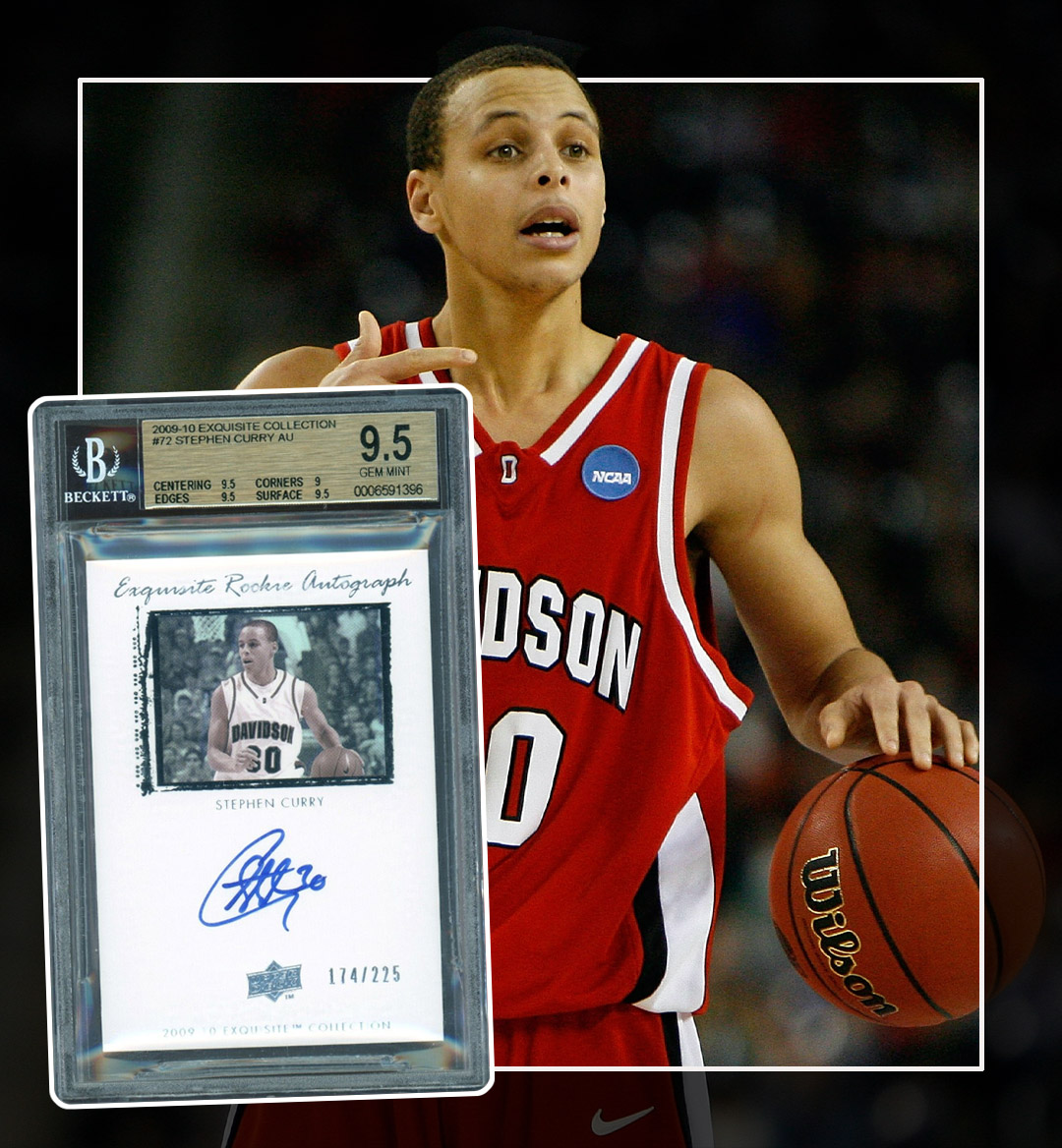 Before diving in to the world of college basketball cards, let's quickly talk college hoops. The home of storied programs, dedicated fanbases, and the greatest tournament ever created.  Every year, millions of fans fill out brackets and watch the future of basketball battle it out for a chance to cut down the net.  We’ve seen these teams turn into dynasties, and we also get a glimpse at the early greatness of some of the best to ever play the game.

Recently, we’ve seen the modern student-athlete be able to market themselves far more than in years past.  The NCAA’s new NIL (Name, Image, and Likeness) rules enable players to partner with brands and capitalize on their abilities.  And thankfully, these new guidelines have resulted in some major moves in the hobby.

In June, Topps and Fanatics announced an array of new deals that would give them exclusive rights to many major D-1 programs and players starting in 2023.  This means we would be able to own licensed cards of future stars before they sign an NBA or WNBA contract.  However, college basketball cards have existed long before NIL deals or these recent acquisitions.

So today, we will give an overview of everything you need to know about college basketball cards.  We’ll showcase the companies making college trading cards today as well as the memorable sets of the past.  We will also try to offer some insight into the future of the college hoops market.

Who Currently has the Rights to Make College Basketball Cards? 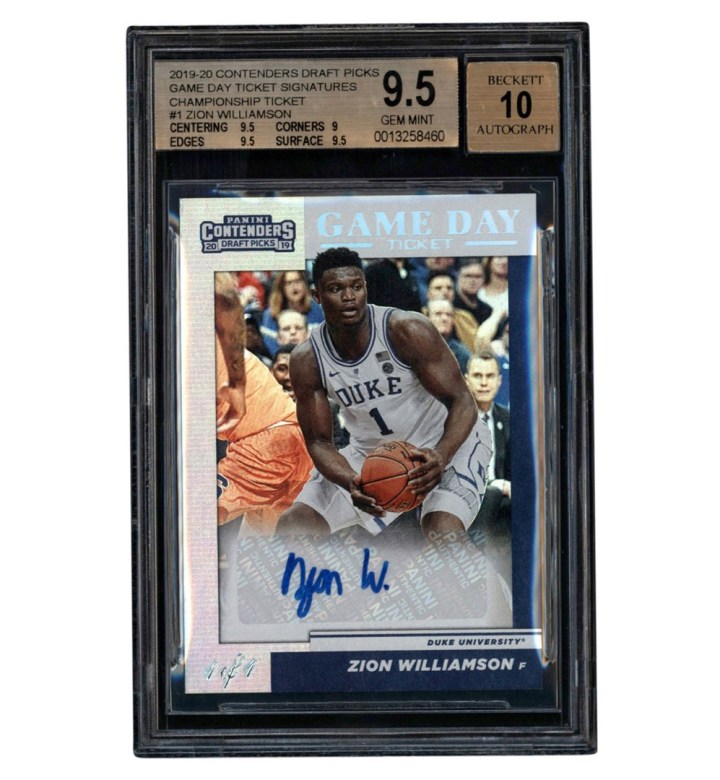 At the present time, Panini is the only company making collegiate products that include licensed logos.  They began making sets like Contenders Draft Picks and Prizm Draft Picks in 2015. This has extended their production to higher-end boxes like Immaculate, National Treasures, and Flawless.  These releases, which are always filled with the highest quality, typically do not come out until after the NBA Draft.  While many still open and enjoy these boxes, the allure of collecting a player’s card whilst in college has yet to be captured.

By using the same designs and technologies that brought Panini to the forefront of the hobby, they’ve made some memorable cards for college hoopers.  Take, for instance, the Zion Williamson 1/1 Game Day Ticket Auto shown above, which sold for $4,800 last year. 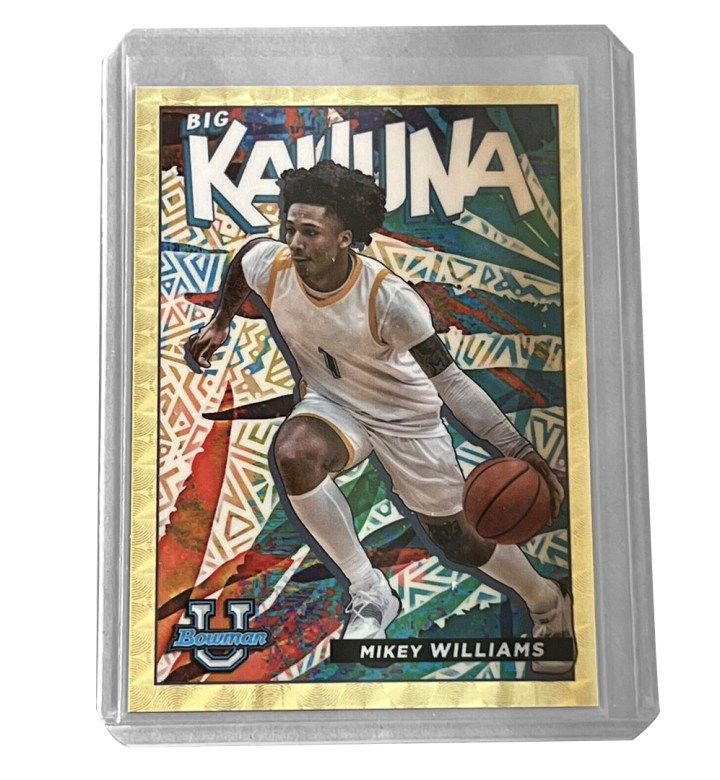 Now we will delve into some companies who are creating college b-ball cards without logos.  The first, and most newsworthy as of late, is Topps/Fanatics.  Fanatics acquired Topps back in January, sending the hobby into a frenzy of predictions.  After acquiring the sports card giant, Fanatics CEO said in a statement that “Their iconic brand, commitment to product excellence, and passionate employees worldwide will allow us to immediately serve our league and players' association partners and our fans.” And that branding has already been implemented into NCAA cards and collectibles.

Their first basketball release, 2021-22 Bowman University, utilized the iconic “Bowman 1st” set to highlight the premier talent in college hoops.  It featured autographs of top draft picks, including Gonzaga standout Chet Holmgren.  They also engineered some really neat insert sets for the product, including the “Big Kahuna” card of young phenom Mikey Williams shown above. With major Power 5 programs like Kentucky giving over licensing rights next year, it will be interesting to see what Topps/Fanatics can create next. 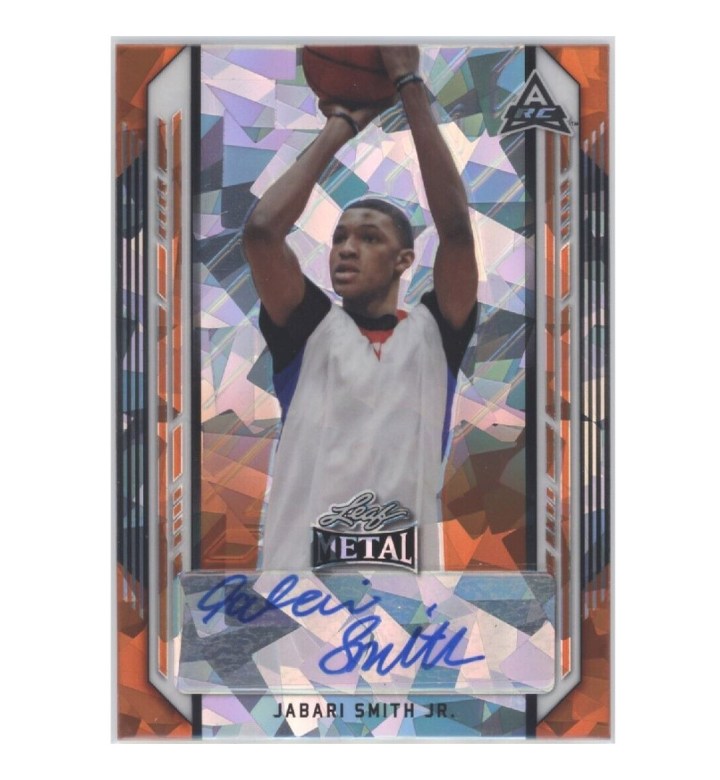 Another company known for its vast autograph checklist is Leaf.  Products like Leaf Metal Basketball give collectors a chance to find on-card autos at an affordable price. Sometimes, they are even able to secure autographed cards of prospects before they can be found in licensed products.  Take this Jabari Smith Orange Cracked Ice Auto for instance, which sold for $460 in June.  Smith currently does not have any pack-issued autos from Panini or Topps, so this card gives an early chance to invest in a top draft pick from 2022. 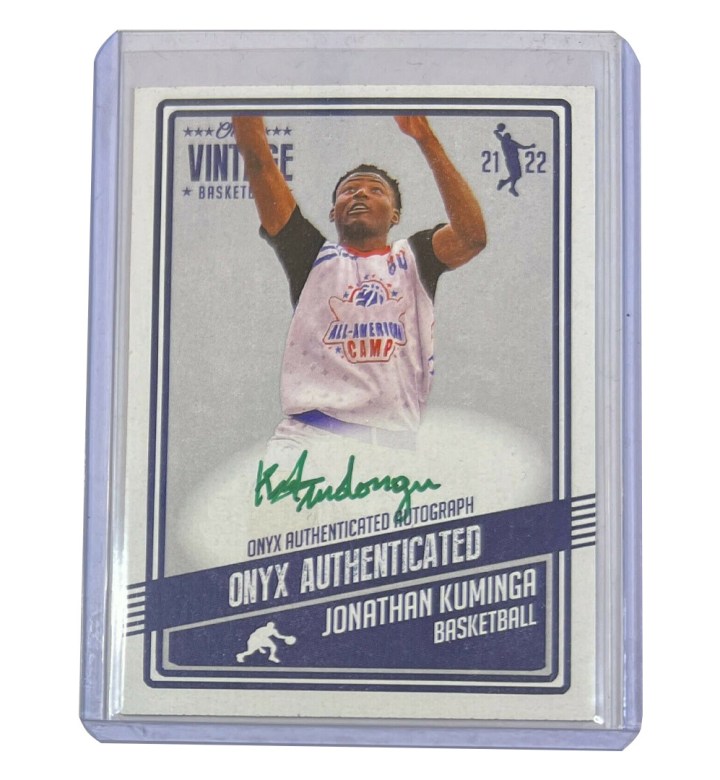 Finally, companies like Onyx also offer an alternative to higher-end collegiate products.  While they are still unlicensed, they secure big names for their autographs, and their sets have unique designs and appeal.

Which Companies Have Made College Basketball Cards in The Past? 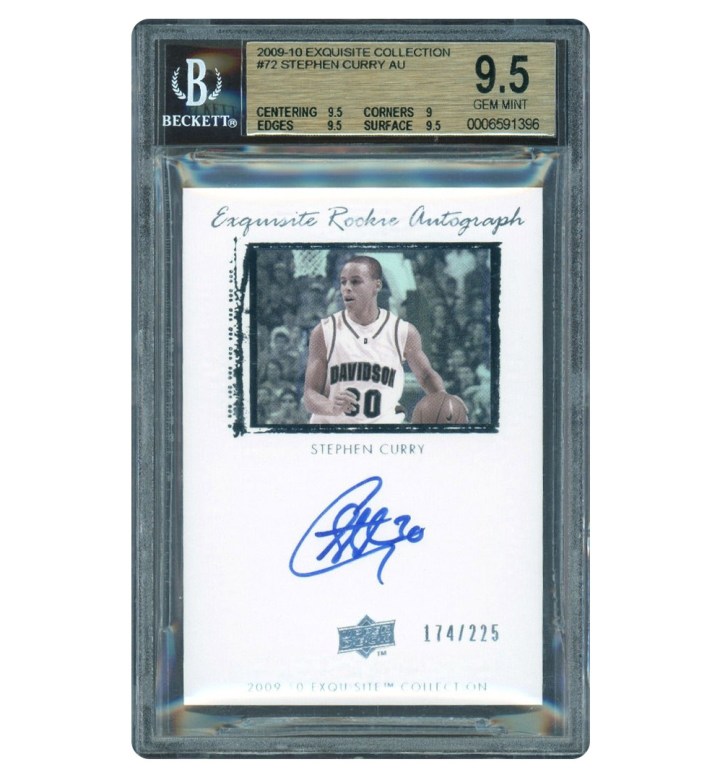 For many years, Upper Deck releases a variety of premier products that featured players in their college uniforms.  This arsenal of beloved sets included Exquisite Basketball, SP Authentic, and the mythical Precious Metal Gems.  Because the Upper Deck name is so revered in the hobby, these cards still bring a heavy premium at auction and are highly desired.

It is worth noting that Upper Deck still produces college basketball products in a very limited capacity.  They have maintained the autograph rights to stars like Darius Garland, who has an Exquisite RPA in 2020 Upper Deck Goodwin Champions.  However, since Goodwin Champions is a multi-sport product, we did not include UD in the same category as Panini and Topps.  Regardless, their presence in the college card market is well documented and still in demand. 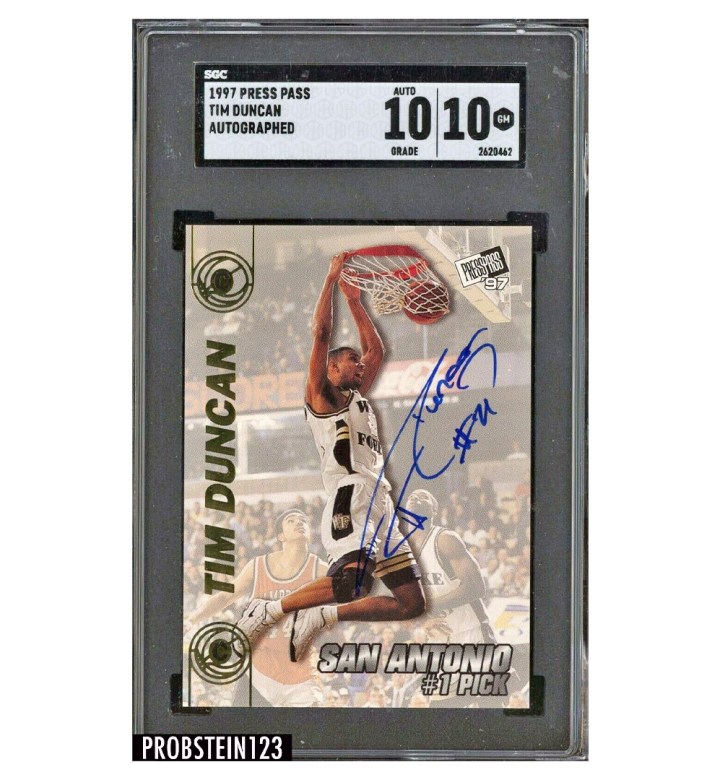 Press Pass, a company most known for its racing card production, made some college basketball sets at a crucial time in the hobby.  Autographed cards of Tim Duncan, Kobe Bryant, and Vince Carter are heavily collected to this day.  The brand continued to manufacture college cards into the 2000s, but these gems from the late 90s classes remain the most popular. 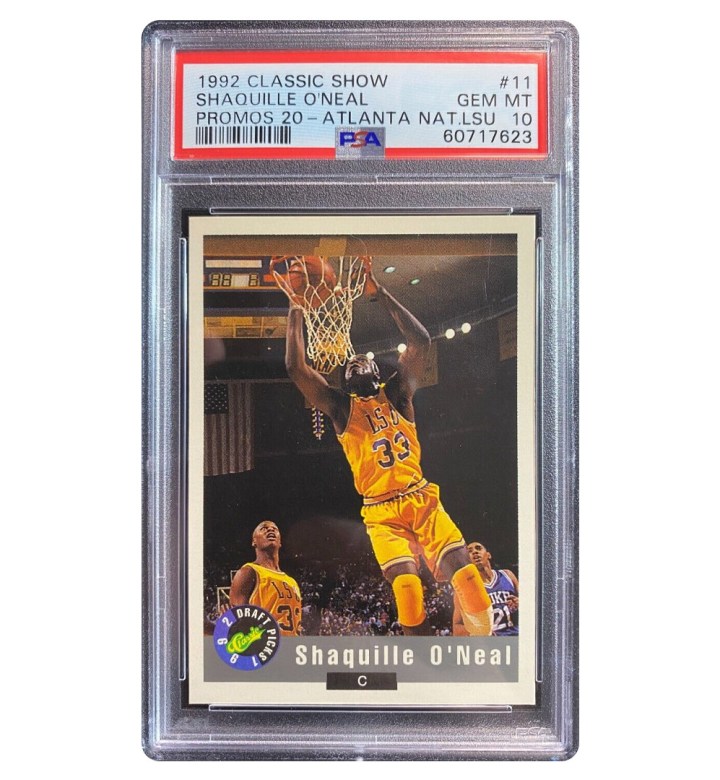 Finally, we have the now-defunct Classic cards, which were primarily made in the early 1990s.  Their most sought-after basketball card is an early rookie of Shaquille O’Neal, which is one of the few to capture him in his LSU Tigers jersey. Most of these cards failed to retain their value due to the mass production that plagued the junk wax era.  But their clean and simple design still transports the collector back to a different time in basketball history.

Predictions for the Collegiate Card Market?

So what are college hoops releases going to look like in the future? As Topps can implement more logos and branding into its Bowman University product, we could see college cards transition into a way of prospecting future stars.  This is a very popular way of collecting in baseball, as people pay quite the premium for Bowman 1st autographs. It could also prove to be a good method of investing in a player if you truly believe they will be successful as a pro.

We could also see the collegiate market serve as an inexpensive alternative to pro-uniform products.  This year’s Bowman University hobby box retails at only $120, yet it comes with 96 cards and 2 autographs per box.  For comparison, the recent 2021-22 Prizm Hobby Basketball drop went for around $1,300.  Obviously, Prizm and other flagship releases are regarded more heavily, but that doesn’t mean you cannot pull amazing hits out of college hobby boxes. Just check out this Chet Holmgren gold auto below, which sold for over $800 in June. 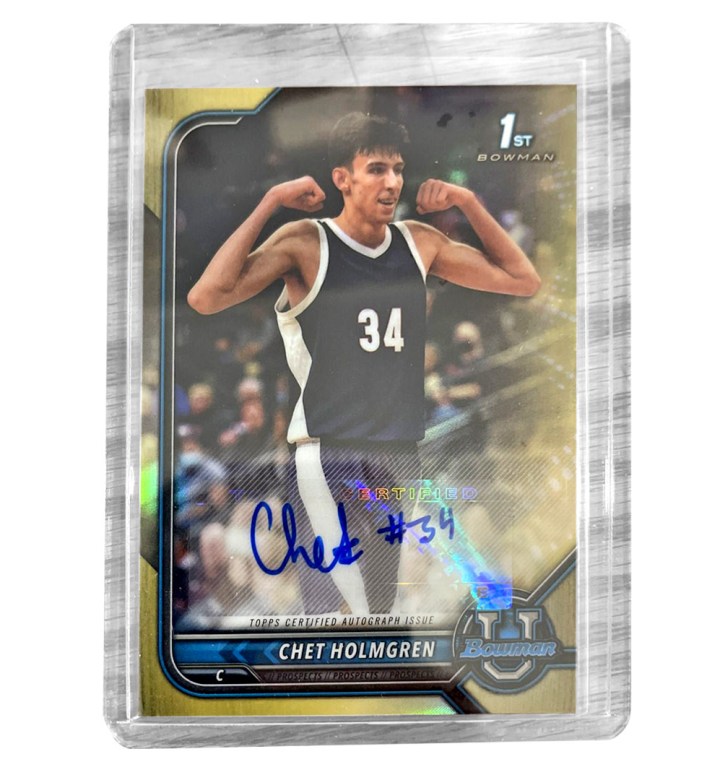 Finally, we can see the collegiate card market remaining strong just based on the immense fandom college sports has.  Millions of students, alumni, and lifelong followers gravitate toward their school’s athletics every year, generating millions in revenue.  It isn’t a wild thought to imagine fans wanting a card of their star point guard before they hit the pros.  And with Topps inking more and more NIL deals, there’s no limit to how players and teams can be utilized on cards.