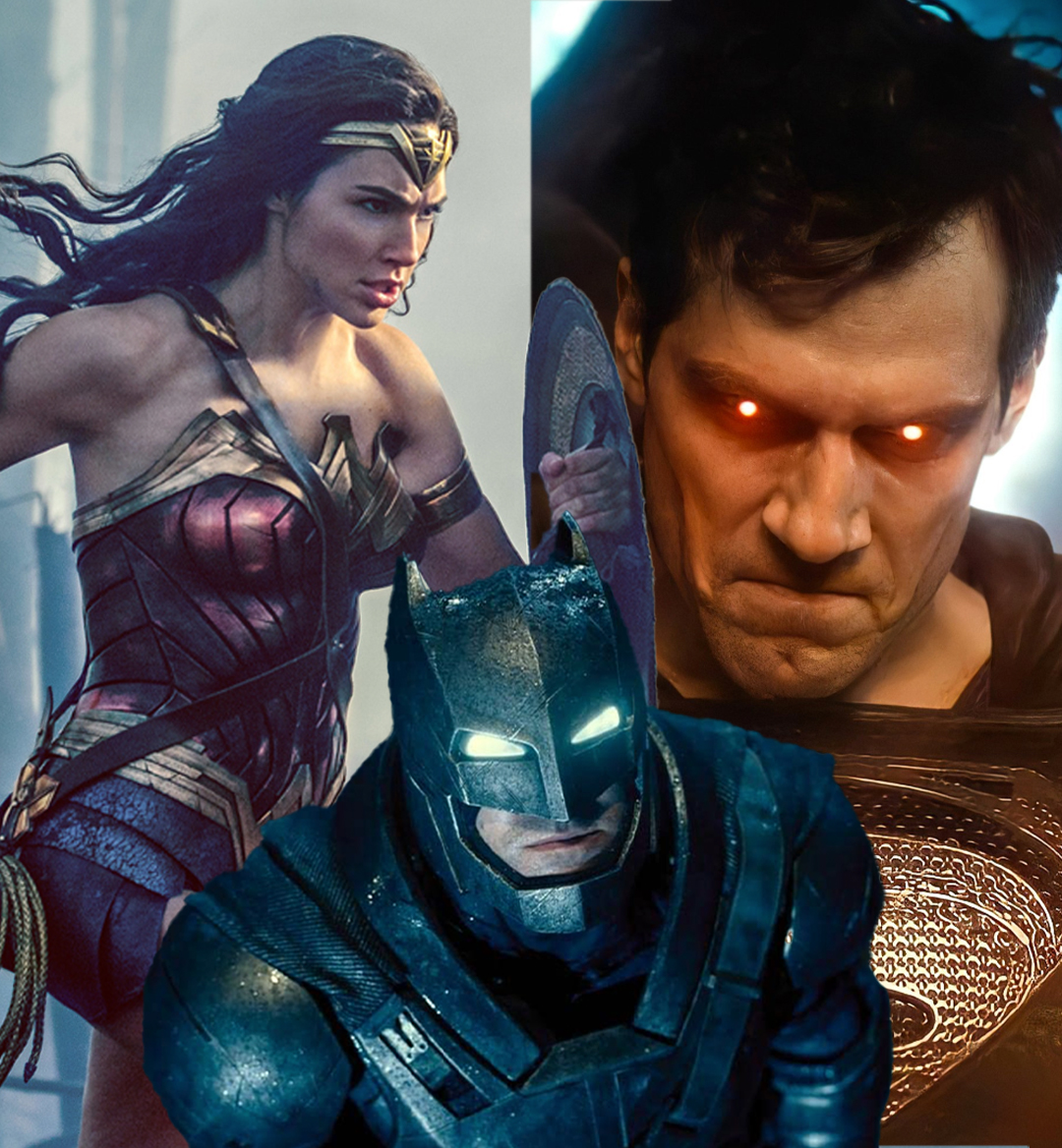 It’s been a confusing road for the DC Extended Universe thus far. With Batgirl's recent cancellation, Ezra Miller's whole... existence, and Black Adam and Shazam: Fury of the Gods on the horizon, the whole thing is, lightly put, a mess. Trying to match the success of the MCU in terms of fan and critical reception, and most importantly financial success was a hefty task to take on from the jump. The lack of a concise vision hasn’t helped, with most of the films varying in tone and overall world feel, leaving fans disoriented and confused as to what to expect. What made Marvel so successful? To me it's the formula that they stick to, while repetitive, it’s crowd-pleasing, and they know it. Despite the lack of cohesion, the  DCEU has produced some great content once you sort through all the garbage. Here are all of the DCEU movies, ranked.

A tonal mess from start to finish.

Gal Gadot’s debut as Wonder Woman came in Batman v. Superman: Dawn of Justice, a dark, brooding, grittily realistic take on the superhero genre. Her character was presented as such, and in the subsequent solo films featuring her, that style has been completely abandoned for the worse. Wonder Woman 1984 attempts to reach the comedic, childlike humor heights of Shazam! while trying to frame our titular character in a more humanistic light, and it fails.

From the great heights of the opening scene to the great lows of the following scene, it's a quality rollercoaster that has an overwhelming net downhill. The positives include some audacious, colorful visuals (something that has always been present and should be MORE present in the Wonder Woman series,) and some positively over-the-top performances from the likes of Pedro Pascal. Worth watching solely for completion, we can only hope the third DCEU entry doesn’t disappoint.

Hard to rationalize this being over WW84, besides the fact that one of the two actively left me bored, and it certainly wasn’t Suicide Squad. The first DCEU entry in the Suicide Squad series is a mess, an incomplete, torn up (we’ll get to this later), tonally inconsistent mess, but it has more positives for me than I’d like to admit.

Overwhelming positives like some passionate performances that we would eventually get much more of like Margot Robbie as Harley Quinn, the role she was born to play. Viola Davis as Amanda Waller, and Joel Kinnaman as Colonel Rick Flag, are all passionate, lovable performances and we are lucky that they reprised their role after the disaster that this film was critically.

A structural mess with mostly hollow characters of nothingness who embark on a nothing journey against a nothing villain, but a fun one when it boils down to it, and I can’t in good conscience place it last.

Unfortunately can’t get behind this one. Fascinating action and captivating editing help this become something I want to love. Smash zooms and bold choices are offset by overwritten, overacted overzealous, somehow dull monotony. Feels like it had overwhelming potential with the action sequences and the overall tone, which if it had been seen to its full potential could have been great (as we saw in Zack Snyder’s Justice League), but this is not its full potential, this is bad. A rough start for the DCEU.

Even as a moderate Snyder/DCEU defender I can’t defend this film. Truly a piece of work, but not for a lack of trying. While Suicide Squad and WW84 feel uninspired, BvS feels like a passion project in a sense. It’s an attempt at a rich thematic dive into character psyches that unfortunately failed for me, but succeeded for many people as the film has become a massive cult classic since release. Failing in part due to Warner Bros.'s tendency to chop up and ruin films made for them, completely straying from the director’s vision, but also in part due to Zack Snyder’s general overzealousness.

Positives range from the cinematography of Larry Fong, the overall tone which is very definitive and a breath of fresh air in the monotonous comic book movie world, and the performances from Ben Affleck and Henry Cavill, who I personally love as their respective characters, but the negatives sadly outweigh the positives.

Incoherent in the theatrical form, with a messy script and foggy character motivations. The ‘Ultimate Cut’ is an improved version of the film, and would likely place somewhere around the top five, but the wide release version is inexcusable as a whole.

Maybe the first DCEU movie I’ll acknowledge as "good". Well directed and thankfully not overwritten like every single previous entry. Wonder Woman is dazzling in action, unique in setting, and charming in performances, but what was awful about Gal Gadot’s performance in WW84 is entirely unpresent here, she stuns and impresses as the titular character, and her chemistry with Chris Pine’s Steve Trevor is palpable. Accompanied by her now iconic musical theme, Wonder Woman kicks ass and takes names in this long overdue solo outing.

Words cannot describe how glad I was to see Shazam (or Captain Marvel for the old heads out there,) get his silver screen debut.

One of the most unique characters in the DCEU and the entire DC Universe, this movie leaned into his unique style and attitude more than I could have ever expected. Narrowing in on the childlike wonder of Billy Batson and his newfound power. Shazam! is a comedy first and foremost, badass action sequences aside, this film is encapsulated by the hilariously adorable training sequences, family moments, and immature jokes.

With likable characters, a decent load of mature emotion, and pounding action sequences, Shazam! becomes the most unique comic book film to grace the public in, ever?

4. 'Birds of Prey (and the Fantabulous Emancipation of One Harley Quinn)'

Similar to Shazam!, Birds of Prey (which I will be calling this and only this to avoid the mouthful that is the full title), truly leans into the characters' quirks and humor.

Adult humor and adult gore are the calling card of this DCEU entry. Brutal action sequences with shockingly violent conclusions, are absolutely not what you would expect going into this. Birds of Prey is a graceful mix of three aspects that make superhero films great, action, adult humor, and visual flare.

The finale of this film will leave you with your jaw on the floor due to its out-of-this-world visual finesse and eye candy style. Incredibly impressive and Incredibly underrated from a visual point of view thanks to Cathy Yan and cinematographer Matthew Libatique. If that’s not enough to entice you, just remember that we are blessed to see Margot Robbie’s Harley Quinn, and we mustn't take it for granted.

Aquaman perplexed audiences upon release and continues to do so even now. Aquaman is hilariously over the top while simultaneously being a serious tale of revenge and honor. It’s an action-packed, exciting film with beautiful effects and the wackiest dialogue and plot of any DCEU film, but most importantly it’s self-aware. Aquaman leans into everything that made the character so beloved in his initial appearance in theatrical Justice League.

James Wan made his name as a horror director known for his stylistic flair and success with the general populace, but this film proved he knows how to direct cohesive action. The underwater sequences, and the land sequences which somehow get even more ridiculous both feature unconventional battles with underwater physics but Wan and the VFX team orchestrate these scenes beautifully. You can tell Wan has a sense for action because in films like this it’s easy to lose track of what’s going on during big battle sequences, but that isn’t the case in Aquaman.

To no one’s surprise, James Gunn delivered with The Suicide Squad. Those who passionately hated David Ayer’s Suicide Squad (most) will be pleased with this entry in the series and will thank Gunn for doing these phenomenal characters and actors justice. Gunn, now the only director to work both in the MCU and the DCEU, applied his signature style of overly stylized gore, dating back to his Troma days, combined with his on-the-nose humor which makes the movie a comedy, but not too much like a comedy.

The film walks the tonal slackline between comedy, action, and drama gracefully, and I couldn’t be happier that we finally got a crowd-pleasing feature with Task Force X.

You may have noticed I didn't place the original theatrical run of Justice League on this list, only room for one Justice League in this town, and I'll be damned if I side with Warner Bros. evildoing. How could it not be first?

Regardless of your stance on Snyder's previous films, his previous DCEU films, or the director himself, Zack Snyder's Justice League is a coherent, definitive, singular vision realized to its full potential. Everything that held back BvS and Justice League is gone here. The emotion that the creators wished to achieve was achieved once the characters were fully developed (Cyborg most notably as the emotional backbone), and the grandiose theatrical event action set pieces that were so lackluster in Justice League are fully realized.

Further creative liberties are also taken with the aspect ratio, editing, and so much more. So refreshing to see a director get full creative liberty with a project that contains existing IPs.

From the opening scene you see the large-scale world-building that you're about to witness, and if you let yourself get sucked in it surely won't disappoint.