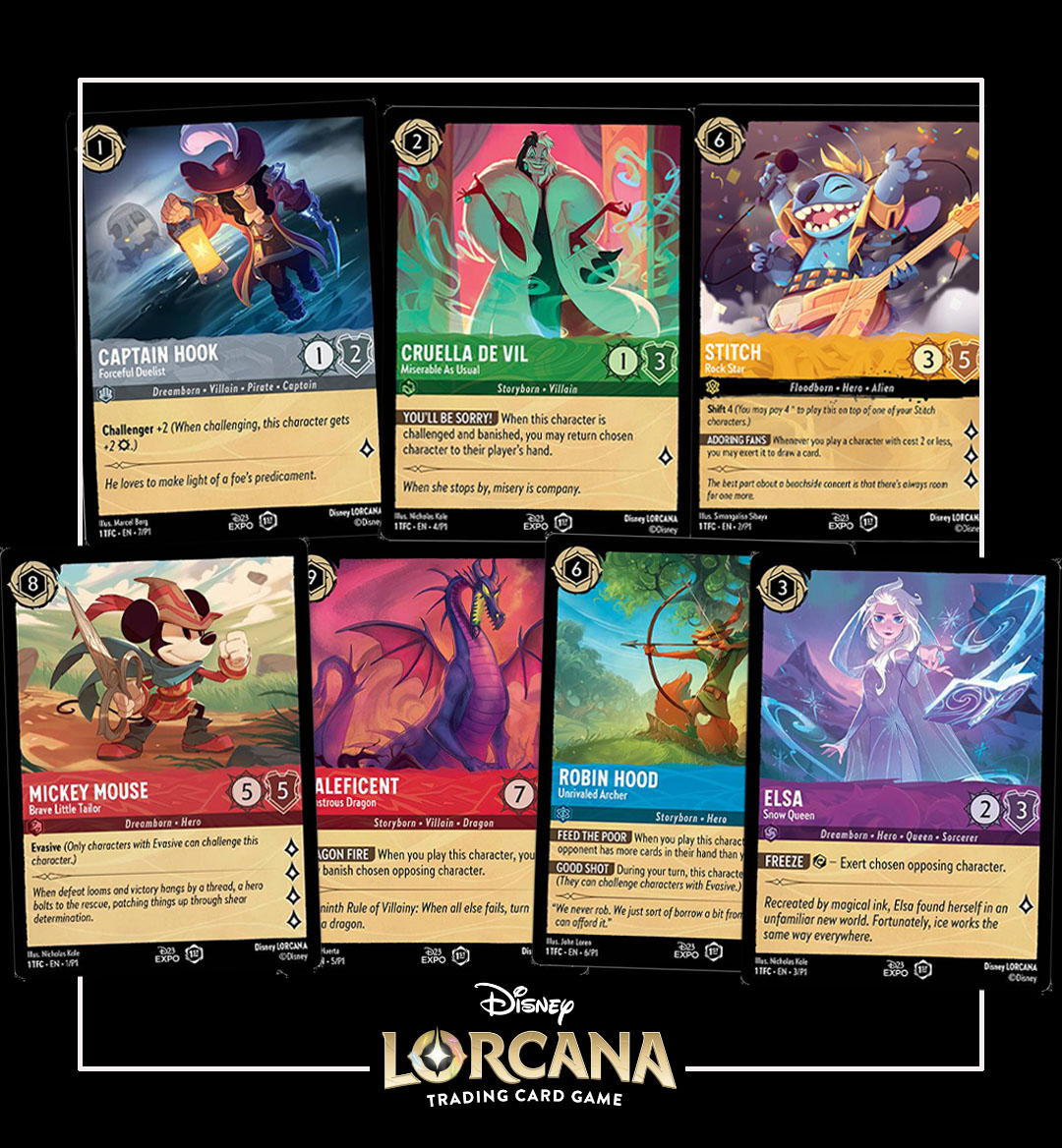 If you haven't heard of Disney Lorcana, all you should need to know to pique your interest is that some of the world’s most popular characters are coming to a trading card game.

Lorcana is Disney’s first venture into the TCG world, and it is already becoming a big topic of discussion. After being revealed at the company’s D23 Expo last month, fans were quick to get their hands on the first edition set.

That set, which featured seven cards, was limited to approximately 300 copies at the expo.  The following characters were previewed: Cruella De Vil, Elsa, Captain Hook, Maleficent (dragon form), Robin Hood, Stitch, and Mickey Mouse. Needless to say, they were sold out within hours. Each of them features a D23 emblem along the border, which is a special designation for this promotion.  Some have been graded at PSA already, and sales are beginning to roll in.

The full product rolls out next fall; until then, let’s break down the features of Lorcana and some early sales! 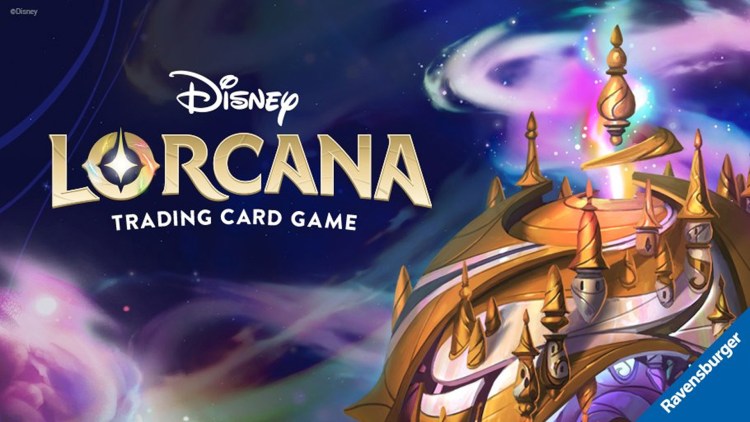 Lorcana is developed by Ravensburger, a longtime Disney licensee.  Much like Magic: The Gathering and other TCGs, the cards feature character illustrations and their written abilities.  Collectors and players will act as “Illumineers” in the game by wielding these characters and their powers.

Even from the D23 set, it is evident that the artwork was heavily emphasized for these cards.  Ravensburger enlisted designers like Simangaliso Sibaya, Nicholas Kole, Luis Huerta, John Loren, and Marcel Berg for this project.  So far, the imagery is similar to that of an old Disney book, and all of the cards seem like characters in a fable.

Additionally, every card will have its own “ink,” which may operate the same way as colors in Magic: The Gathering.  The official inks have been revealed as Amber, Amethyst, Ruby, Sapphire, Emerald, and Steel.  However, the game’s developers have yet to address the function of these inks.  More information is expected to drop as we gear towards next autumn.

A few of the cards from D23 have already been slabbed and sold, so let’s check out Lorcana’s market! 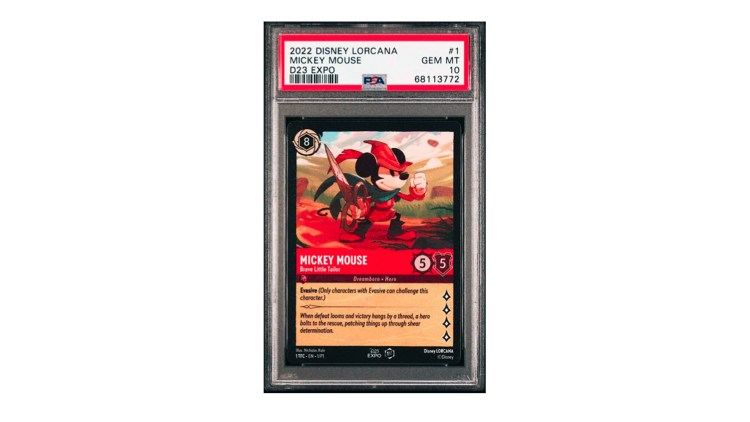 In only a month’s time, we’ve seen multiple gigantic sales for these low-pop graded copies.  Mickey Mouse may be the most recognizable cartoon in the world, and now he has a modern card to collect.  His PSA 10 Lorcana card (pictured above) just sold for $3,000– quite a pretty penny!

Since debuting in 1928, Mickey Mouse has remained iconic in popular culture.  He was Walt Disney’s first commercially successful cartoon, and those three circles are still seen in theme parks, TV shows, and title screens all over the world.  We expect his card to be one of the most sought-after in the entire set. 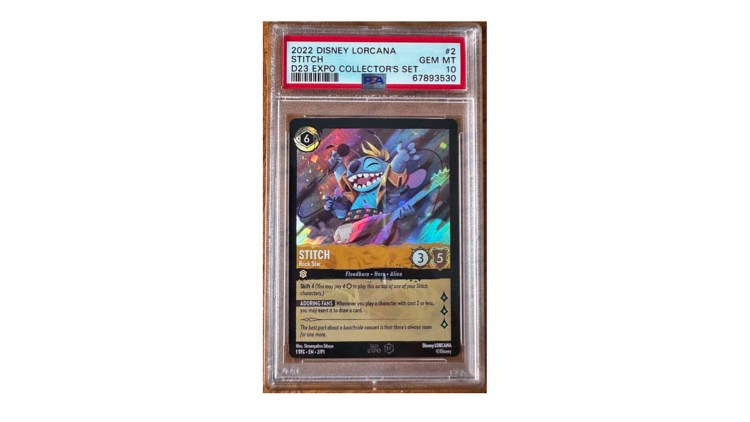 Next, we have Stitch, everyone’s favorite extraterrestrial koala.  This POP 14 copy is among the first Lorcana cards to go up on an eBay auction. It currently holds the record for the highest sale to date; the slab shown above sold for $3,427 in October 2022.

This card is a testament to the intricate artwork mentioned before.  Collectors get a glimpse into the personality of our beloved Stitch while also getting an aesthetically pleasing cut of cardboard. 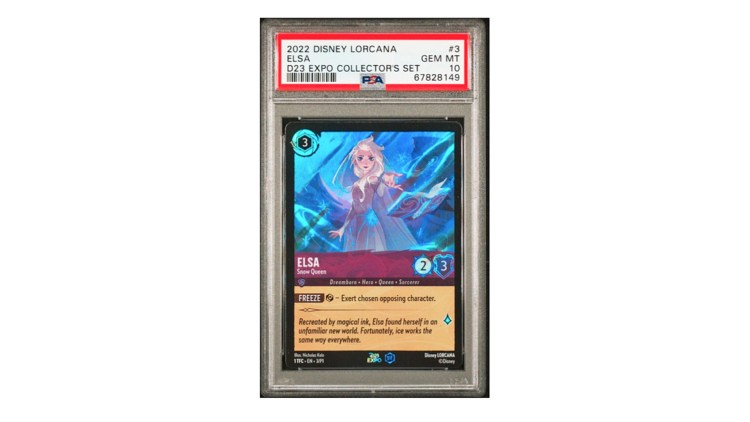 Now we have Frozen’s cherished protagonist, Queen Elsa.  Since premiering in 2013, Frozen has garnered both praise and commercial success for its storyline and songwriting.  And Elsa, voiced by Idina Menzel, has become a favorite among Disney fans.

It’s no surprise that a benevolent character like Elsa reached a $3,000 sale price.  This card also showcases visually striking artistry that hones in on the Queen’s magical powers.  We’ll have to see if Elsa’s sister, Anna, or Olaf, the adored snowman, make it in the first launch next year. 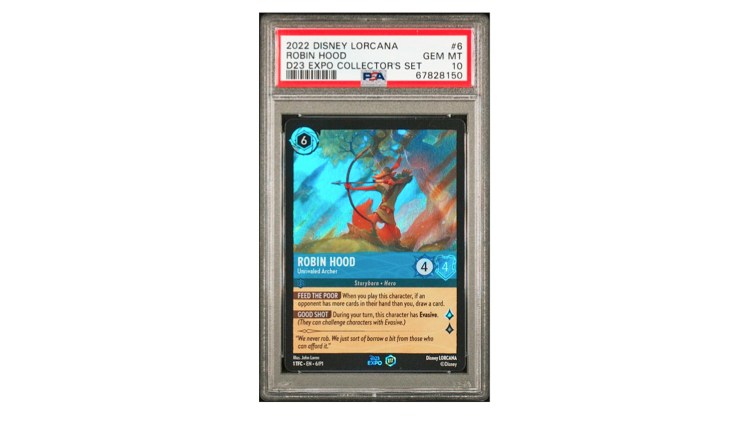 Finally, we get our first glimpse at Robin Hood, one of the most famous archers in all of fiction.  Even though the Robin Hood movie came out nearly 50 years ago, he is still one of those personalities cemented in Disney lore.  The first PSA 10 copy up for sale went for $2,175, marking yet another four-digit Lorcana sale.

Just from a seven-card promo release, the Lorcana market is already trending upwards.  So, let’s talk a little about the months to come for this highly anticipated TCG.

What's Next for Disney Lorcana?

Disney Lorcana: The First Chapter is slated to debut in Fall 2023.  It will contain all the characters from the D23 set and many more of our childhood favorites.  While some details have still not been revealed regarding the product, many updates can be found on the brand’s Twitter page.

While Disney has an inarguable grip on all things pop culture, it will be interesting to see how the company fares in the TCG world.  Lorcana will already have familiar names gracing the cards, so folks of all ages will know who they’re collecting.  Regardless, we look forward to covering its release next year and hearing what people have to say about this brand-new trading card game.