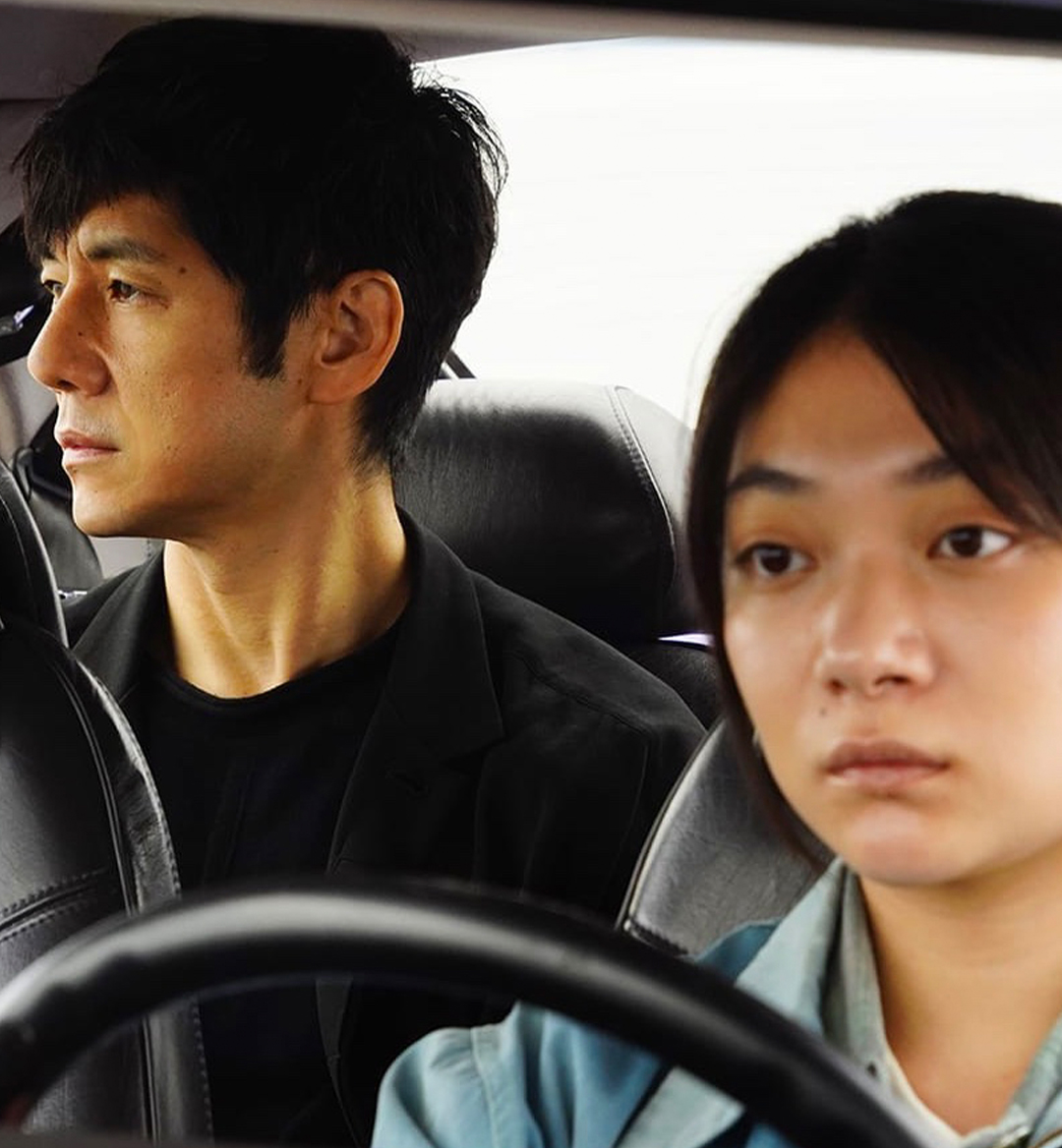 In this car, we raise cigarettes out the sunroof, not peace signs.

In the same way that Toni Morrison's novel, Beloved, throws you right into the story, sans explanation, Drive My Car progresses in just about the same way. It's like walking around without glasses for a bit—you can only vaguely see everything and kind of understand what's going on, but it isn't until you get further into the story and put on your glasses that things become clearer.

Based on Haruki Murakami's novel of the same name, Drive My Car tracks Yūsuke Kafuku (Hidetoshi Nishijima) both prior to and after his wife, Oto's (Reika Kirishima), sudden and unexpected death. As the fog begins to clear at about one-quarter of the way through, we get a better sense of what's actually going on here.

Kafuku and Oto are both writers involved in the entertainment industry: Kafuku primarily works in the theater, both as an actor and director, while Oto is a well-known screenwriter. The two are very closely bonded, often orally writing screenplays together and physically writing down the dialogue later on. After the death of their four-year-old daughter, their bond became even closer as they needed each other to go on with their lives following the tragedy.

However, as the years went by, Kafuku became aware of Oto's infidelities as she would sometimes bring men to their own home, thinking that Kafuku wasn't there. We see this specifically with a younger actor, Kōji Takatsuki (Masaki Okada), whom Oto had recently introduced to Kafuku. Despite Kafuku knowing about this, he decided not to address it and stayed regardless, fearing a life without her.

The bulk of the film occurs in Hiroshima—two years after Oto's sudden death from a brain hemorrhage—where Kafuku has taken a directing residency at a theater company. He's directing a production of Anton Chekhov's Uncle Vanya, the very same play that he had acted in just before (and had a breakdown during it). Approaching the play from an outside angle, Kafuku is able to see the story in a new light, especially in both leading the auditions for and later deciding on who will be assigned each part in the production.

Upon arriving in Hiroshima, it comes as a shock to Kafuku when he's assigned a driver to drive him to and from work each day. Initially outright dismissing the idea, he's eventually forced to accept the driver as the other program leaders insist. Most people would be excited at the prospect of having their own driver, but Kafuku has a longstanding routine that revolves around driving his beloved old, red car before each rehearsal in order to rehearse his lines. He plays a tape—in which his late wife, Oto, has recorded her readings—and talks aloud in the tape breaks to both get his lines correct and listen to his wife.

Despite Kafuku's skepticism, he's finally introduced to Misaki Watari (Tōko Miura), a 23-year-old woman who becomes his driver. At first not trusting her with his car or with her driving skills probably because of her overly-casual (and chain-smoking) demeanor, Kafuku—over time—admits that she's the most talented driver he's ever seen, making the car practically defy gravity with the lack of bumps or disturbances on each ride.

Kafuku has her play the cassette tapes of dialogue and the two would listen in silence on each trip, though upon getting to know one another, they began to talk—sparsely at first, yet after learning more about the deep parts of each other's pasts, the talking began to drown out the tape. 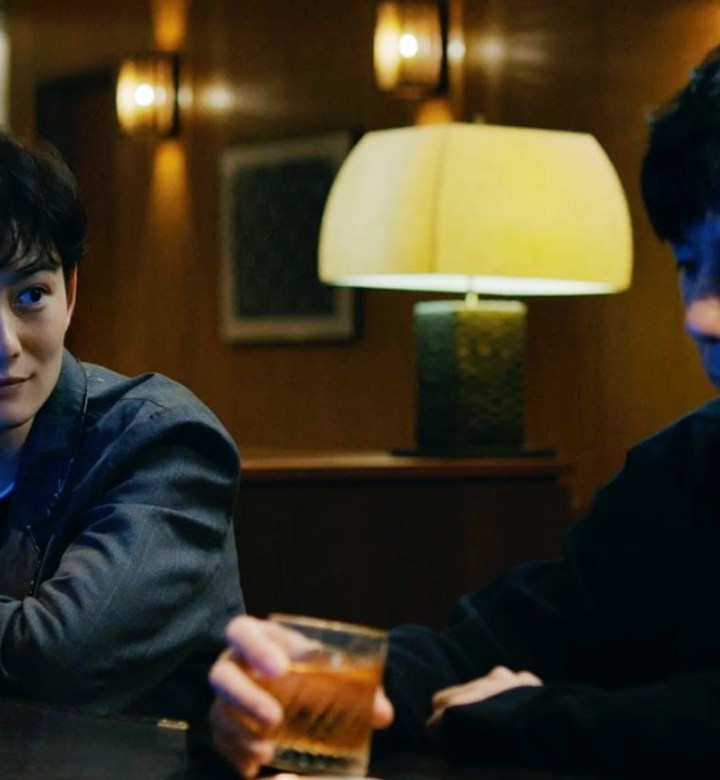 While exploring the growing friendship between Kafuku and Watari, the film also focuses on Kafuku's life at the theater company. The very same man whom he had caught sleeping with his wife, Takatsuki, shows up for the audition and gives a well-done yet physically aggressive performance. In addition to him, many actors, spanning a wide array of countries, audition for various roles, yet once at the end of the audition, Kafuku is left with the tough task of assigning each part.

Kafuku assigned Takatsuki the toughest part of all: Uncle Vanya, who Kafuku himself had played before. Confused about why he had been given the role of a man much older in age than he is, it quickly became more obvious as to why Takatsuki was given that role. Through watching intently as the group goes rehearses each line over and over again, it becomes clear that there are major parallels between the story of Uncle Vanya and that of Kafuku as well as Takasuki.

The film's director, Ryusuke Hamaguchi, did an outstanding job of giving you just enough information to still be engaged with the film without giving away too much at the beginning. By leaving viewers a bit in the dark, it provides an almost psychological and mysterious aspect of the film that wouldn't have been there otherwise. 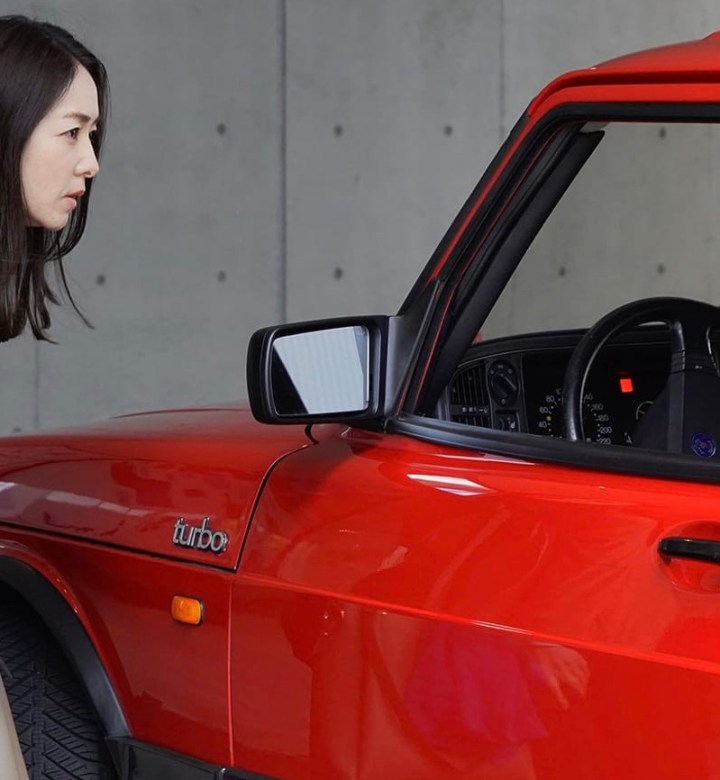 Clocking in at just under three hours, the film is definitely a bit on the longer side. While an intermission would've been nice about halfway through the film, there's not a specific set of scenes that could've been cut. Because one of the main points of the film seemed to be to actually get to know the characters as you would in real life, and in doing so, it takes a bit of time to build up that understanding.

In that sense, what this film truly nails is the ever-changing nature of the human connection. Sure, Drive My Car is also about the technical side of the theater, but by focusing on the actual words in the dialogue—and by staying on those words and repeating them—we're able to see connections that we would've never seen had the director glossed over those moments.

The last hour of the film specifically was done with the utmost care, as Kafuku and Watari get to the point where they truly understand each other. Even their friendship ends up overlapping with the play, and as she watches the performance live in the theater, you can almost see all of the moving pieces in her head clicking right into place.

As it's nominated for Best Picture at the Academy Awards, it'll be interesting to see how the film measures up to the others nominated, as that it's coming off a win for Best Foreign Language Film at the Golden Globes as well as earning a ton of other awards at Cannes and other festivals. On top of Best Picture, Hamaguchi is also up for Best Director, along with Best Adapted Screenplay and Best International Feature Film.

While dialogue-heavy films are sometimes overtaken by their own words, Drive My Car finds its own groove in a way that doesn't feel as oppressive as other movies have felt. Each word leaves you wanting to hear another, just as Kafuku feels in replaying those beloved cassette tapes over and over.