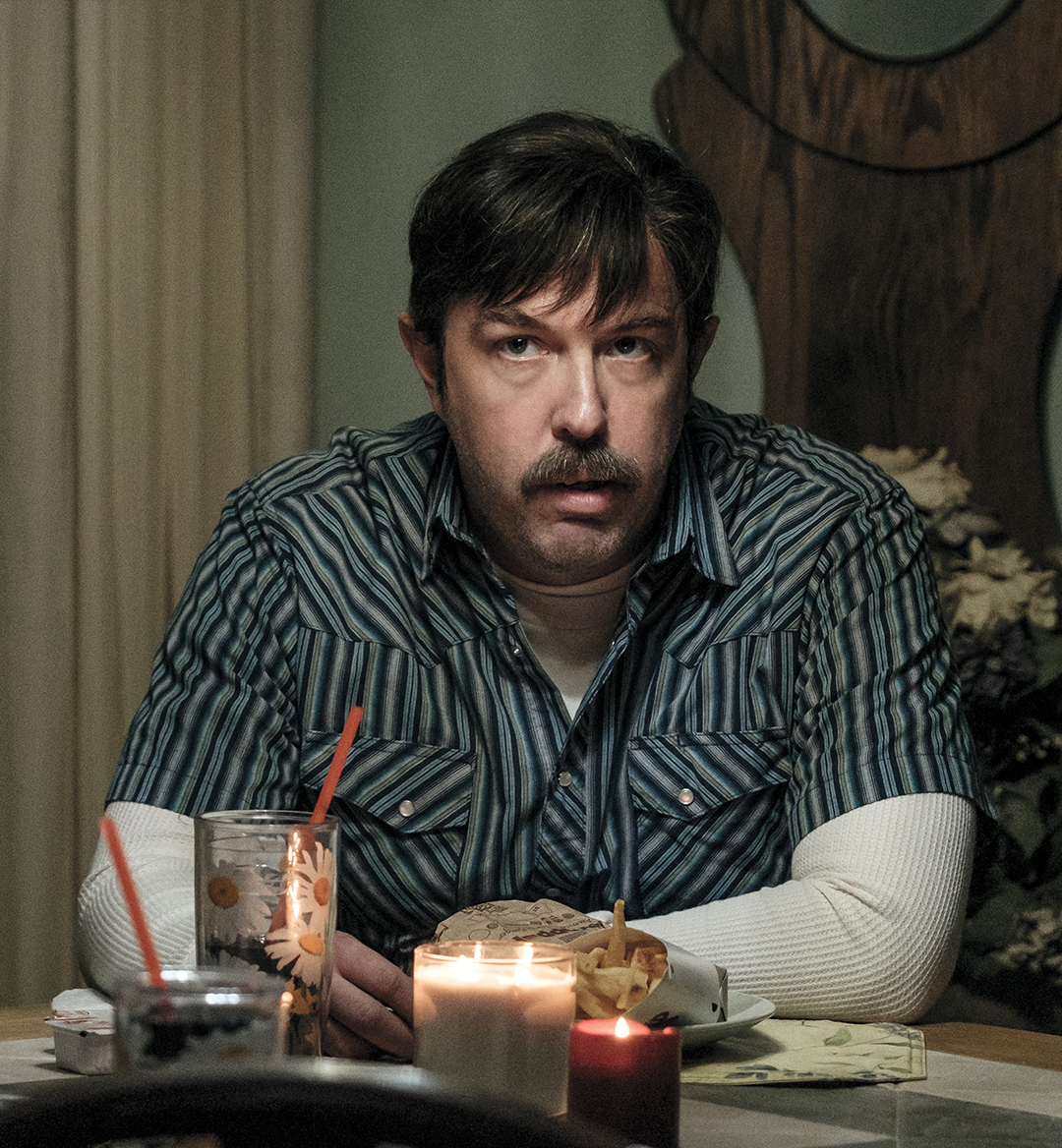 You know Eric Lange from his roles on Lost and Narcos, but you might not recognize the 45-year-old actor in Showtime's new prison break potboiler Escape at Dannemora. That's because Lange put on an impressive 40 lbs. for his character, Lyle Mitchell, a bumbling sweetie pie married to Tilly, played by Patricia Arquette.

Based on a true story, Escape at Dannemora follows Tilly as she helps a pair of inmates escape a maximum security prison. She’s got a crush on inmate Sweat, whom she's boinking in the back of the workroom. Her husband, unawares, just thinks they're growing apart, and he plays the role so purely that you can't help but feel sympathetic toward his Lennie Small-type dweeb. Directed by Ben Stiller, it's like Prison Break meets Fargo with a heavy seasoning of tension.

Lange kept the weight on for seven months and even wore fake Austin Powers teeth to get into character as Lyle. Arquette, too, gained 40 lbs. for the project, but the media seems more interested in discussing how men gain and lose for award-winning roles. Over FaceTime, Lange discussed how he slipped into character and how he feels the real-life Lyle may react to his skillful portrayal.

Why watch Escape at Dannemora?

Eric Lange: What I think is interesting about it, is it's like three small movies: It starts out a prison movie, and you’re in a prison with some tangential stuff to a family outside of prison. And then it’s like Shawshank Redemption—it’s about breaking out of a prison. But you still have the family in the background. And then it’s like an escape movie. They’re running through the woods. And in the middle of all of it are these human beings making choices and some of them are horrible, sloppy choices, these are the consequences of these choices.

The character is based on a real guy. How did you get into character?

Lange: I went into a makeup store called Cinema Secrets in LA and showed them a video of Lyle [Mitchell] and said, “I need to be this guy.” We went to a wall of fake teeth, with all these different options. What we ended up grabbing were the "Austin Powers" teeth. That is really all there is.

[Mitchell] was really angry at the media for broadcasting what was happening to him and his wife. I watched that video a thousand times, I took the audio from the video to listen to in the car, and beyond that, I took some creative license. He never wanted to meet me, and I respect that. You have some license to then round out the character with the parts unknown. The writers fleshed him out the rest of the way.

How do you think he will react to your interpretation of him?

Lange: I don’t know. Often when you play someone who is alive, they may or may not be happy with what you think they are. When you don’t have to meet the person, it frees you from that judgment. I’m sure he’ll have a reaction after the show comes out. I think we did a really good job in showing all the positive things about him. And at the end of the show, he’s one of the only people not dead or in prison, so maybe he knows something we don’t. 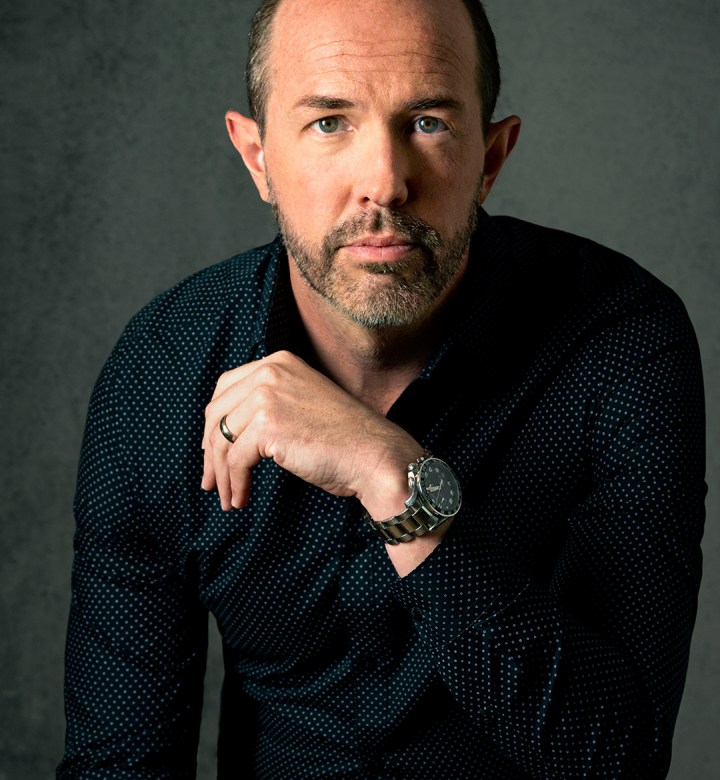 Was putting on 40 lbs. for the role difficult?

Lange: You think it would be fun to be able to eat whatever you want. And the first week it was! But then, your body starts to react and the sweat starts to form and you start to have acid reflux. You buy different clothes, you walk differently. It changes your psyche when you so quickly gain all this weight. And then I had to keep the weight on for about seven months. By the end of it, it was a costume I was really ready to shed. So now I’ve lost it all again. It was totally key to the part, but I’m not sure I’d want to do it again. I had some good pasta, some beer and some Häagen-Dazs.

Patricia Arquette also gained 40 lbs. You’re both unrecognizable. It's interesting though that people bang on about Christian Bale gaining weight for Dick Cheney or Michael B. Jordan getting ripped for Creed II, but nothing much about when women make these transformations.

Lange: When men transform it’s art. When women transform it’s, “Wow, she let herself look that ugly.” They’re always supposed to be gorgeous and glamorous, and when they do something else, it’s brave. It’s still art. I admire the hell out of Charlize Theron in Monster. Not a ton of others are coming to mind, but I don’t think it happens that often. I really credit Patricia. There is a double standard in Hollywood.

What was it like with Ben Stiller as a director?

Lange: Ben is a perfectionist. He is obsessed with getting every detail correct. I’m kind of a control freak and a perfectionist myself, so I felt a lot of trust in that. From what was on the set in front of us, to the costumes and makeup, to the whole arc of the narrative, I knew he always had his eye on it. And that’s really reassuring when you’re playing someone like Lyle and you’re so far out on a limb.

I really dig the fact that he is also an actor. And because of that, he really does understand. There are moments when I’d come over to him and say, “Am I way too big in this thing?” When you question your performance, it’s nice to have an actor’s perspective on it, not only a director. He excels at both, I think what he has made here is really special.

Did you and Patricia bond before you had to play a married couple on screen?

Lange: We had never met. We jumped in, and day one was a rather big scene at the Chinese restaurant. That was our first day working together and it is almost the end of the arc of the show. Our first day was trial by fire for both of us. But she’s so easy and down to earth and I have such respect for her as an actor. She put me at ease the minute I met her. She is a human being. The whole cast was that way, Ben as well. They’re big figures in our business, as actors, it’s great company to be in.