You'll never look at an everything bagel the same way again. 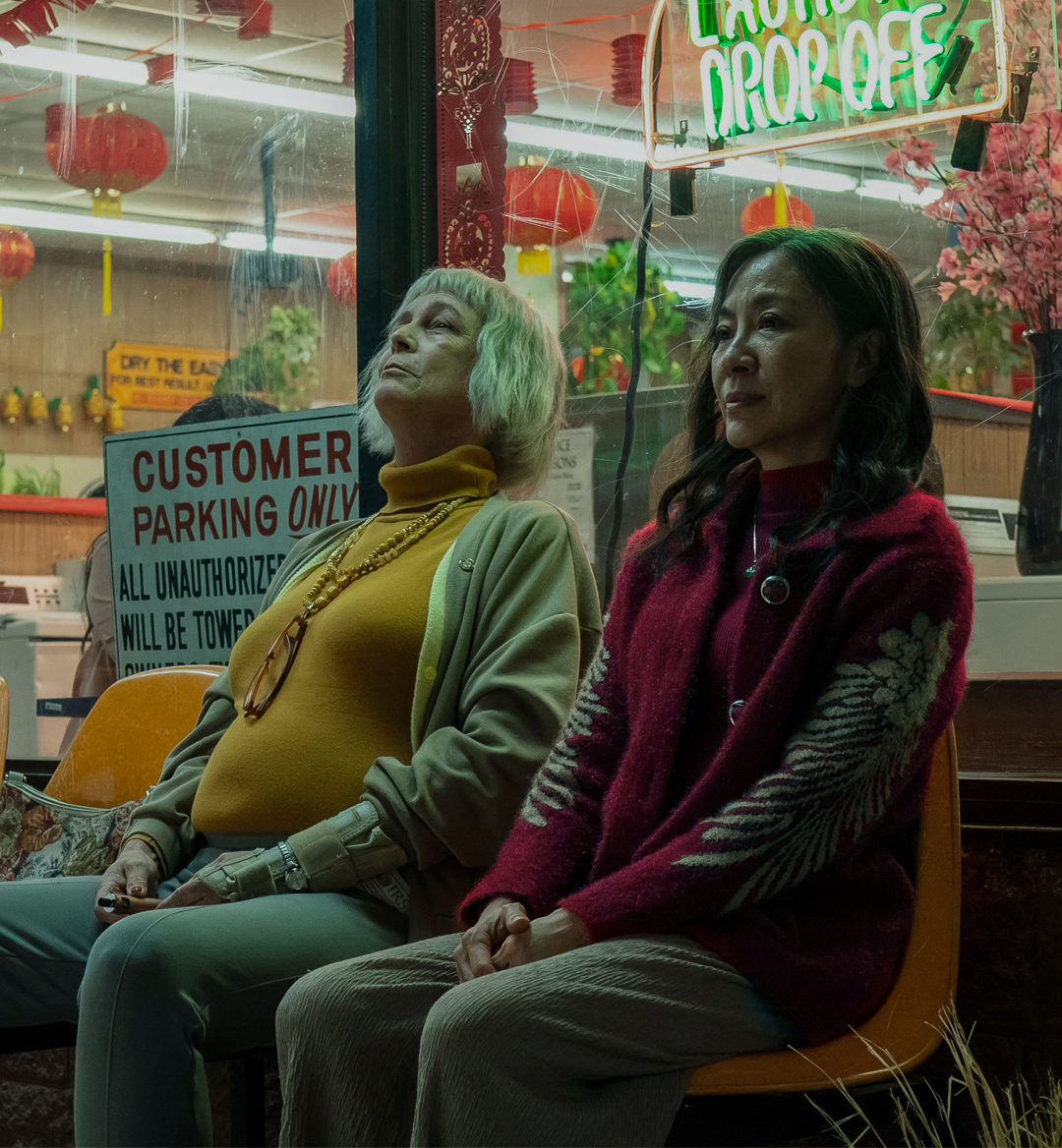 Every so often, a movie comes along that leaves you speechless. As you eat your popcorn and drink your soda, you follow along as your mind attempts to process everything you've witnessed.

"Was what I just saw actually good? Was it bad? Do I even understand what the hell just happened?"

These are the questions I asked myself as I left the theater after seeing Everything Everywhere All at Once, the new mind-bending multiverse film starring Michelle Yeoh.

Everything Everywhere All at Once follows a woman named Evelyn Wang (Michelle Yeoh), who, along with her husband Waymond (Ke Huy Quan,) runs a struggling laundromat. The IRS is auditing them because Evelyn makes mistakes while filing their taxes. Waymond is attempting to deliver divorce papers. Evelyn's father, Gong Gong (James Hong), has recently arrived from China. Oh, and Evelyn and Waymond's daughter Joy has been attempting to get Evelyn to understand Joy's relationship with her girlfriend, Becky.

Needless to say, stress levels in the Wang household are at an all-time high.

When they arrive at the IRS office, Waymond is suddenly taken over by a different version of himself, the "Alpha" Waymond from another universe who is, well, a badass. Martial Arts master and chief exposition deliverer, Waymond serves as Evelyn's guide through the multiverse.

After he defeats a group of security guards (with nothing but a fanny pack, no less!), the film's events are set in motion. 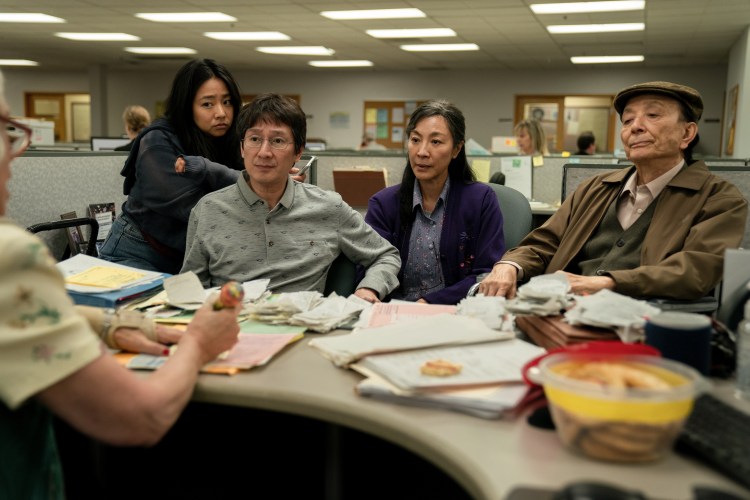 Multiverse movies seem to be all the rage right now in Hollywood, well, at least in the comic book movie industry. Dr. Strange and the Multiverse of Madness premieres in May, Spider-Man: No Way Home was a critical and commercial success, DC's upcoming The Flash film, and Spider-Man: Into the Spider-Verse are just some of the entries that have used this idea as a plot device.

One of the biggest issues people seem to have with movies these days is that nothing feels original, and it's a fair criticism. Most films that dominate at the box office are, as Martin Scorsese would put it, "theme park rides." It's a Marvel movie, a DC film, or any of the other massively successful franchises that people either love, tolerate, or have grown to hate.

Many films that use this narrative tend to struggle under the weight of it. The comic book films that have used it are lucky enough to have the franchises they are a part of to fall back on, should they fail. If it doesn't, then the ability to pivot back to what works and what people expect is not difficult.

So, how does an original IP like Everything Everywhere All at Once set itself apart from the rest? Like the others, it relies on a similar narrative device, uses impressive and outlandish special effects, and probably leads to just as many questions as it does answers.

This movie succeeds because it is, at its heart, a film about the power and importance of family and the struggle of remaining optimistic in the face of unending disappointment and nihilistic attitudes towards life and love.

Life beats you down, but even if it does, the ones that love you will always be there to pick you up when you fall. In the words of modern-day poet and philosopher Dominic Toretto, "You don't turn your back on family, even when they do." 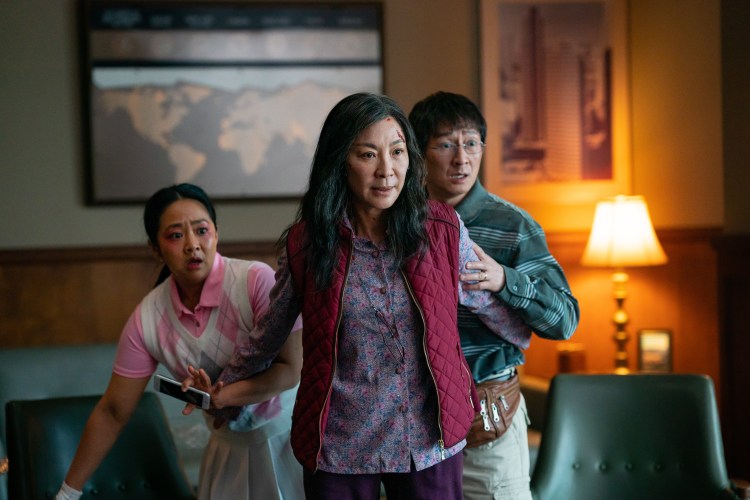 Despite traversing multiple worlds, lives, dimensions, and universes, one thing holds true: actions will always have consequences. It can be in a universe where we exist only as rocks with googly eyes or one where everyone has hot dogs for fingers, we will bear the brunt of what we've done.

It's here that Evelyn's story becomes immediately and intimately familiar. We all wish we could go back and fix things we've done in the past; try to change what will come because we already know what the future holds. It's an unfortunate truth that we all must face. We can't change the past, but we can try to make sure that it doesn't screw up the future. 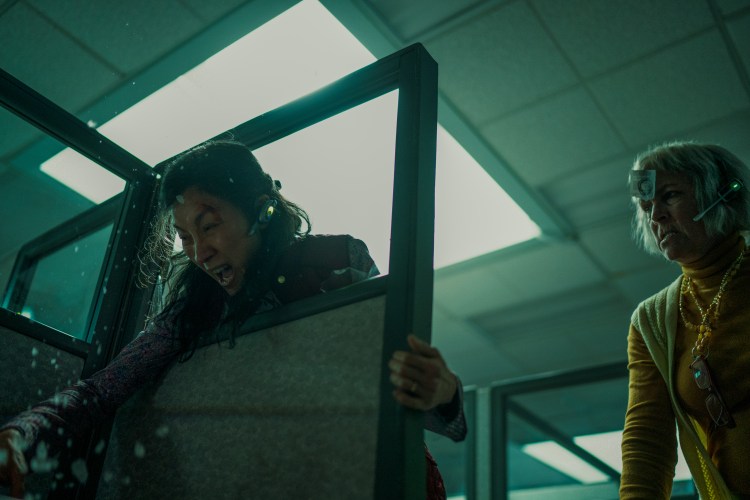 Everything Everywhere All at Once is a trippy, mind-bending adventure but its charm, humor, and relatability are what help it succeed. Michelle Yeoh carries this film on her back and is more than up to the task. This should come as no surprise as she has been an icon of cinema for many, many years, and it is movies like this that showcase why.

For someone that hasn't acted in almost 20 years, Ke Huy Quan crushes his role as Waymond. Like Yeoh (and all the actors, for that matter), the performance rides on his ability to quickly transition between one character and another. Alpha Waymond is the martial arts master; then there is the Waymond from another universe that never marries Evelyn; and the Waymond we know who, despite loving Evelyn, attempts to divorce her.

He is the one that keeps her grounded in her own universe and serves as the support system as she battles her way through the multiverse. 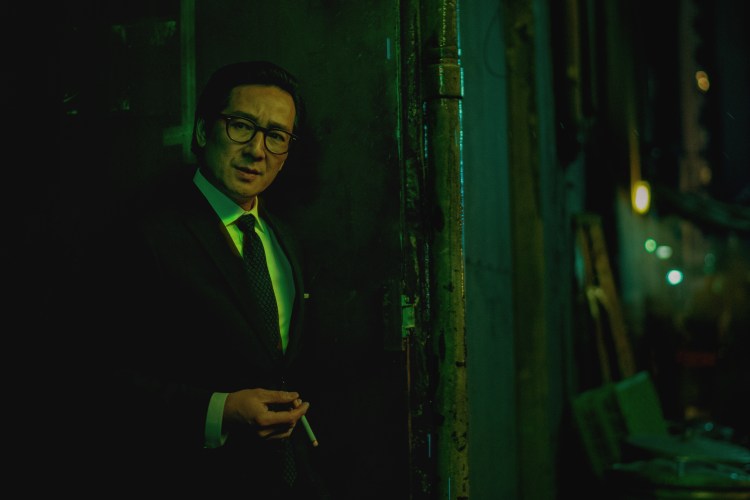 While other big blockbuster multiverse films are on the horizon, Everything Everywhere All at Once is a movie that all should see. It truly has something for everyone: Humor, emotion, an original storyline, and more.

Sure, you might walk out of it more confused than when you entered, but you won't regret taking a bite out of that chapstick and embracing the chaos that follows.