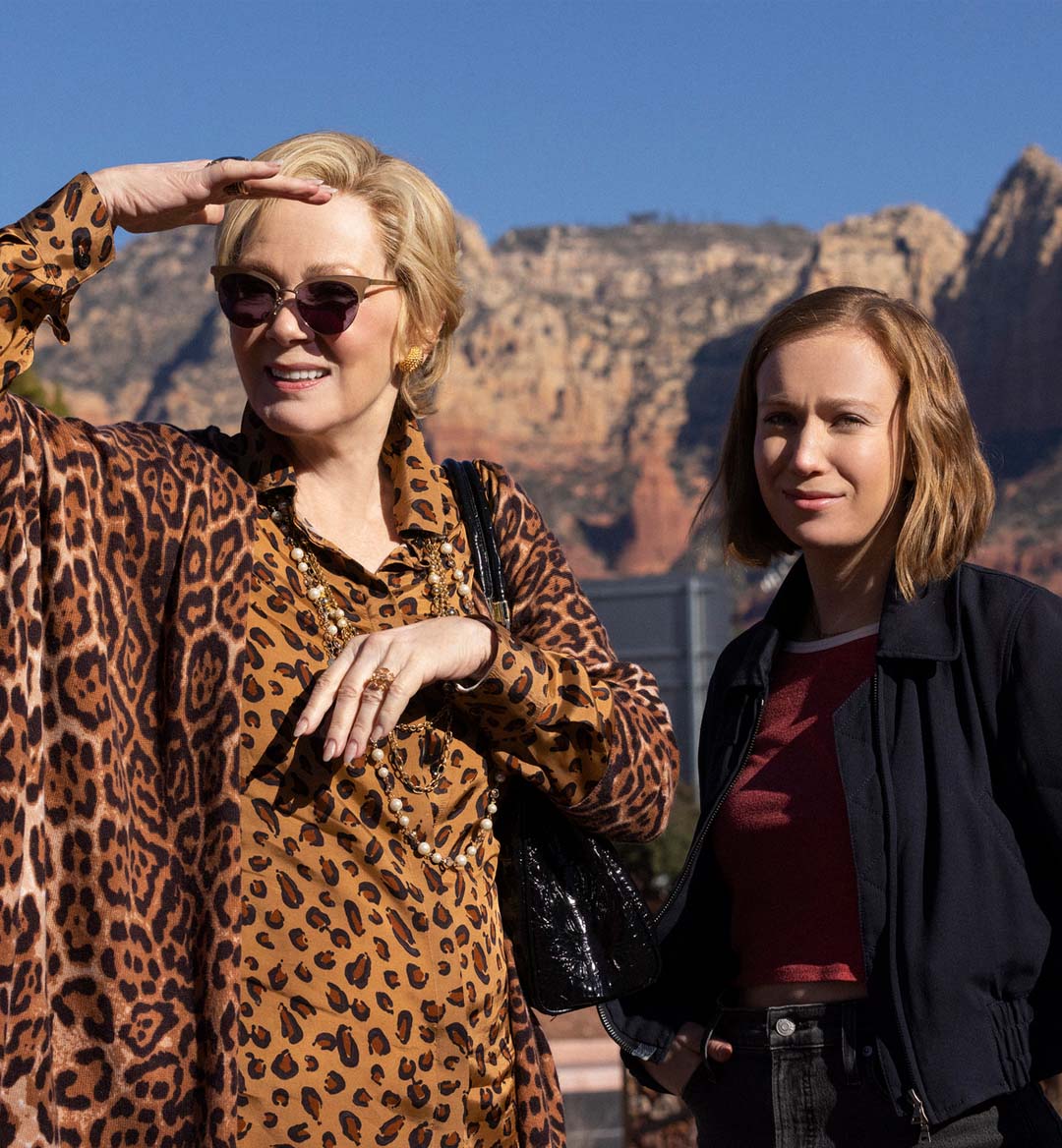 Jean Smart and Hannah Einbinder came bursting onto our television screens once again with two new episodes of Hacks on May 12. Season one was a massive hit, earning Smart an Emmy for her portrayal of the iconic comedian, Deborah Vance.

Opposite of her is Einbinder, who plays Ava Daniels, a young comedy writer who was thrown into Deborah's orbit because she was semi-canceled for a dumb tweet. Joining the team as a writer in an effort to revive Vance's career, Ava really didn't know what she was walking into.

Basically, Hacks didn't even leave us on a cliffhanger in the season one finale—they threw us straight off the cliff. Deborah had shown up at Ava's father's funeral and the two finally had a chance to sit down and connect, which resulted in Ava agreeing to come back to work for her.

Although Deborah's show with new material flopped and she was thrown out of her residency at the Palmetto in Las Vegas, she decided to double down and forge ahead with Ava. Just as their plane leaves the tarmac for Las Vegas, Ava receives some news that makes just about all of the progress she and Deborah have made practically moot.

After Ava quit working for Deborah, she sent an extremely revealing email about her to a few writers she had met with for a TV writing job that she was being considered for. Though she declined the job because the subject of the show is about a female prime minister "who is a bitch," the writers are still planning to use what Ava sent them about Deborah for material on their show. If that got out to Deborah—well, I don't even need to finish that sentence. 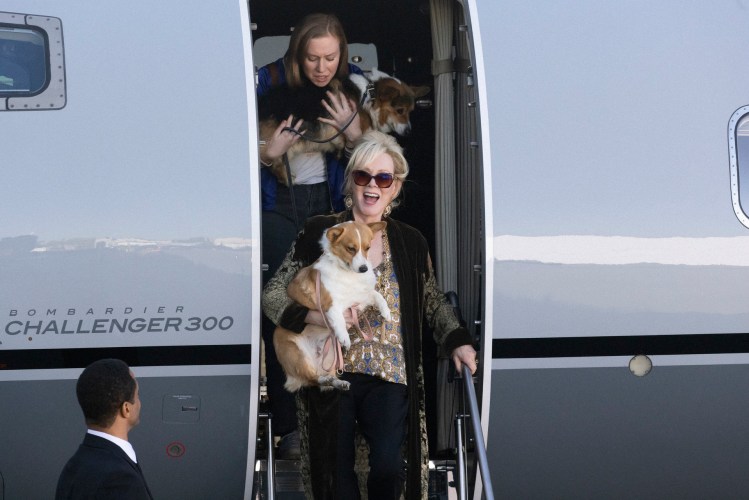 In Deborah's mind, everything in her life is just FANTASTIC right now. She's amped up to get back on the road for her tour, she's excited to start writing more material with Ava, and she gets to tote around a chubby corgi (seen above).

That photo perfectly captures Deborah and Ava's relationship at the moment: Deborah is all blissful smiles while Ava is struggling behind her, attempting to get down the stairs while carrying around the other chubby corgi. In this sense, the chubby corgi is the massive lie that's about to burst at any moment.

Ava's manager, Jimmy LuSaque (Paul W. Downs) finds himself in charge of making that email remain private, though he ends up falling down quite a few rabbit holes in attempts to make that happen. 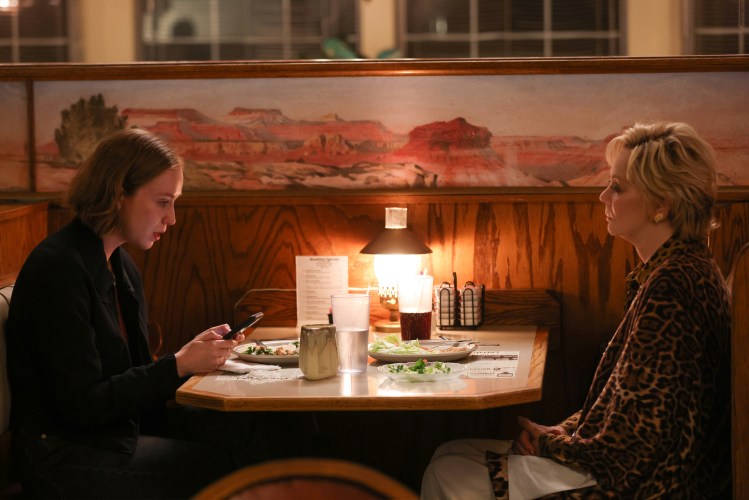 For one-and-a-half episodes, Ava was able to hold out on the truth with her lie tightly packed away. With each insinuation of Ava's inherent "good" and truthfulness, a crack would form, and ultimately it just became too much for her to keep in any longer.

She chose a fairly poor location to tell Deborah the news: in a crystal shop. Being that Deborah is Deborah, she decides to take every rock around her and fire at Ava, who attempts to duck as each one whizzes past her head. At one point, the shop owner even yells, "not the tourmaline!"

Right after this happens, Jimmy alerts Ava that he was able to get the writers to stop the email from being used or distributed, but he was just about an hour too late.

Later on that night after the crystal-throwing intermission, Deborah stops by Ava's room and the two grab some late-night eats at a local diner. Towards the end of the meal, she forces Ava to painfully read over each sentence of the email she originally sent to the writers. Some highlights include:

"She once asked me to perjure myself for her in traffic court."

"She once refused an employee maternity leave because she thought the baby was ugly and said, 'Why would she want to be at home with that thing?'"

But then there was this:

"The truth is, Deborah Vance is a bully—and the worst kind. One who thinks she's the victim. Every person in her life is on her payroll and would never be around her if their livelihoods didn't depend on it—myself included. It's her own fault she's so lonely. Though she's too selfish to ever admit it, I think that's why she needs her adoring fans: because no one in her life actually loves her."

Somehow holding together the probable urge to throw condiments at her, all Deborah did was instruct her to pay the check. And then drove Ava home, but not before laying down a massive truth right in front of her face.

"You know, you're good at writing for me," Deborah says. "And I thought it was because you understood me. But it's because you're just like me. You're as selfish and cruel as I am."

The next day, Deborah picks up Ava from the hotel in her car with a coffee in tow that she got especially for Ava.

"It's not poisoned," Deborah says to her as she skeptically sniffs the coffee.

Okay, things are good now? I guess Deborah's just going to blow this whole thing off as something that just happened out of anger. But wait—not so fast.

After Deborah tells Ava that it's basically water under the bridge and that they'll continue working together for the new tour, Ava gets a call from Jimmy who tells her that Deborah is suing her for violating her NDA.

"Haven't you ever been in litigation before?" Deborah cheerfully asks Ava. "It'll be a good learning experience for you—an expensive one, too."

Sure, Hacks might be a series about a comedian, but it's not always funny—at times, it's actually just the opposite. And maybe that's the point.

I remember when the season one trailer first dropped back in 2021: it seemed like Hacks was going to be the greatest, funniest show that any of us had ever seen, not to mention it was starring Jean Smart, who was having quite a moment in the spotlight having just come off of Watchmen and Mare of Easttown.

When the episodes started releasing, I was kind of angry with myself for not liking it more—was I missing something? I found Einbinder's character to be pretty obnoxious in the beginning and it took multiple episodes for the two to develop a relationship, which is when I started actually appreciating the show a bit more.

Season one of Hacks needed time to grow, mirroring how long it took on screen for Deborah and Ava to understand each other. While it would've been nice for that to have happened in, I don't know, the second episode instead of the sixth, it's easier to look back now and appreciate the real amount of time it takes for two humans to actually get along with each other. In that sense, this show is more about humanity than anything else, getting into the emotional guts of friendship.

I also had to remind myself quite a few times that this isn't a comedy—it's a dramedy, and there actually is a large difference between the two. This one almost errs more on the side of drama, though sprinkled throughout are tons of insanely funny moments and lines.

With this second season, we're already in a good groove: we know the characters, we understand the dynamic, and now we can fully move forward with the plot. But given the massive bomb that was just dropped at the end of the second episode, it seems like we've got a ways to go before we get to any sort of normality between Deborah and Ava.