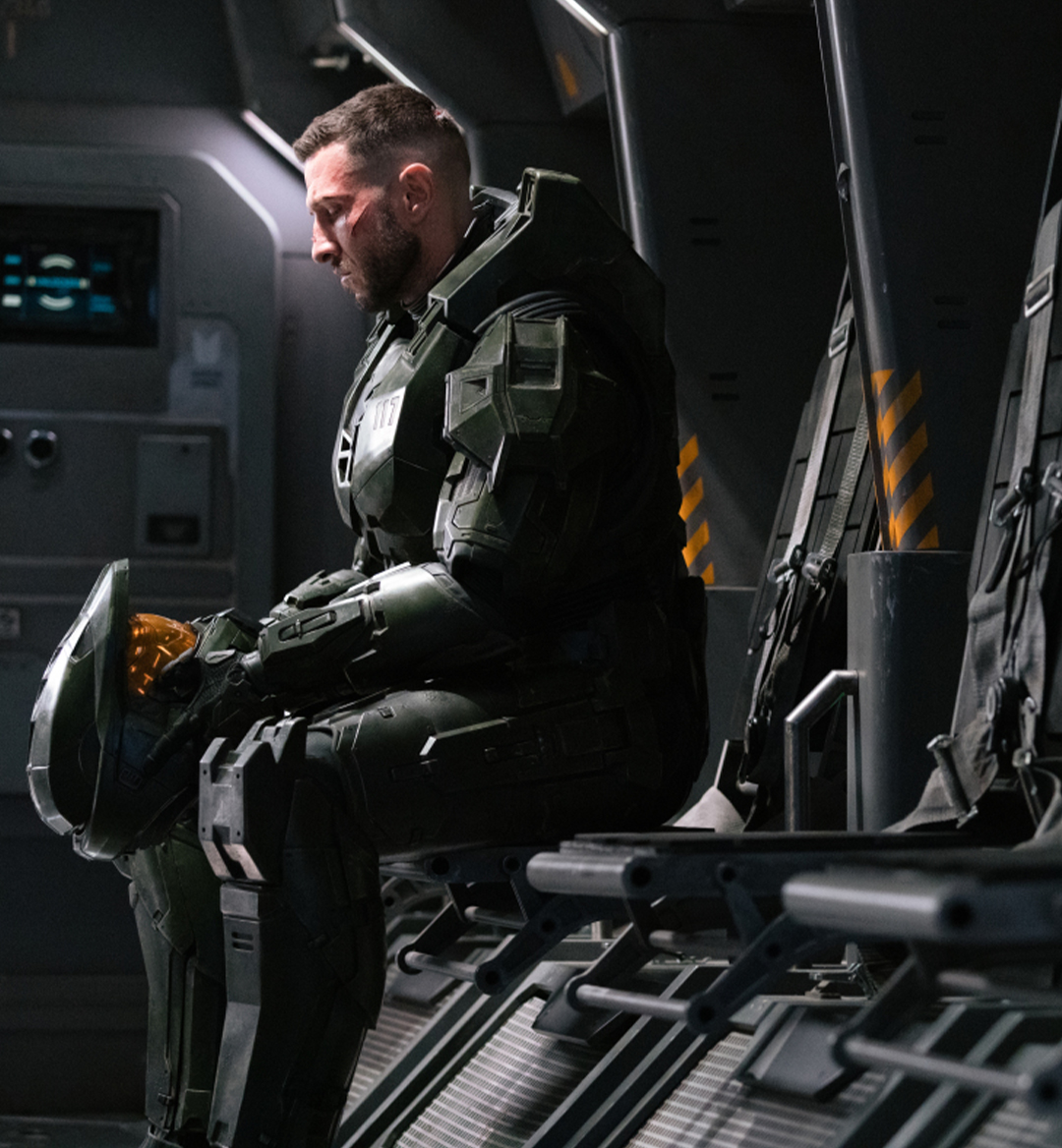 Peeps, we made it. We actually made it through Halo.

I know I've joked quite a bit about how this show isn't the greatest thing in the world and that it's kind of all over the place sometimes, but after watching the finale, it wasn't bad. If I had to give it some sort of rating, I'd say that it was fine. Granted, I went into this show knowing barely anything about the Halo franchise except for the fact that Needlers are cool—but still. If I were a devoted fan of the series, however, I'd feel pretty let down and confused that the show was already renewed for a second season.

In a strange sense, I feel the same way about this show as SpongeBob did after he had unknowingly eaten a pie-bomb that Squidward accidentally gave him.

Continuing where things left off from last week's episode of Halo, the final episode of this season doesn't end things on a period; instead, it leaves us with a big ole question mark. 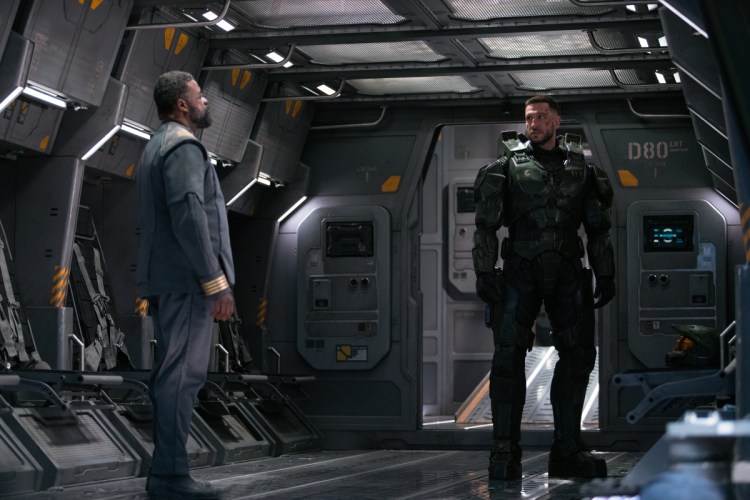 In picking up from where we left off with Master Chief thrown into the calm meadow once again, he apparently slept through quite a bit of the fight, as he wakes up in a war scene with everything around him practically destroyed, including Kai, who's lying on the ground looking practically dead.

"Chief, I'm okay," is what she's able to barely mutter before he wanders off into the next room to figure out what's going on. There, he encounters Vannak and Riz holding guns to Kai's head (um, how are you seemingly alive and well and how did you get here?).

Chief tells Vannak that they were all kidnapped as kids and had their memories wiped by Dr. Halsey, but he's not believing anything out of Chief's mouth. With the guns turned on him now, Kai chimes in and attempts to get the others to believe him, but it isn't until Captain Keyes walks into the room and backs Chief up that Vannak and Riz come to their senses.

With Makee apparently on the loose with the keystones in tow, Chief convinces everyone to work together towards the main goal: to stop Makee from leaving the premises. On top of that, they attempt to stop Dr. Halsey, as well, who's also fleeing the UNSC base on a stolen ship. Though Kai was able to remarkably make it onto that ship, Halsey was able to jump ship in an escape pod at the last second. Later on, the UNSC locate Halsey and take her into custody. Oh, and Makee was able to get away, which means that the Spartans will have to figure out where the Covenant's base is and locate the keystones.

Halsey is only in custody briefly, dying quickly after losing control of her body. However, Dr. Keyes remembers that when her mother would flash clone the baby-Spartans, they would also die in a similar manner, which means that Halsey flash cloned herself and was not actually the woman in custody.

With Makee on the run, Chief takes the reins of a UNSC ship and—with Cortana's help—attempts to figure out just where Makee and the keystones are. Knowing only small tidbits of information about their possible locale, Cortana pieces them together and finds a destination. The only problem? They might not even be able to make it to that part of the galaxy as gravity has started to pull them in different directions. Ah, the beauty of space.

I didn't play the Halo video game campaigns, but damn Master Chief, who knew you were such a good pilot? You go Glen Coco! I mean, he just flew through a random part of space while basically being split in half by gravity and all he got was nothing. Well, he didn't die, so I guess that counts as something.

Anyway, instead of landing the aircraft, the Spartans decide to jump out of the ship and land on the planet that way. But when they land on the ground, they land in half-kneeling positions—how is that physically possible? No broken knees? Or death? Okay.

Upon landing, they encounter hundreds of Covenant troops almost immediately, and given that there are only four Spartans, things don't look great. The Spartans are able to hold the Covenant off for some time, but they're taking an absolute beating from the aliens. 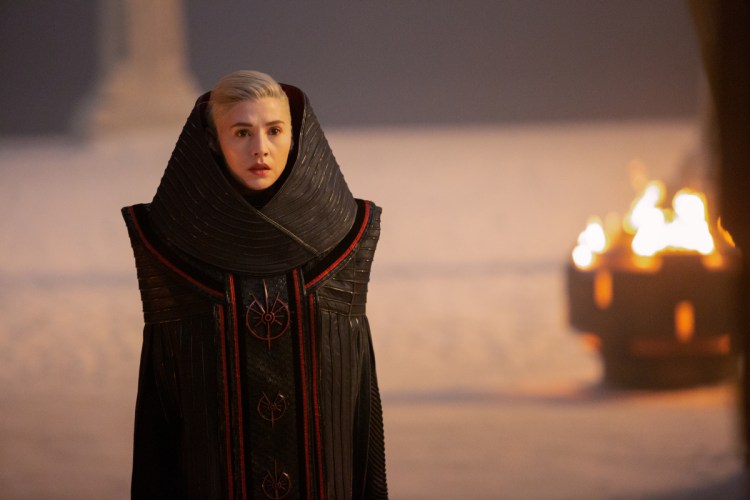 To answer the question above: burrito. There's no way that Makee is a full-on human—she's got something else going on and it's not necessarily Covenant either. But this outfit? Yeah, it basically makes her into a walking burrito.

She decides to touch the keystone to save Chief's life, setting off a massive power explosion that knocks many of the aliens off a cliff. While it does save Chief, it also transports both of them to the beautiful meadow of calmness, where Makee informs him that she wants them both to stay indefinitely. Being that Chief is still very attached to the world below them (and that this fresh meadow is probably just a figment of their imagination), he makes the tough decision to leave her, but before they're able to truly say goodbye, we notice a wound developing in Makee's chest: apparently, she has been shot in real life. RIP Makee, you had a good (ish) run.

As she falls to the ground, Chief is brought back to life and sees who's responsible for killing her: Kai. It seems like she didn't kill Makee because of her relationship with Chief, probably more so because she was part of the Covenant. Oopsie.

Cortana then alerts Chief that there's no possible way for him to be able to retrieve the keystones and save his fellow Spartans, which brings him to an idea: he'll voluntarily be killed by the Covenant so that Cortana can take over his body, save the Spartans, and bring back the keystones. After all, Chief wouldn't have been able to carry the keystones back, anyway, as the second he touched one, it would set them off.

Cortana seems to not have as much faith in herself as Chief does, but she follows his directions and takes over as he's killed in action. As an aside, Cortana should be able to bring him back to life and switch back to her holographic self upon their return, but there might be some kinks she has to work out first. Aware of this issue, Chief still felt that this was the only way to restore some sort of peace to the world.

Acting as Chief, Cortana makes quick work of the Covenant and easily brings the keystones back to the ship, along with the other Spartans. Piloting the plane back to the UNSC, Kai moves her chair closer to Chief's and simply asks, "John, is that you?" With no response from him, Kai certainly knows that something is up.

And finally: the end.

Final Thoughts on the Season

As a whole, the series was fine—wasn't great, wasn't terrible. This final episode was probably the best of the season as it had a constant stream of action and conflict that kept me engaged enough to not pause every five minutes to get up and retrieve a gluten-free Oreo from the other side of the room. However, I did have some issues with the show at large, namely the following:

I want somebody to tell me what exactly the point of including Kwan was when there was zero mention of her not only in many previous episodes but also in the finale. I don't know if the creators originally included her simply to lure in more females to their audience, but making her plot pointless and barely existent aside from the first two episodes of the show didn't do too good of a job of that.

In moving forward, I'd hope that they'd hone in on the parts of the series that were actually interesting to watch, like Chief's relationship with Cortana, all of the action scenes, and Kai's relationship both with Chief and with herself. The more they shine a light on the interesting characters and relationships, the more interesting the show will become.