Meet Some of the Creators Behind the Ambitious New Series, "Halo"

The creativity behind and within Halo has always been tenfold. Outside of the meticulously-crafted campaigns, players could do anything from crafting their own maps and game modes to turning the game into a futuristic Mario Kart—and that's because its creators wanted players to have that freedom. In that same fashion, Halo, the upcoming series, takes things a major step forward by unleashing that creativity even further.

We spoke with actresses Jen Taylor and Yerin Ha and producers Steven Kane and Kiki Wolfkill to discuss quite a few angles of the series, from their writing, producing, and acting standpoints.

While you might not know Jen Taylor, you definitely know Jen Taylor's voice. On top of voicing Cortana on Halo for a casual 20-plus years, Taylor has also been the voice of Princess Peach, Toad, and Toadette—so, yeah, when Peach giddily celebrates after taking you out with a blue shell in Mario Kart, it's Taylor.

"It’s a different beast, right? It’s the same character-slightly tweaked; very similar, slightly different," Taylor said of playing Cortana in this series. "For me, I’m doing motion capture with actors who are doing a live performance, so it’s slightly different—a modality within a modality. I have a lot more technical things that I have to worry about than everybody else does, so it’s fun; it’s another different step for me which I’m really enjoying doing."

In the same way that Taylor has spent over 20 years playing Cortana, she has also gotten to know the character in a way that no one else possibly could. And with that knowledge comes a massive insight into what Cortana both would and wouldn't actually do in the series.

"I definitely had some moments where I said, 'Can we try it this way?' and 'Can I maybe say this instead?' and Steve was very receptive to that," Taylor said. "I definitely feel like I’ve been able to have some input for sure. I mean, not with the plot, but with smaller things, absolutely."

In one of her largest roles to date, Yerin Ha is taking on the starring role of Kwan Ha—a daring rebel who finds herself working alongside Master Chief (Pablo Schreiber) as a new addition to the Halo universe. Given that fans have been waiting years for a series like this, Ha was a newcomer in two senses: in joining this massive franchise and for Kwan herself in the.

In watching the series, Ha's character always feels within reach (pun absolutely intended)—it's easy to tell that Ha's entire heart is in the performance as she blends innate humanity and emotion with a devoted rebel spirit in Kwan. While there were definitely high expectations from fans for the show to succeed, Ha powered past that and focused on the importance of being in the present.

"You know what’s funny, I actually tried to not think about that too much. I did my part in doing the research and reading everything I could about Halo and the universe with my respect and homage to that," Ha said. "There was a point where I kind of had to let it go and focus on Kwan, this new character—what her purpose is, what she’s trying to say, why she’s there in the story, why she’s there with Master Chief—and kind of really focused on that." 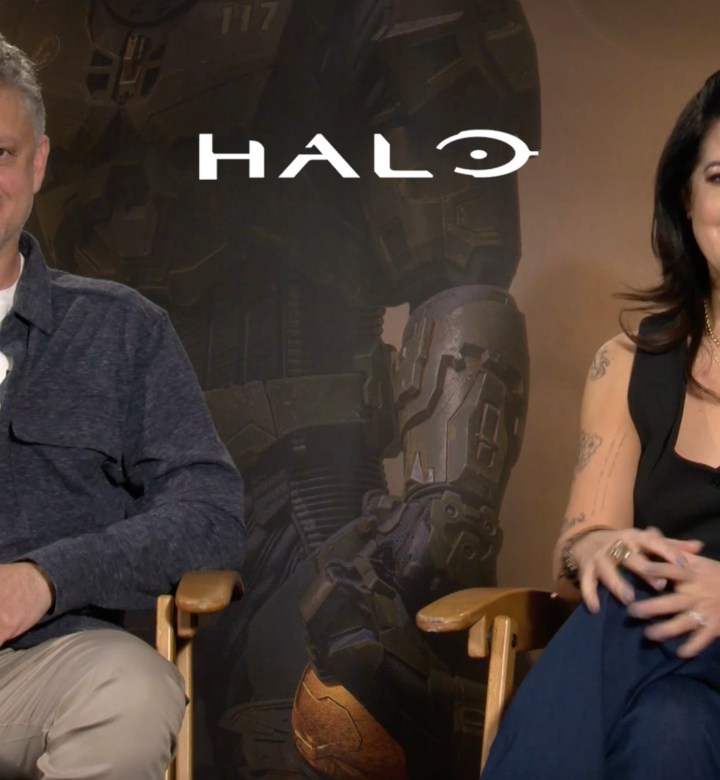 Showrunner, writer, and executive producer Steven Kane had a pretty daunting task ahead of him: Finally adapting Halo for the big screen. Kane has worked on and wrote on the series, The Last Ship, The Closer, and American Dad!, as well as feature films like The Doghouse. As there had been rumors swirling around for years about a possible Halo series or movie in the works, this time, it was for real.

"I think it’s overwhelming at first as the spigot opens up and you get inundated with 20 years of canon. The first thing I did was I went to Seattle for boot camp to get a crash course—not really so much on the game itself, but more so on the ethos behind the game: the themes, the important core values," Kane said. "Focusing foremost on my job as a writer—it's just to tell a good story with characters that you can relate to with a journey that’s compelling. And coming from the outside of 343 [Industries] and outside of the canon, [it's] being a tour guide for the uninitiated, as well, so that even if you don’t know the first thing about canon or about Halo, you’re just watching a good TV show. If you know canon up and down, the rewards are manifold because they’re everywhere; we made sure we serviced that, as well."

Kiki Wolfkill has been in the Halo sphere for quite some time, as she has worked as a video game developer for years, especially with 343 Industries on the Halo franchise, and on this project, she worked as the executive producer. Oh, and she's also a former competitive racecar driver, so she's basically the coolest person ever. In speaking about the previous Halo projects like the animated show Halo: The Fall of Reach and the short film, Halo 4: Forward Unto Dawn, Wolfkill explained her incorporation of those into this new series.

"Those are both really good examples; I think we looked across all of those things. But what I would say is with Halo 4—and I’ve always been particularly passionate about narrative in video games and different narrative structures—we really tried to dig a little more into Chief and his relationship with Cortana and his state of mind; maybe starting to question what his role is as a leader of men (and women) and in the UNSC," Wolfkill said. "That John's story became really important—that’s where eight, nine, 10 hours became super important to a television series. The origin story is super-critical for John’s journey: him understanding, recognizing, and reconciling where he came from was really important for him moving forward."

Halo premieres on March 24 on Paramount+, with new episodes dropping weekly and it has already been renewed for a second season.