'House of the Dragon' Episode 5 Recap and Review: "We Light the Way" 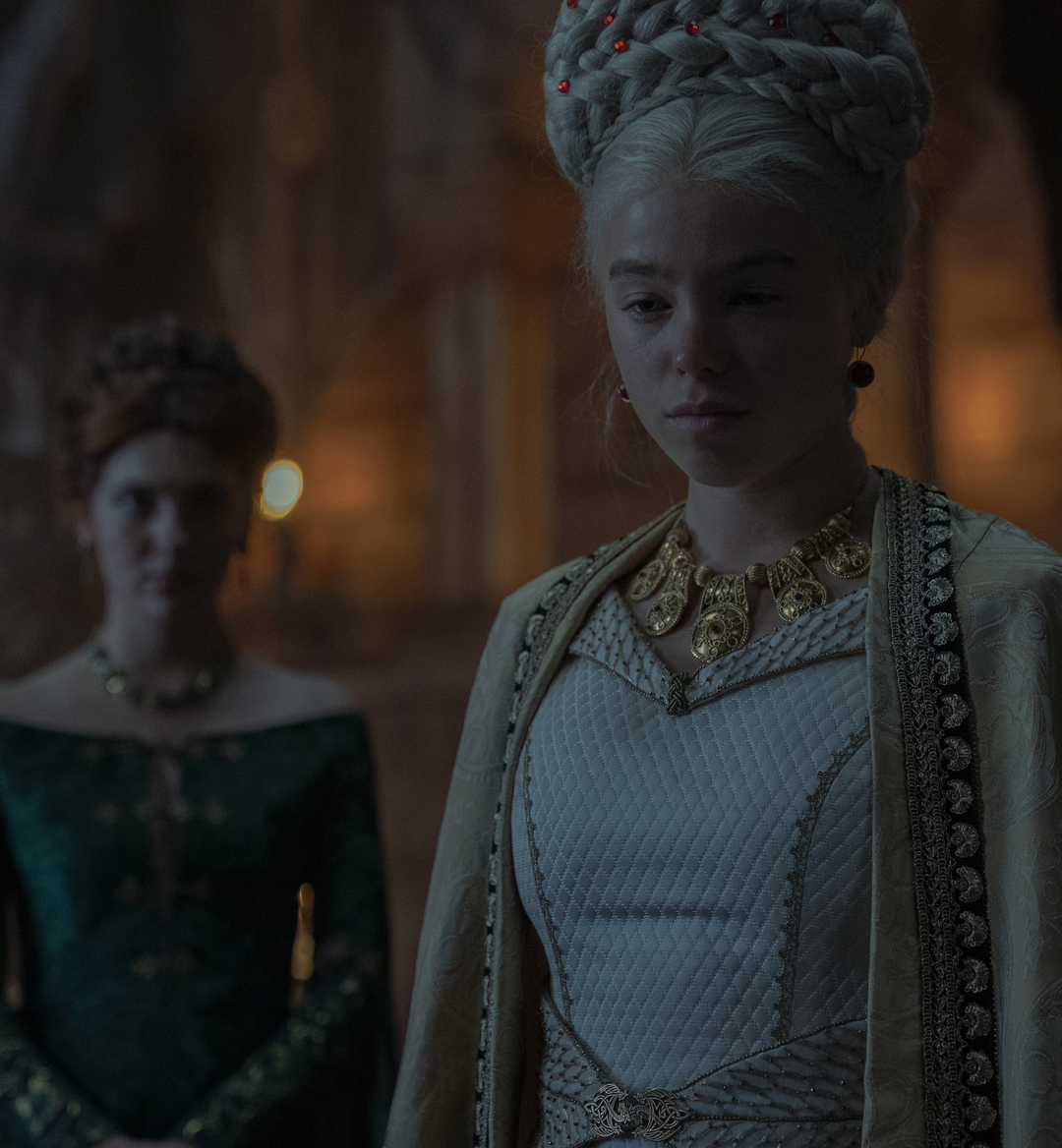 Why can't the people of Westeros ever throw one wedding where things go to plan? I'm beginning to think that both House of the Dragon and Game of Thrones need a new guild of wedding planners.

This week's House of the Dragon, "We Light the Way," picks up in the aftermath of "King of the Narrow Sea," when it was decided that Princess Rhaenyra would marry Laenor Velaryon. By Westerosi standards, it's a smart match, and once the vows are exchanged, everyone will live happily ever after, right? 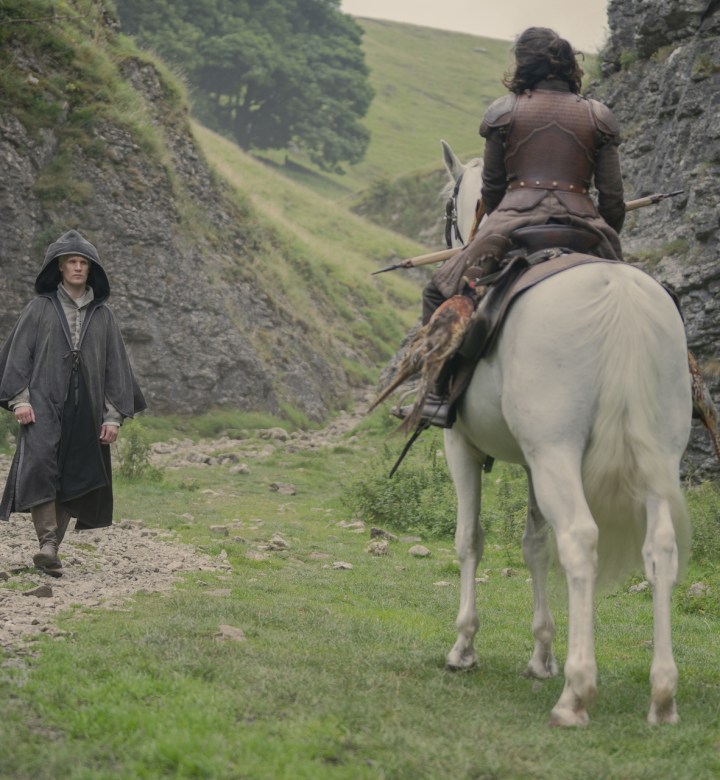 This week begins in the Vale, where we get a chance to finally meet, albeit very briefly, the lady Rhea Royce. The Lady of Runestone, Rhea, is Daemon Targaryen's wife and the "bronze bitch" we've heard about. Clearly, Daemon is not fond of her or the Vale.

As she goes out hunting solo, she comes across Daemon, who had been banished to the Vale (again) by Viserys. Now while it's possible that Daemon went there to seek an annulment of their marriage, that does not happen. Rhea has no love for Daemon either and makes fun of the fact that they haven't consummated their marriage and how Viserys cast him aside in favor of Rhaenyra.

Daemon, ever the wild card, causes her horse to toss her off, and it lands on top of her, breaking her neck and leaving her paralyzed. He begins to walk away, but after she insults him one last time, we see him pick up a rock to finish the job.

Meanwhile, Viserys, Rhaenyra, and the rest of the Royals are on their way to Driftmark to meet with Lord Corlys to arrange the marriage of Rhaenyra and Laenor. Viserys continues to get sicker every week, and Rhaenyra takes notice as her father throws up on the side of the ship, a combination of seasickness and his illness, no doubt.

In King's Landing, Otto prepares to leave the city for good when Alicent stops him. She doesn't want him to go, but Otto has no choice, and he is disappointed with her, saying that she chose Rhaenyra over him and her children. Alicent still believes Rhaenyra, or at the very least wants to believe her, and says that this might not have happened if Otto wasn't so focused on making Aegon heir.

He warns her that if Rhaenyra succeeds Viserys, then war will follow because the Realm will not accept her as Queen. In order to secure her claim, Alicent's kids will need to be killed, a fact that Alicent knows but refuses to believe. She must choose between her friend or the genuine possibility that it is her kids who will suffer the consequences. Otto hugs her before riding off in the rain, leaving Alicent crying in the rain.

In the gardens of King's Landing, Alicent is approached by Larys Strong, the son of the new Hand of the King, Lyonel Strong. They talk about their fathers, and we begin to see that, despite his lack of physical prowess, he has a real talent for manipulation and scheming, a powerful asset in the world of House of the Dragon.

He appears to express concern for Rhaenyra when he mentions that she had a tea delivered to her by the Grand Maester. He makes it seem as if Rhaenyra is sick and that Viserys sent the tea to help her. The news shakes Alicent, who realizes what the tea was likely for and that Rhaenyra had, almost certainly, lied to her.

At Driftmark, Viserys finds no Royal welcome from Corlys or any Velaryons, a slight no doubt. Lady Laena comes to greet him, and Viserys begrudgingly walks inside the castle. While Laena keeps Rhaenyra busy with Laenor, Viserys meets with Corlys and Rhaenys to discuss the potential marriage. They're both able to see how sick Viserys is, which in Westeros always presents an opportunity for some to take advantage of.

They let Viserys know that Rhea Royce has died under suspicious circumstances, given that she was a great rider and hunter. Viserys proposes the marriage of Rhaenyra and Laenor, with Corlys needing a few details ironed out.

Rhaenyra will still be the Queen, and their firstborn child (regardless of gender) will inherit the Iron Throne from her. Corlys asks whether or not, as in keeping with Westorosi tradition, the children would take their father's name. The line of Targaryens will not end, the children will take the Velaryon name, but when they ascend the throne, they will revert to the Targaryen name. Corlys agrees to the compromise.

Rhaenyra and Laenor walk on the beach together, where we find out that Laenor is secretly gay (a fact his parents are aware of.) They agree that they'll do what they need to do as a married couple (produce children, rule, etc.), but they'll be free to do as they please outside of that.

On the ship ride home, Ser Criston professes his love for Rhaenyra, proposing they leave this whole thing behind. They could escape to Dorne, board passage to Essos, and live freely without the constraints of their Royal duties. Laenor was not chosen for her, and she has no feelings for him, so if they fled to Essos, they could get married, and they'd be able to do so for love.

She cares for him but knows that she cannot do what he wants her to do. Rhaenyra attempts to console him by telling him that since she and Laenor have come to their understanding, she and Criston could still be together. Criston took an oath of chastity, and his reputation has now been ruined because of what they did. Rhaenyra attempts to explain why she must do what she is going to do, but Criston leaves. 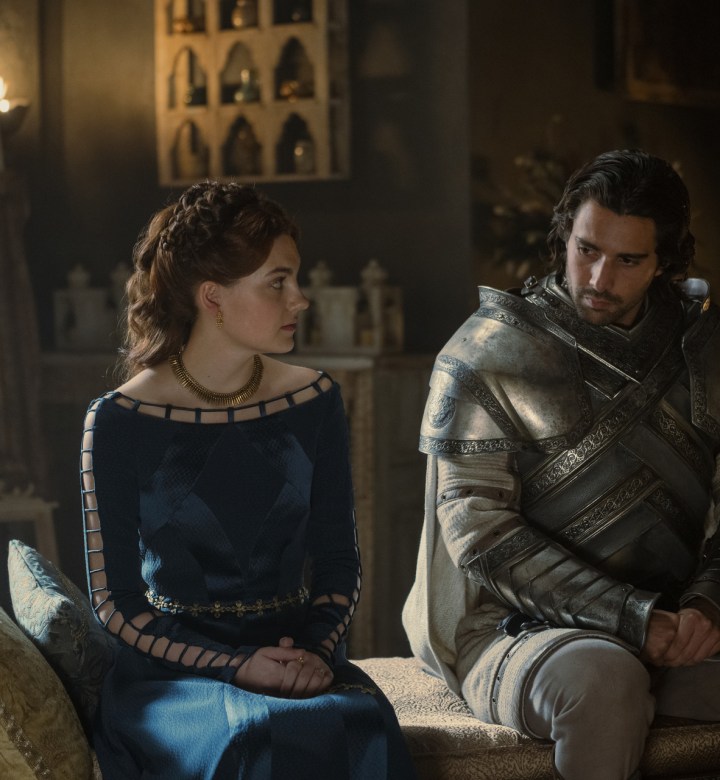 Alicent sees the Royal company arrive back in King's Landing, and Viserys collapses as soon as he exits his carriage. She makes a call for Ser Criston to come to her quarters. Alicent wants to know, once and for all, what happened with Rhaenyra. With him being her sworn protector, he would know what happened on the night in question.

She dances around the question a bit, still nervous about accusing her friend of any wrongdoing. Before she gets a chance to ask the question, Criston admits to sleeping with her. Alicent was still under the impression that it was Daemon who had sex with her. The news catches Alicent off guard and leaves her betrayed.

Ever the honorable man, Criston says while he doesn't deserve her pity, he mercifully asks to be put to death rather than being castrated for his crimes. Alicent doesn't know how to take the news but thanks him for his honesty and dismisses him. They share one last glance of understanding as if to say it's their secret and he'll be fine before he leaves.

In his quarters, Viserys is being treated for his illness and is clearly not doing too hot. He asks Lyonel how he thinks Viserys will be remembered, as his reign has not been marked by anything extraordinary like a war or great battle. Lyonel tells him that his reign has been peaceful, a fact that few Kings can claim. Viserys wonders what the future holds for him as he drifts to sleep.

We then see the Velaryon fleet and dragons arriving at King's Landing for the Wedding. The rest of the Great Houses of Westeros have also arrived, and the welcome feast is filled to the brim with various lords and ladies.

Viserys and Rhaenyra are approached by Gerold Royce, who wishes to speak with them about Rhea's suspicious death. Before he can propose a solution, the Velaryons arrive at the feast with much pomp and circumstance. 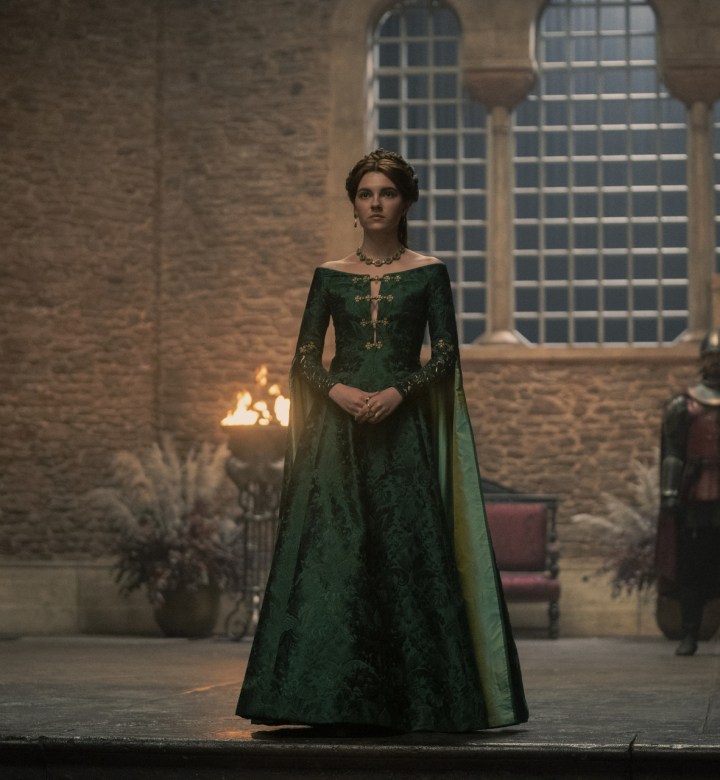 Shockingly, Daemon appears right after them, much to the distress of Viserys and those in attendance. As Viserys continues to make his speech, celebrating the new union, Alicent makes her first appearance at the feast wearing a green dress. We learn that when House Hightower calls its banners to war, the beacon in Oldtown glows green. Alicent congratulates Rhaenyra, calling her stepdaughter, and the crowd takes a seat.

As the wedding continues, Criston is approached by Joffrey Lonmouth, the lover of Laenor, who says they are both deeply invested in their union, considering they're both in love with the bride and groom.

Daemon approaches Rhaenyra and lets her know that, given that his marriage has recently "dissolved' he proposes that they get married instead of her and Laenor. Suddenly, a scream is heard from the other end of the ceremony, and we see Criston has begun pummeling Joffrey and beating him senselessly.

Before he is stopped, he kills Joffrey leaving the crowd shocked. Lyonel Strong gets his son, Harlan, to break up the fight before it gets too out of hand, but it's too late. Harlan manages to get Rhaenyra out of there before she is hurt and Laenor sees that Joffrey has been killed and screams in aguish.

Seeing that this affair has proven to be quite disastrous, they decide to move the wedding date up and have the ceremony conducted immediately. The episode ends with Rhaenyra and Laenor exchanging vows as he tearfully accepts that his love is now dead.

In deep despair over losing Rhaenyra and his actions at the wedding, Criston has retreated to the Weirwood tree. He has removed his armor and plans to take his own life by stabbing himself, but before he gets a chance to, Alicent finds him and stops him. 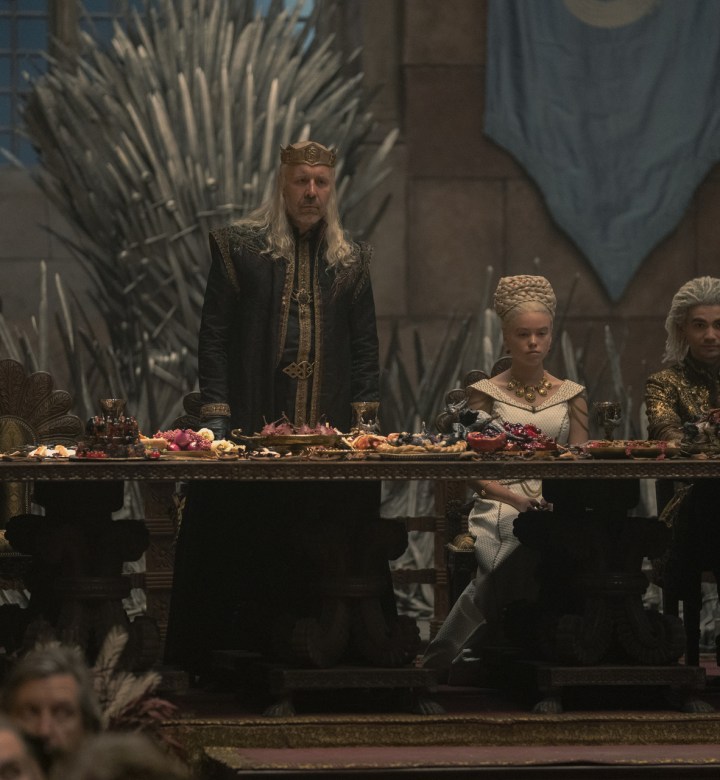 The lead-up to the Targaryen Civil War has been a tumultuous one. While it has not been revealed (to those that haven't read the book) who will fight on what side, it's clear that Rhaenyra and Alicent will end up against one another.

Next week will finally see the time jump that has been awaited for some time, with Emma D'Arcy and Olivia Cooke stepping into their roles as Rhaenyra and Alicent. They have shoes to fill as Milly Alcock and Emily Carey have crushed it thus far, and it will be hard to see them go.

Ten years will have passed since the vents of this episode, and the tension looks to be at an all-time high. With a decade between this week's episode and next, the reign of Viserys will likely end not with peace but in a bloody war that he tried his best to prevent.

Despite his efforts, this conflict felt inevitable and something he could not avoid.