How One Victoria’s Secret Model Got Her Bike Back 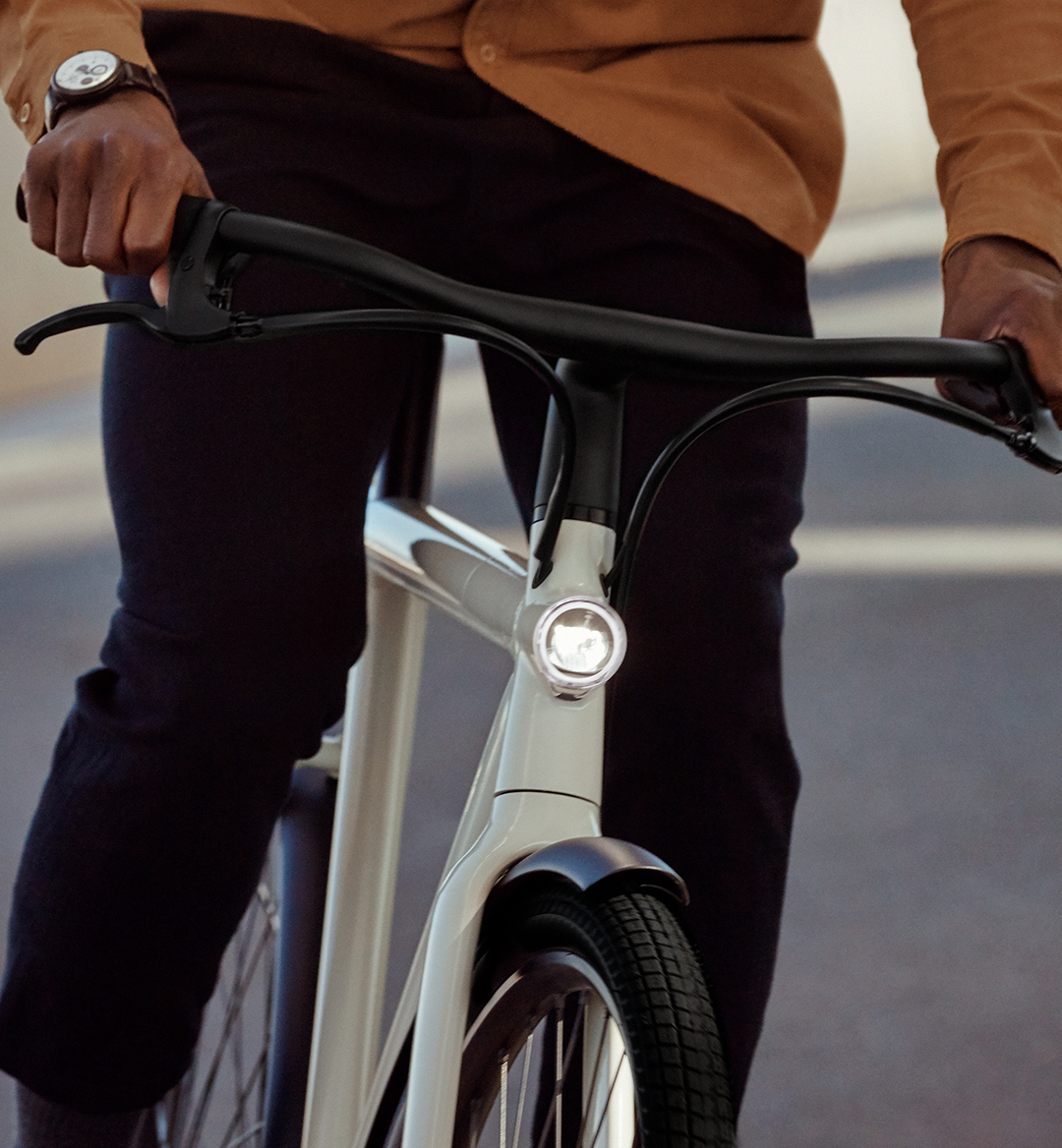 A Bike Hunter, the VanMoof Smart S, and the confrontation / VanMoof

Last month, Linda Vojtova—a print and runway model who has appeared in Vogue, Harper’s Bazaar and Glamour and on the catwalk of underwear giant Victoria’s Secret—locked her bike in front of her around-the-clock doorman building in New York's TriBeCa. She went home, and when she returned, her bike was gone. She had only owned it for six months but was non-plussed. She knew a Bike Hunter was on the case.

Vojtova purchased it from VanMoof, a Dutch company that offers two tiers of bike ownership: a full-fledged investment or a subscription model, essentially an Uber for bicycles. In the latter, instead of being chauffeured around, the bike is yours to keep for as little as $19 per month. If it's stolen, the company deploys a Bike Hunter—yes, that's what these specialists are called—to retrieve it. All the bikes are GPS-tracked and decked out with thief-deterrent alarms, but around ten bikes are stolen every month, according to Daan Rekkers, VanMoof's Head of Brand.

To put that into context, one VanMoof bike is sold every 30 minutes around the globe. According to a June 2018 study, riders aged 30 to 45 years are the majority cyclists in the United States, and the overall rider count has dramatically risen to 47.5 million nationally. The country's mid-age culture is embracing the bike. If your cargo is stolen, most retailers leave you to your own devices post-purchase, urging you to buy another model, but VanMoof is different. They’ve made an unstealable, and retrievable, bike.

VanMoof bikes are meant to act like a car, something you can leave out on the curb to weather the weather. The alarm system works by triggering a “friendly notification,” should anyone try to tamper with your two-wheeler. The noise and light effect is polite. The second brings more aggressive noises and lights; the third initiates a total lockdown.

With a subscription to VanMoof’s Peace of Mind policy, Bike Hunters, of which there are 17 worldwide, are on the watch instantly. Really, they're just employees who have been trained on VanMoof's GPS-tracking software. The program encompasses special features, like offering a replacement while your bike is being tracked down and an "ironclad guarantee" that your baby will come back to you.

There are other bikes on the market providing smart services, like the lighted handlebars of Vanhawks that illuminate the direction you should go, Votala's anti-theft system will send you a text if it thinks your bike is being jacked, and Yerka's ingenious innovation to fight theft. With their integrated lock system, the seat secures a bike's entire frame to something, rendering a criminal incapable of removing the bike without breaking it.

The moment a bike is reported stolen on the VanMoof app, a Bike Hunter is immediately assigned to the case. "It is possible to get anywhere in the world in 24 hours," Rekkers says, so the global team of bike hunters, like Liam Neeson in Taken, will fulfill a worldwide mission if necessary, though this particular story is contained to New York City.

Our story begins not with Vojtova, but with Zach Sarantitis, age 16; a college student with a generous father who recently moved to New York for school. He is the proud owner of a VanMoof Electrified S (a gift from his dad) and bikes every day between home and class. One day, he returned to his trusty bike rack to head out for the day. The spot was vacant. His bike had been stolen.

To hunt down young Sarantitis' bike, a Brooklyn-based bike hunter was deployed. He carried tracking gear fit for a secret service organization; a large-antennaed receiver, an iPhone with the VanMoof tracking app and an external battery pack.

After careful observation, it appeared that Sarantitis's model was consistently moving between two points on the display. The Bike Hunter followed the lead and tracked the bike's transmitter to a grocery store in Brooklyn. The only problem? There was no thief in sight. 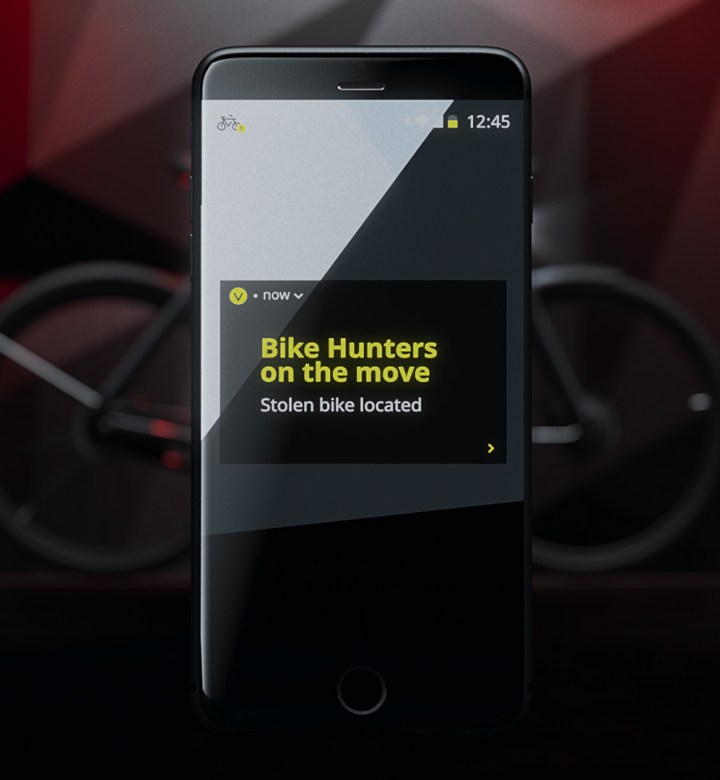 A few moments passed and a man emerged from the grocery store, sauntered to the bike and pedaled off. The Bike Hunter recalled, "His demeanor didn't indicate a thief. His attitude was too casual." Hot on the trail, the Hunter closely tailed the perpetrator on the VanMoof bike that once belonged to Sarantitis.

They arrived at a local restaurant in Manhattan, crossing bridges, highways and avenues to get there. With the suspect in mid-dismount, the Bike Hunter advanced and kindly asked the suspect if the bike was his own.

The perpetrator instantly responded, “No, it’s not my bike. I’ve never seen it before.”

Resolved to dig up more proof, the Bike Hunter silently waited for two hours. Time passed, and the bike sat, stagnant. With no movement, he decided to enter the restaurant. He passed through the doors and spotted something peculiar in his peripheral. In the corner of the restaurant, behind tables and chairs, a second Van Moof bicycle leaned. 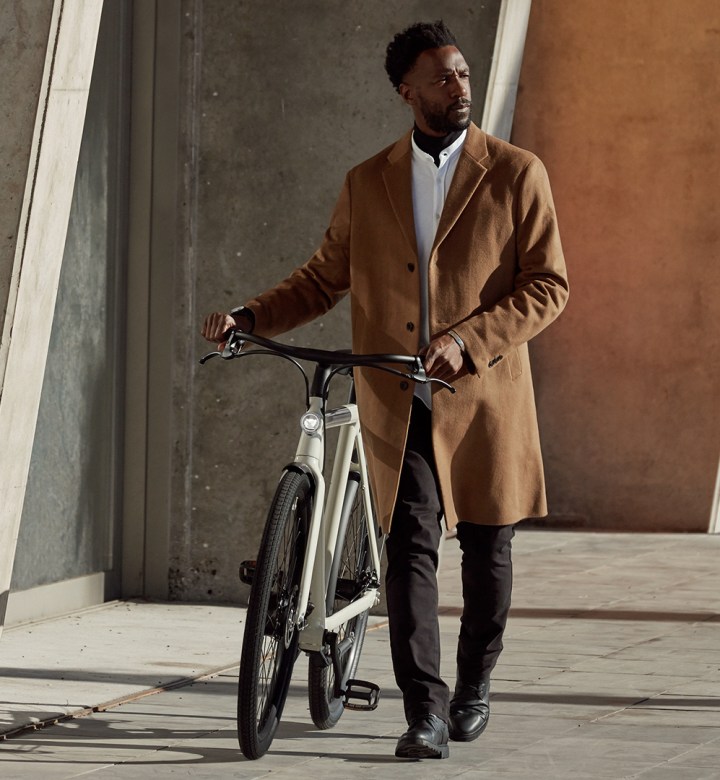 The second VanMoof bike belonged to none other than Linda Vojtova, the Victoria's Secret model whose bike was taken three days earlier. With two VanMoof bikes in one location, image proof and GPS tracking to back up the claim, the Bike Hunter called the police to the scene.

The twice-over bike thief was the manager of the local restaurant, using VanMoof's superior product to make morning deliveries of groceries for his kitchen.

When her bike was returned, Vojtova said, “I was so excited. I didn't believe I would ever see my bike again."

Rekkers claims that "75 percent of all VanMoof bikes that are stolen are recovered by Bike Hunters in two weeks." That is a huge statistic. According to New York City's Department of Transportation, "more than 800,000 New Yorkers ride a bike regularly" and the last recorded data on stolen bikes pegged 4,849 bike thefts in 2014. The NYPD historically recovers about 2 percent of those stolen models. VanMoof's track record is phenomenally better.

Sarantitis hopes to work at VanMoof in mechanics or sales or any role, really, because he’s fallen in love with their craftsmanship, teamwork and ethics through the process of his bike’s recovery.

The Peace of Mind service and Bike Hunter program is the only way that biking in an urban city becomes manageable, enjoyable and effortless. With ridership on a dramatic incline in New York City, VanMoof's smart models are paving the way.

The next time your non-smart bike get swiped, consider how at ease you would feel knowing a Bike Hunter is only a click away.