How to Overcome Gym Anxiety 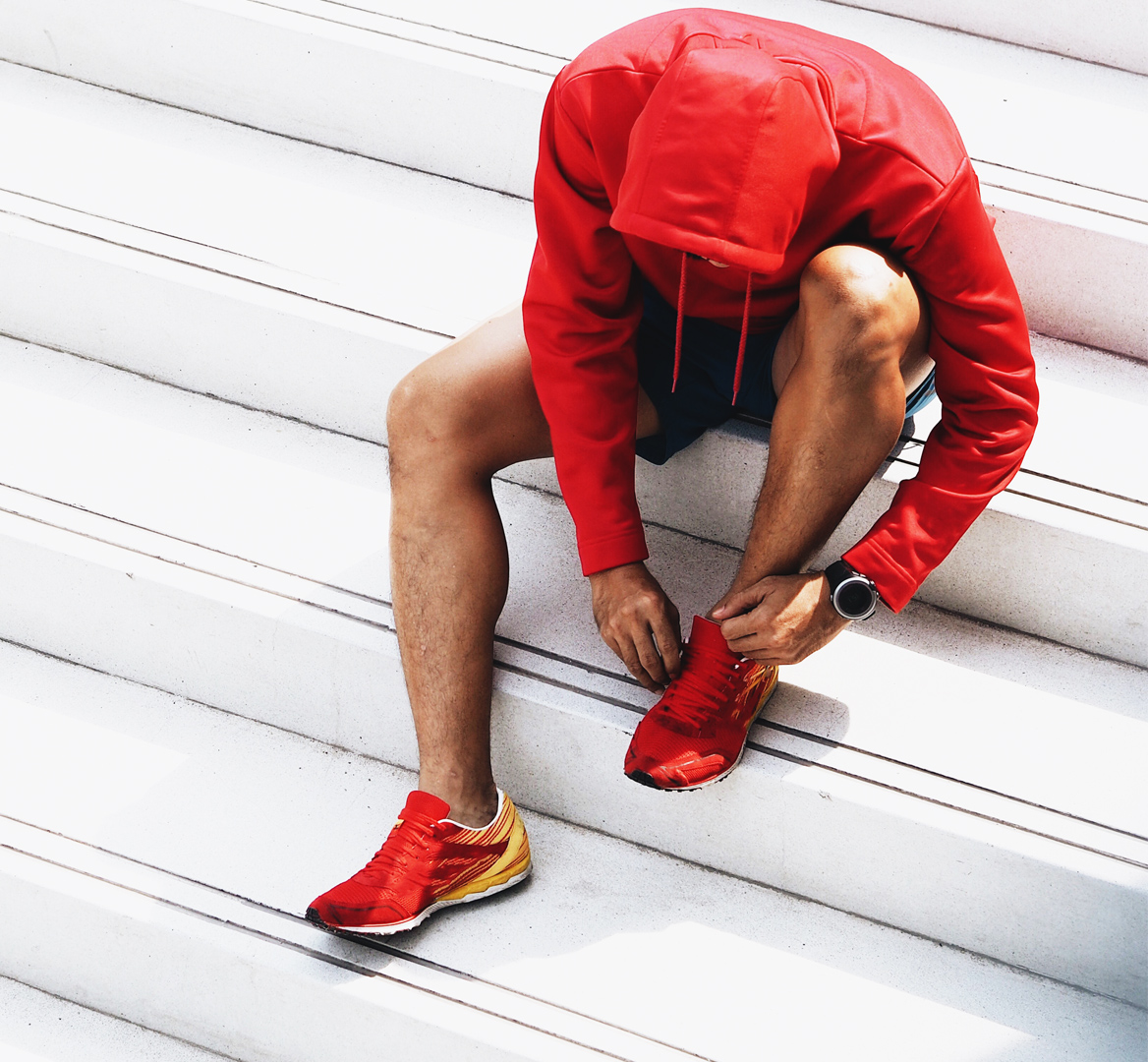 Do you even lift, bro?

Or, rather, did you resolve to start lifting on January first, but haven’t? On those rare days you do go to a gym, do you hover by the elliptical machines, steering clear of the gym's more testosterone-dominated free weight area for fear of being eaten, or worse, judged?

There are plenty of excuses not to work out. You don’t have time. You don’t have energy. You do have Netflix. But some of these excuses are actually rooted in gym anxiety, an ugly cocktail of perceived inadequacy, incompetence and judgment. The key word is “perceived,” because most of it is going on in your own head, which doesn’t make it any less difficult to deal with.

Gym anxiety is a lot like social anxiety and can manifest itself in different ways: Excessive fear of being judged, worrying that you’ll embarrass or humiliate yourself, or being so self-conscious that it’s hard to concentrate.

You’re not alone. In fact, really ripped guys with lots of Instagram followers have felt the same thing.

“When I joined the gym, I was always self-conscious that my form was bad and people were looking at me,” says Adam Pfau, a fitness influencer who has 740,000 Instagram followers and looks like he can bench press five of your closest male relatives at once. “That was always in the back of my mind. Rather than worrying about doing it correctly, I was really worried about what other people were thinking.”

There are real, tangible steps you can take to lower your gym anxiety. The first step is knowing what’s going on.

Whether you’re a novice who feels dread at the mere thought of entering a fitness club, or a vet who still feels the occasional twinge of fight-or-flight, you’re normal and OK. Gyms are places with lots of noise and stimuli, lots of clanking, lots of grunting. It kind of feels like a fight could break out at any minute, but also like everyone is about to take a selfie? There are mirrors everywhere! Gyms can be weird.

But if these stimuli create a fear that’s excessive (or makes you want to not come back), you’re probably experiencing a form of social anxiety, says Noah Clyman, a cognitive behavioral therapist in Manhattan and the founder of NYC Cognitive Therapy.

“Social anxiety is a condition where people are excessively afraid of negative evaluation by other people,” says Clyman. “It's also linked to negative beliefs that the individual has about himself or herself. These beliefs can be things like, ‘I'm awkward, I'm defective, I'm weird’ and so on.”

People with social anxiety tend to have anxiety about anxiety, says Clyman. In other words, they tend to try and suppress it or avoid at all costs. If the gym is giving them anxiety, they’ll avoid the gym. But there are better ways to deal with the issue than avoidance.

Know That You’re Going to Be Self-conscious, and Then Count the People in the Room

Clyman says that when someone enters the gym as a beginner, or they’re simply prone to anxiety, they’re going to be self-conscious. That’s the just the nature of the game, so don’t spend time beating yourself up about it.

“That’s going to happen,” says Clyman. “They're going to focus attention on themselves, automatically. It's not their fault.”

Instead, people experiencing gym anxiety should work on shifting their attention from the internal to the external. Focusing on what’s going on in the room is a good way to do this. What color are the walls? How many people are in the room? Try to count them. Seriously: Count every person in the room. By putting yourself through these mental paces, you’re putting your focus back on the outside world.

Before you even step into the gym, do some research. Find a fitness plan that’s right for you, and then stick to it. This sense of structure can cut anxious feelings way down.

“Now you’re walking in with a ton more confidence because you know you have a plan,” says Pfau.

He recommends a full body beginner’s routine. You can find one with a quick Google search, but spend some time looking at the reviews. It will probably put you in the gym three days a week, on non-consecutive days (Monday, Wednesday, and Friday, for example). This is enough of a structure to keep you motivated, but not so daunting that you’ll feel overwhelmed. Also, by focusing on the whole body, Pfau says you’ll see the most substantial progress in the shortest amount of time.

“You’re building your overall strength,” says Pfau. “You’re only in the gym three days a week, so as a beginner you don’t need to be in the gym that often.”

Get the Movements Down by Using YouTube, And Start Light

Pfau recommends compound movements, like deadlifts or squats, to build size and strength. For the novice, however, these movements can be intimidating.

“I remember first trying to deadlift,” says Pfau. “I was definitely paranoid that people were looking at me.”

He recommends watching YouTube videos of the movements and practicing them. Then, when it’s time to work out, don’t use too much weight. Allow yourself to become comfortable with the movement first.

In fact, it’s OK to work with no weight on the bar at all.

You might feel weird bench pressing a bar with no weight on it. Like you’re about to be judged by the guy next to you who’s absolutely yoked. But Pfau, a guy who is absolutely yoked, says that’s not the case.

“If someone else is looking at you, it’s because they’re in the exact same position as you and they're just as self-conscious,” says Pfau. “They’re looking around because they don't know what they're doing.”

Meanwhile, the people who are more advanced are so deep in their own habits, that they barely notice anyone else in the gym. These people are too focused on their next set, or on the podcast that they’re listening to, to care about how much weight you’re putting up. They’re in their own rhythm, one that’s built up over years (and sometimes decades).

“It's really important to say that the people who are judging you are the in the same exact position as you,” says Pfau.

Set Achievable Goals and Be Relentless in Giving Yourself Credit

If it’s your first day in the gym, it’s not realistic to think you’re going to bench press 500 pounds. Instead, create a concrete goal based on your fitness level. That goal can be something like, “I’m going to walk into the gym and do more pull-ups than I did yesterday.”

And then give yourself credit. Acknowledge that you achieved your goal and that you did better than the day before. “Just thinking these things isn't going to be enough, at least for most people,” Clyman says. ”Writing it down will make it much more impactful.”

Your achievements will sink in more when you write them down, thus creating positive forward momentum. You can keep your ongoing list of accomplishments on your phone’s Notes app. Over time, that list gets pretty long. The longer that list gets, the more your confidence takes off.

Go With a Friend

This may not be an option for you (not because you don't have friends, but because their schedules might not line up with yours). But if it is an option, do it.

When Pfau first started working out, he always went with a buddy. This alleviated some of the self-consciousness he felt about his form. Having a friend can provide much-needed support, and you two can keep one another on point.

Whenever possible, Pfau recommends working out when the gym is less crowded. If you can go during your lunch break—or if you’ve got flexible work hours—do it.

Typically, that means avoiding the 6 p.m. after work crowd, but you can check the “popular times” feature on your gym’s Google Maps listing.

Remember Why You’re Going in the First Place

Be extremely clear with yourself about why you’re going to the gym. Is it to be healthier? Is it to look better in your clothes? Clyman says that the clearer you are in your rationale for working out, the more likely you’ll keep going to the gym.

He recommends keeping a list of reasons that you’re going and referring back to it any time you start to feel shaky. “If you're starting to waffle, that'd be a good time to pull out that list,” says Clyman. “Just remind yourself of why you identified that as your goal and why that's important.”

The ironic thing about gym anxiety is that exercise is instrumental in reducing anxiety and stress. If you can manage your anxious symptoms—either by employing the tips above or seeing a therapist—just know that there is a whole world of wonderful, joy-inducing chemicals waiting for you on the other side of your gym session.

When you complete a workout, your body releases endorphins. Endorphins improve mood and pain resistance, “two critical features of a successful stress autoregulation” according to the Archives of Medical Science. You begin to rewire your brain’s reward system, and your body starts to look forward to the dopamine and endorphin hits it gets from your workouts. You basically get a neurochemical prize from going to the gym, and start to associate it with good feelings—not anxiety and dread.

Once that forward momentum starts going, it can be hard to stop.

Just remember to set achievable goals and give yourself credit. And maybe one day, you’ll be able to bench press all your male relatives (or, at the very least, feel pretty damn good about yourself).