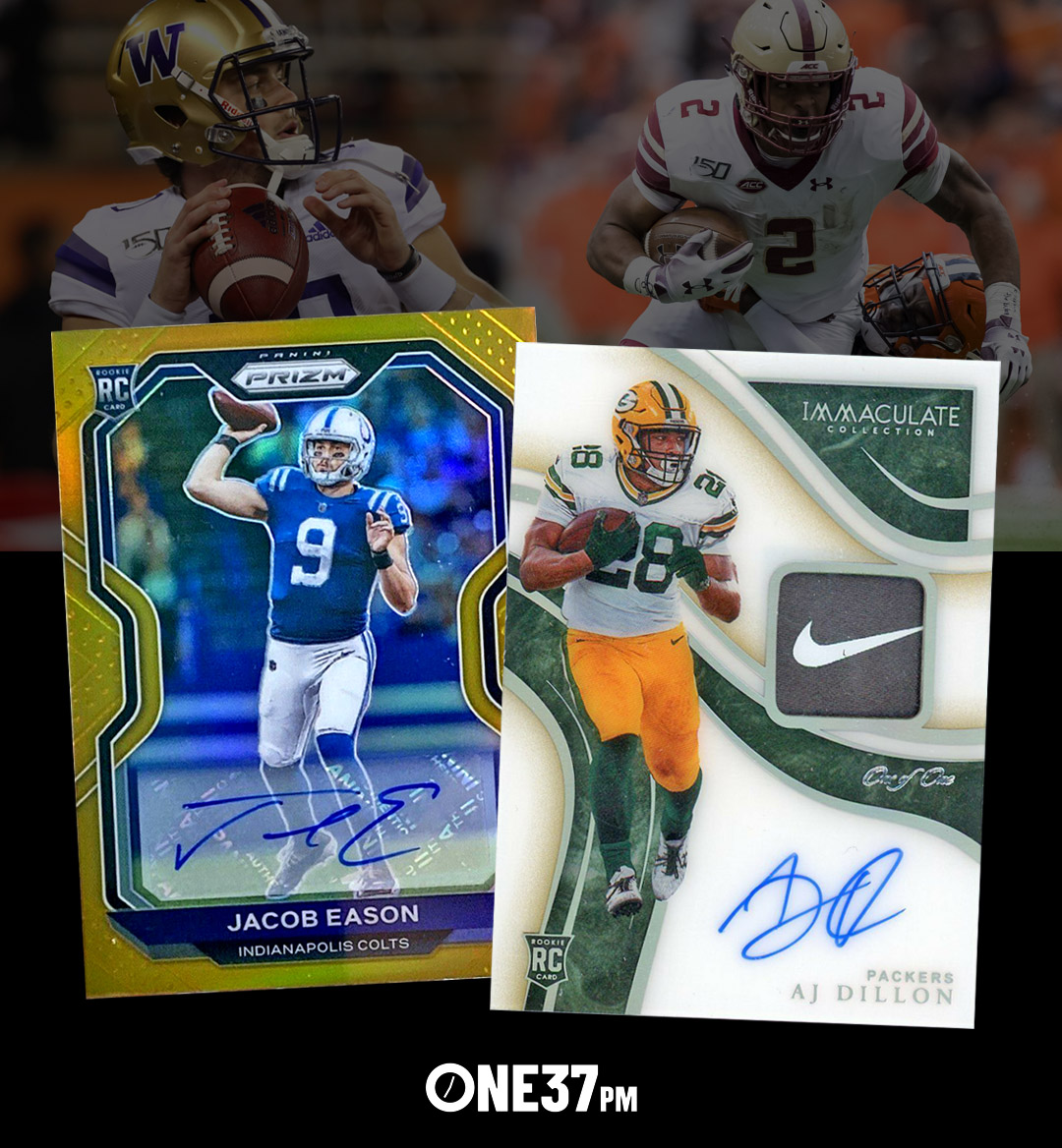 One of the most fun aspects of collecting sports cards is prospecting and taking a gamble on young players that you feel are undervalued. This can lead to huge returns if you hit on the right player. This year’s Super Bowl is a prime example of what can happen if you get in early on the right guy.

Imagine if you were a New England Patriots fan who believed in Tom Brady, the unheralded 6th round pick out of Michigan, right after he was drafted and loaded up on his rookie cards. One quick glance at the current $19,050 value of his 2000 Bowman Chrome PSA 10 rookie card, when you could have likely been buying them for $1 his rookie season, is all the evidence you need.

To hammer the point home, on a season 1 episode of Card Talk Pod (51:00 in), Kansas City Chiefs Quarterbacks Coach Mike Kafka talked about being at a card show in the Kansas City area before the 2018 season where he saw Patrick Mahomes PSA 10 Prizm rookie cards selling for between $40-60. Those same cards are selling for around $15,000 today.

ONE37pm recently had a chance to sit down with two rookies whose cards have been heating up recently, Indianapolis Colts quarterback Jacob Eason and Green Bay Packers running back AJ Dillon, to speak with them about the hobby. 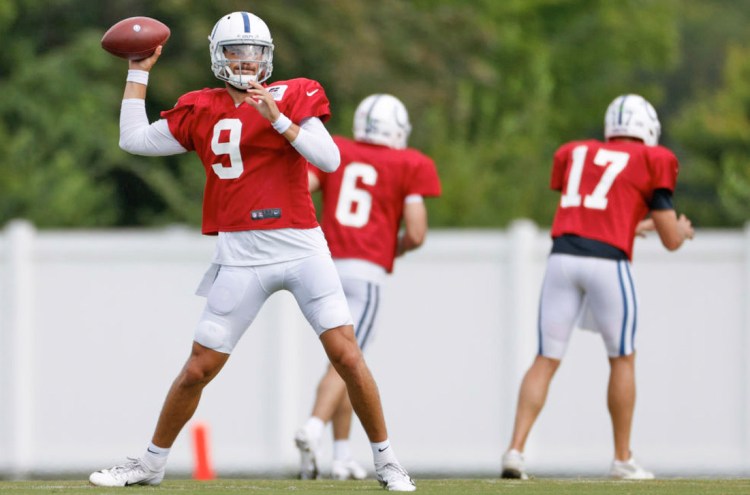 Jacob Eason, the 2020 4th round draft pick out of the University of Washington, has been generating some buzz in the hobby after spending his entire rookie season on the sidelines behind future Hall of Famer Philip Rivers. For example, one of his ungraded Panini Prizm gold rookie auto-numbered/10 recently sold on eBay for $1600.

How does it feel knowing that people are starting to invest in him, thinking he might be the next Patrick Mahomes or Tom Brady?

“It’s cool!” Eason said. “Being out there like that is pretty special and humbling that so many people and fans believe in me. It makes me feel very special. Panini is doing a great job of putting out some great content for these people to enjoy and own. I’m just very blessed and humbled to be in this position and be a part of this all.”

Growing up in Lake Stevens, Washington, Eason even dabbled in the hobby a bit.

“I wasn’t a huge collector as a kid, but I had a couple of binders full,” Eason remembered. “Mainly quarterbacks and guys I looked up to like Peyton Manning, Philip Rivers, Tom Brady, guys like that. Being in a situation now where I’m actually on the card is pretty unique and special. I don’t own any of my own cards yet. Maybe if I go to Target or Walmart and pick some up, I’ll get lucky. But I don’t own any of my own at the moment.”

With all of the different products that Panini puts out, the number of autographs that every rookie signs seem staggering. However, Eason actually enjoyed the process.

“It’s definitely a lot! You finish one box, and you have another box coming in,” Eason said. “But it’s all worth it because I was one of those kids who were all excited to get those cards when I was little, and now, I know I’m signing all those cards, and it’s a lot of work upfront but just thinking about that one kid who is opening up that pack of cards and gets my card, and he’s a fan, now he wants to be the next person on that card. It’s pretty cool to be in that situation and give back to these card collectors. It’s pretty special for me. 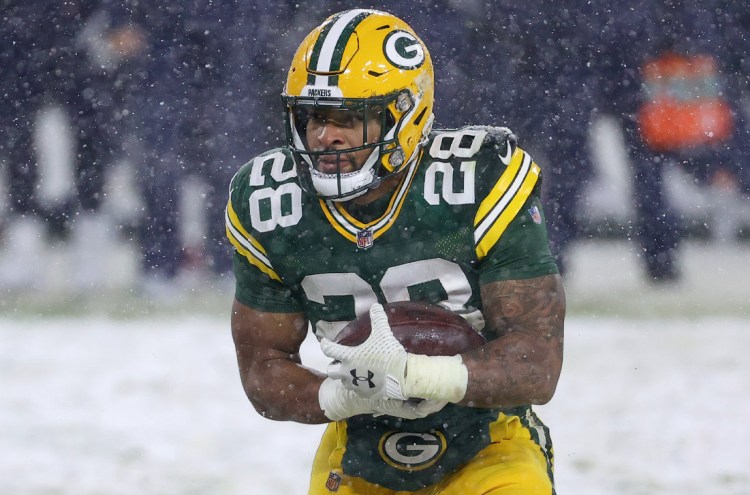 AJ Dillon, the Green Bay Packers' 2020 second-round draft pick out of Boston College, certainly turned some heads in his rookie campaign. Sitting in a loaded backfield behind Aaron Jones and Jamaal Williams resulted in limited opportunities his rookie year. Still, he made the most of them, with a stellar 5.3 yards per carry and 2 touchdowns on only 46 attempts.

That success, combined with the fact that Aaron Jones is currently a free agent, has led many collectors to believe that the starting running back job in Green Bay’s high-powered offense is in play for Dillon in year two. Parlay those two factors with the relatively low cost of entry on his cards,  and he could very well be a sneaky low-key play during the offseason.

To give you the range, on the high end, his Immaculate 2020 Rookie Patch Auto Platinum 1/1 recently sold on eBay for $808, but you can still purchase one of his Prizm Silver Autos for $91 or an unsigned Prizm Silver for just $26.

"To see people investing money in me, and what they see in me in the future, is an amazing thing,” said Dillon. “I love having that support. The Packers fans have been nothing but welcoming and encouraging, so I am looking forward to next season, and I kind of feel the same way as the people who are investing in my cards. I think it’s definitely worth it. I think next season, I am gonna do everything in my power to do the best I can."

Unlike Jacob Eason, Dillon actually has started collecting some of his cards. He is still learning about the different sets and inserts, but he does have a favorite one.

“I don’t know all the actual names and details, but I do have this one metal card that I thought was the coolest thing ever when I got it,” said Dillon. “Some of the cards that are see-through, I think those are sick. Mostly I collect the ones that have a good story or something like that on the back; I collect those for my own personal enjoyment.”

It will be fun to see how things play out for Dillon and Eason in year two both on the field and in the card market. If you have any big cards of theirs or decide to purchase one, please post a photo on social media and tag @cardtalkpod so we can check them out!