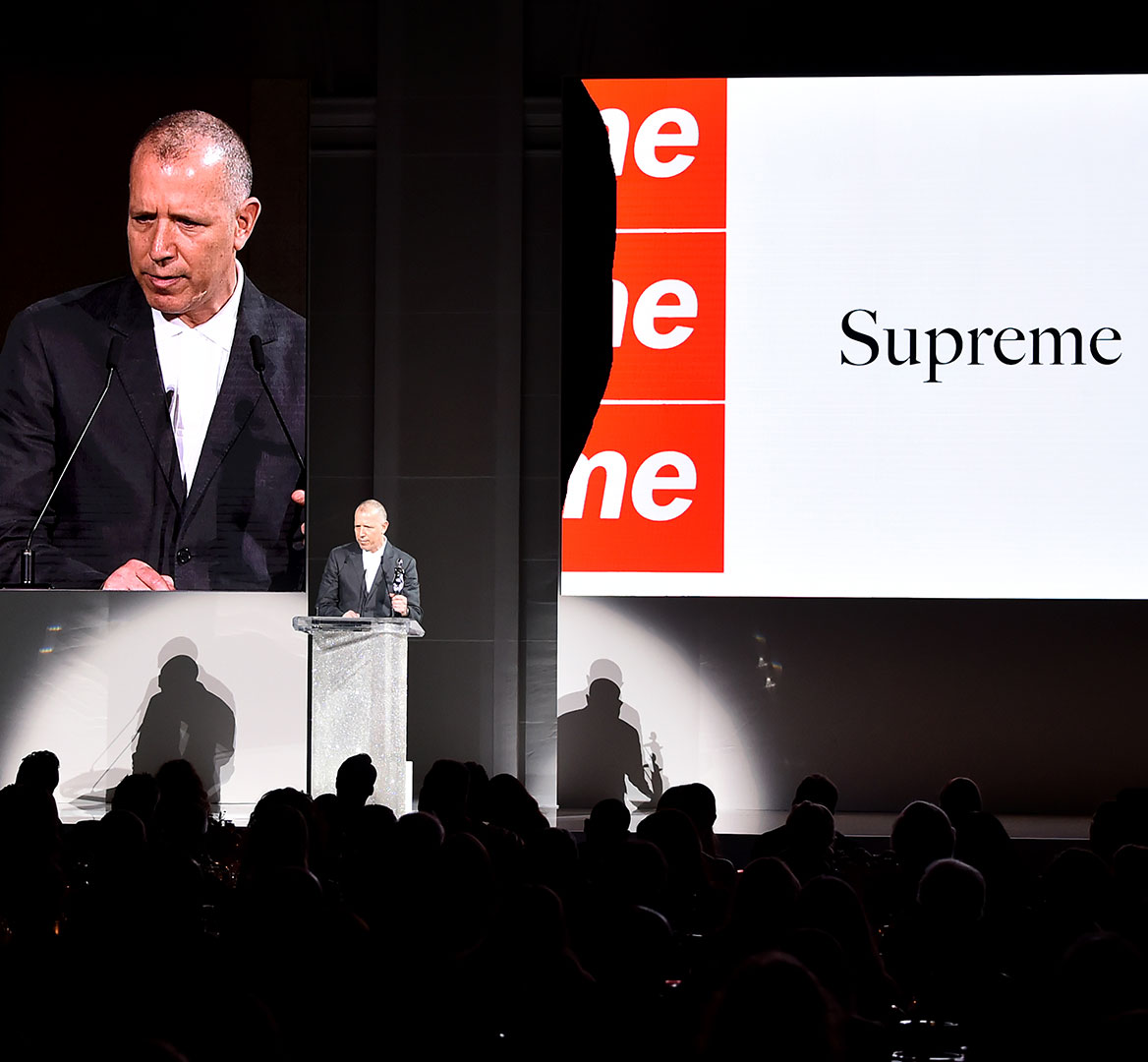 Product drops, resell markets, coveted collabs and #rare must-haves. Much of what we associate with Hypebeast culture today harks back to a little New York skate shop that wasn’t supposed to peddle fashion in the first place. Now, it’s a global brand with a cult-like following and a logo that may as well represent the pinnacle of streetwear. We’re talking, of course, about Supreme.

Opened in 1994 by English transplant James Jebbia, Supreme started as less of a label and more of a space. Snarling skaters staffed it, the speakers blasted the hottest hip-hop onto the sidewalk, the atmosphere was full of attitude. The store soon became a clubhouse for the downtown New York skate scene, a group that incidentally included artists, filmmakers and cultural shakers who came to define what was “cool.” Cool was Supreme, and Supreme was cool. Twenty-five years later, it’s still cool, but in a special way that has managed to keep the respect of skate kids while earning recognition among the high-fashion elites.

Last year, Jebbia was named Menswear Designer of the Year at the CFDA Fashion Awards. His acceptance speech, made in the presence of industry old guards like Ralph Lauren and Anna Wintour, expressed his company ethos: “I’ve never considered Supreme to be a fashion company, or myself a designer, but I appreciate the recognition for what we do.”

So how has Supreme done what it’s done, going from a counterculture hangout to one of the most influential style powerhouses in the world? We’ve scoured a few rare interviews Jebbia gave to round up his most ingenious business-building lessons.

Before branching out on his own, Jebbia worked with and under people who inspired him. One of those people was Shawn Stüssy, who, after a chance meeting, hired Jebbia to run his Soho store. "I wouldn't be doing what I'm doing without what Shawn has done," he told British GQ, "Shawn was a huge personal influence too because at the time, he was doing such great stuff. He is a unique character and was definitely [a] mentor for me."

2. Find Your Niche and Fill a Void

Supreme is a skate brand. For years it catered to a niche group, which earned it the customer loyalty that helped propel its mainstream success. But when Supreme first ventured into clothing, Jebbia had sensed a void that needed filling. He recently told GQ, “In some ways, when we opened, if there had been great stuff for us to buy, we wouldn’t have needed to make anything. And wouldn’t have made anything. So that wasn’t a thing, ever, that I thought we were going to make any clothes… I was just thinking about the people that came into the shop—the people of New York—what they wanted, and there was something missing.”

3. Know Your Customers and Be Inspired by Them

From the beginning, Supreme has had a clear understanding of its customer base. The brand is inspired by the people who buy it, and vice versa. “I guess the influence was the people who were around the shop—the skaters who were shopping. They would wear cool shit; they wouldn’t wear skate clothes. It would be Polo, it would be a Gucci belt, it would be Champion. But it’d also be another element—not skate but a sensibility of being in New York,” Jebbia has said of the early days.

When hiring, Jebbia typically pulls from Supreme’s extended family, from skaters and artists to loyal customers. “The people I work with is what gives the store its personality,” he said. “They treat it like it’s their own.”

5. Stay True to Your Brand

Supreme famously resists trends and doing things that would typically be expected from a skate brand. “We’re not trying to reinvent the wheel with what we’re doing,” Jebbia says. “If you look at what we do, a lot of the shapes are very simple. We’re always doing things our own way. I think most of the time, people can tell that’s a Supreme piece.”

6. But Don’t Be Afraid to Evolve

Of course, when your business depends on youth culture, you have to keep up. “The way people dress, what they listen to in music, it evolves,” Jebbia says. “For us, we try and evolve... We’re trying to make things for today’s youth. We’re not stuck in a box; we’ve just evolved in our own way.”

7. Collaborate, but Be Smart About It

Some of Supreme’s most coveted pieces have been created through collaborations with brands from Levi’s to Louis Vuitton. While these partnerships have played an integral role in Supreme’s growth, Jebbia doesn’t approach them lightly. "We are very careful with our collaborations. There's got to be a reason behind it; we don't abuse it, and we don't want to lose people’s trust." The bottom line? Keep things authentic, even if you’re branching out.

You don’t need an MBA to know that when the supply is lower, demand is higher. It’s the idea behind one of Supreme’s most lucrative (and influential) business practices: the limited-run drop. And though that model began out of necessity—“We’d order small quantities, out of not having certainty or funds to deal with it if we were left with a ton of stuff that people don’t like”—it works. Whatever you’re doing, focus on quality, not quantity.

9. Let the Product Speak for Itself

There weren’t a lot of interviews with Jebbia to pull from for this article, as he is notoriously press-shy. As it turns out, the reasoning behind that is a business lesson in itself. “I’m not the type of person who’s going to gloss over things to make them look all perfect and pretty so it is what it is — here’s the product,” he told Hypebeast in 2013. “We try to put out good stuff, and we let the product do the talking.” After 25 years, we’re still hanging on every word.

Related: The Coolest Streetwear Store on Each Continent