The 26 Most Expensive Yugioh Cards of All Time 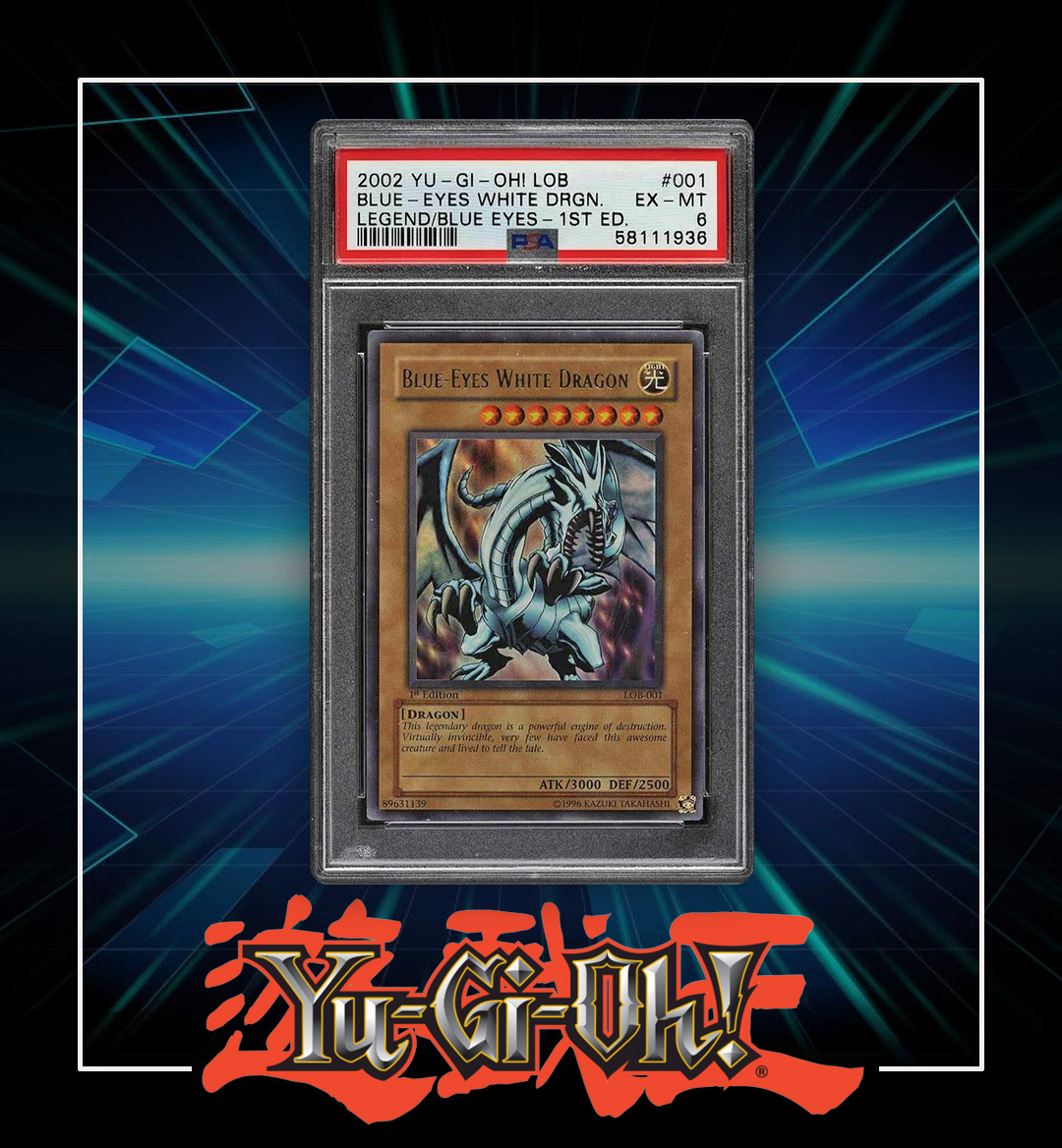 Before we discuss Yugioh cards, let's talk about the franchise!

Few media franchises have achieved the level of success that Yu-Gi-Oh! has. After launching, it offered a compelling trading card game and an anime series cards’ monsters come to life. This one-two-punch immediately hooked young fans and began an entire mythos of Yu-Gi-Oh! series, films, video games, and merchandise, to name a few pillars of the empire. And like Pokemon and similar franchises, there are a few select trading cards that have gained prominence for their value and rarity. While some of the higher-valued ones were only distributed as and award status in tournaments, that’s not always the case.

Here are a few standouts Yugioh cards and just how much they have sold for. 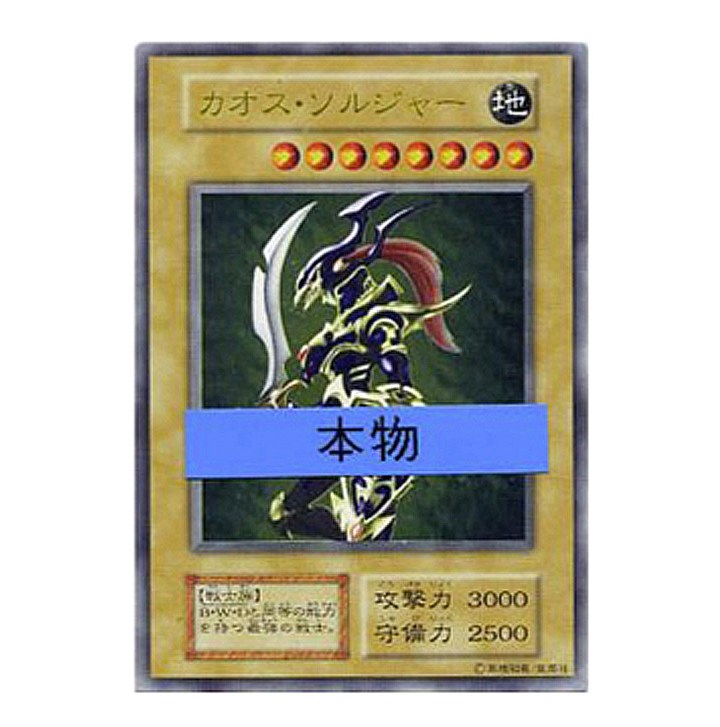 Easily the most valuable card on this list, the Black Luster Soldier was an exclusive prize card awarded at the first-ever Yu-Gi-Oh! tournament in 1999. It is printed on stainless steel and is the only one of its kind, thus its coveted rarity makes it essentially priceless. Those who have listed it for sale (with only rumors confirming amounts trading hands) asked for amounts in the millions. Suffice it to say, anyone who lucks into this card has essentially hit the Yu-Gi-Oh! lottery. 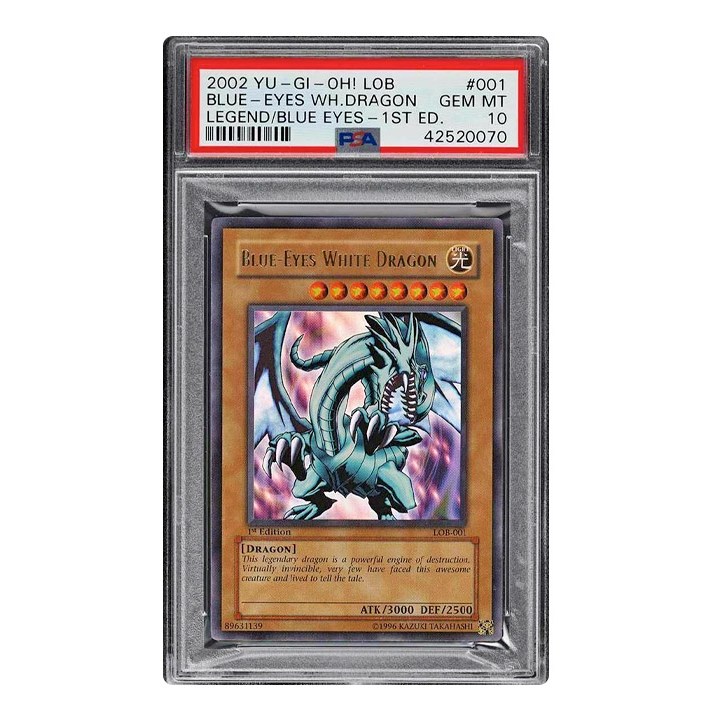 This is arguably the most iconic card associated with the entire Yugioh franchise! Blue-Eyes White Dragon is popular not only for its strength in the trading card game — fusing three of them together will produce Blue-Eyes Ultimate Dragon — but also its powerful appearances in the original anime and manga. The first of these cards were released in Japan in 1999 and the United States soon after, and mint condition first editions are skyrocketing in value. (One father even went viral for selling a few of his to pay for his daughter’s education!) 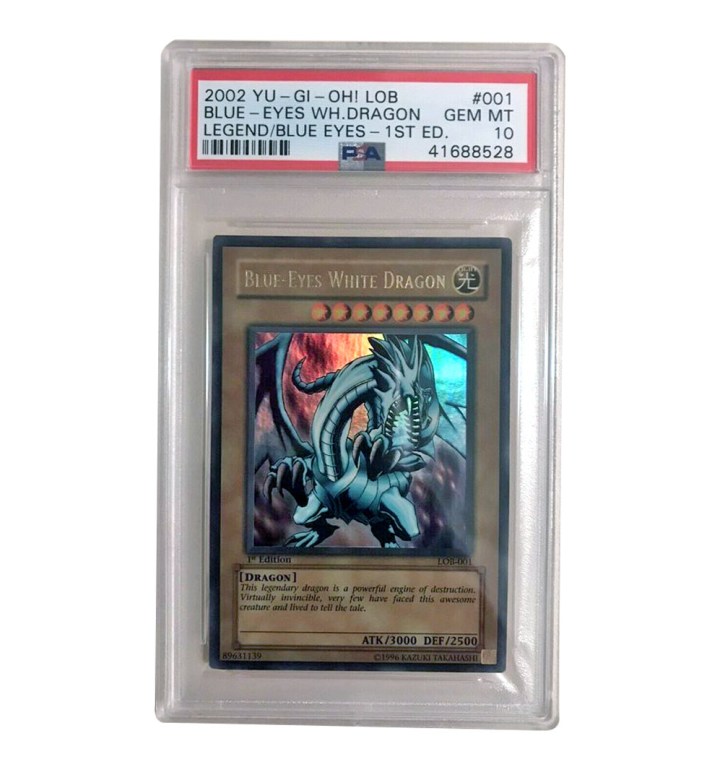 This is the same card as #2, but I included it on the list to show just how volatile the prices can be of sports/trading cards. It sold less than a month after the previously listed on, but for almost $40,000 less. 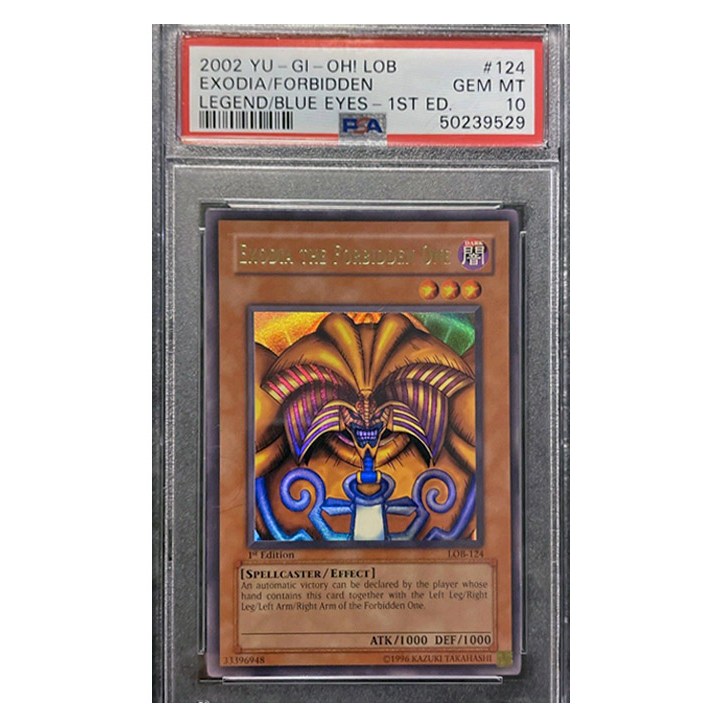 The total PSA 10 population of this card is 82, with 365 of them graded. That's about a 25% gem rate, making this card fairly difficult to grade and highly sought after whenever a PSA 10 pops up on the market.

Legend of Blue Eyes White Dragon was the first expansion of the Yugioh TCG, and this card was one of ten Ultra Rares. This is one of the most popular Yugioh cards in the entire game. 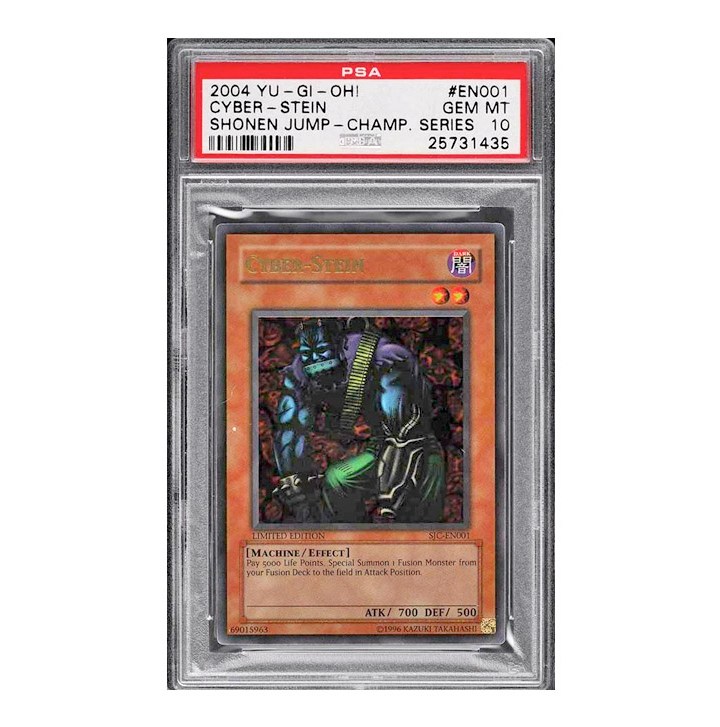 Unlike the many commonplace versions of this card inspired by the monster in Frankenstein, the one worth some significant cash is — you guessed it — another tournament award edition. Awarded at the Shonen Jump Championship, and a few thereafter, there are a little over a hundred of these cards in existence. There are only 21 PSA 10's of this card out there, so they don't come up for sale often! 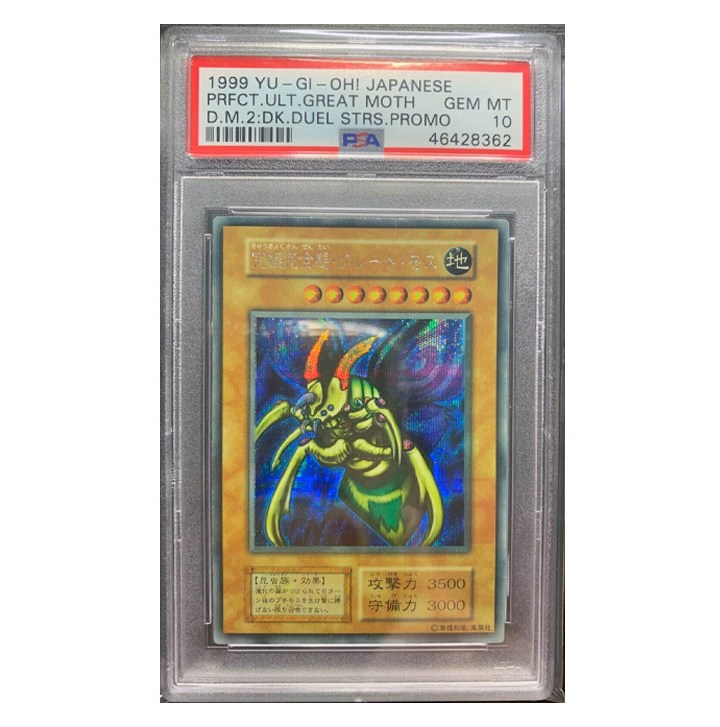 This card had a PSA population of just 1 at the time it was sold but there have been two more PSA 10s added to the population report since the sale.

It will be interesting to see how that affects the price the next time one of these Yugioh cards comes up for sale. 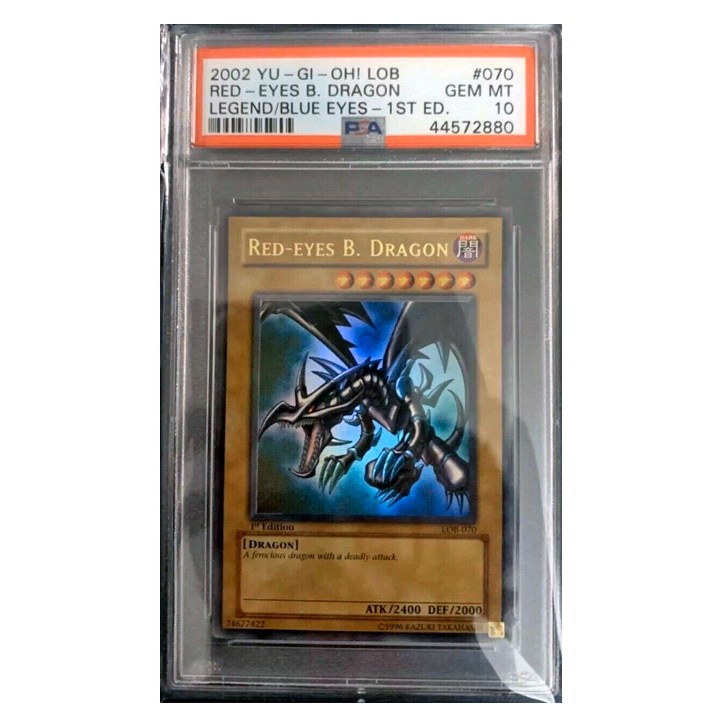 Continuing on the trend of ridiculously low PSA populations, there are only 69 of these graded as a PSA 10. This card comes from the first set of the Yu-Gi-Oh trading card game released in English. 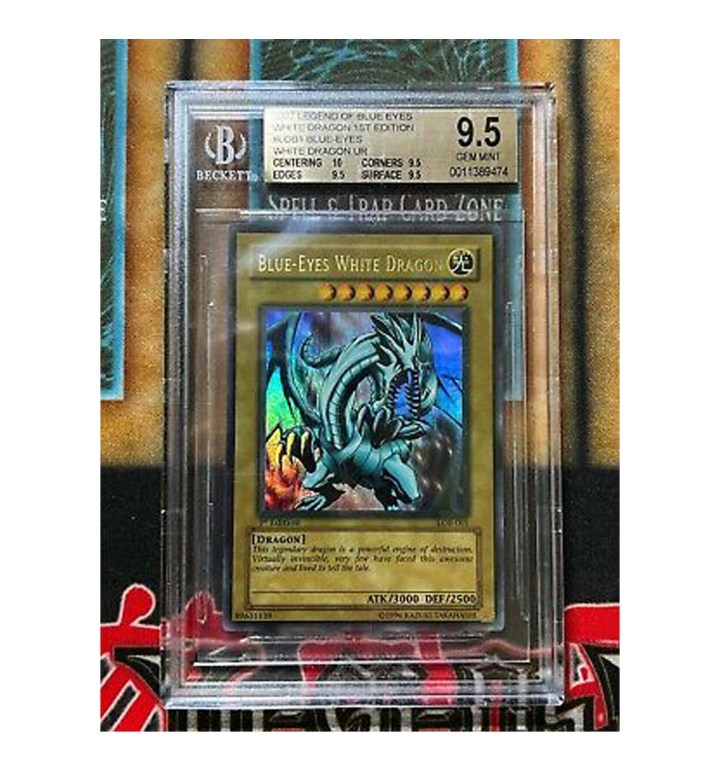 This card stands out because it is the "wavy" edition. The term wavy was originally known as 1st edition but was coined when collectors realized that the 1st edition cards from the original LOB expansion were printed on two different card stocks. The wavy version was more dull and had a wavy texture to it. 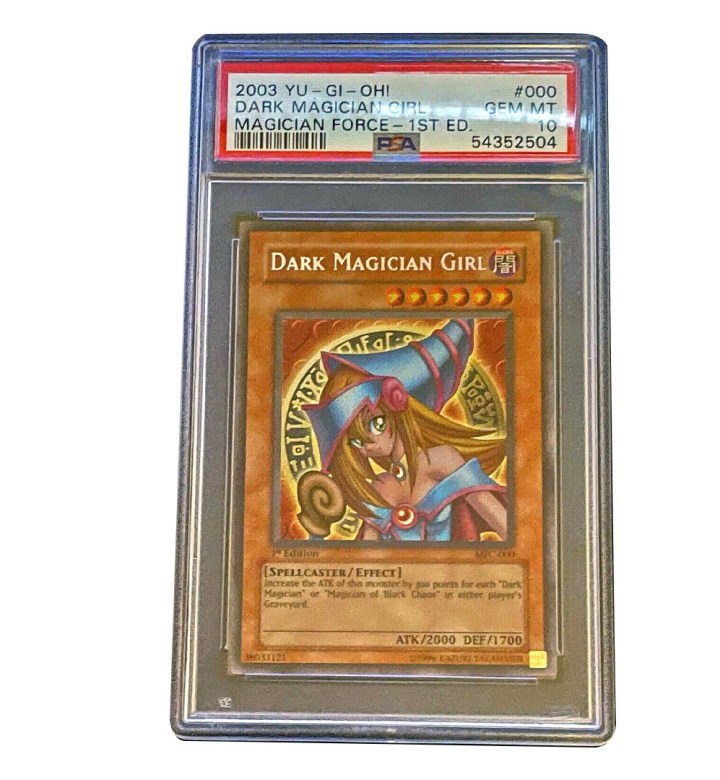 Magician's Force was the 8th expansion of the Yugioh TCG. It was released in October of 2003 and consisted of 108 cards total. 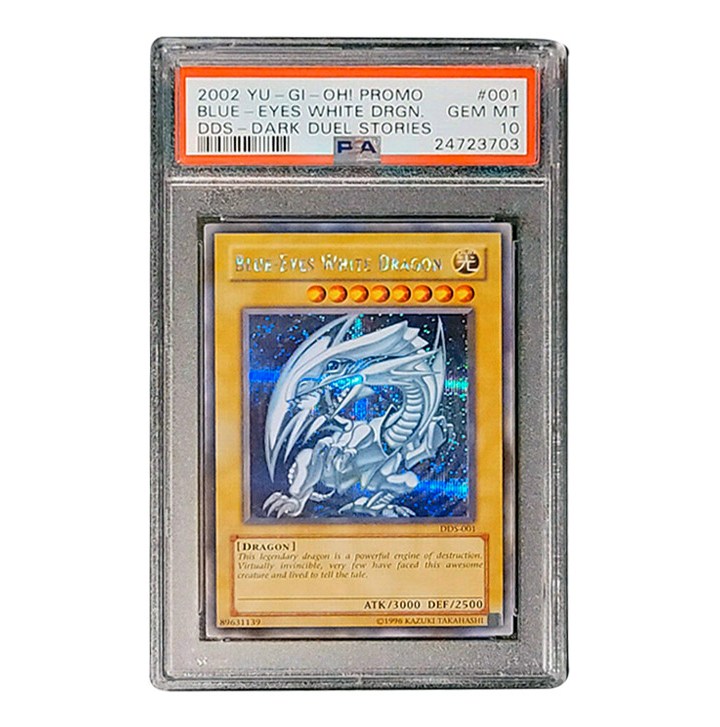 The total PSA 10 population on this card is only 131, making this rare gem very difficult to find. 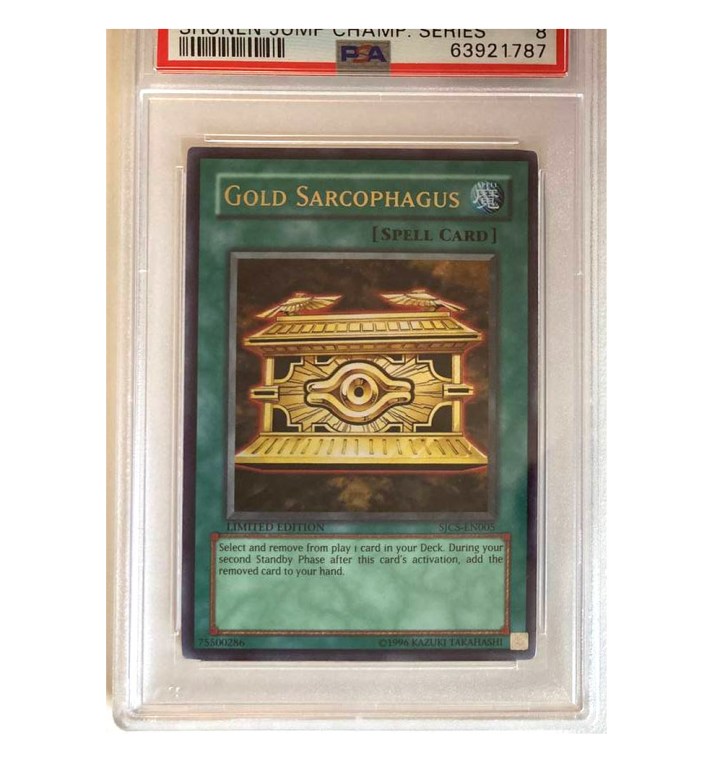 Only 4 copies were distributed at each Shonen Jump event when this card ws given out, and the Gold Sarcophagus was one of them. 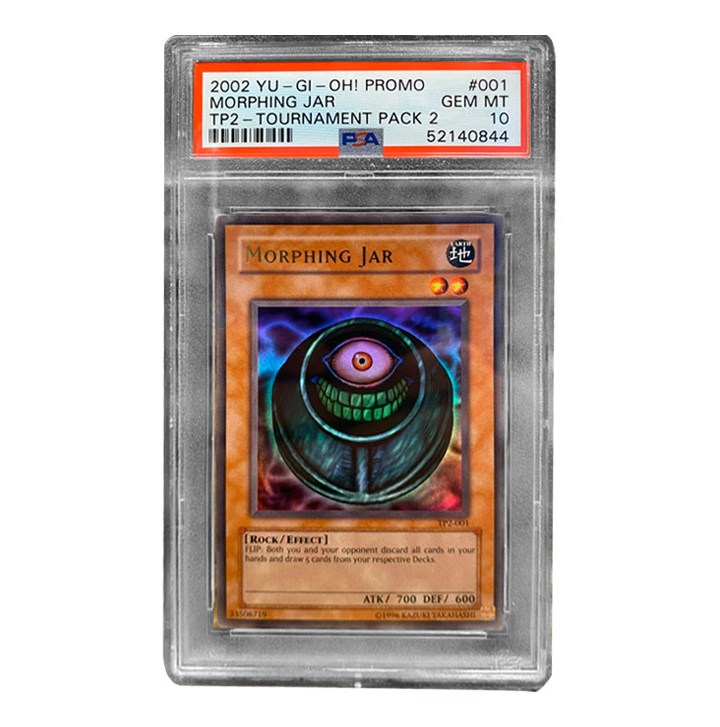 There is nothing remarkable about the artwork on this card, but it has become one of the most collectible of all Yugioh cards. When Morphing Jar is activated during a match, both players discard their cards and draw five new cards, in what can be a sneaky good play when your back is up against the wall.

With a PSA 10 population of only 24, it's no wonder that this tournament pack 2 promo card is so hot and in demand. There are only 92 of them that have ever been graded by PSA, so good luck finding one! 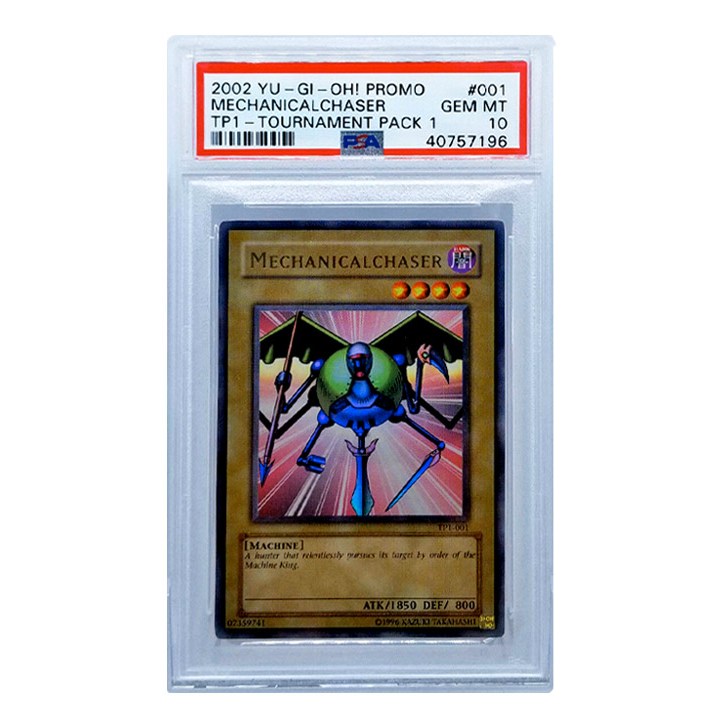 Much like the previously mentioned Morphing Jar, the Mechanicalchaser out of the 2002 Tournament Pack 1 is extremely rare, with only 25 PSA 10's in existence and only 71 total that have been graded. 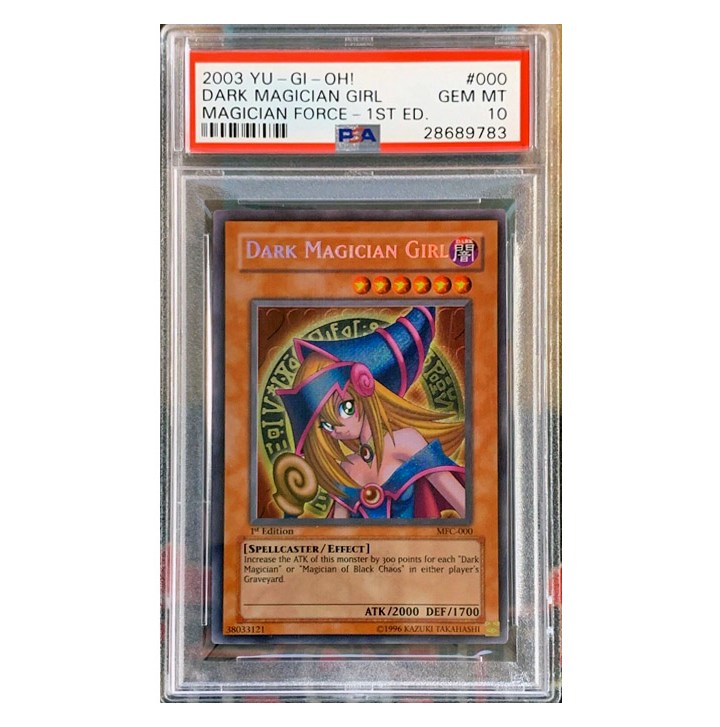 With a PSA 10 population of just 85, this Secret Rare Dark Magician Girl was part of the Magician's Force set, the 8th expansion of the Yugioh TCG. 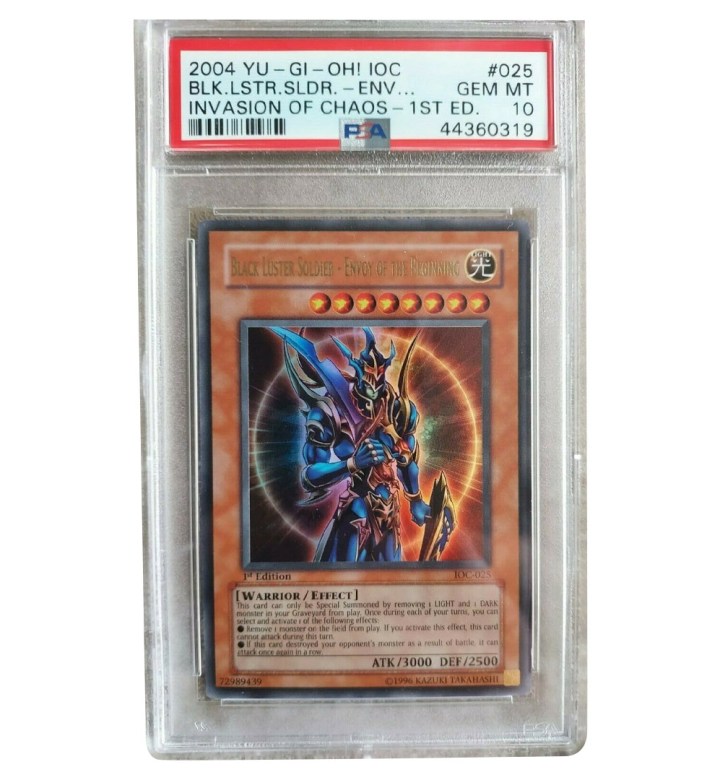 This card came from Invasion of the Chaos booster boxes, which contained powerful "Chaos" monsters. this "Black Luster Soldier - Envoy of the Beginning", "Chaos Emperor Dragon - Envoy of the End" and "Dark Magician of Chaos". These further promoted the use of the already powerful LIGHT and DARK Attributes. 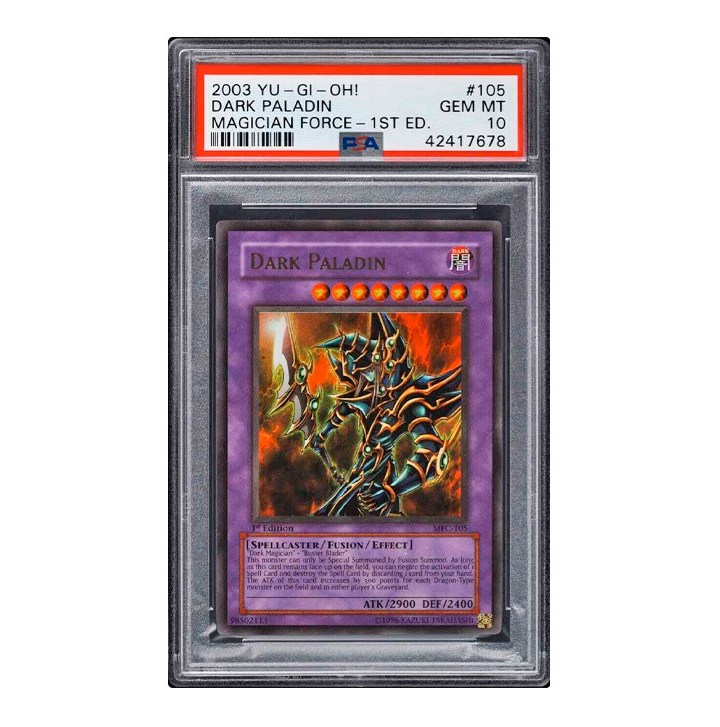 The Dark Paladin is one of the most useful cards in the game. When a Spell Card is activated, you can discard 1 card; negate the activation, and if you do, destroy it. This card must be face-up on the field to activate and to resolve this effect.

There are only 44 of these cards that have been graded, and only 12 PSA 10's, making it one of the rarest cards on this list. 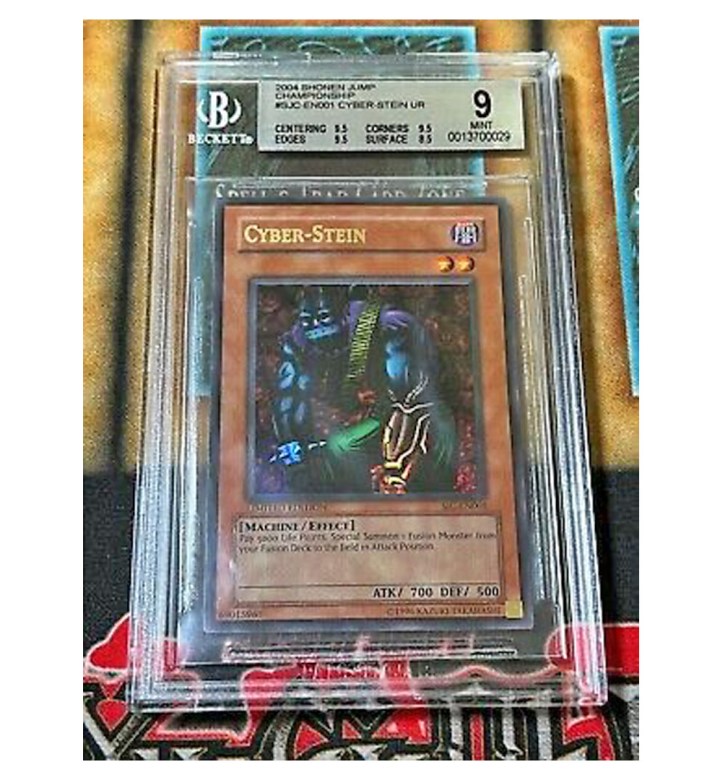 This Cyber-Stein is another one of the Shonen Jump Prize Cards, with this one from 2004. They was given to the winners of the main and side events, and those were the only 2 that were distributed. 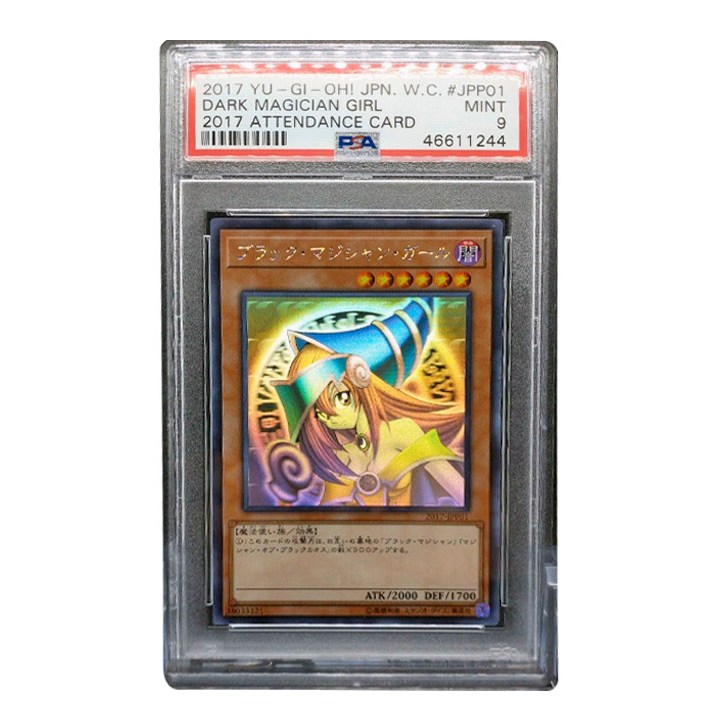 Dark Magician Girl first appears as a character in the Battle City arc when Yugi faces the ex-magician Arkana, whom she defeats by drawing power from both Duelists' Dark Magician cards.

This card was handed out in an envelope for the Yu-Gi-Oh! World Championship 2017 attendants and participants. They were limited to roughly 1000 copies, which makes the card extremely rare. Only 24 of them have been graded by PSA, with just 10 of them receiving PSA 10's. 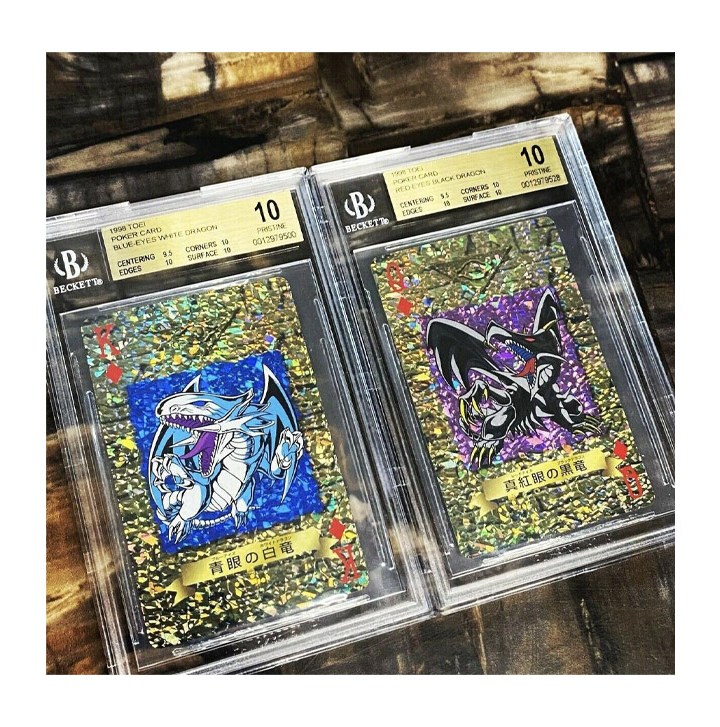 According to the eBay listing, the seller pulled these two cards out of extremely rare sealed 1998 Volume 2 Poker Decks and sent them to BGS, getting 10s on both.

Check out the video and the seller's reaction at the 6:25 mark! 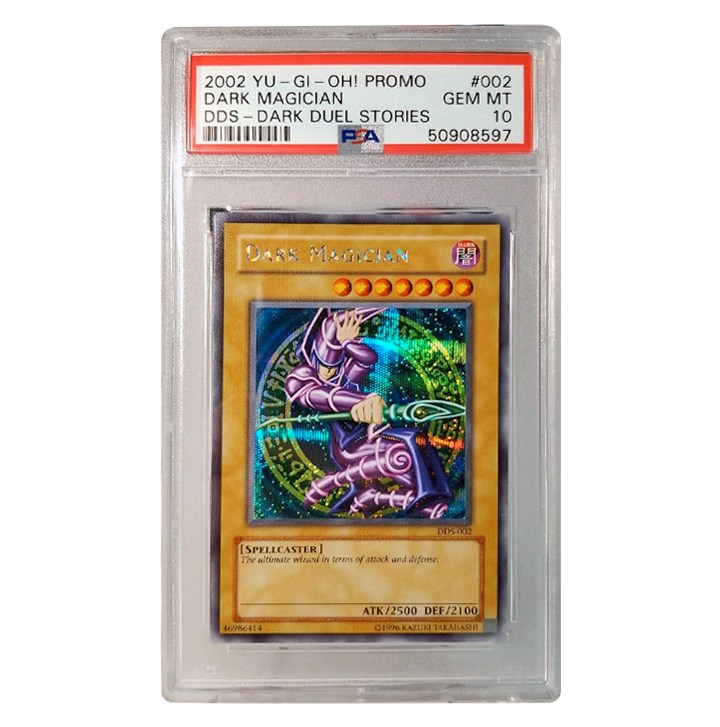 Dark Magician was created when Mahad fused his ba with "Illusion Magician", his ka while fighting Thief King Bakura.

We previously mentioned a Blue Eyes White Dragon from the same promo set at #4 on the list, but this Dark Magician is actually a bit more rare, with only 88 PSA 10's in population. 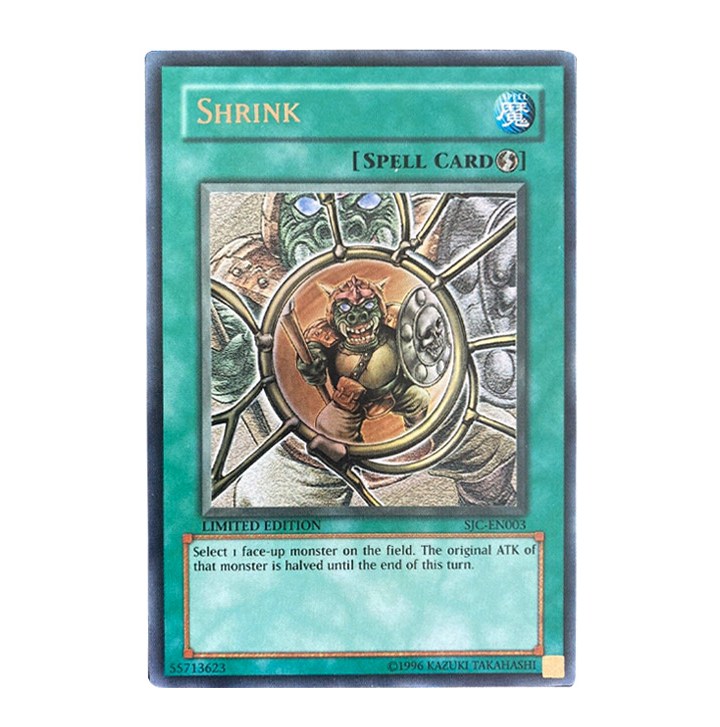 Shrink was first released at the 2006 Shonen Jump Yu-Gi-Oh! Championships, making first editions of the card very valuable. If you can prove that your Shrink is one of these limited-edition prize cards, you have quite a gem on your hands. I would personally get it graded, rather than sell it raw as this seller did, but the near $10,000 final sale price is quite a haul.

This card was sold raw, but to display the rarity, there are only 3 graded examples of this card on record with PSA, with no PSA 10's and only 1 PSA 9. 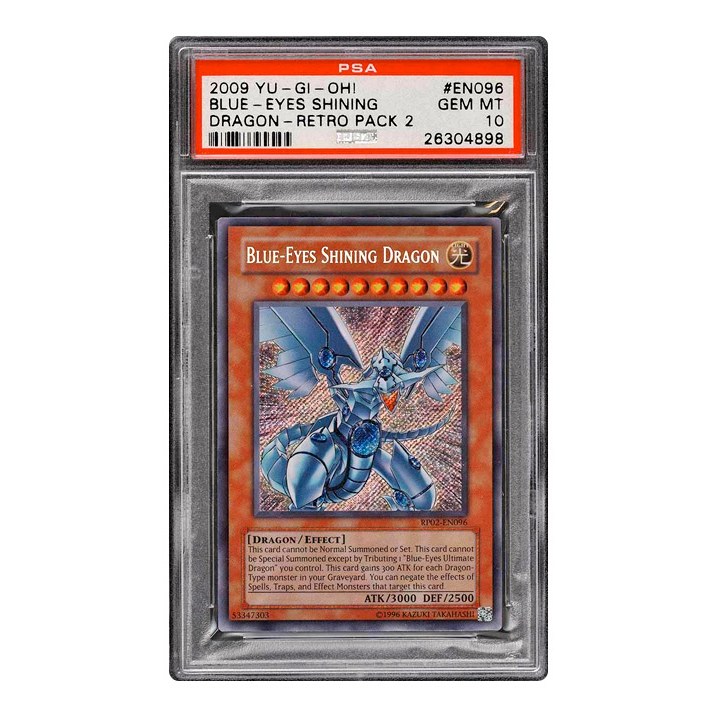 Packed with all-powerful cards, the Retro Pack series was designed to help Duelists collect hard to get and out of print cards. Pokemon often creates similar sets that are wildly popular amongst collectors.

The total number of PSA graded examples of this card is only 88, with just 27 PSA 10's in the population. 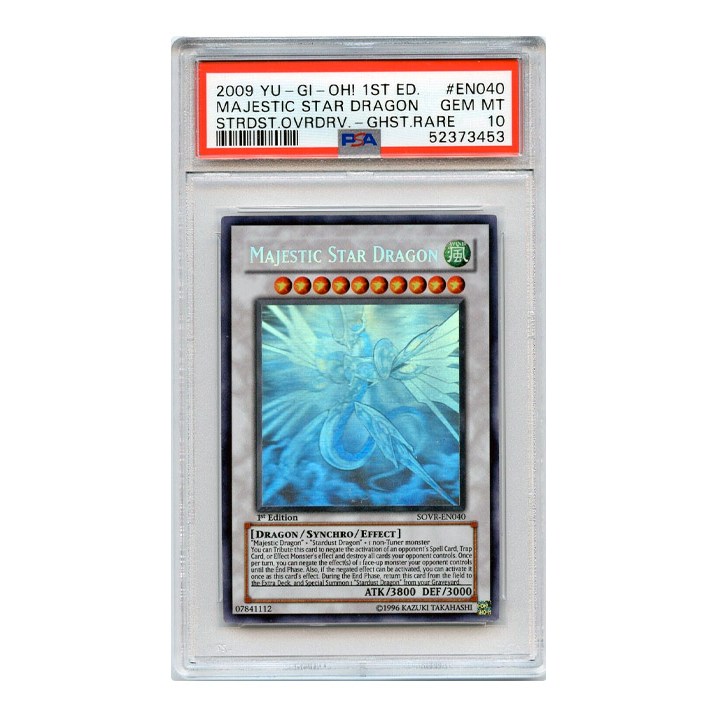 There are only 65 total PSA graded examples of this card with just 22 of them getting a PSA 10 grade. Most of the cards that we talked about on this list were from the original 2002 sets, but this Ghost Rare card has become increasingly popular and it's artwork is regarded as one of the most beautiful in the entire game. 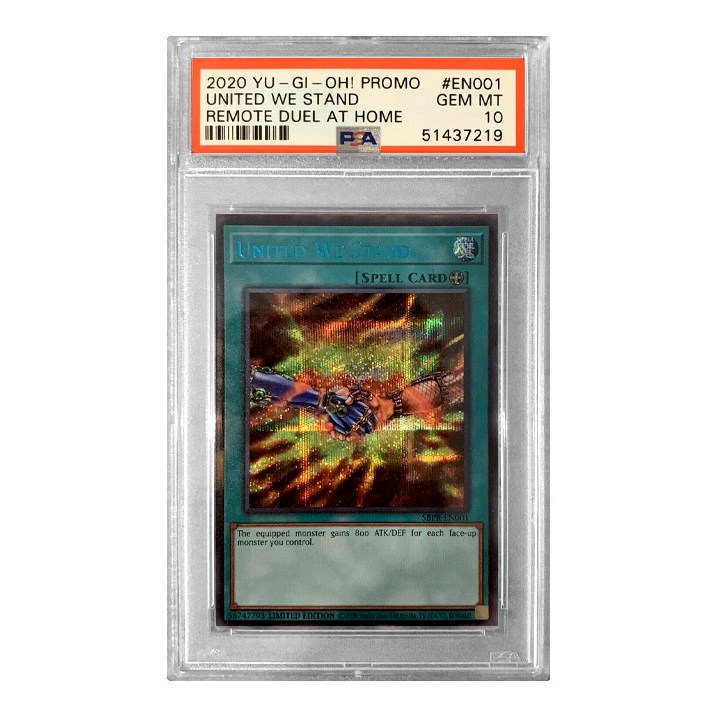 This card was awarded as a Prize for the October 2020 Yu-Gi-Oh! Remote Duel at Home Sweepstakes.

To say that this card is rare would be an understatement, with only 5 of them on record with PSA and 3 total PSA 10's on the planet. With a population that low, and the rising popularity of Yugioh cards amongst collectors, the sky is the limit for this card in future sales. 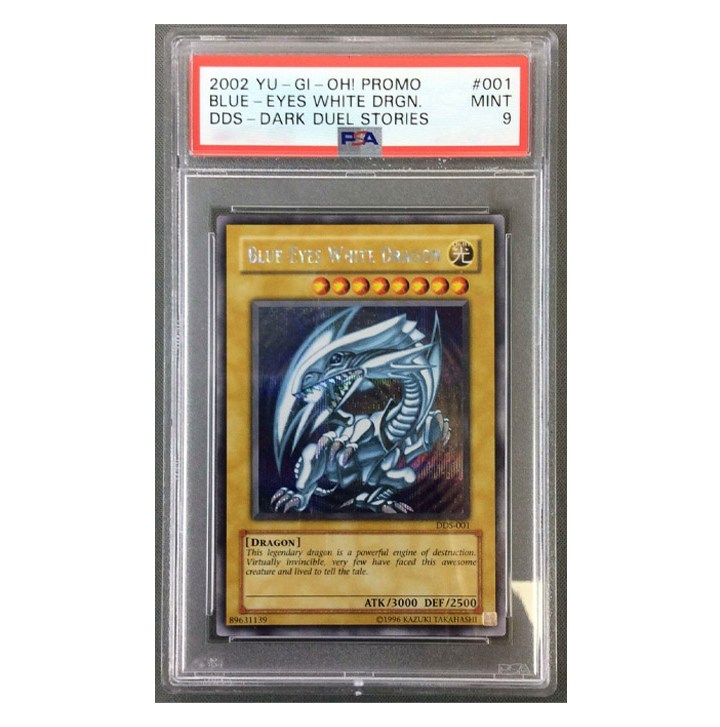 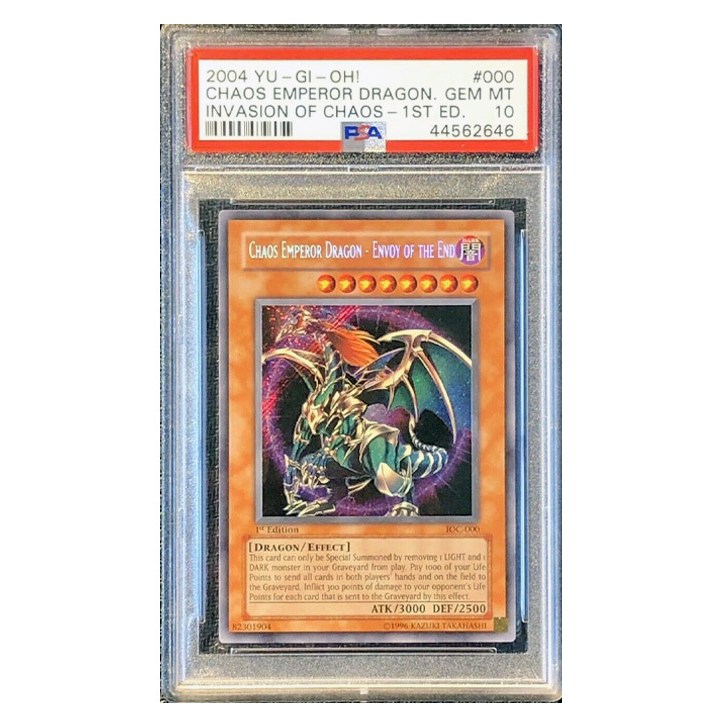 The Invasion of Chaos is a booster pack that combined the Japanese sets, "The Controller of Chaos" and "Invader of Darkness".

This particular card has a PSA 10 population of just 71.

Which of these Yugioh cards are your favorite? Hit us up on Twitter @137pm and let us know!