Most Valuable Batman Cards Ever Sold 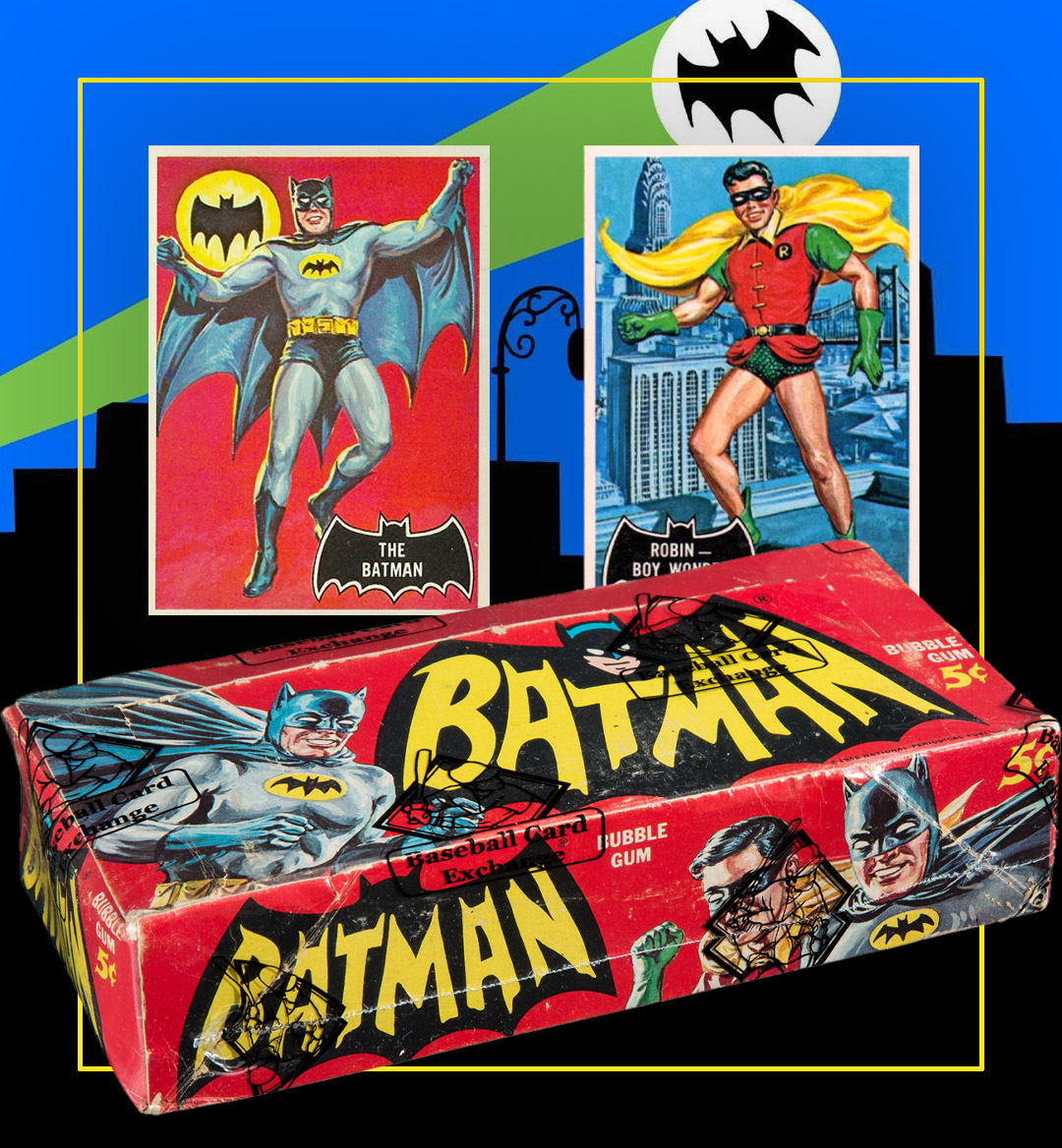 In this article, we will do a deep dive in to all things Batman trading cards and give you a list of the most valuable ones ever sold. But before we go there, I'd like to give some history around the "Caped Crusader" and how the franchise has evolved over the years.

Matt Reeves’ The Batman, which premiered in March, has brought about a great resurgence to the masked vigilante’s fandom.  The film stars Robert Pattinson as the caped crusader, but this Bruce Wayne is a sharp contrast from Christian Bale’s suave interpretation of the character or Ben Affleck’s ruthlessness.  Instead, Gotham’s much-needed hero must fight serious internal battles, all while deciphering a sinister plot concocted by The Riddler, played by Paul Dano.  If you haven’t watched it, I highly recommend it.  Just make sure you have a clear schedule to make way for the 3-hour runtime.

Batman’s long and storied history doesn’t just revolve around this newest rendition, however.  Fans of the character have been enthralled with the Dark Knight since his first comic book appearance in May 1939. That first comic, which is a highly sought-after collector’s item, has since spawned numerous films, television series, video games, and of course, trading cards.

How Many Different Batman Card Sets Are Out There?

Later in the article, we will touch on some items from these later sets that have little sales history but may make this list down the road.  These include the autograph sets in 1997 Skybox Batman & Robin and 2005 Topps Batman Begins.

An additional caveat would be Hro’s new hybrid NFT trading cards, which debuted this year.  The cards can be purchased in a physical format, and they include a redemption to a digital copy as well.  We decided to exclude them from today’s list, but they are an interesting concept to look out for soon.  Some versions, which feature epic artwork of Batman, have brought 4-digit sales to eBay already.

Now, let's get in to exactly why you're here:

The 10 Most Valuable Batman Trading Cards 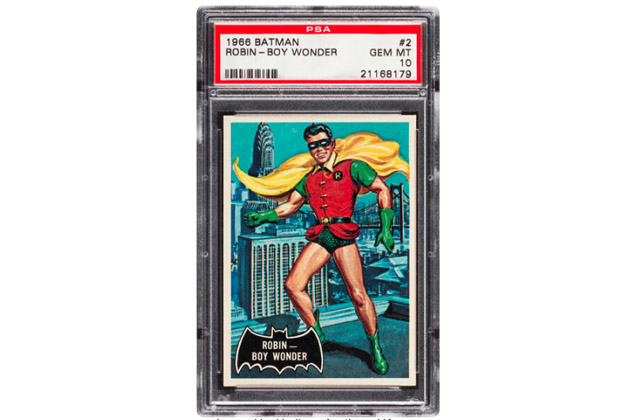 So the most valuable Batman card … isn’t a card of Batman himself?

This card is no dud, though.  The crisp, white borders remain flawless and the phenomenal artwork shows off a little bit of Gotham’s skyline, where a Chrysler-esque building stands tall in the background.

Furthermore, Robin also isn’t a stranger to the limelight.  His first on-screen appearance came in 1966 when actor Burt Ward portrayed the young Dick Grayson.  1997’s not-so-critically acclaimed Batman & Robin saw Chris O’Donnell take a stab at the legendary sidekick.  In addition to the big screen, series like Teen Titans and Teen Titans Go! have put The Boy Wonder into a protagonist role as he fights villains with other teenage heroes. 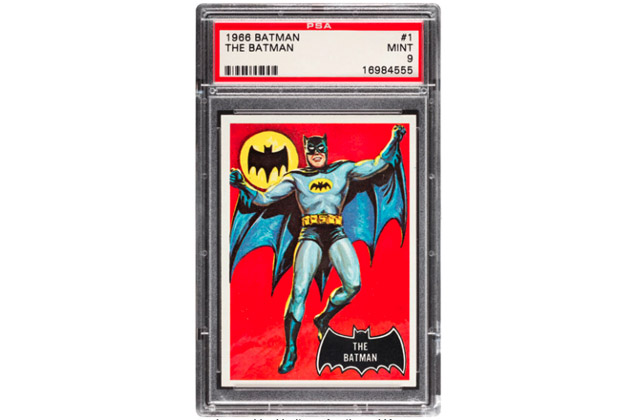 Here we have the most iconic card of our titular protagonist.  This crisp copy of the caped crusader is limited to just a POP 11 as a PSA 9, which is almost unheard of for such a highly coveted character.  For comparison, there are 74 known PSA 9’s of the 1977 Topps Luke Skywalker and 251 graded PSA 9’s of the 1990 Marvel Universe Spider-Man.

But besides the rarity of the card, just look at how awesome it is, with Batman a little bit more light-hearted than Pattinson’s dark and eerie rendition.  Legendary actor Adam West is the man behind the mask in this illustration, and his suit’s spandex material and bright colors transport collectors back to a different time for the Batman.

This card also sold at auction in January 2022 but had sold for just over $3100 in 2018, which marks a nearly 486% increase in 4 years – quite a nice return from Gotham’s protector! It is also worth noting that a PSA 8 brought $9,000 this year as well, further cementing the growth of these high-grade copies.  We decided to exclude it from the list to showcase more items from different sets, but if a PSA 10 were to ever surface, it would surely rank #1 on our list of most valuable Batman cards by quite a margin.

Even still, there are ample lower-grade versions of The Batman #1 available on eBay and other auction houses. 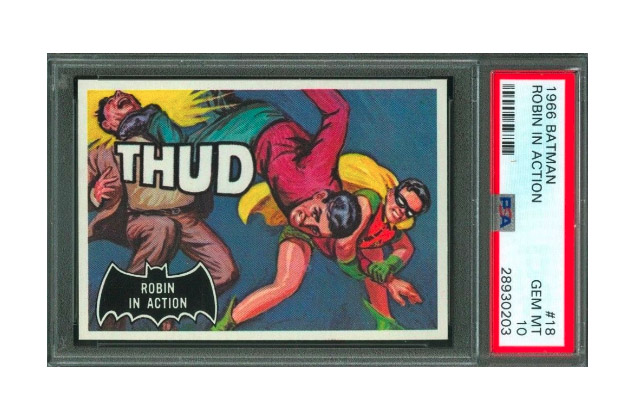 Another example of the power of the PSA 10, this card features the iconic onomatopoeia (THUD!) from the early television series.

The artwork from this card is a perfect reason to bring up the illustrator of the 1966 set, Norman Saunders. Saunders’ prolific art style is featured in other Topps sets over the years, but the vibrant hues and details are part of what makes these so special. 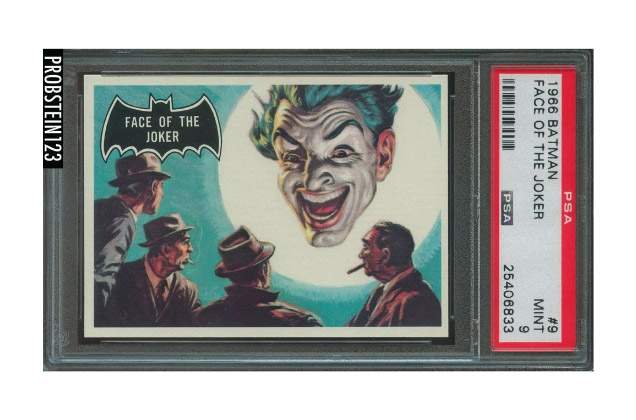 This list deserves a better class of criminal.  Perhaps the most famous comic book villain, this is the Joker’s first cardboard appearance.  It features several crime bosses looking at the Clown Prince of Crime with great uncertainty, much like the “Kill The Batman” scene from The Dark Knight.

This POP 15 copy sold in February, and there is only one PSA 10 in existence. 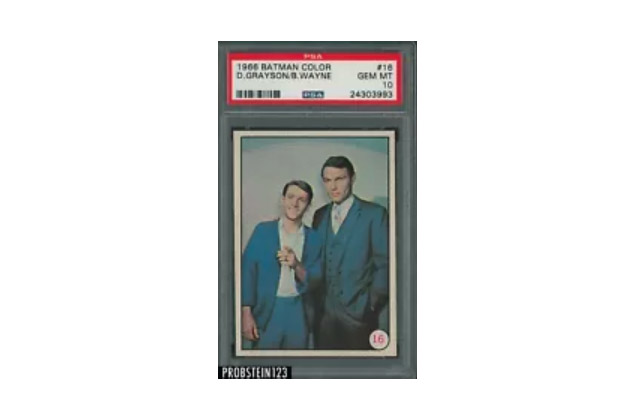 Our first live-action card on the list, this card last sold in October 2021 and offers a rather debonair look at the aforementioned Adam West (right) and Burt Ward (left).

These photographic cards come from the “Bat Laffs” set, offering a more candid look at our favorite characters.  And yes, this gem is a POP 1. 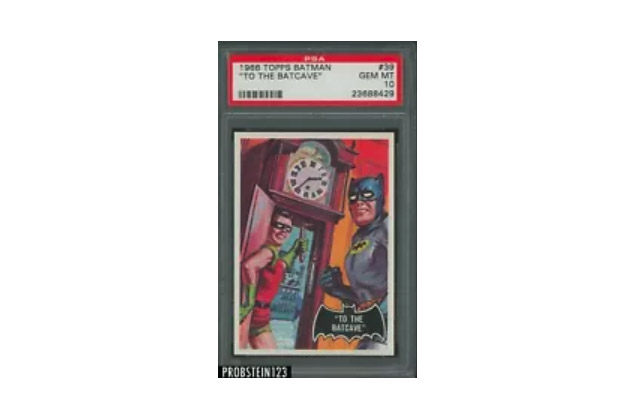 The pristine copy of this card offers a glimpse into Wayne Manor, as the dynamic duo heads into the Batcave to save Gotham.

What we have here is yet another testament to Saunders’ tremendous artwork, and it currently sits as a POP 2.  It last sold in October 2021, and CardLadder currently values it at $2,473. 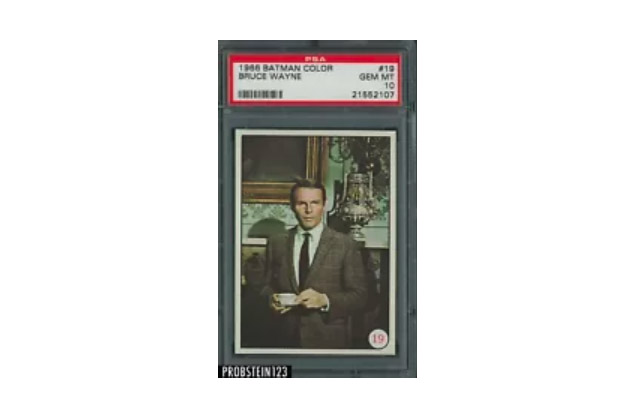 Here we have another look at the billionaire Bruce Wayne from the Bat Laffs set.  It's interesting to see a pretty basic photograph of Adam West bring so much at auction, but the simplicity of these older sets is part of what makes them so desirable. And of course, the pure rarity of a perfect PSA 10 helped this card reach its October 2021 sale price.

The slab listed above is the only PSA 10 in existence, so we will have to see if it retains its spot on our 10 most valuable Batman cards list during future auctions. 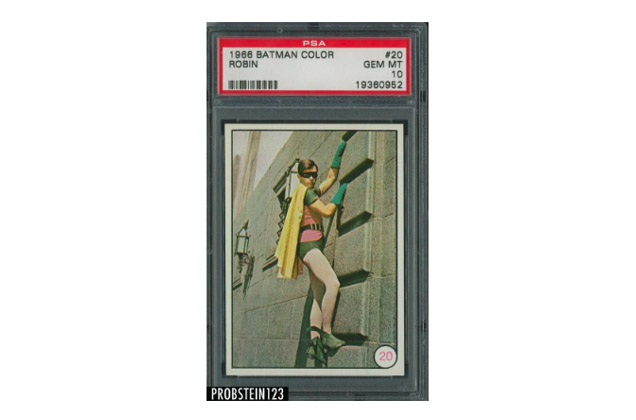 Our 3rd feature from the Bat Laffs set, #20 in the set is an action shot of Robin scaling a building in full costume.

One thing worth pointing out is that there have only been about 3,000 cards from the Bat Laffs set to ever be graded by PSA, perhaps indicating the rarity of the vintage Batman market even further.

This gem (POP 1) also sold in October 2021.  It seems as if a big Batman collector liquidated at the right time. 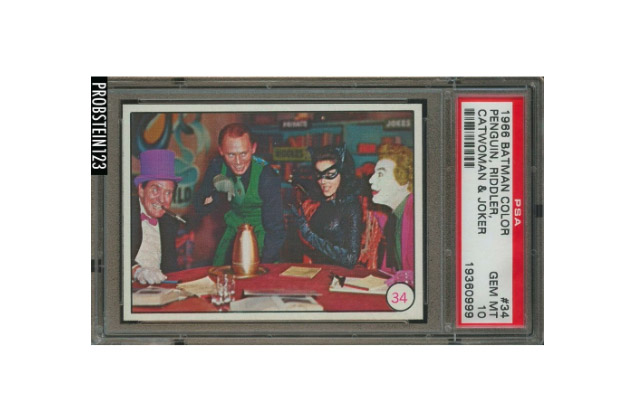 I wonder what devious scheme is being brewed at this table.  A crossover of four major villains, this is the last card from the Bat Laffs to make our list.  It's a POP 1, and this beauty also sold during October 2021 (We are sensing a theme).

Coincidentally, all four of these foes appeared in some capacity in this year’s The Batman, each giving memorable performances in their own right. 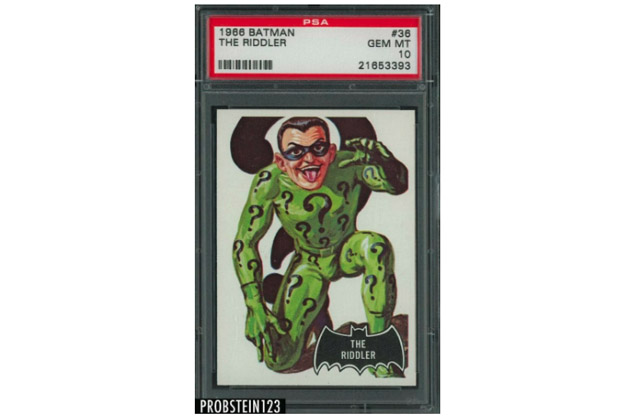 My final addition to our list of most valuable Batman cards is a PSA 10 of the puzzling antagonist in The Batman.  The Riddler was originally played by Frank Gorshin in the 60s TV series and was revamped by Jim Carrey in 1995’s Batman Forever.  However, it is Paul Dano’s utterly scary interpretation of the character in the newest feature film that brings a new level of value and demand to this card.

What's Next For Batman Cards?

Overall, the Batman market has grown stronger based on pure rarity and the hype circulating the new movie.  With the announcement of a sequel, it will be interesting to see if some lesser-known sets bring a pretty penny at future auctions and crack our most valuable Batman cards list in the future.

Some of these include the Mr. Freeze and Batman autograph set from 1997 Skybox. Perhaps the "Caped Crusader" is due for a new autographed collection from its new iconic actors.  Regardless,  Gotham’s masked vigilante is sure to have an impact on the non-sports card market for years to come.

To learn more about Batman LEGO, check out this article!

Click here to learn more about all of the Batman movies.

For all things Batman video games, check this out!

Check Out these Related Stories!