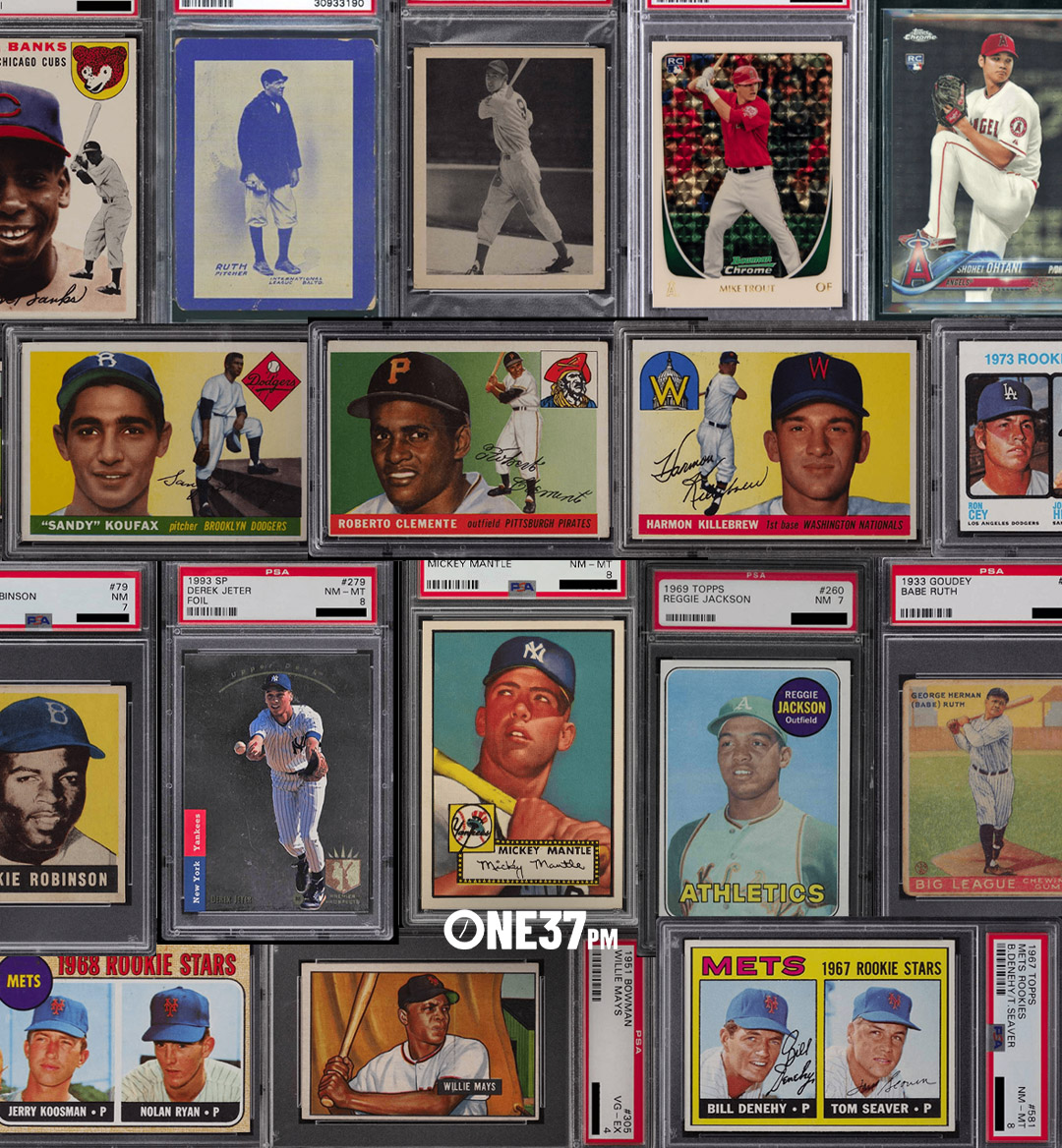 Out of the top 10 most expensive trading cards ever sold, baseball has 5 on the list due to its rich history as a sport and strong collector base. The nostalgia for these cards spans the history of the sport, and brings some fascinating stories and the rediscovery of MLB legends.

Below is a list of the 25 most valuable baseball rookie cards spanning Babe Ruth and Mike Trout. Each card tells a story about the player and his accomplishments, as well as imagery that can sweep holders back to a specific time period of the sport. 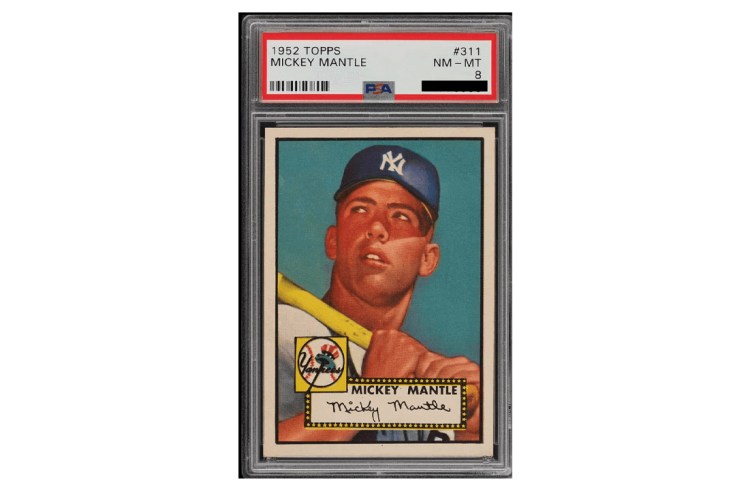 Originally, many more copies of this card had been produced, but due to lack of interest, the producers dumped an estimated 300-500 cases of the 1952 Topps set into the ocean.

Technically, the 1951 Bowman #253 is the first Mickey Mantle card, but this is the first Topps produced Mante card, it is widely recognized as his key rookie card and is valued accordingly.

Mantle, a Hall of Famer, played 18 seasons for the New York Yankees and is a 7-time World Series champion. 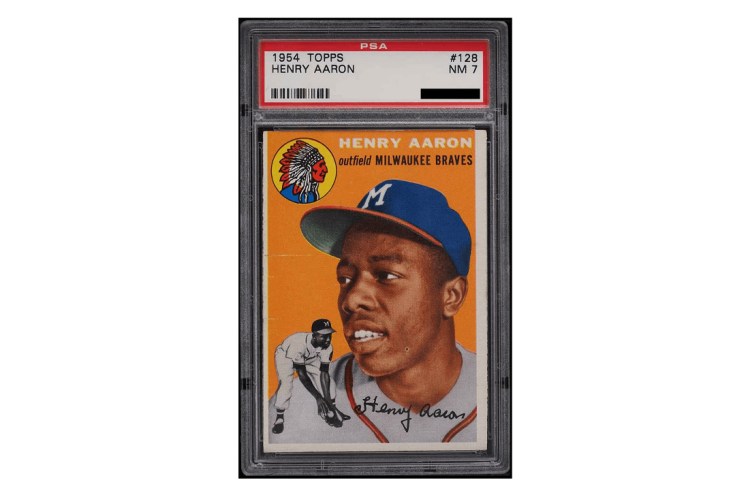 Hank Aaron played in the MLB for 23 seasons and is second all-time in home runs. He’s won 1 World Series and made a record 24 All-star appearances. 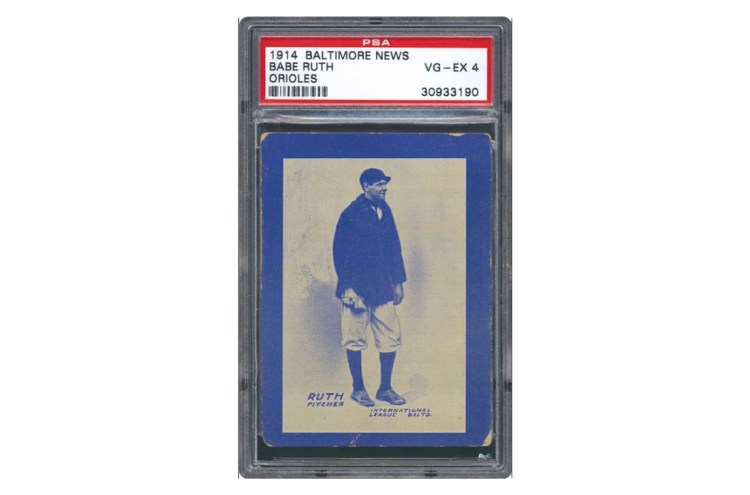 Before there was Mickey Mantle and Hank Aaron, there was Babe Ruth who played 22 seasons, his 714 home runs and is a 7-time World Series Champion.

Ruth’s style of play also had a lasting impact on the game of baseball and the fan experience. He was the first player to hit 60 home runs in a season, and his power-hitting style helped put the Yankees franchise on the map. Attendance doubled after Ruth came to the Yankees.

Ruth arrived in New York by way of the trade from the Boston Red Sox, the 2nd worst trade in MLB history.

Ruth’s “prospects” card from 1914 features him during his time in the minor leagues. The Baltimore News card depicts him as a member of the Baltimore Orioles, which is valued at $5.94 million and is being offered by Collectable as a fractionalized investment opportunity. 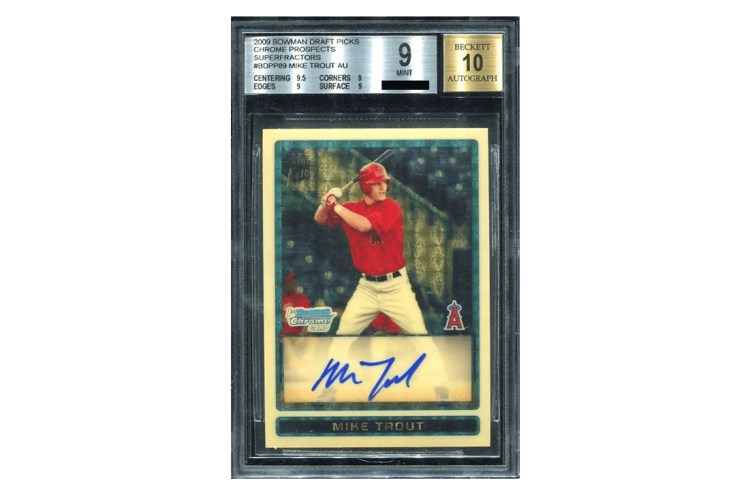 Mike Trout has played 11 seasons so far in the MLB, and while he hasn’t yet won a world series, there’s data to support him being the best player in history. He’s under 30 years old and has an astonishing .305 batting average with 310 Home Runs and 816 RBIs so far in his career.

He’s a 9-time MLB all-star and has won the American League MVP 3 times, finishing second in four other seasons.

Trout is the first modern player on the list, which means an introduction of rookie cards with parallels. Parallels are shorter print cards that have different visual characteristics. In this case, we have a population of 1 Superfractor card. 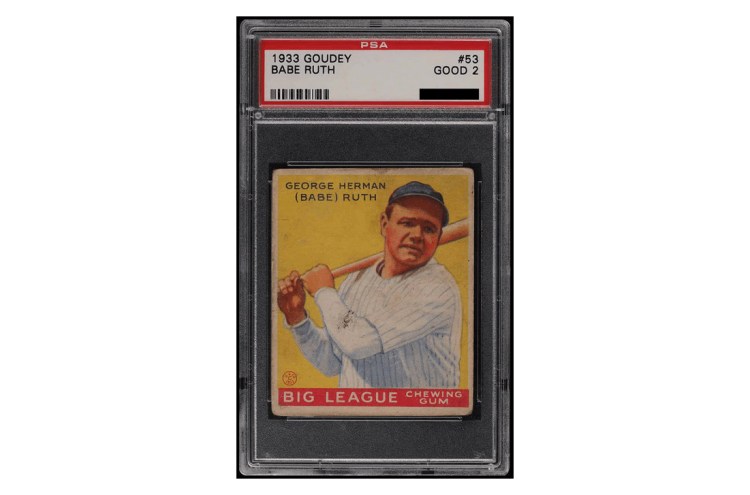 The 1933 Goudey Babe Ruth is widely recognized as his professional rookie card despite other cards released prior to this set. 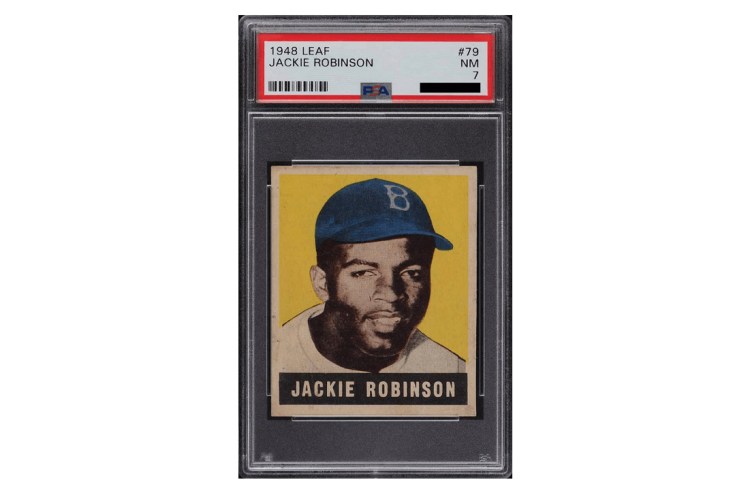 Jackie Robinson was the first African American to play in the MLB, winning the National League’s Rookie of the Year in 1947 and the most valuable player in the National League in 1949. He also won 1 world series and was inducted into the Hall of Fame in 1962. 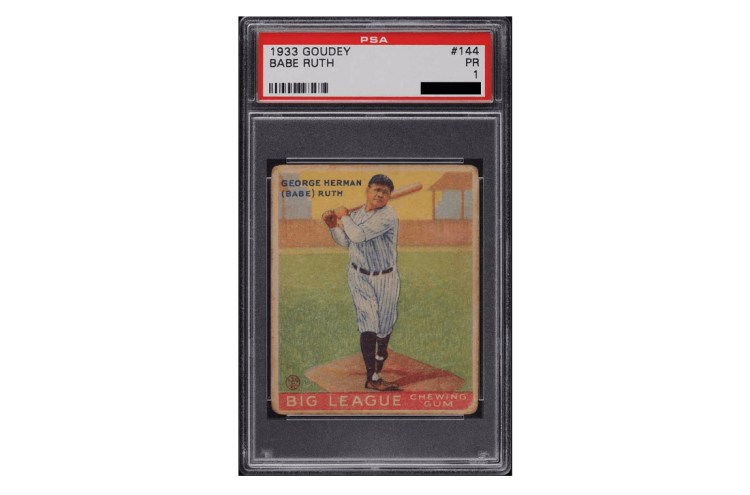 The 1933 Goudey set, widely recognized as Ruth’s official rookie card (despite it being released later in his career) contains four Ruth cards. Some variations are rarer and more desirable than others. 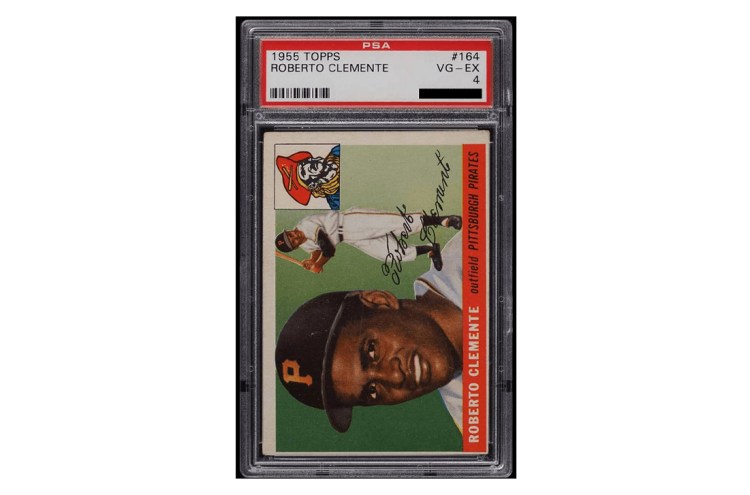 Roberto Clemente played 18 seasons of major league baseball, all for the Pittsburgh Pirates. Clemente died at a young age in a plane crash, and shortly after his death, he was elected into the Hall of Fame. The mandatory 5-year waiting period for the hall of fame inductions was waived for Clemente given his on-field accomplishments and tragic death. 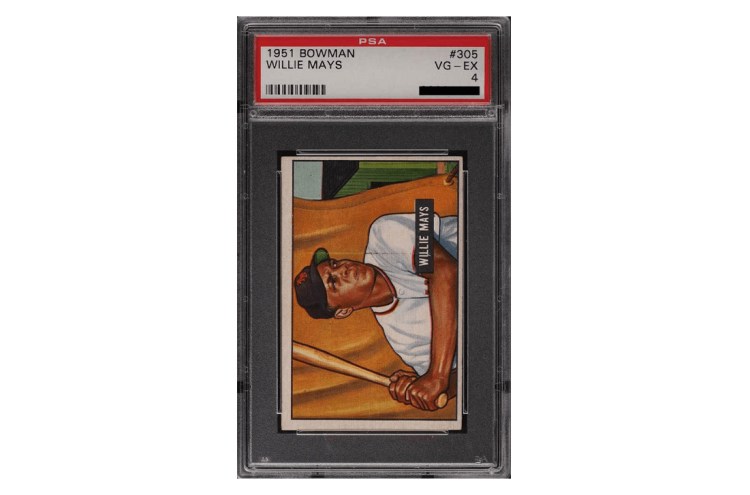 This 1951 Bowman Willie Mays card comes from the same set as Mickey Mantle's first card. It is Mays’ only rookie card.

Mays had a highly accomplished career and was the first player in MLB history to smash 50 home runs and steal 20 bases in one season. He’s also just one of 18 players to hit four home runs in one game.

He’s a 24-time All-star, 2-time MVP, and a one-time world series champion and was inducted into the Hall of Fame in 1979. 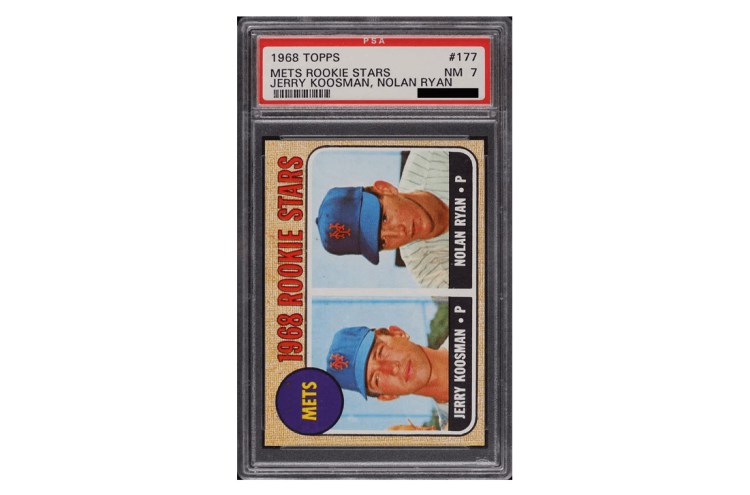 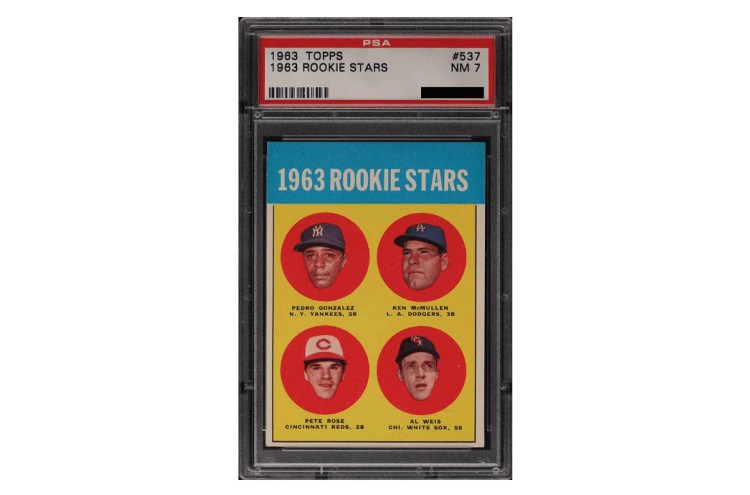 Pete Rose played the most games of any player in the MLB (3,562) and holds the record for most hits (4,256). He was a 17-time NL All-star and won 3 World Series. He is not a Hall of Famer, as he was banned from the game of baseball due to gambling. 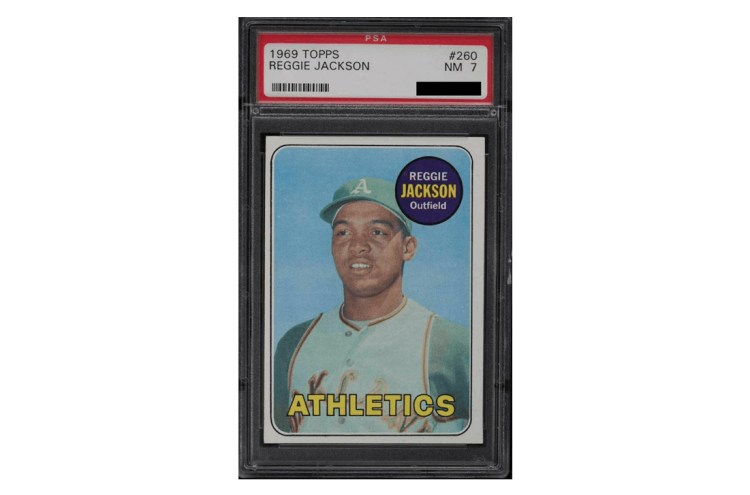 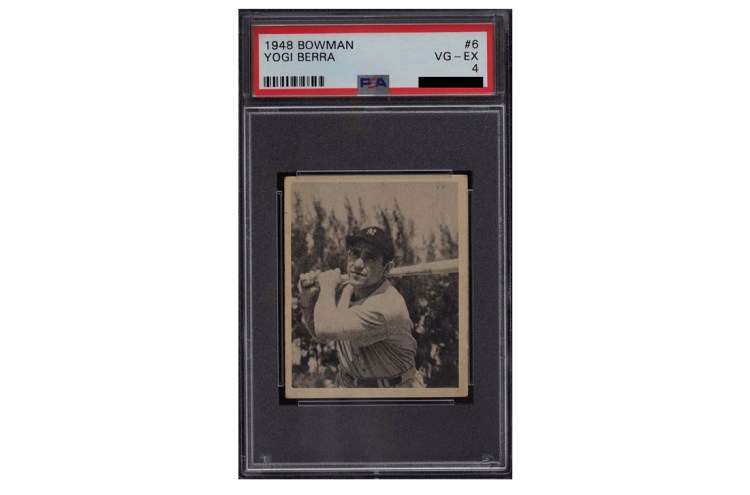 Yogi Berra played 19 seasons, was an 18-time All-Star and won 10 World Series. He spent 18 seasons with the New York Yankees and has the most World Series rings of any Major League baseball player. 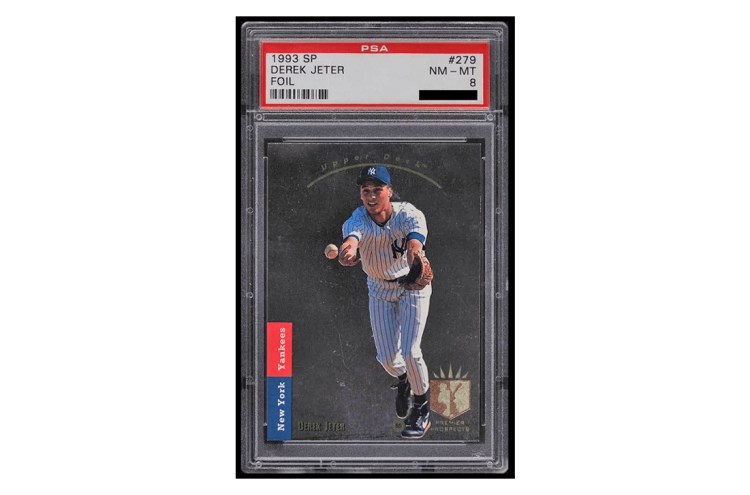 Derek Jeter is a 5-time world series champion (including 1 World Series MVP award) and had over 3,000 hits during his career with the New York Yankees. Jeter was elected into the Hall of Fame in 2020 and is currently the CEO of the Miami Marlins. 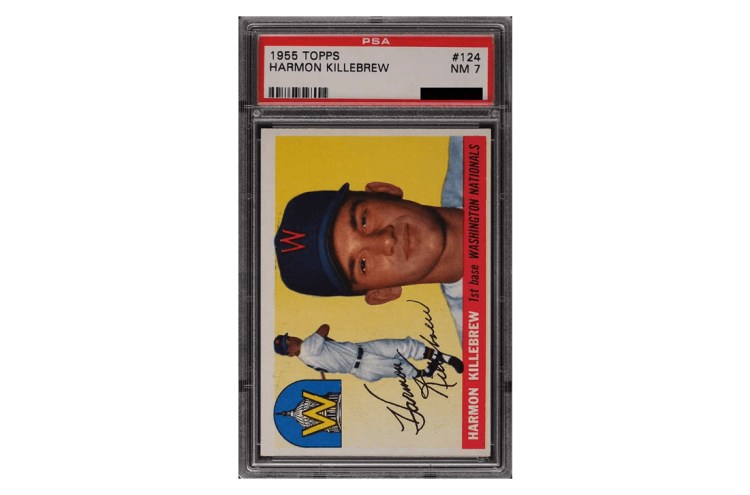 Harmon Killebrew spent the majority of his 22-year career with the Minnesota Twins and is 12th all-time for Home Runs. The Hall of Fame first baseman played in one World Series, but the Twins lost to the Dodgers in that series. 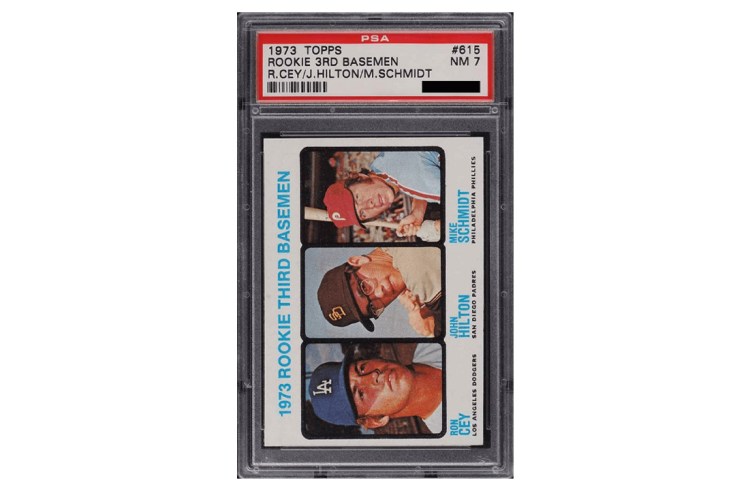 Mike Schmidt played 18 seasons for the Philadelphia Phillies as a 3rd baseman, was a 12-time All-Star and a one-time NL MVP. He also led the National League in home runs 8 times. He was also the World Series MVP in the Phillies’ first-ever franchise World Series Victory. 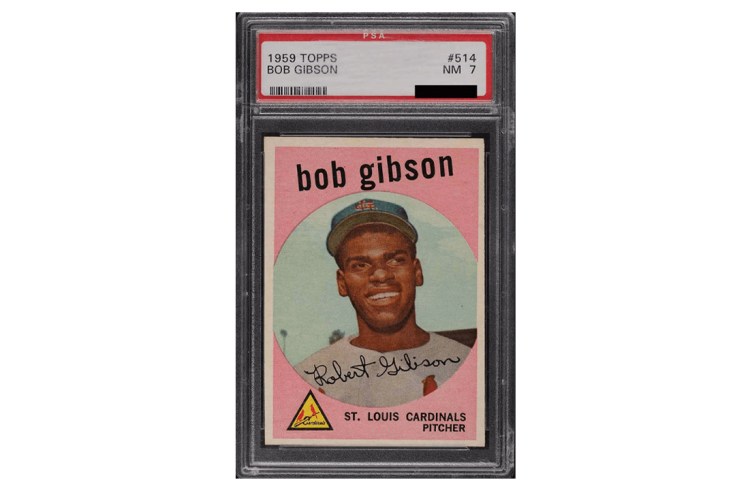 Bob Gibson played 17 seasons for the St. Louis Cardinals and is the second pitcher on our list. He’s a 9-time All-Star and a 2-time World Series champion with a 2.91 career ERA.

He’s also known for his 1968 season, where he had a 22-9 record, 13 shutouts, 268 strikeouts and an astonishingly low 1.12 ERA. It’s recognized as the best statistical full season for a pitcher of all-time. 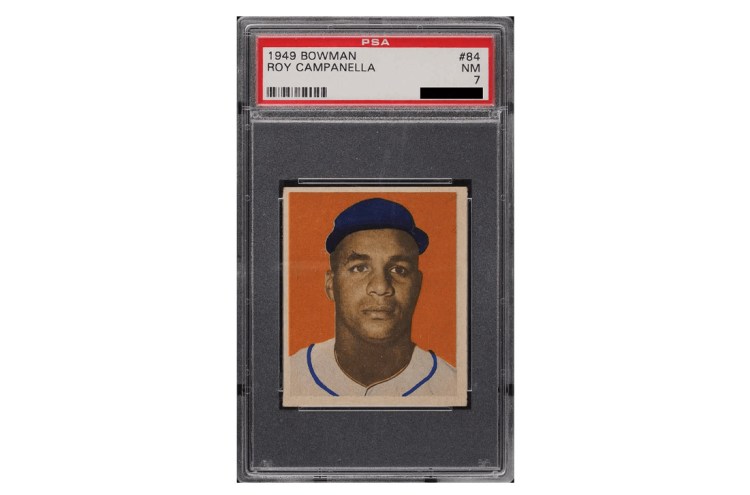 Roy Campanella played for the Brooklyn Dodgers for 10 seasons as a catcher and was elected into the Hall of Fame in 1969. His career was tragically cut short after being paralyzed in a car accident.

Campanella is also credited for paving the way for the MLB to break the color barrier. 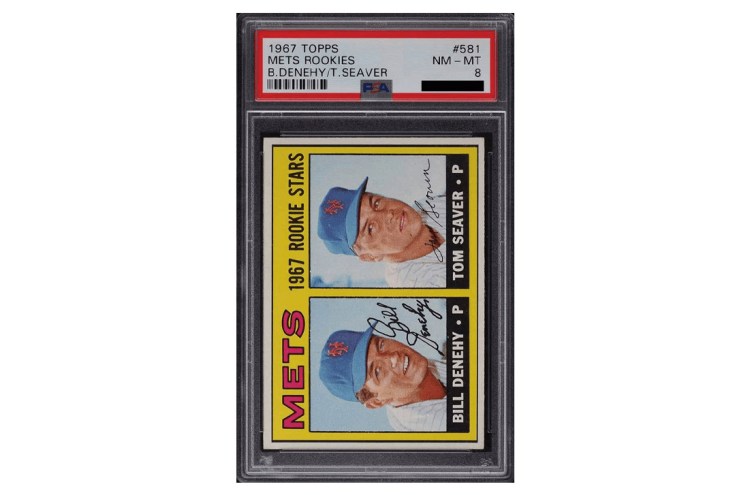 Tom Seaver was a Hall of Famer pitcher for the New York Mets finishing his career with 311 wins, 3,640 strikeouts, 61 shutouts and a 2.86 earned run average.

Seaver was part of the 1969 Miracle Mets World Series winning team and holds the record for consecutive strikeouts (10) in a single game. 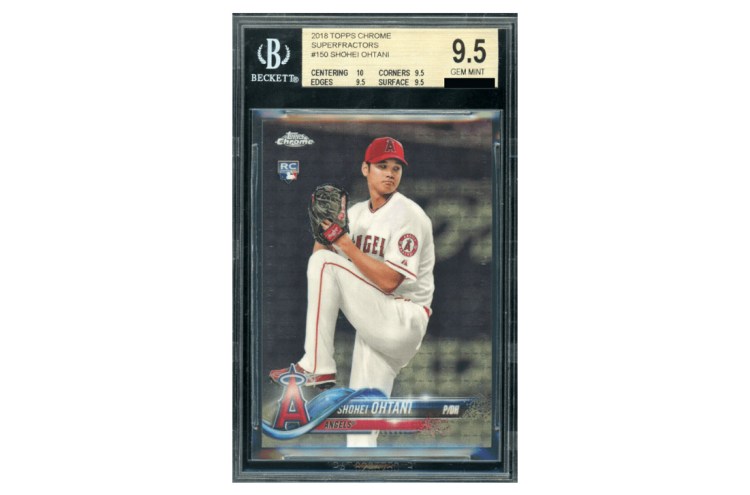 Ohtani is in just his 5th season in the MLB but is making waves as a successful two-way player. 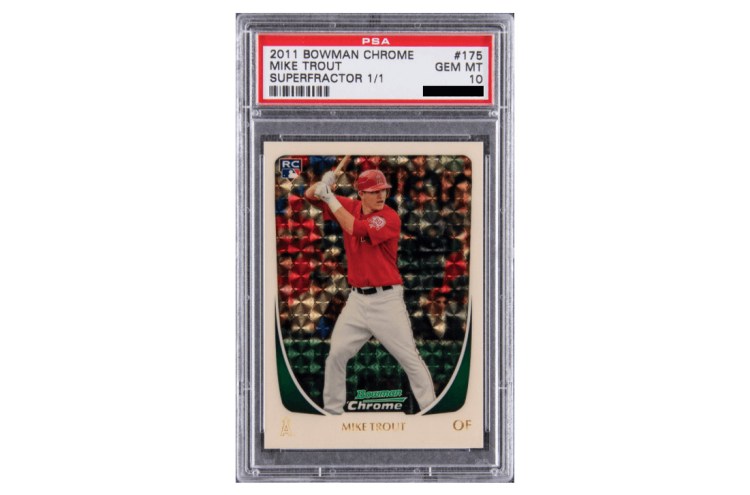 This card was released in 2011, two years after his 2009 Bowman Chrome Prospects card, but is still considered to be a rookie card (and is branded as such on the top left of the card).

This is another 1/1 Superfractor and is graded in mint 10 condition. 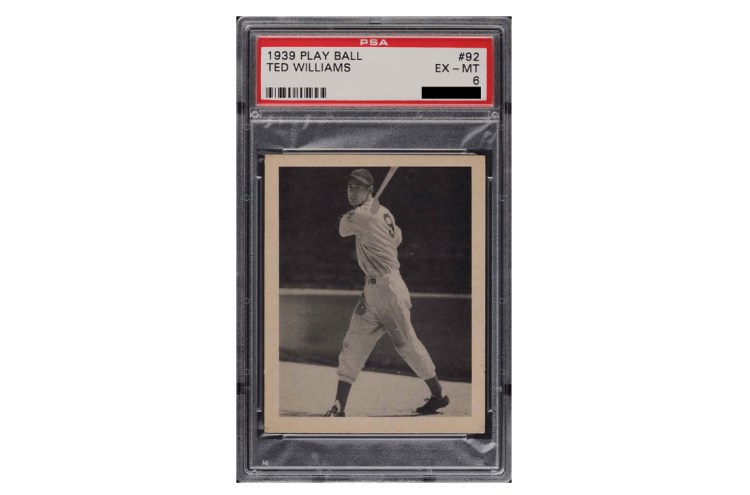 Ted Williams played 19 seasons for the Boston Red Sox despite missing seasons in his prime due to military service. He’s sometimes referred to as the “greatest hitter of all time”. He was elected into the Hall of Fame in 1966 and finished his career with 521 Home Runs (20th) .344 batting average (11th) and was a 2-time MVP and 19-time All Star. 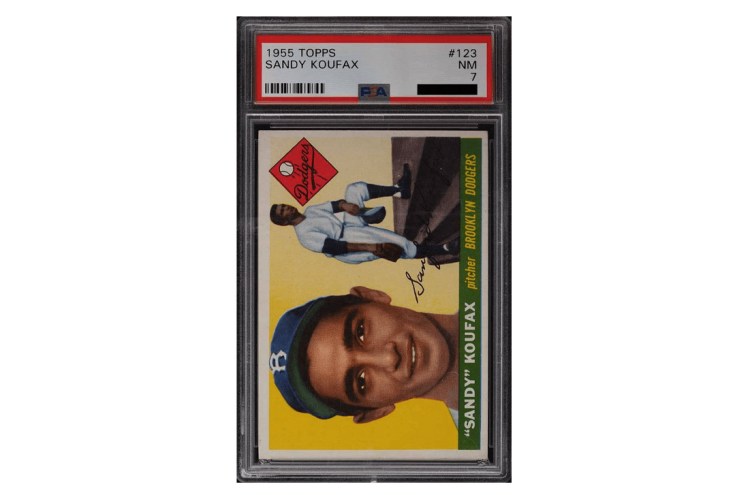 Sandy Koufax compiled a 165-87 record over his 12-year career with an earned run average of just 2.76 and was inducted into the Hall of Fame in 1972. He had to end his career early due to an elbow injury. In 1963, Koufax won 25 games with a 1.88 era and 11 shutouts. He won the Cy Young Award and NL MVP that season. Koufax won 2 World Series with the Los Angeles Dodgers and put up phenomenal performances in each series. 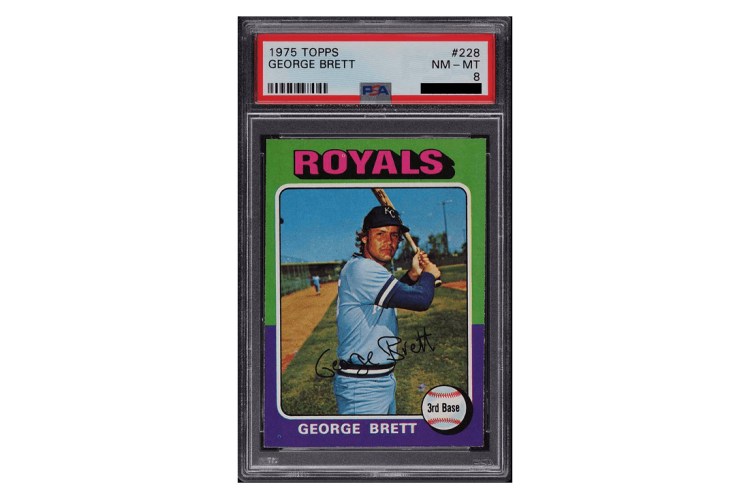 George Brett is a Hall of Fame 3rd baseman who played 21 seasons with the Kansas City Royals. He helped the Kansas City Royals win its first World Series in 1985 (he homered 3 times and hit for an average of .348). He’s a 13-time All Star and holds the 2nd highest batting average (.390) for a single season. 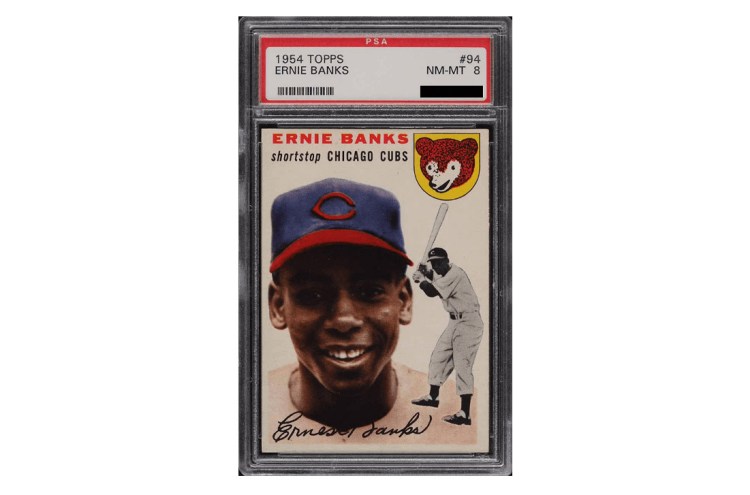 Ernie Banks was a 14-time All Star, 2 time NL MVP and 2 time NL home run leader for the Chicago Cubs. Although Banks never won a world series with the Cubs, he was elected into the Hall of Fame in 1977 and was named to the MLBs All-Century team in 1999.