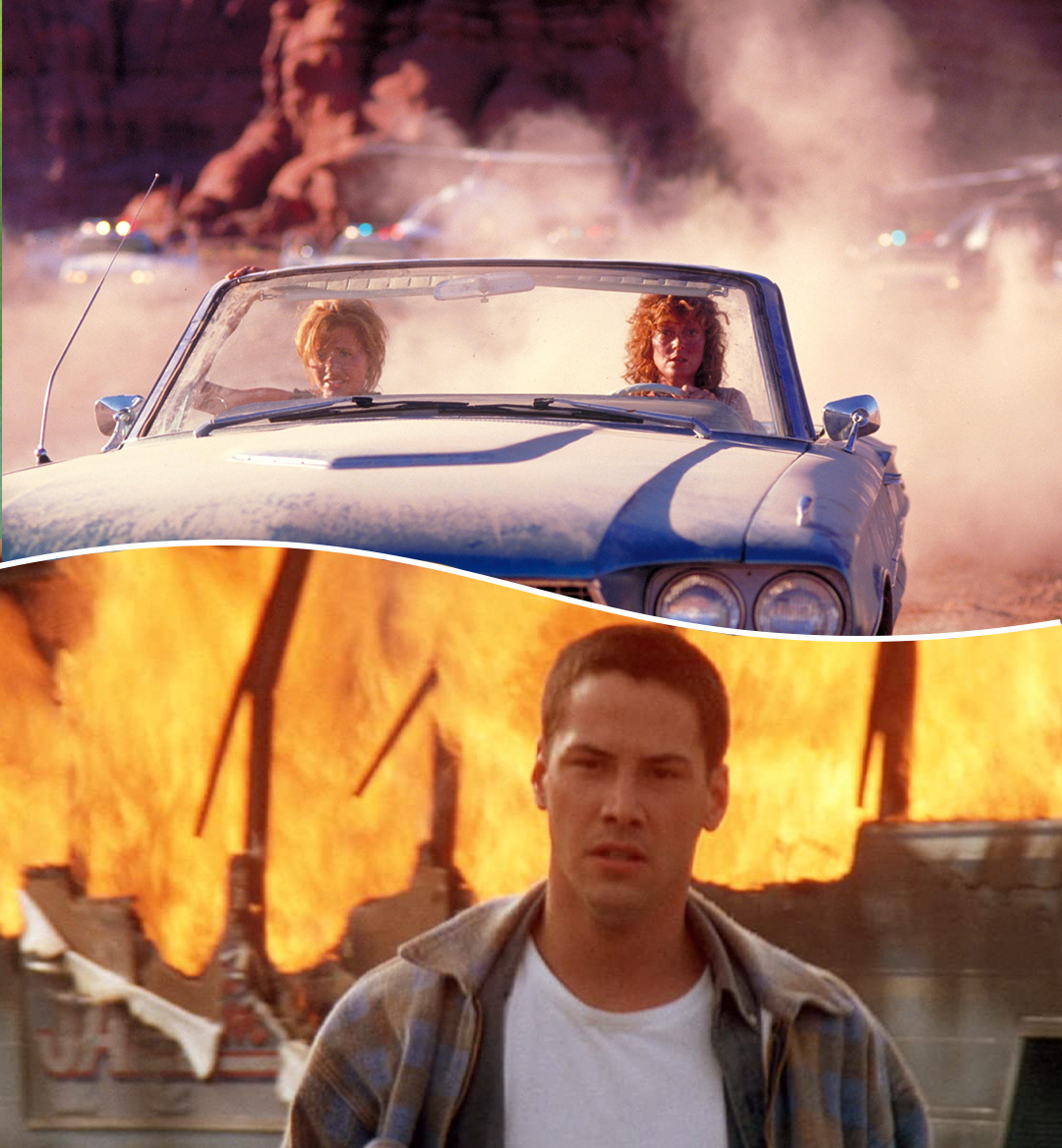 Will we ever get sick of talking about Top Gun? Probably not. But to be fair, we can't just keep watching the film and its sequel over and over again—well, we could, but maybe we shouldn't. Sure, there's no film quite like that one, but there are a few that have similar vibes and circumstances going on. So, in no specific order, these are 12 of the best movies like Top Gun.

I'm down for just about any Keanu Reeves movie, but this one might rank even higher than The Matrix (Problematic film take? Maybe—but that's okay). First off, he's paired up with Sandra Bullock in her breakthrough role as Annie Porter, a passenger on a bus with a bomb rigged to it that'll explode if the bus goes below 50mph. Jack Traven (Reeves) is an LAPD SWAT officer who jumps into action and attempts to disarm the bomb. It's got almost as much speed as Top Gun does (okay, maybe a little less), but overall, it definitely has that same thrill factor that Top Gun has going.

Who's in It: Bruce Willis, Liv Tyler, Ben Affleck

While Maverick isn't technically doing any world-saving in Top Gun, the stakes are almost as high as they are in Armageddon. Bruce Willis is Harry S. Stamper, an oil driller who has been brought in by NASA to destroy an incoming life-ending meteor that's headed towards Earth.

Who's in It: Tom Cruise, Philip Seymour Hoffman

I realize that basically any Mission: Impossible could've fit in here, but Mission Impossible: III is by far the greatest out of the five that have been released thus far. This iteration catches Ethan Hunt (Tom Cruise) on a mission to retrieve the Rabbit's Foot, an ominous item of high importance to Owen Davian (Philip Seymour Hoffman).

Who's in It: Goldie Hawn, Eileen Brennan, Hal Williams

Top Gun and Private Benjamin are two films that dive deep into the process of getting into a new work groove, though I'd say that Judy Benjamin (Goldie Hawn) had a much rougher go at it than Maverick (Tom Cruise). Private Benjamin leans more so onto the comedy side of things, but all in all, there are a ton of the same themes going for both films.

Who's in It: Julia Roberts, Albert Finney, Aaron Eckhart

Much like Top Gun in that it shows the importance of both working together and alone, Erin Brockovich tracks the namesake character (portrayed by Julia Roberts) as she fights to ensure the safety of a California city after its residents are exposed to harmful chemicals. Working for a lawyer, Ed Masry (Albert Finney), at his law firm, Brockovich is able to piece together who and what is responsible for causing tons of residents to fall ill in Hinkley, California.

Who's in It: Jeff Daniels, John Goodman, Harley Jane Kozak

Maybe this one's a bit of a stretch, but in both Top Gun and Arachnophobia, someone's trying to push past their fears and come out the other side as a different person. For Jeff Daniels' character in Arachnophobia, it's getting over his fear of spiders, and for Tom Cruise's character, it's about moving past the death of Goose and trusting himself to fly again.

Listen, I realize that Top Gun is a movie about fighter jets and this one is about a group of women playing baseball, but the two are more similar than you might think. For one, they're both about a group of people attempting to defy the odds in pursuit of one common goal; and two, both have one somewhat arrogant character who softens up as the movie progresses. Oh, and Madonna plays an Italian baseball player who drugs their older team chaperone in order to go out and dance.

Who's in It: Dennis Quaid, Jake Gyllenhaal

First off, it's pretty rude that Rotten Tomatoes would rank this perfect gem of a movie at 45%, but despite that, The Day After Tomorrow has that same "leave it all on the field" vibe as Top Gun. It's got Dennis Quaid trekking across the country in sub-zero temperatures to find his son and Jake Gyllenhaal swimming through dirty subway water—what's better than that?

Bordering more so on the thriller genre, The Perfect Storm portrays a crew's dedication to survival as their fishing vessel gets caught right in the center of the Perfect Storm of 1991. Lost at sea, the crew has to figure out a way to re-orient themselves and make it out of the storm alive, much like how Maverick had to get himself back on course after the death of Goose in Top Gun.

Who's in It: Bruce Willis, Alan Rickman, Bonnie Bedelia

Sure, Die Hard has been considered a Christmas movie before, but it's also got some themes going on that are a bit like those in Top Gun. Bruce Willis portrays a New York City detective visiting his estranged wife in Los Angeles, though things quickly take a turn for the worst when a terrorist attack occurs and he gets caught in the middle of things.

Who's in It: Tom Cruise, Dakota Fanning

Okay, maybe there weren't any aliens in Top Gun, but there was Tom Cruise—and quite a bit of fiery-explosion action going down. In a remake of the 1953 film of the same name, this iteration of War of the Worlds definitely hits harder than the original. Little stabby things emerging from massive alien ships and piercing people through their stomachs? Yeah, I don't think that was in the original film.

Who's in It: Susan Sarandon, Geena Davis

Much like Maverick and Goose, Thelma (Geena Davis) and Louise (Susan Sarandon) had quite a bit on the line as they traveled across the country, evading the police after Louise killed a man who was forcing himself on Thelma. Top Gun is all about teamwork, and there simply would not be a Thelma without a Louise. And technically there is some flying at the end of this one.